In the1890s a rush of Dutch Colonial Revival buildings began appearing in Manhattan as architects drew on the city’s historical roots. On West End Avenue in 1891 construction began on the West End Collegiate Church, modeled after a butcher’s guildhall in Haarlem and, concurrently, McKim, Mead & White designed a series of residences in a similar style on the Upper West Side.


Around the same time the townhouse of Dr. John A. McCreery and his wife was built at No. 18 West 37th Street. Their five-story home was of the latest design. Clad in iron spot brick, it featured a tall stepped gable in front of a steep mansard roof. Terra cotta ornamentation included two panels of wreaths, tied with a bow, on either side of the fifth floor window, and a tall finial rising from the peak of the gable.

Intricate brickwork played out in courses at each floor and long, thin bricks fanned out on end to form pseudo-lintels over the windows as a thin, highly decorated terra cotta inset thrust up the center of each one.

On either side of the mansard, stepped gables finished off the roofline.

The eminent Dr. McCreery was a visiting doctor of Saint Vincent’s Hospital and a member of the University Club. Mrs. McCreery was active in both social and philanthropic endeavors; in 1895 offering the house as the “headquarters” of the Clothing Fund Association – a charity formed by well-to-do women to supply clothing to sick, poor children in the tenement districts.

While the 37th Street neighborhood remained exclusive, change was occurring a block away on Fifth Avenue. William Waldorf Astor’s brownstone mansion had been razed in 1890 to be replaced by the Waldorf Hotel; followed soon after by Caroline Astor’s famous residence next door. By 1897 the combined Waldorf and Astor Hotels spanned the entire block from 33rd to 34th Streets, initiating a gradual metamorphosis of the Avenue from one of millionaires’ mansions to commercial enterprise.

In 1898 the McCreery’s moved to 20 East 54th Street and rented the house to another physician, the wealthy Barnard MacKay and his family.

While living here the MacKays entertained sumptuously. On December 15, 1901 Mrs. Mackay gave a reception for debutante Mary Gansevoort Edwards. “The reception was a small one for debutantes and the young married set,” noted The Times.

The family included sons Archibald W. and Richard T., as well as the young Margaret Auchmuty Mackay, known in society as Meta. Later wealthy New York socialites would be shocked when George H. Morgan, the nephew of Pierpont Morgan, suddenly broke his engagement to Meta and married the daughter of a wealthy Japanese merchant.

In 1904 Dr. Mackay was killed when he was hit by a fire engine and a year later Mary Christina Mackay died.

By now the tone of the neighborhood had changed decidedly as business crept onto the side streets from the avenues. In August of 1908 August Miller owned the house when he granted a long term lease to William A. Pond & Co., a seller of music and musical instruments.

No. 18 West 37th Street would never again be the home of wealthy families and the site of glittering entertainments.

On May 15, 1922 the real estate firm of Price, Birkner & Johnston leased the entire building. In the meantime, the rowhouses along 37th Street gave way to massive loft and office buildings. Astonishingly, the house remained.

By the middle of the 20th Century a two-story commercial front had been slapped on the façade and the basement and parlor floors of the house were gutted for retail operations. 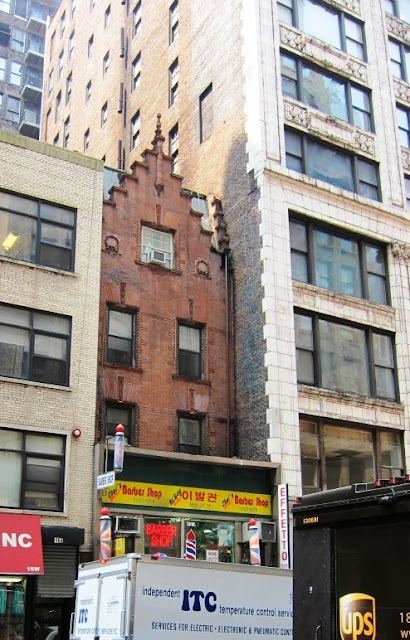 Today garish signs advertise a wholesale clothing store and where Mrs. McCreery once served tea from a silver tray a Korean barber shop does business.

But rising above, the upper three stories of the Dutch Colonial townhouse remain intact; a remarkable reminder of a gentile residential neighborhood on a now-gritty industrial street.

photographs taken by the author
Posted by Tom Miller at 3:08 AM