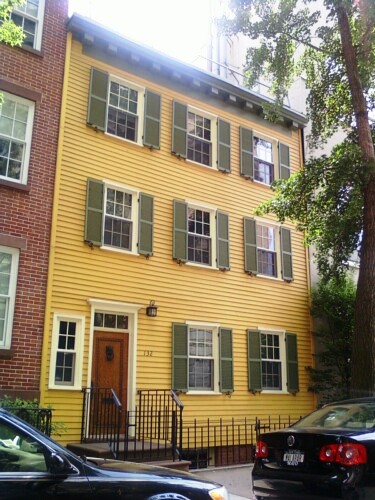 Before 1825 when the devastating outbreak of cholera forced hundreds of panicked New Yorkers to flee the claustrophobic conditions downtown, the Village of Greenwich was a sleepy semi-rural community.
Matthew Armstrong, a carpenter, was one of the residents here and around 1819 he built a small, two-story wooden home with a co-owner at No. 132 Charles Street.  Armstrong’s carpentry skills were evident in his broad, clapboard home with a modest but handsome door frame and simple overlight.

With the influx of new residents after 1825 the neighborhood, and indeed all of Greenwich Village, changed.   Two new piers were constructed in 1828 at the foot of Charles Street and neighboring Christopher Street. (both streets traced their names to Charles Christopher Amos who had owned the land).  A year later the state abandoned the mammoth Newgate Prison on Christopher Street and began planning the Weehawken Market in its place which would operate until 1844.

In 1845 Nash, Beadleston & Co. opened a brewery in part of the old prison, and before long there would be a coal yard across the street from No. 132.

John and Levi Springsteen owned the house in 1853 when a third story was added.

The flood of unappealing businesses in the immediate area – a soap plant, an iron works and a lime shed, for instance – made the Charles Street area a decidedly undesirable residential neighborhood by the end of the Civil War.  Most of the homes along Charles Street became boarding houses or were converted for commercial purposes.


Although in 1897 little had changed in the blocks near the riverfront, the grand Beaux Arts style Charles Street Police Station was erected, offering some dignity to the neighborhood.   And as the 20th Century progressed and Greenwich Village became the new Bohemia for artists and poets, conditions generally improved.

At some point well-intentioned owners slathered No. 132 with a coating of stucco in an attempt to modernize the façade.  In 1998 a gut renovation was done on the venerable structure and, in 2005, the stucco was removed, reproduction wooden clapboards were installed and the stoop, which had been bricked over, was restored.

The little wooden house that Matthew Armstrong built for himself nearly two centuries ago is a rare and delightful surprise on a street that is unquestionably no longer undesireable.

photograph by the author
Posted by Tom Miller at 2:55 AM