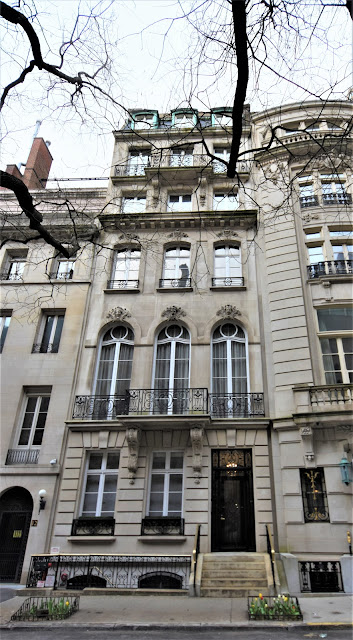 The family of Isaac S. Platt had lived in the 25-foot wide brownstone house at No. 10 East 62nd Street since its construction in 1880.  The president of Adriance, Platt & Co., manufacturers of harvesting machines, he and his wife, the former Mary jane Redfield, had two sons and two daughters.  Platt died in the house on November 15, 1904 at the age of 70.
At the time of Platt's death, the high-stooped brownstones along the block had become architecturally outdated.  In May the following year Edmund Lincoln Baylies purchased No. 10, demolished it, and hired the firm of Hoppin, Koen & Huntington to design a modern mansion on the site.
Two years after construction began the house was completed.  The architects had created a six-story, limestone-faced Beaux Arts palace.  Above the rusticated base three sets of tall, French windows opened onto a full-width iron-railed balcony.  Each of their frothy keystones took the form of a carved face.  An almost identical balcony graced the fifth floor.  The design was capped by a slate-shingled mansard with copper-clad dormers. 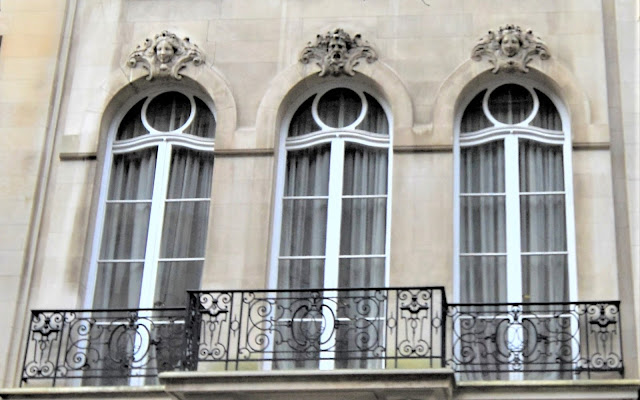 On November 25, 1907, the New York Herald announced, "Mr. and Mrs. Edmund L. Baylies have taken possession of their new residence, No. 10 East Sixty-second street," noting that it "is one of the finest in that section of the city."
The Baylies' American pedigree was impressive.  Thomas Baylies arrived in America in 1737 and Edmund's relatives included Livingstons and Hamiltons.  His wife was the former Louisa Van Rensselaer, whose family was among the oldest and most prominent in New York. 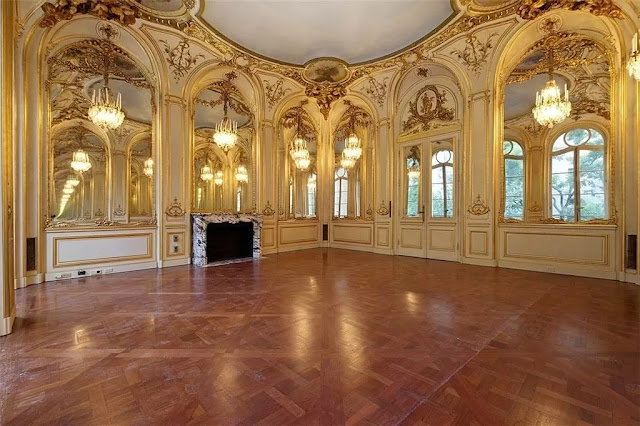 The ballroom -- photo via zillow.com
A partner in the legal firm of Carter, Ledyard & Millburn, Baylies focused on real estate.  Soon after moving into his new house he began remodeling brownstones along the block into mansions as lavish as his own.
Louisa's entertainments were lavish.  On February 19, 1915, for instance, the New York Press reported, "Mrs. Edmund L. Baylies entertained forty guests at dinner last evening in her home, No. 10 East Sixty-second street."  But her attention soon turned from dinner parties and receptions to relief work as World War I devastated France.
European soldiers lost limbs, were blinded, and otherwise disabled in battle.  Louisa set out to provide them with a means of income after the war.  She organized the American Committee for Training in Suitable Trades the Maimed Soldiers of France and served as its chairman.  Her work for the cause was indefatigable.  The Sun reported on November 1, 1917, "To this one organization Mrs. Baylies has devoted all of her time since soon after the beginning of the war and has raised large amounts of money, with which schools have been established in Paris and other French cities.  There French soldiers are taught trades that will enable them to support themselves and their families."  In appreciation, on October 31, 1917 the French Government honored Louisa with the Legion of Honor.
The end of the war did not mean the end of Louisa's work.  On November 15, 1919, the New-York Tribune reported that she and Edmund had sailed for Europe "to spend three months abroad."  It was not totally a pleasure trip.  "She will inspect five new trade schools which her committee has established in and near the French capital," said the article. 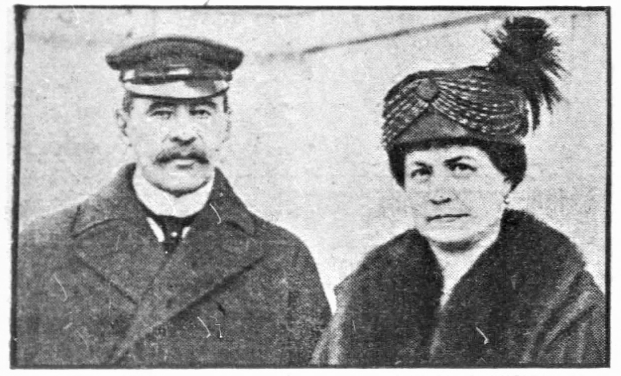 Edmund and Louisa were snapped at the pier on January 22, 1922 as they returned to New York after a two-months trip through England.  Daily News (copyright expired)
Edmund Baylies's first health scare happened in 1918 when it appeared he may not recover from pneumonia.  Newspapers published regular updates on his condition.  Then, on January 5, 1919, The New York Times reported, "Edmund L. Baylies, who has been critically ill with double pneumonia at his home, 10 East Sixty-second Street, is slowly recovering.  Yesterday he and Mrs. Baylies left for the Virginia Hot Springs."
In 1931 Edmund began experiencing what The New York Times described at the time as "a general decline in health."  He and Louisa spent that winter season in Cannes, France "in the hope of improving his condition," according to the newspaper.  On April 29, 1932, two weeks after they returned, Baylies died in the 62nd Street mansion at the age of 74.  Within two weeks the New York Evening Post reported, "He left all his personal effects outright to his wife, Mrs. Louisa Van Rensselaer Baylies...and the remainder of his estate to her in trust." 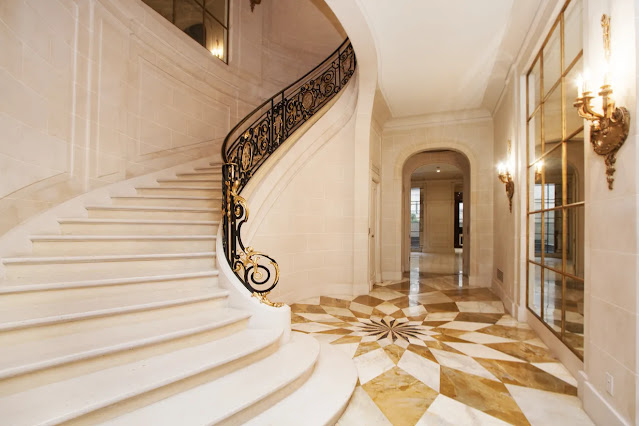 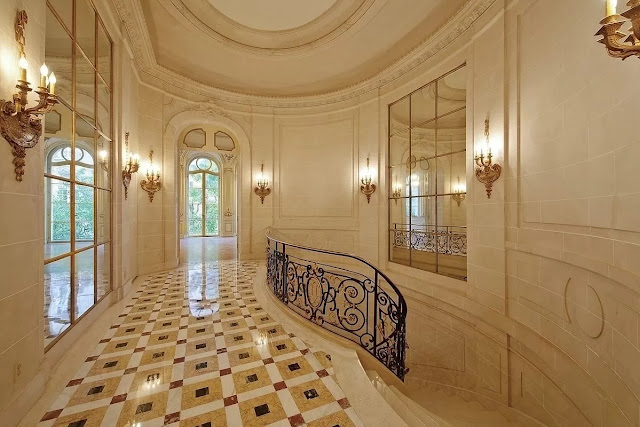 photos via zillow.com
Louisa did not remain in the 62nd Street mansion for long, selling it to George Washington Kavanaugh and his wife, the former Maria Miller Haberle.  The couple's summer home, Ocean Edge, was in Spring Lake, New Jersey. 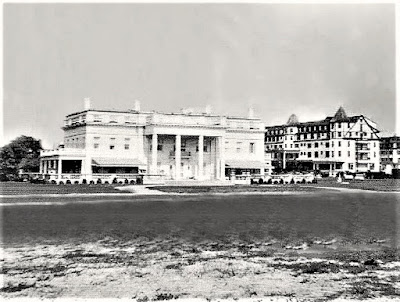 Ocean Edge was built in 1910.  original source unknown
Maria was the widow of brewer William Henry Haberle and had two daughters, Virginia and Leonora, from that marriage.  Although Kavanaugh was a millionaire businessman and former politician (he served in the State Assembly in 1897-98), it was Maria who stole the social spotlight.
On October 17, 1936 Maria returned home to discover a $10,000 pearl necklace was missing.  (The value would be closer to $135,000 today.)  It was the first of a nine-day period during which "she found some other article missing almost every day."  She reported the missing items--now amounting to $25,000--to the insurance company and an investigation was begun.  Maria launched her own probe and on November 27 The New York Times reported, "she found many missing articles, including silver, a valuable gold seal and clothing, hidden in closets."  As was the case in so many paperback mystery novels, the butler did it.
Maria's closest friend was Lady Decies, the twice-widowed "penny princess" born Elizabeth Drexel in Philadelphia.  She married John Beresford, the 5th Baron Decies in 1936.  When Lady Decies was in town, the two were nearly inseparable.
On February 5, 1938 the New York Post reported that Lady Decies had arrived on the Normandie the previous morning.  "With her French maid she went immediately to the residence of Colonel and Mrs. George Washington Kavanaugh at 10 East Sixty-second Street, where she will make her home during her brief say in New York."  The following day The New York Times reported "Mr. and Mrs. George Washington Kavanaugh gave a large reception yesterday afternoon at their home...for their house guest, Lady Decies," and on February 11 the newspaper wrote, "Mrs. Leonara H. Warner gave a dinner last night at the home of her mother, Mrs. George Washington Kavanaugh, 10 Eat Sixty-Second Street, for Lady Decies, the house guest of Mr. and Mrs. Kavanaugh.  Later the party went to the El Morocco."  The whirlwind continued the next day when Maria hosted a luncheon at the Ritz-Carlton. 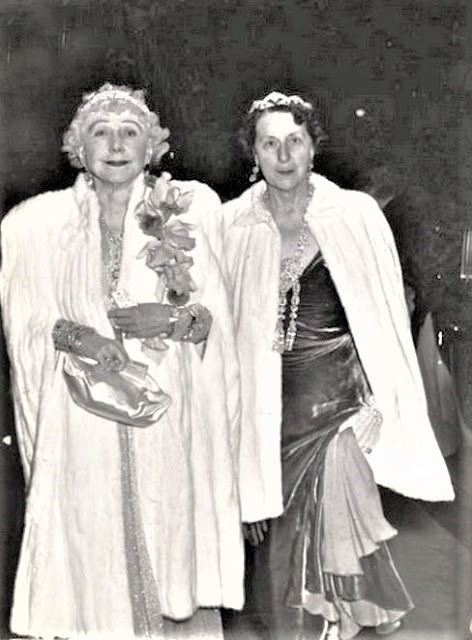 Maria Kavanaugh and Lady Decies arrive at the Metropolitan Opera on opening night 1943.  photograph from The Critic
On May 1, 1942, the Detroit Evening Times hinted that the Kavanaughs were considering moving to Beverly Hills.  "For several years past Mrs. George Washington Kavanaugh has passed up the mid-winter social season on Manhattan Isle in favor of a holiday in the vicinity of Los Angeles."  The writer noted, "It would be a suitable background for Mrs. Kavanaugh, who has a showplace at Spring Lake, N.J., and who, several years ago, purchased the stately mansion at 10 East Sixty-second street for her metropolitan headquarters."
In a catty aside, the journalist took a swipe at Louisa Baylies.  "The East Sixty-second street house formerly belonged to the once social Mrs. Edmund L. Baylies, born to superior New York social prestige as Louisa Van Rensselaer, and who now, late in life, is in what is politely known as 'reduced circumstances.'"
The Kavanaughs, along with Leonora and her family, remained in New York, however.  The wedding of Leonora's son, William Whiteside Warner, to Kathleen Berryman McMahon took place in the Church of St. Thomas More on June 14, 1951.
Three months later, on September 6, 1951 George Washington Kavanaugh died at the age of 89.   Maria survived him by three years, dying in January 1954 at the age of 87.  The Miami News noted, "she attended at least 30 openings of Metropolitan Opera seasons." 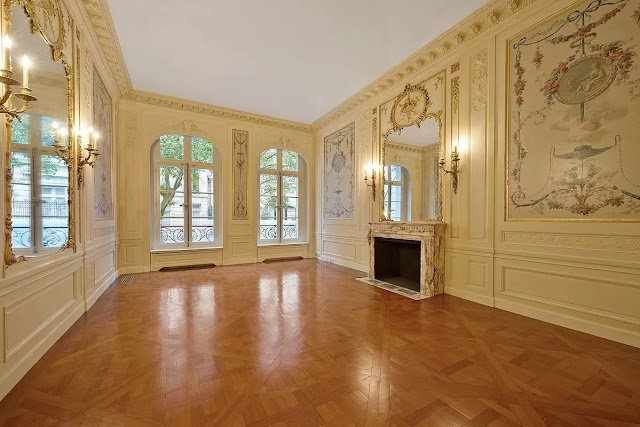 photo via zillow.com
In 1973 the Fleming School purchased the mansion for $4 million.  Alterations, completed in 1974, converted the interiors to classrooms.  As was the case with other exclusive private girls' schools, however, much of the opulence of the former mansion was carefully preserved.  The school remained until 1994 after which the house was converted to three apartments, a triplex and two duplexes.  The triplex was put on the market in 2020 for $55 million. 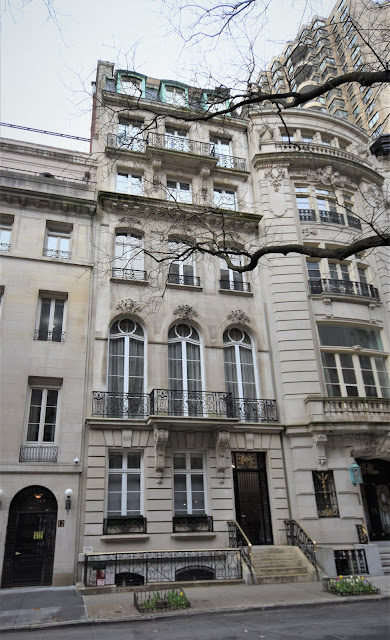 photographs by the author
LaptrinhX.com has no authorization to reuse the content of this blog
Posted by Tom Miller at 1:24 AM