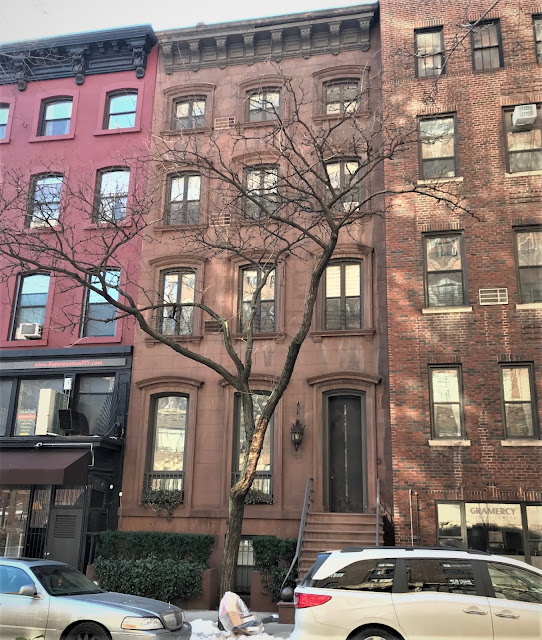 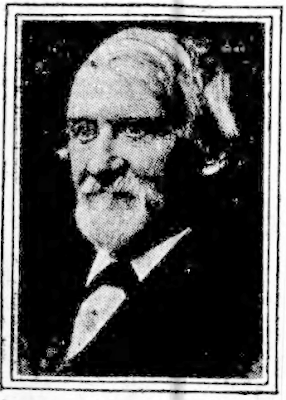 Bernard G. Amend New York Herald, April 7, 1911 (copyright expired)
Bertha died in the house on February 2, 1903 at the age of 80.  At the time only Robert was still living in the house with his parents.
In 1904 Adolph's wife died and he and their daughter moved into the home of his widowed mother-in-law, Pauline Drastler, at No. 59 West 87th Street.  Then, in February 1910, he remarried and brought his new wife and daughter to No. 120 East 19th Street.  Things were working out well for Adolph and his family, but uptown Pauline Drastler was emotionally devastated.  The New York Times said Adolph's marriage "seems to have grieved Mrs. Drastler."
On July 31 Adolph received a letter from Pauline "telling him of her intention to commit suicide," as reported by The New York Times.  By the time it arrived the 62-year old had already died by inhaling gas.  A reporter arrived at the 19th Street house that evening and spoke to the new Mrs. Amend.  The New York Times said simply, "Adolph Amend, the son-in-law of the dead woman, could not be seen."
In February 1911 Bernard Amend hired architect James Spence to install an elevator in the house.  The expensive project, costing more than $83,000 in today's money, was no doubt a result of Amend's advancing age.  He would not have the opportunity to use it very much, however.  He died in the house on April 6 of "infirmities to age," according to the American Druggist and Pharmaceutical Record, at the age of 90.
The Amend house soon became a high-end rooming house.  Among the earliest and most colorful residents was Ida Minerva Tarbell, who moved in around 1913.  By then Tarbell already had a brilliant career.  Educated in the Sorbonne, she was hired by McClure's Magazine in 1894.  Her series for that magazine, "The History of the Standard Oil Company," was perhaps her first investigative reporting and it contributed to the breakup of that monolithic firm, found to be in violation of the Sherman Antitrust Act.
With World War I raging, No. 120 East 19th Street became the Red Cross House for Nurses in September 1918.  The News Letter published by the American Red Cross explained it was "where recreational facilities will be provided for the Army, Navy and Red Cross nurses passing through New York...It will be arranged as a clubhouse, and will be fitted up with lecture rooms, writing rooms, reading rooms and sleeping quarters."
Through it all, Ida M. Tarbell retained her rooms.  During the war she served on President Woodrow Wilson's Women's Committee on the Council of National Defense. 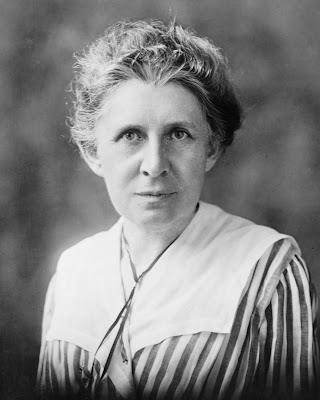 Ida M. Tarbell from the collection of the Library of Congress
The Red Cross left No. 120 following the end of the war, but Tarbell stayed on for decades.  She became part owner and publisher of The American Magazine and was a prolific author.  Among her works were eight books on Abraham Lincoln.  In 1921 she was appointed a member of President Warren G. Harding's Unemployment Conference.
Ida Tarbell was working on her autobiography, All In The Day's Work, in 1937.  That year, on November 4, a reporter from The New York Times visited her here.  He opened his article (which appeared the next day on her 80th birthday), saying "Ida M. Tarbell, biographer of Abraham Lincoln and historian of the Standard Oil Company, sat yesterday in the old-fashioned apartment at 120 East nineteenth Street."
She told him that she was enthusiastic about Franklin Roosevelt's New Deal, but was worried that he "has probably gone too fast and undertaken too comprehensive a program, for she pointed out that the government can move no more quickly than it can educate the people towards its aims."
Tarbell moved permanently to her summer home in Bridgeport, Connecticut in 1940.  She died in the Bridgeport Hospital on January 6, 1944 at the age of 86.
At some point the stoop was removed from No. 120 East 19th Street.  Rather amazingly, at a time when Victorian detailing was routinely shaved off, none of the crisp window enframements were destroyed. 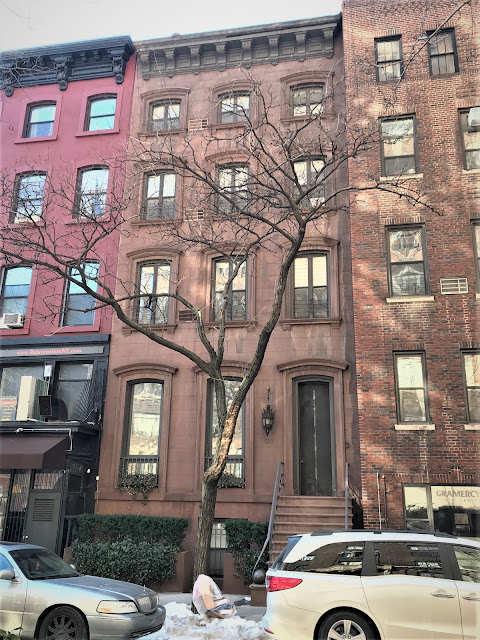 A renovation completed in 2000 resulted in the stoop being restored.  There were now a duplex apartment in the basement and parlor levels, two apartments each on the second and third floors, and another duplex on the fourth and new penthouse level (unseen from the street).
photographs by the author
Posted by Tom Miller at 1:19 AM