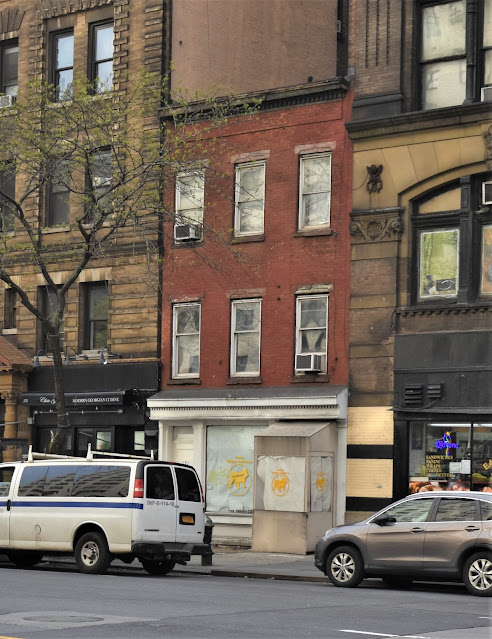 Around 1845 a three-story brick house-and-store was erected at 171 Third Avenue, between 16th and 17th Streets.   The Greek Revival structure was capped with a simple dentiled cornice, but its brownstone lintels gave it a touch of elegance with their graceful ogival-type Gothic arches.
The upper floors became home to the blue collar Worster family.  Jacob Worster made his living as a blacksmith and John was listed as a locksmith.  (They most likely worked together in a single business.)
As was common at the time, in the rear yard was an ancillary structure which, by 1847, was home and shop of tailor George Schleicher.  In 1853 another tailor, Frank Schaeffler listed his address here, and in 1856 the men were joined by Henry Fischer, also a tailor.
In the meantime, the store in the main house home was to J. O'Neil's pharmacy.  He moved his business to University Place in 1852.  Two back-to-back advertisements appeared in the New York Herald on May 10 that year.  The first read, "To Druggists--A Drug Store, located in one of the best thoroughfares and doing a good business, for sale," and the second offered, "To Physicians--For Sale--A physician's wagon, in good running order, Built by Wood & Co., Cost $250; will be sold cheap for cash."
The business was purchased by druggist John Williams, who remained until 1856.  That year the space was converted to a saloon.  The proprietor, it seems, took on too much in opening what was apparently one of several businesses.  On December 29, 1859 he advertised, "For Sale--The lease, stock and fixtures of a liquor store in good neighborhood well fitted up, in consequence of having other business to attend to."
It was purchased by John Hayward who renamed it the Hayward House.   Known as "Jack" or "Darkey," Hayward was a volunteer in the 79th New York Infantry Regiment, formed just prior to his purchasing the Third Avenue business.   The regiment was organized to defend Manhattan, but was, in fact, busier with providing parade and guard duty for visiting dignitaries.
That all changed on April 12, 1861 when rebel troops fired on Fort Sumter.   It seems that going to war was something Hayward had not counted on when he signed up for a five-year term of duty.  Yet, he initially seems to have accepted his fate of marching off to battle.  On October 2 that year an advertisement appeared in the New York Herald:

Hayward House, No. 171 Third Avenue--The lease, stock and fixtures of the above named house; for sale to a business man; it will be a good investment.  To be sold at a sacrifice for cash.

It was purchased by Frank Rimington who retained the saloon's name and continued to market it as a high-end business.

Trow's New York City Directory, 1864-1865 (copyright expired)
But it seems that John Hayward was seriously rethinking his military obligations.  On October 12, 1861, just a week after he placed the saloon for sale, a "Special Notice" appeared in the New York Herald.

The renowned Jack Hayward, alias Darkey, of the Hayward House, 171 Third avenue, is to carry a placard of the Seventy-ninth regiment, one before and behind him, from corner Eighth street and Third avenue to Thirty-second street, for a wager, between 12 and 1 o'clock to-day.

He was willing to pay a great amount of money to get out of his service.  On March 17, 1863 he placed an advertisement in the New York Daily Herald that read: "A man wanted to service in a Regiment--With all the privileges of an old member, which has been out two years, with one more to serve.  A bonus of $50 will be given.  Apply at 171 Third avenue.  Hayward was offering the equivalent of $1,000 in today's money to anyone who would take his place. 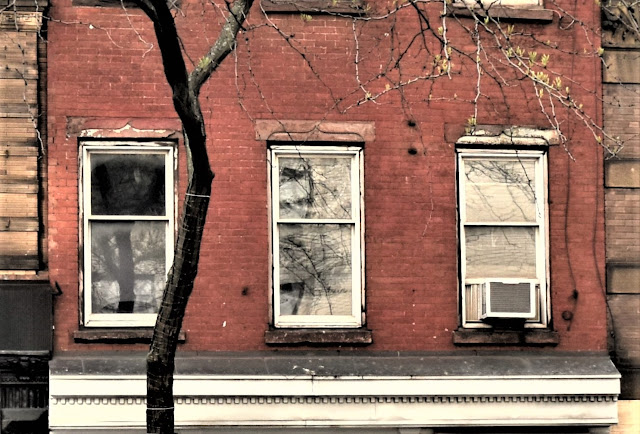 Graceful ogival-type Gothic arches adorn the lintels.
In 1861 the Government issued the first $5 bill, known as a Demand Note.  Edward Dewey handed one to Frederick Rimington in October 1862.  Rimington was uncomfortable accepting it, but, according to The New York Times, Dewey said it was all he had.   And sure enough, when Rimington took it to the bank, he was told it was a fake.  It was not a small loss for the saloon-keeper, equal to about $130 today.   Dewey was arrested on October 4 and charged with counterfeiting.
Rimington operated the Hayward House through 1868 when he sold it the business to Thomas Oakley.  The neighborhood was now on the northern fringe of what was known as Kleindeutschland, or Little Germany, and Oakley renamed it Germania Hall, an "oyster and dining saloon."
The back room was used as a meeting place for local organizations.  It would not be Germans, but Irish-born New Yorkers who filled the room on January 15, 1871.  After years of political imprisonment, on January 5 the Irish Government had released members of the failed 1867 Fenian Rising.  The New York Times reported that, "A large and influential meeting of delegates...of the United Irishmen of New-York" had meet in Germania Hall to arrange "a hearty welcome to the released Irish political prisoners."
In Victorian prose, the group's resolutions said in part, "Some of the bravest and best of those who have periled all for Ireland, and suffered all that the perverted ingenuity of their enemies could devise, are soon about to arrive in our midst...It is but right and just that they should be tendered a reception commensurate with the extent of their sufferings."
Perhaps surprisingly, the rear building still held a tailor shop, now H. Hinkel & P. Hessler.  As George Schleicher had done, one of the partners, Henry Hinkel, lived in the building.
In 1879 the former saloon space became the upholstery shop of Basler & Bischoff.  By 1886 the partners had opened a second location around the corner at 200 East 16th Street.
An employee, Joseph Walsh, made a disturbing discovery on April 19, 1891.  The Evening World reported, "It was just 7 o'clock last night when Joseph Walsh, an upholsterer, of 171 third avenue, accosted Policeman Frank Nugent, of the Sixth Precinct, on Pearl street, and told him that a man was lying dead in the stone-flagged alley at 20 Mulberry street."
The "medium-sized laboring man" was 36-year-old bricklayer Thomas Donigan.  He had died from "an ugly gash across the right side of his head."  The police theorized that "he got into a row with some Italians and was by them assaulted."
The upholstery shop became a cigar store within two years of the incident.  But its proprietor, M. E. Odell, was making more money on gambling than on selling cigars.  Policy games were illegal lotteries, later known as the number racket.  The games preyed on low-income persons who dreamed of quick riches.  On September 19, 1893 The Evening World reported, "For several days complaints have been lodged at the Tenth Precinct Station to the effect that a police shop was running at 171 Third avenue."
Detectives descended on the shop on the night of September 18.  The Evening World explained, "The front part of the place is ostensibly a cigar store.  The only way out of the backroom is by a narrow passage and two windows."  When the officers entered the store, the gamblers and operators in the rear panicked.  "When the detectives reached the back room, they found each window clogged up by men endeavoring to escape."  Along with the arrests, the newspaper reported that "a large number of policy slips and a quantity of gambling paraphernalia were seized."
As the neighborhood changed, the store saw a variety of tenants.  Shortly after the raid it became the office of Charles Greenbaum's plumbing business.  He moved further up Third Avenue in 1905.  He was followed in the space by Dr. A. F. Johnson's veterinary office, and by 1922 it was the real estate office of "poet and real estate agent" Thomas Ford.  Ford would sell real estate and insurance from the space at least into the mid-1950's.
In 2007 Kelli Bernard opened Amai Tea and Bake House in the store.  The New York Times' food critic Florence Fabricant commented on November 28, "A brick-walled oasis, it serves high-quality teas and drinks like frothy green-tea latte and green tea cupcakes."  The space was most recently home to Jack's Sliders and Sushi. 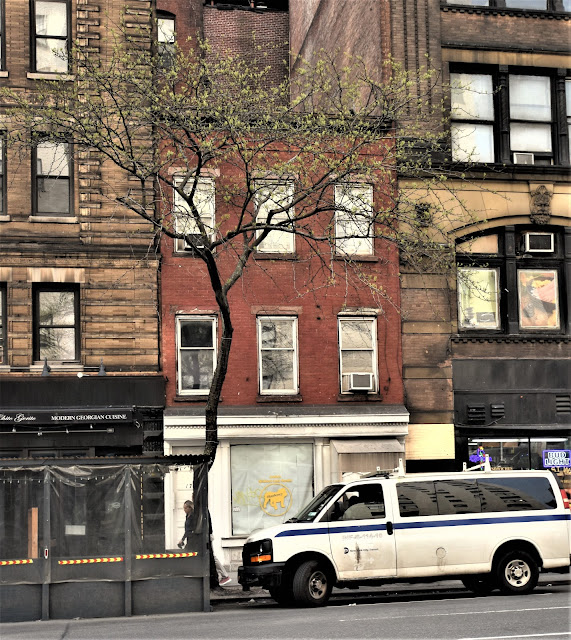 The sole surviving relic of the early 19th century along the block, the little building's modest appearance disguises its colorful history.
photographs by the author
no permission to reuse the content of this blog has been granted to LaptrinhX.com
Posted by Tom Miller at 1:10 AM