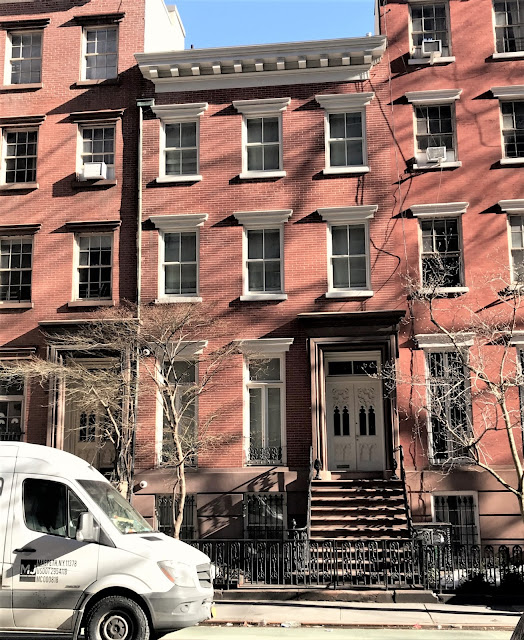 Born in 1781, Elizabeth Robertson Walsh was the wife of affluent broker James Walsh.  She had a fortune of her own and invested heavily in Greenwich Village property.  Her daughter, Mary Robertson Walsh, married Henry James and their son, Henry James, Jr., would go on to become one of America's greatest novelists.
In 1828 Elizabeth purchased building plots along the northern side of West 12th Street, between Sixth and Seventh Avenues from the heirs John Rogers.  She began construction on a row of identical merchant class homes on the site in 1851.
Among them was No. 53 (later renumbered 133).  Like its neighbors it was a blend of Greek Revival and the more recent Italianate styles, with a sumptuous Gothic Revival doors thrown in for good measure.  Italianate cast iron railings lined the areaway and stoop.  The earred brownstone entrance was purely Greek Revival, as was the understated modillioned cornice.  The floor-to-ceiling parlor windows were most likely originally graced by cast iron balconies.
By the late 1850's it was home to the Maximillian Weil family.  Born in Bavaria, Germany, Weil had come to America at the age of 17.  Known as Max, he and his wife, Matilda, were married in 1850.  They would have six sons--Edwin C., Louis J., Alfred, August M., Simon R. and Theodore G.--and two daughters, Fannie and Bella.  Weil was a partner with his brother Joseph in the dry goods importing firm of J. Weil & Brother.
Like all the women along the block, Matilda maintained a domestic staff.  In August 1865 she was looking for "A girl to do general housework and assist at washing," and two years later she sought "A cook for a private family.  One who has lived with a German family."
Burglars were well aware that well-to-do families spent the summer months in the country, away from the stifling city heat.  Those who did not leave a caretaker behind made their homes a tempting target.  But during the summer of 1878 Matilda was ill and the Weils were unexpectedly at home.
On August 9 The Sun reported, "Several houses within the limits of the Ninth Ward have been broken into lately, in the absence of the occupants in the country....At about 4 o'clock yesterday morning, Eliza Mead, a nurse girl, employed at 133 West Twelfth street, who was sitting up with her sick mistress, heard the sound of breaking glass."  She looked out the window and saw a man climbing into the house of Justin D. Hiscock through the smashed window.  He was followed by three others who had been hiding.
As soon as they disappeared Eliza ran to the street to find a policeman.  Two officers "entered the house, and, after a search, found the four men hidden away in the attic.  The burglars were easily captured, for they had no firearms about them."  Eliza Mead was hailed a hero.
In 1882 Max Weil retired.  Oddly enough, while his sons went into the importing business, they had not joined their father's firm and with Joseph Weil already dead, the firm was now closed.
Belle was married to David Hochstadter, a member of the wholesale clothing firm Hochstadter Brothers on the evening of December 17, 1884 in Delmonico's.  Her brothers served as ushers and The New York Times noted, "After the marriage service the guests sat down to a fine collation."
Max Weil died in the West 12th Street house on April 8, 1887 at the age of 67.  His funeral was held in the parlor two days later.  The New-York Tribune remarked, "Only the immediate family and a few friends gathered around the coffin as the last rites of the Jewish faith were performed."
Matilda continued to live in the house with her three unmarried sons.  Albert Weil was 21-years old at the time of his father's death, and August was 26.
In 1890 Albert was attending the Columbia College Law School, but was suffering from a spinal disease which caused a partial paralysis.  The Sun said of him, "His habits seem to have been unexceptionable and his family say they know of no love affair."  His medical condition, however, was more troubling to him than the family realized.
At around 1:00 on the afternoon of March 20, 1890, he left the house telling his mother he was going to a matinee.  He got out of his cab at Union Square and, according to The Press, "engaged another conveyance, ordering the driver to the Thirty-fourth Street Ferry."  There he purchased a ticket for Long Island City.
The Sun reported that he "trudged through the snow storm in Prospect Park, Brooklyn...and shot himself through the heart after reaching Lookout Hill, one of the highest points in the Park."  His "well-dressed" body, as described by The Press was brought to No. 133 West 12th Street, "whence the funeral will take place this afternoon," said the article.  The Press added "The family is well known in Hebrew circles."
Matilda received another shock two years later.  August M. Weil spent that summer the fashionable resort of Saratoga, New York.  Almost assuredly his mother accompanied him.  He shockingly died in the Kensington Hotel there on August 2 at the age of 41.
Matilda died on October 4, 1900 and Theodore sold the house to Anna S. Wilner and her husband, Samuel, within the week.
Anna had graduated from the Women's Medical College of the New York Infirmary for Women and Children in 1895.  She was a well-respected physician and wrote articles like "Childbed Fever" which appeared in the New York Medical Journal in 1906.
The Wilners remained in the house until 1918, when Anna leased it as a rooming house.  When she sold it to Mrs. Leighton H. Smith in 1924, it was described by The New York Times as a "converted house," meaning that it now held apartments. 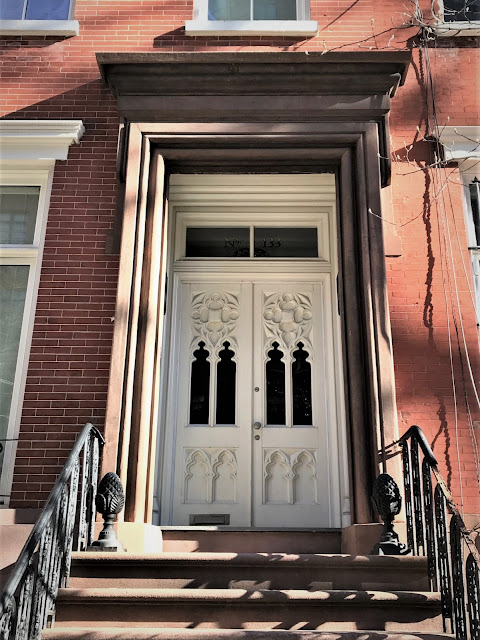 That changed in 2017 when plans were filed to restore the house to a single-family residence.  Much of its 1851 appearance survives, including the sumptuous Gothic Revival entrance doors.
photographs by the author
LaptrinhX.com has no authorization to reuse the content of this blog.
Posted by Tom Miller at 1:07 AM