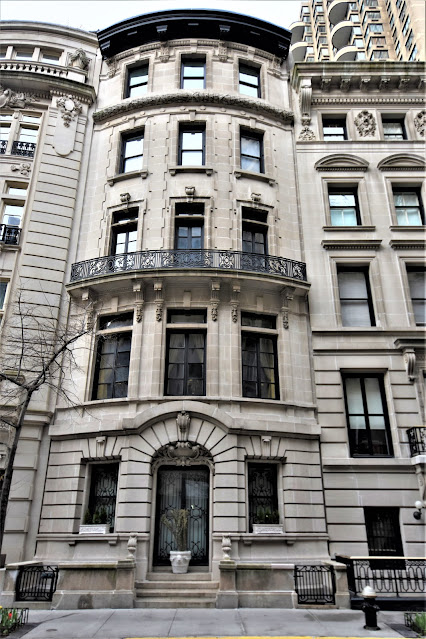 On August 7, 1898 the funeral of 53-year old Lavinia Newman was held in the high-stooped brownstone residence at 6 East 62nd Street where she and her husband, Henry, had lived since its erection in 1880.  Henry and his children left the house soon afterward, and June 15, 1901 the Record & Guide reported that developer brothers William and Thomas Hall "who have just purchased this property, will erect a 5-story American basement dwelling on the site from plans by Welch, Smith & Provot."
At the time many owners of outdated brownstones were initiating major renovations to modernize them.  But the firm of William Hall's Sons chose to start from scratch.  The result was a 27-foot wide, bow-fronted Beaux Arts mansion that rose five stories.  Its stately limestone facade featured a centered entrance within the rusticated base and a full-width iron-railed balcony at the third floor. 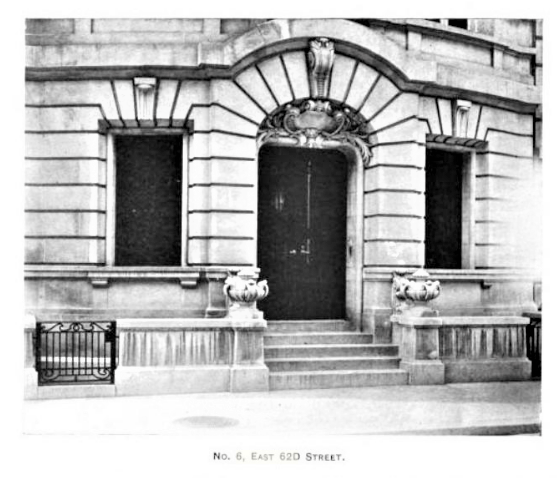 In its September 5, 1903 issue The American Architect & Building News represented the entrance as a "fine example."  copyright expired
William Hall's Sons sold the completed mansion to cotton  broker Daniel J. Sully on December 30, 1903 for a reported $300,000--just over $9 million in today's money.  In reporting on the sale Fibre and Fabric called it "one of the finest of the many high priced speculative residences built in the Fifth Ave. district in the past few years" and noted it "is furnished with an electric passenger elevator."
The Newburgh, New York Register reported that on Christmas Day 1903 Sully "presented to his charming young wife the house at 6 East Sixty-second street."  The title to the property, therefore, was placed in Emma Sully's name.
The couple had only recently moved to New York from Providence, Rhode Island.  Sully formed the cotton brokerage firm D. J. Sully & Co. with "sumptuous offices" on Exchange Place, as described by Munsey's Magazine.  The Register went further, saying the offices "are without exaggeration the most sumptuously equipped of all Wall street's splendid places of business."  It included bedrooms for staff who worked overnight and "a completely equipped dining room where the office force takes luncheons and where a chef secured from the Waldorf prepares their food."
Sully quickly made created a reputation for himself, The Ticker calling him "the Cotton King" and Munsey's Magazine deeming his business "perhaps the most spectacular of all big cotton operations."  It described him as "keen, shrewd, and resourceful, and inclined to mask his activities in mystery."
But the millionaire cotton man who had stunned the industry with his quick and massive gains would occupy the new mansion for a very short time.  On March 19, 1904 the Elizabeth Daily Journal reported, "With his losses reaching into the millions, Daniel J. Sully, the dethroned 'cotton king,' who was forced to suspend yesterday, came downtown this morning and begun [sic] at once to mend his broken fortunes."
With typical bravado, he assured reporters, "My failure is, of course, only temporary, and I shall be on my feet again soon.  It is a mistake to say that I have been hard hit."
But he was, indeed, hard hit.  On March 22, 1904 the Evening World reported that he, "showed emotion for the first time on leaving his office late this afternoon, after he had turned over his last cent to receivers."   The article noted, "The ex-Cotton King, it was said, has surrendered his handsome residence, No. 6 East Sixty-second street, and all of his worldly possessions."
In fact, because the property was in Emma's name, the couple managed to stay on for two years while Sully tried valiantly to reestablish himself.  Finally, in May 1906 the Fifth Avenue Art Galleries announced the upcoming auction of "the very valuable Sully Collection."  The listing said it "is rich in treasures from all parts of the world, many rare objects having been purchased at the sale of the ill-fated Empress Colotta's Collection."  Included were "choice porcelains, bronzes, miniatures, [and] marbles" purchased from Tiffany & Company.  Immediately following the auction of the artwork and furnishings, the "palatial residence" was put on the block.
The mansion was purchased by another newcomer to New York.  Roy Alvin Rainey and his wife, the former Bertha Andrews, had recently relocated from Cleveland, Ohio where Bertha's father, Samuel Andrews, had partnered with John D. Rockefeller in establishing the Standard Oil Company.  The couple had married on April 2, 1905 and they moved into the mansion with their infant son, Roy, Jr., born on April 29, 1906.
Rainey was an avid yachtsman and was already a member of the New York Yacht Club and Vice Commodore of the Larchmont Yacht Club when the family moved in.  The Rainey's summer estate was near Huntington, Long Island and, like many other millionaires, Rainey was also interesting in thoroughbred horses.  On April 22, 1906 the New-York Tribune reported he had paid $16,000 for the three-year-old old Sir Wilfrid--in the neighborhood of $470,000 today.
On October 31, 1907 the Brooklyn Daily Eagle reported, "Roy Rainey, the millionaire horseman and society man, has purchased from Richard F. Carman...his estate on Fort Hill, near [Huntington, Long Island], known as Carmandale.  It is a fine property of nearly 100 acres and overlooks the Sound and a large extend of upland."  The article noted that the sale included "most of the personal property, furniture, etc." and mentioned that this was Rainey's "second place on Fort Hill, which he has fitted up at a cost of many thousands of dollars." 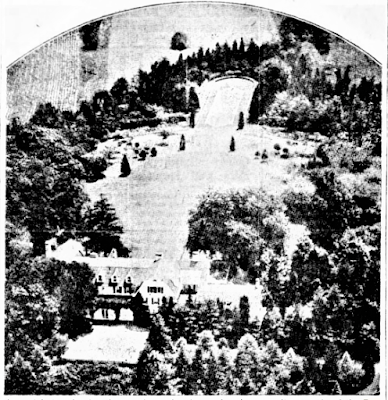 The Brooklyn Daily Eagle published an aerial view of the Long Island mansion and grounds on May 3, 1930 (copyright expired)
In 1908 the Rainey's initiated two renovation projects--one on East 62nd Street and the other at Carmandale.  In February they hired architect Collins Marsh to do $7,000 in "extensive improvements" on 6 East 62nd Street.  On Long Island workers remodeled the main house, demolished and relocated the stables, installed tennis courts and had the public road moved further away from the mansion.  While the projects were underway the Rainey's sailed to Paris on their luxurious yacht.
That would be the last trans-Atlantic crossing for that Rainey craft.  On August 25, 1908 The New York Times reported, "Roy A. Rainey's new steam yacht, Cassandra, arrived here to-day from Greenock, Scotland.  She is one of the largest steam yachts afloat, and her interior appointments rival in convenience and luxury those of any of the finest private yachts."  The 284-foot vessel was among the 12 largest yachts ever built, said the article. 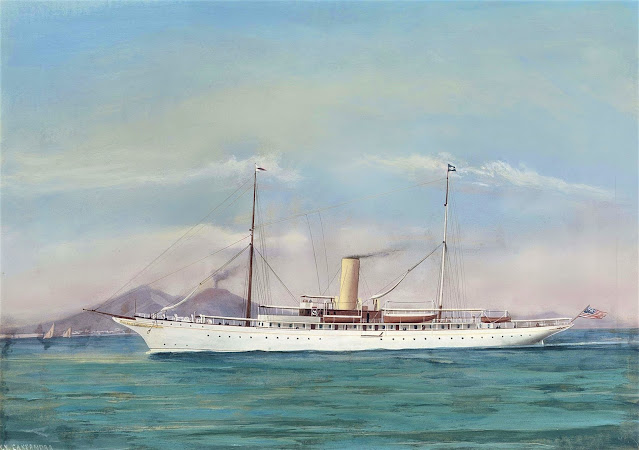 A portrait of The Cassandra was painted by Italian artist Antonio de Simone in 1909.
While her husband busied himself with yachts and horses at Carmandale, Bertha bred wire-haired fox terriers.  Her name appeared in newspapers for her show dogs perhaps as often as her husband's did for his race horses and boats.  On June 6, 1918, for instance, the New-York Tribune reported on the winners of the annual exhibit of the Ladies' Kennel Association of America.  Bertha and her dogs walked away with four ribbons.
Rainey acquired abutting properties until his Long Island estate totaled 400 acres.  It caught the eye of the Crescent Athletic Club of Brooklyn in the spring of 1930.  On April 13 the Daily News reported the club proposed that the estate "be acquired for a new country house site."
The following year the Raineys sold the Huntington estate to the club for $1 million (a significant $15.3 million in Depression Era money) and on April 8, 1931 the New York Sun reported that Bertha had purchased the penthouse suite at 25 Sutton Place.
They Rainey's had sold 6 East 62nd Street to the York Club, which hired architect John Hamlin to combine it internally with the former William A. Read mansion next door at 4 East 62nd Street.   Despite the renovations, the Department of Buildings noted the two structures were "separate buildings under the same ownership." 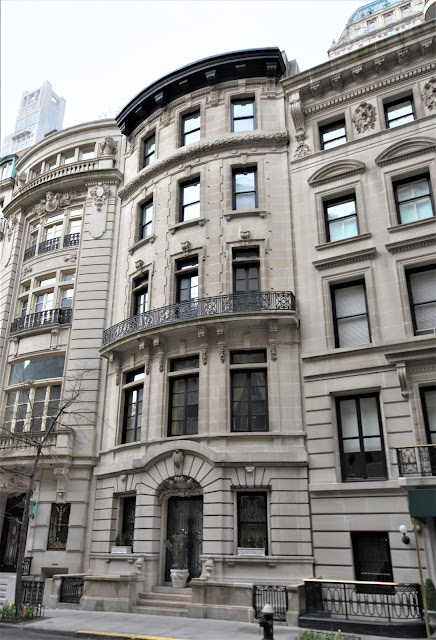 The club operated from the combined houses for decades.  Then a renovation completed in 1985 resulted in lavish duplex apartments known collectively as Curzon House.
photographs by the author
LaptrinhX.com has no authorization to reuse the content of this blog
Posted by Tom Miller at 2:34 AM