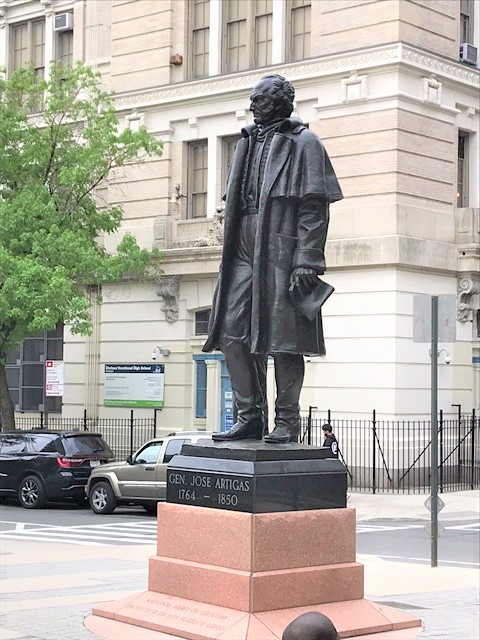 The extension of Sixth Avenue south of Carmine Street in 1925 left dozens of triangular plots where the new thoroughfare cut through existing blocks.  One of these, bounded by the avenue to the east, Spring Street on the north and Broome Street to the south, eventually earned the name SoHo Square.
Two decades later Sixth Avenue, at the prompting of Mayor Fiorello H. LaGuardia, was renamed the "Avenue of the Americas" to honor Pan-American ideals.   The renaming ceremony in October that year included a parade of 4,000 World War II veterans.  Colorful medallions--300 of them--depicting the coats of arms of Latin American countries were hung from the avenue's lampposts.
Within a few years two statues of Latin American  heroes--liberator Simon Bolivar and Argentine General José de San Martin--were moved to the entrance to Central Park at the head of the Avenue of the Americas.  They were joined by a monument to Cuban patriot José Julian Marti in 1965.  Two other statues would be installed along the route, those of Juan Pablo Duarte at Canal Street and  José Bonidacio de Andrada at the edge of Bryant Park.
SoHo Square got in on the act when the the Banco de La República del Uruguay and Carlos  Páez Vilaro announced their gift of a statue to General José Artigas to the city.  It would be the second cast of the larger-than-life bronze placed in front of the Uruguayan National Bank in Montevideo in 1949, created by sculptor José Luis Zorrilla de San Martin.
Born in 1764, Artigas was born into a wealthy, landowning family.  He became a military commander in 1897 and in 1810 joined the Junta determined to break Spanish dominion over Montevideo.  Named the Chief of the Orientales in 1811, he based his provisional government on the principals of the United States' founding fathers.  His government was overthrown in 1820 and he died in exile in 1850.  Nevertheless, his movement survived and eventually resulted in the First Republic of Uruguay.
The 11-foot-tall statue was cast in Uruguay in 1987, but it would be a full decade before its unveiling in SoHo Square.  Finally, on September 24, 1997, the dedication took plate.  The 2,640-pound work stands upon a pink granite base designed by Maria Cristina Caqulas.
The statue arrived at a troubling time for the Avenue of the Americas.  New Yorkers had never embraced the name change and had continued referring to the thoroughfare as Sixth Avenue.  La Guardia's grand scheme had lost any luster it originally had.  Writing in The New York Times on January 18, 1998, David Kirby noted, "When Sixth Avenue was officially renamed Avenue of the Americas in 1945, it was lined with colorful medallions bearing the coats of arms of the hemisphere's nations.  Now many are missing and those that remain are rusting and neglected on lampposts at either end of the thoroughfare."
The avenue had been renovated in the early 1990's, at which time most of the signs were taken down and put in storage.  The city was wrestling with the question of whether the cost of restoration and reinstalling even made sense.  Nevertheless, according to Kirby, "The Parks Department plans to put a Uruguay medallion on a lamppost near a small park on Dominick Street, where a statue of the Uruguayan hero Jose Artigas was installed last September."
In 2016 there were just 22 medallions hanging along the avenue, whose street signs now included a supplementary "Sixth Avenue" sign.  But while Mayor La Guardia's grand plan seems to have been deteriorating, that was not to be the fate of the statue of General José Artigas. 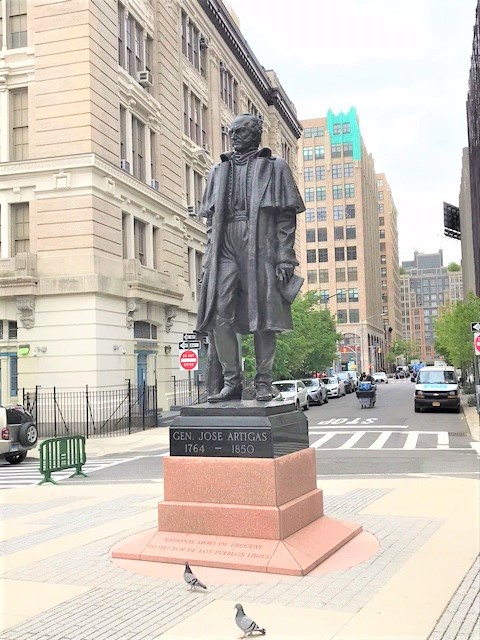 In May the following year ground was broken for a renovation of SoHo Square that would include its being renamed to Spring Street Park.  The statue was removed for restoration and upon its return, was placed in a more prominent spot.
photographs by the author
LaptrinhX.com has no authorization to reuse the content of this blog
Posted by Tom Miller at 1:05 AM