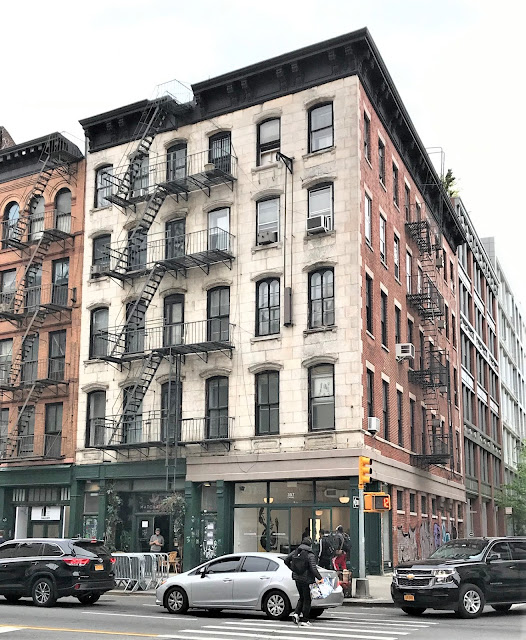 The enterprising and self-promoting William Banta ran his hat store from the three-story converted house at the northwest corner of Canal and Wooster Streets in the first years of the 1850's.  An advertisement in April 1852 read in part, "Ever on the alert, introducing to the public taste articles in the line of his avocation--Banta, the Hatter, No. 106 Canal street, has just received, direct from Europe, several cases of Straw Hat and Caps for infants, boys and Misses."

Next door in the similar house at 108 Canal Street, Asher Rosenblatt ran his fancy goods store.  Before long the two men conspired to replace the vintage structures with modern matching loft and store buildings.

They hired architect W. T. Beers to design the replacement buildings.  Completed in late 1855, the identical Second Empire style buildings were faced in gleaming white marble--appropriate for the upscale shopping thoroughfare--above the cast iron storefronts.  The openings wore molded segmental lintels. Other than the second floor windows, which sat upon decorative panels, the sills perched upon delicate brackets.   The wooden frames created paired arched windows within each opening.
Banta's opening ad was published in the New York Herald on March 18, 1856:

Wm. Banta will Open To-day his Selection of straw goods; whatever taste and perseverance could do, to produce a superior article and a variety of styles, he has accomplished.  His exertions, no doubt, will be rewarded by a liberal patronage, at 106 Canal street, corner of Wooster street.

Banta offered a wide array of merchandise, including, according to his Trow's Directory listing, "the best qualities of gentlemen's silk, beaver, and felt hats, a full assortment of cloth, velvet, silk, and linen caps, and a very large and desirable stock of straw goods, ladies' furs, beaver, bonnets, &c. &c."
His rental advertisement for the upper floors read:

Somewhat confusingly today, in the 19th century the "first floor," or "first loft," was what today we would call the second floor.  The ground floor was referred to as the "store."  His ad was answered by T. R. Hammond & Wilkinson, "flowers," and by James M. Speer, dealer in trunks.  (It is probable that Hammond & Wilkinson's business was in artificial flowers, used in women's millinery, rather than fresh flowers.)
Asher Rosenblatt's rental advertisement was similar.  It read, "To Let--In the White Marble Building, 108 Canal street, the first and second floors, well adapted for business purposes...Inquire of A. Rosenblatt, same building, in the store."
While Asher Rosenblatt operated his fancy goods store at street level, a relative, Samson Rosenblatt moved his embroidery store in to an upper floor.  The other spaces were occupied in 1856 by Catherine Miller's mantilla shop, and Alex Muir's fringe business.
Mantillas were an important part of a fashionable women's wardrobe in the pre-Civil War years and Catherine Miller's business was apparently brisk.  On January 19, 1857 she advertised, "Mantilla makers wanted, immediately--First rate hands can have steady employment by applying at 108 Canal street (369 new number), over Rosenblatt's fancy store, near Wooster street." 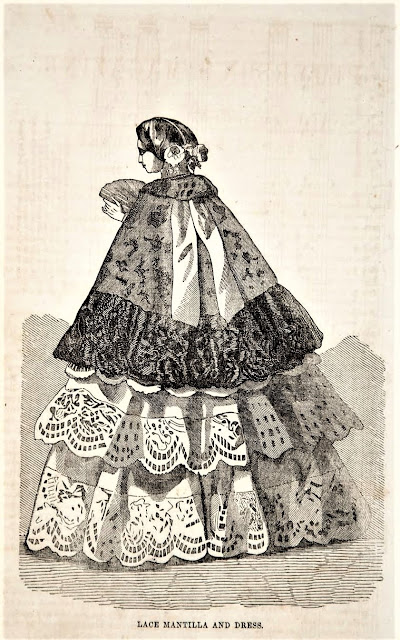 The head portion of this delicate 1856 cape-like mantilla has been folded back, its silk ribbons trailing down the back.
As the ad pointed out, in 1856 Canal Street had been renumbered, giving the buildings their new addresses of 357 and 359 Canal Street.
Catherine Miller left in 1860, replaced by Marcus H. Lichtenstein's ribbon business.  In his opening sale ad on July 16, he cautioned:

Ladies don't lose the last chance at M. H. Lichtenstein's, No. 359 Canal-st., corner of Wooster-st., upstairs.  You will not soon again have such a good chance to get the finest styles and best qualities of Ribbons and Dress Trimmings at such wonderful low prices as surpass belief, less than one-quarter their original cost.

Samson Rosenblatt had also left that year, moving to 338 Broadway.  His space was taken by Myer A. Rosenblatt, presumably a relative, who listed himself merely as "merchant."   Alex Muir had died, but his widow, Margaret, continued the fringe business in his place.  The stalwart woman would take in a partner, Mary Sage, by 1863, and renaming the business Muir & Sage.
Toward the end of 1860 Asher Rosenblatt decided to retire.  He initiated a months-long promotion--what today we would call a going-out-of-business sale--in December.  His ad said he "is now offering until the 1st of February, his entire stock of Embroideries, Lace Goods, &c., at much less than they can be bought elsewhere, inconsequence of retiring from all mercantile pursuits then."
As Asher Rosenblatt had done, it appears that William Banta leased space in his building in 1861 to a relative.  On December 11 that year The New York Times reported, "Anna Taylor, aged 20 years, native of New-York, was tried and convicted of grand larceny, in stealing two fur capes from Jacob Banta, of No. 357 Canal-street."
In the years just after the Civil War William Banta had just two large tenants.  Aaron and Leopold Buxbaum's linen firm, L. Buxbaum & Co., shared the upper floors with Isaac and Moses Buxbaum (no doubt relatives), who dealt in skirts under the firm name M. & I. Buxbaum.
Asher Rosenblatt retained possession of 359 Canal Street, leasing the store space to J. Connor in the late 1860's.  Early on the morning of September 20, 1870, a police officer found four bags of lace goods in the hallway of a building around the corner at 17 Wooster Street.  The New York Times reported, "Sergt. Pickett and other officers made an investigation and found that the premises No. 359 Canal-street, occupied by Mr. J. Connor, importer of lace goods, had been entered from the rear and $1,500 worth of goods stolen."  It was a significant heist, worth more than $30,000 today.
Connor was notified "of the affair" and he rushed to the Prince Street Police Station.  There he identified all the goods as being his.  "No trace of the thieves was discovered," said the article.
After having operated from the location for three decades, William Banta's hat store closed in 1878.  His marble building became the candy store and factory of Haggitiris & Co., run by brothers John G. and Pananos Haggitiris.  The firm remained at least through 1886, after which it became the cigar factory of Esperanza & Co.    That enterprise failed in 1891.
In 1893, 395 Canal Street was sold at auction "to close the estate of Asher Rosenblatt."  By now the fashionable shopping district had moved uptown.  That was reflected in the changing tenant list.  Although Samuel H. Blair remained in the building through 1901 making handkerchiefs and drapery trimmings, the Manhattan Show Case Company and Morgan S. Roper's "showcases and window glass" business were evidence of change.
Next door, a moving company, Kelley's Staten Island and New York Express, operated from what had been William Banta's hat store. 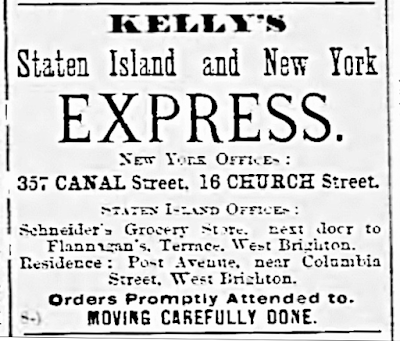 Richmond County Advance, June 6, 1891 (copyright expired)
Canal Street, once New York's most fashionable shopping thoroughfare, had become industrial following World War I.  By 1923 another moving firm, the Yonkers Standard Express Company, operated from 357 and the Lepper Auto Service Company was at 359.  During the Depression years the Brown Chemical Company was upstairs in 359 Canal Street.  On June 19, 1936 the Daily News reported, "Fire feeding on inflammable stock swept the fourth-floor laboratories of the Brown Chemical Company, 359 Canal st., near Wooster St., early yesterday afternoon.  Firemen confined the blaze to the laboratories."
Dorman Machine Tool Works occupied the store next door.  But another change was happening in the neighborhood.  Artists were discovering that the cheap lofts made spacious and affordable studios.  In the 1940's artist Romare Bearden established his art studio here.  Born in 1912 in Charlotte, North Caroline, he grew up in Manhattan and Pittsburgh, Pennsylvania, and graduated from New York University in 1935.  Writing in The New York Times on October 2, 2002, Stephen Kinzer noted, "Although Bearden had a studio at 357 Canal Street in Manhattan when the Abstract Expressionist movement was flowering a few blocks north, he did not join it."
Bearden went on to have shows at the Corcoran Gallery of Art, the Museum of Modern Art, and to receive the National Medal of Arts from President Ronald Reagan.
The third quarter of the century saw this area of Canal Street become what was unofficially known as the plastics district.  In the 1970's Amplest Inc. occupied the ground floor of 359 Canal Street.  The New York Times tipped off those preparing to move on January 5, 1977 that it was a good place to buy Bubble Wrap.
Artists continued to find living-working space (unofficially) in the upper floors.  In 1971 Italian-born artist Vita Giorgi was living in 359 when she participated in the "Ten Downtown" show.  The event had been established in 1968 when ten artists opened up their lofts in or near Soho and exhibited their works for three weekends in April.  Those artists chose another 10 for the next years' exhibition, and so on. 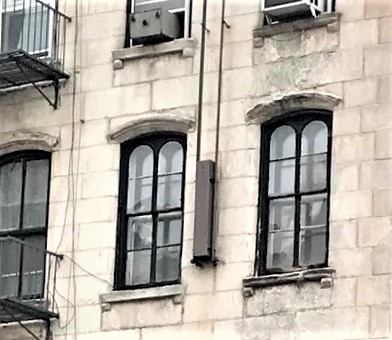 The original arched frames survive on the third floor of 359 Canal Street.
The two buildings are easily overlooked today.  Their marble been seriously eroded by 20th century acid rain and pollution.  Yet with a little imagination, one can imagine when stylishly-dressed ladies shopped here for lace mantillas and fashionable bonnets.
photographs by the author
LaptrinhX.com has no authorization to reuse the content of this blog
Posted by Tom Miller at 1:06 AM