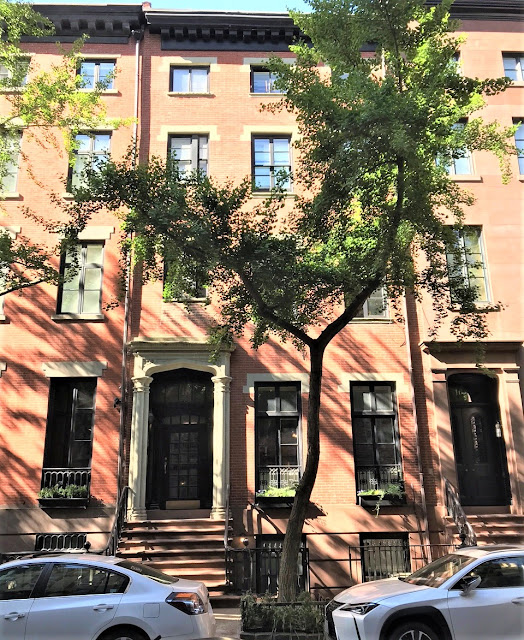 East 10th Street as laid out on the Commissioners' Plan of 1811 ran through the 86-acre estate of Henry Brevoort.  It was not until after his death in 1841 that elegant homes began rising along the block between Fifth Avenue and University Place.  In 1846 retired merchant Abner Weyman began construction on his 25-foot wide home at 86 10th Street (later renumbered 18 East 10th Street).  Weyman was described by a granddaughter later as being "very wealthy."  He was born Abner Edmund Weyman in London in 1786, but had dropped his middle name upon his father's death.
Weyman's four-story, brick-faced house would stand out among the others on the block.  Those were designed in the more expected Greek Revival style, all the rage in the city at the time.  But Weyman's architect chose Gothic Revival.  The entrance was recessed within a superb stone enframement of clustered columns upholding a Gothic arched entablature.  Square headed drip moldings capped the windows and the tall parlor openings most likely were fronted by a cast iron balcony. 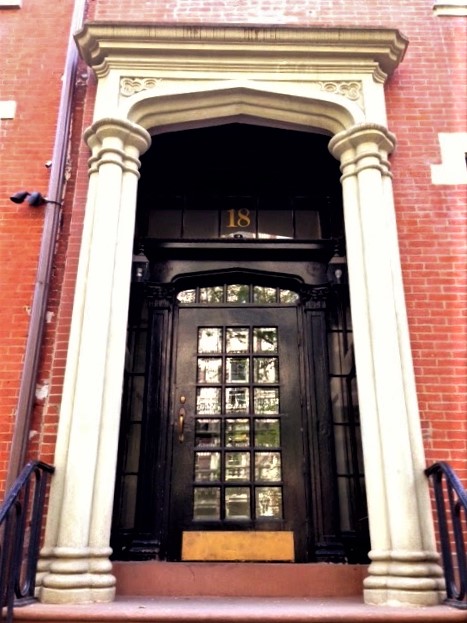 Weyman would not live to see his home completed.  He died at the age of 61 in March 1847.  Instead George L. Walker and his wife, Isabella J., moved in.  George was partner in the legal firm of Horgan, Walker & Smith.   The couple had a son, George, Jr.
An inventory of the household goods hints at the sumptuous interiors.  Included were a rosewood suite of parlor furniture "in light drab silk," oil paintings, "heavy crimson" curtains and velvet carpets.  In the dining room were a carved walnut buffet, "crimson and gold curtains and lambrequins," and a decorated china dinner service.
George Walker, Sr. died in the house on February 12, 1851, just four years after moving in.  His funeral was held in the parlor two days later.
By now George Jr. was married.  He and his wife would have at least three children by 1853.  On January 11, 1853 an advertisement in the New York Herald read, "Wanted--A French woman, who is good seamstress, to take charge of two or three children."  That applicant did not work out for especially long and on March 14, 1855 another ad sought, "A French Protestant young woman, for the care of children and to sew."
The family remained at 18 East 10th Street through 1869.  It was then leased to artist William P. W. Dana.  Born in Boston on February 13, 1833, William Parsons Winchester Dana had studied at the École des Beaux-Arts in Paris. 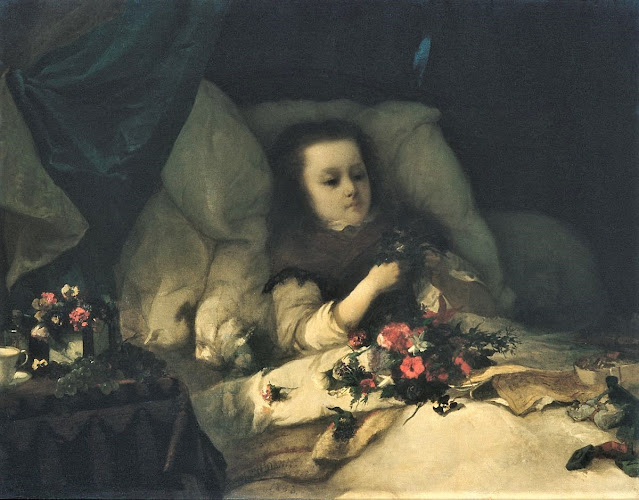 Dana's poignant painting Heart's Ease in in the collection of the Metropolitan Museum of Art.
William P. W. Dana moved permanently to Europe in 1870.  In April 1871 the Walkers held an auction of all the furniture, carpeting and artwork in the East 10th Street house.  They nevertheless retained possession and continued to lease it.
William P. Towne, a dealer in faucets on West 4th Street, lived here in the early 1870's, followed by Thomas Greig, a drygoods merchant.  He and his family moved in in 1876 and remained into the 1880's.
George L. Walker sold the house on May 1, 1888 to Samuel H. Hoppin.  It was resold the following year to Henry Beekman Livingston and his wife, the former Frances Redmond, for $52,500--around $1.5 million today.
The couple's social pedigree could not have been more impressive.  Livingston was born on Washington Square in 1854 to Henry Beekman Livingston, Sr. and Mary Lawrence Livingston (both shared the same surname).  Frances Livingston, Henry Jr.'s second wife, was the daughter of William Redmond and Sabine Elizabeth Hoyt.  The socially prominent couple appeared on Ward McAllister's list of the socially elite.
It is unclear how long the Livingstons lived in the house, but they were leasing it by 1895 to Jacob Ewing Ward and his wife, the former Mary Kitchell.  Described by The Adjuster as a descendant of “one of the oldest and most respected of New Jersey families,” Ward’s family had been in America since Josiah Ward helped settle Newark in 1666.  Following his graduation from Rutgers College in 1875, he practiced law, eventually being appointed assistant counsel for The Prudential.  He was also a partner in the Madison Aqueduct Company, incorporated in 1872.
Living in the house with the Wards was Mary’s mother, Mrs. Ambrose E. Kitchell.  The women partnered in their entertainments, announcing their mutual “at homes” in the society pages.    Their stay on East 10th Street would be relatively brief.  In 1897 the Social Register listed them a block away at 47 West 11th Street.
The Livingstons sold 18 East 10th Street in September 1901 to Ida M. Ryan.  She paid the equivalent of about $1.5 million in today's money.  Ida purchased it as an investment and continued to lease it to well-heeled families.
Her first tenants were lawyer and journalist Arthur Sedgwick and his wife.  The author of several legal treatises, he was long associated with the Nation and was at one time co-editor of The American Law Review with Oliver Wendell Homes.  Not everyone viewed Sedgwick favorably.  Boston publisher Dana Estes called him an “egotistic marplot.”
The parlor was the scene of refined gatherings while the Sedgwicks were in residence.  On December 12, 1902, for instance, The New York Press advised, "Mrs. Arthur G. Sedgwick will give receptions in her home, No. 18 East Tenth street, on January 9, 16, 23, and 30."
In June 1902 Hettie Sherman Evarts Beaman leased the house.   She was the eldest daughter of William Maxwell Evarts, Secretary of State under President Hayes.  Her husband, Charles Cotesworth Beaman, who had died the previous year, had been a partner in the legal firm of Evarts, Choate & Beaman.   His impressive background included his appointment in 1870 as the first Solicitor General of the United States.
With Hettie in the 10th Street house was her unmarried brother-in-law, 53-year old William Stacy Beaman.  He, too, was a lawyer with Evarts, Coate & Beaman at No. 80 Maiden Lane.  A member of the Harvard Club, he was still in the house in 1917 when he reported to his fellow alumni, “[I] Have continued in the practice of law with office address and residence unchanged.  Voted for Woodrow Wilson’s re-election.”
In May that year Hettie Sherman Beaman died at the home of her daughter in Boston at the age of 65.  William Stacy Beaman left the East 10th Street house by November 1920 when L. J. Praeger leased it “for the season.”  Praeger rented the house for at least two more winters.
The house that had seen the comings and goings of wealthy attorneys, bankers and writers became home to the liberally-bent Civic Club by 1927.  On January 29 that year S. Stanwood Menken, head of the National Security League, spoke to a meeting of the Teachers’ Union here.
“Teachers have a right to hold their academic views and express them freely,” he told the assembly, “irrespective of Boards of Education or State authorities of any kind.  No man is good enough to be another man’s thinker.”
When asked what a teacher who believed in evolution should do, considering the ongoing Scopes Trial in Tennessee, Menken said he would “teach what he wanted to or go to jail for it.”
When anarchists Nicola Sacco and Bartolomeo Vanzetti were sentenced to death in 1927, the Civic Club joined other organizations nationwide in dissent.  A protest meeting was held in the house on Friday night, April 15.   Things had not calmed down by October.   When the Fifth Avenue Restaurant discovered that the “literary gathering” of Le Cercle Victor Hugo scheduled for October 18 was in actuality a symposium titled “Sacco and Vanzetti: What Shall We Do?” it canceled the space.  The organization quickly changed the meeting place to the Civic Club, which was happy to oblige.
Although the Civic Club continued to host controversial speakers—like Professor I. Z. Steinberg who lectured on “Trotsky’s Exile and the Future of the Revolution” in 1928—many other topics were on the arts and literature.  But the Club never shied away from protecting basic freedoms. 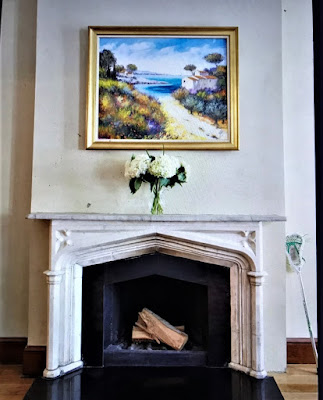 A few of the 1847 interior elements survive, like this exquisite marble Gothic Revival mantel.  photo via Sothebysrealty.com
In 1919 a Queens mother, Mary Ware Dennett, had written a short essay to instruct her two adolescent sons about sex.  When it came to the attention of certain doctors and educators, they asked for copies.  Now a grandmother, Mrs. Dennett published “The Sex Side of Life,” a pamphlet for the instruction of children.
The Y. M. C. A. purchased several hundred copies and it was endorsed and printed by The Medical Review of Reviews.  But on April 29, 1929 Federal Judge Warren B. Burrows fined her $300 and found her guilty “of sending obscene literature through the mails.”
Mary Ware Dennett refused to admit guilt, refused to pay the fine, and was poised to be sent to jail.  “Thousands of intelligent, decent citizens have endorsed my pamphlet during the eleven years it has been distributed,” she told reporters.  “Of the many editorials concerning it that have come to me, not one contains adverse criticism.  Surely the press and these thousands of citizens cannot all be wrong.”
The American Civil Liberties Union held a meeting at the Civic Club the same day that the judge’s opinion came down.  The Mary Ware Dennett Defense Committee was organized, “composed of prominent attorneys, physicians, clergymen and educators,” reported The New York Times.  “The committee, it was announced, will carry the appeal to the Supreme Court of the United States if necessary.” 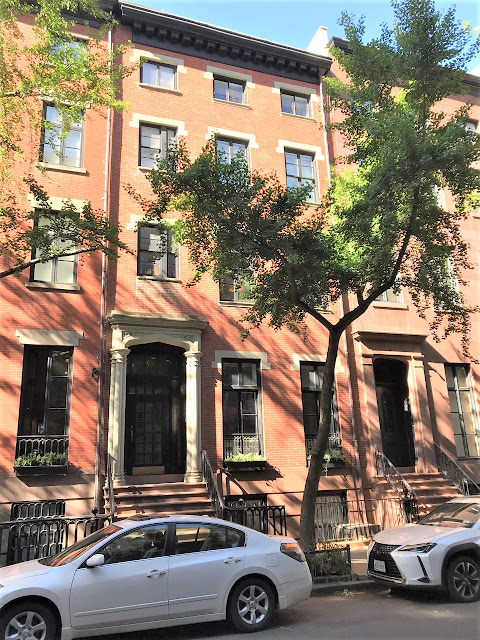 In 1955 a study and lunch room were installed in the basement level, a library and study on the parlor floor, and two apartments on each upper floor.  It was most likely at this time that the Gothic lintels were shaved flat.  Thankfully the magnificent doorway was preserved.
The house was converted to one spacious apartment per floor in 1977; and today there are two sprawling apartments in the house.  The duplex in the basement and parlor floors was recently listed for $8.7 million.
photographs by the author
LaptrinhX.com has no authorization to reuse the content of this blog
Posted by Tom Miller at 1:11 AM