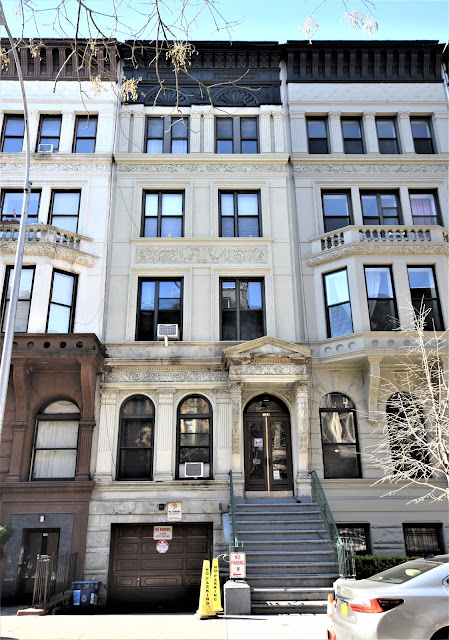 Between 1889 and 1892 architect Gilbert A. Schellenger designed nearly all of the rowhouses along the south side of West 75th Street between Columbus Avenue and Amsterdam Avenue.  Interestingly, he did the work for several different developers, among them George C. Edgar's Sons.
Having just completed a row of five Schelender-designed homes designed, in 1890 George C. Edgar's Sons called him back to design five more--Nos. 124 through 132.  Completed before the end of the year, the 20-foot wide homes were designed in the Renaissance Revival style with touches of Queen Anne, and arranged in an A-B-A-B-A configuration. 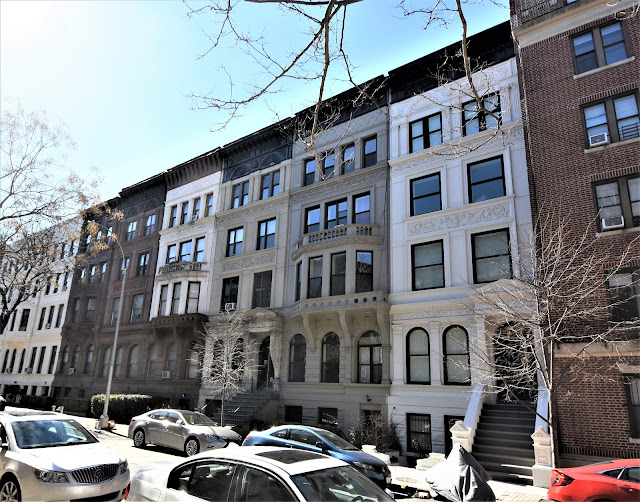 The center house, No. 128, was like its neighbors stood four stories high above an English basement.  Fluted Corinthian pilasters separated the arched parlor windows.  The elaborate carving at the this level included chubby, nude children on the curved portico supports, and foliate Renaissance-style decorations along the frieze.  Nestled among the leafy swirls was an American shield.  The patriotic motif was repeated in the panel above the second floor windows where an American eagle and a pair of waving American flags took center stage. 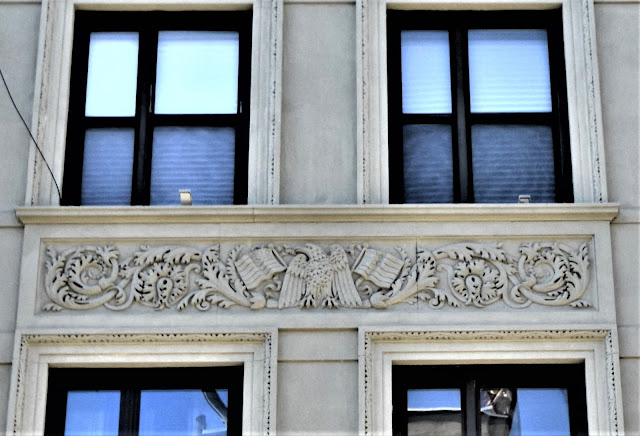 Corinthian pilasters reappeared at the fourth floor.  The molded fans over the paired windows at this level were part of the elaborate three-part cornice.
The house became home to the family of Rev. Henry S. Day.  Born in England, Day had come to America at an early age and for years had been pastor of the Melrose Baptist Church.  By now he was the president of the New York Medical College and the Hospital for Women, and the treasurer of the American Bible Union.  He and his wife Mary had a daughter, Isabel Marie, and a son, Frank T.
Rev. Day's high standing among society had been evidenced on his daughter Isabel Marie's wedding day in 1888.  The ceremony had taken place in the Days' home only a block to the east, at No. 57 East 75th Street.  Among the guests were the John D. Rockefellers.
Isabel's maid of honor was her cousin, Nellie Day Sugden.  Four years later, on November 29, 1892, her wedding took place in the Days' new home.   The ceremony had a decided military flavor.  Nellie's groom, Irving Longking Wiltsie, was a member of Troop A of the New York National Guard and all the uniformed ushers were members of the unit.
Henry Day's health began to fail in 1894.  Finally, "after a lingering illness," according to the New York Herald, he died in the house on April 6, 1895 at the age of 65.
Before too long Mary shared the house either with a single boarder or companion.  Whichever she was, Barbara MacGahan was a fascinating figure.  The widow of the well-known journalist and war correspondent Janarius Aloysius MacGahan, she "came from the old Russian family of Elagine, whose members were landed proprietors in the government of Tula, Russia," according to The Globe and Commercial Adviser.  In 1876 she became the Russian correspondent to the New York Herald, and in 1880 joined the staff of The New York Times.  Over the next decade or so her articles appeared in many newspapers throughout the United States and Russia.  She also translated works by Mark Twain, Edgar Allan Poe and Bret Harte into Russian.
Mary was once again alone in the house following MacGahan's death on February 28, 1904.  She died the following year and two years later, on March 19, 1906, Frank Day sold the house to Ferdinand and Hattie Myers Hess.  The couple paid $25,000, or about $733,000 in today's money. 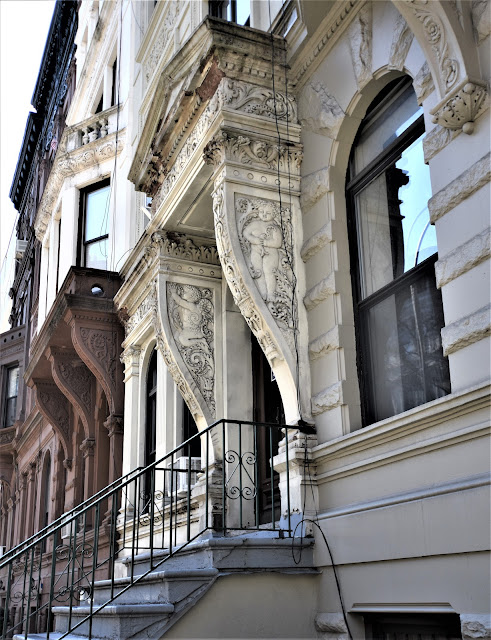 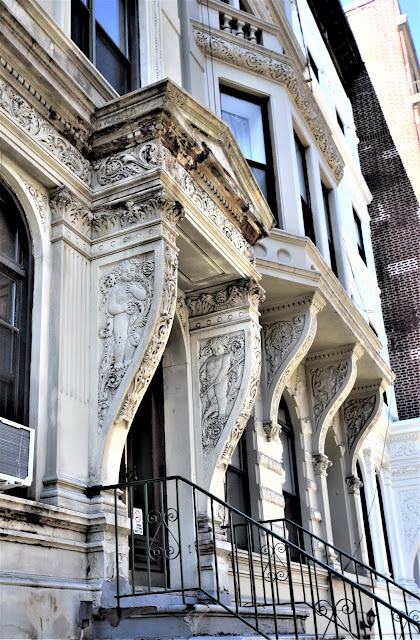 Pudgy naked children decorate the sides of the portico supports.
The Hesses, who had married in 1890, had a daughter, Alma, and son, Monroe F.   Ferdinand Hess was a partner with George W. Drucker in Hess, Goldsmith & Co., leather merchants on Duane Street.  He was also a director in the New Jersey-based real estate firm, the Norwood Park Co. with high-ranking Jewish businessmen like Leopold Stern, August Oppenheimer and Lionel Straus.
Alma and her mother often appeared in society columns together.  On February 2, 1913, for instance, The New York Times noted, "Mrs. Ferdinand Hess and Miss Alma Hess of 128 West Seventy-fifth Street have gone to Saranac for a short visit."
The family's summer home was in Long Branch, New Jersey.  Alma was married to attorney Theodore Richter in the house there on June 15, 1915.
Ferdinand and Hattie lived on in No. 128 West 75th Street until Ferdinand's death at the age of 66 on December 14, 1923.  His funeral was held in the house two days later.  Only a month later, on January 23, 1924, the New York Evening Post reported that his estate had sold the house to the Eastern College of Chiropractic. 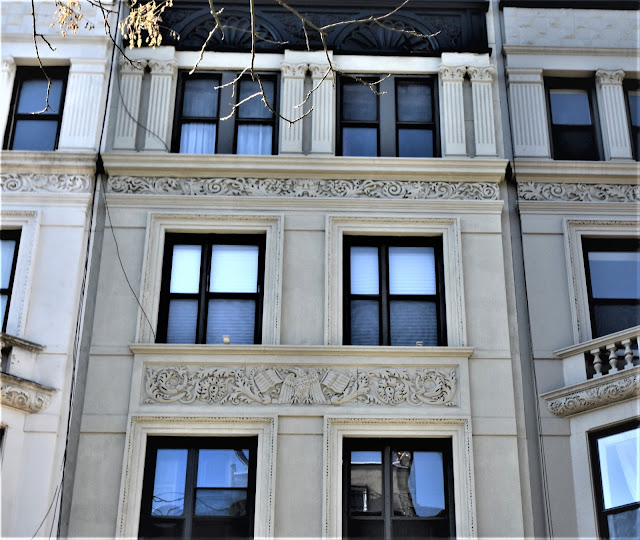 After having been the home of wealthy businessmen and their families for three decades, No. 128 now became a rooming house.  Among the tenants in 1937 was Nicholas Bilos, who made his living as a waiter in a Childs Restaurant at No. 323 Columbus Avenue.
For weeks the neighborhood had been plagued by an armed robber known as The Woman In Black.  At around 2:00 on the morning of February 14, 1937 Norma Parker entered the Childs Restaurant and ordered a cup of coffee.  There were several other customers, and Parker drank her coffee and left.  But she loitered nearby.  The manager, Thomas Hasapas, said later he noticed her pacing the sidewalk across the street.  At 4:55 a.m. the last of the patrons left and Parker reentered, ordering another cup of coffee.
When the manager brought her change, she pulled a pistol from her purse and ordered the manager "Give me the money."  He was passing the $14 from the cash drawer to her when the front door opened.  Parker turned her head and Hasapas lunged and called for Bilos.  As the two men struggled with her, the customer who had walked in joined in the fight.  In the frenzy, her pistol discharged, sounding a benign "pop."  It was a child's cap gun.
Bilos and the customer held her as Hasapas called the police.  The New York Sun reported she pleaded, "Please let me go, you're hurting my wrist."  Bilos answered, "Nuts."
The men had succeeding in ending the criminal career of The Woman in Black.  She explained her motive in the station house saying "housemaids' work bored her."
A celebrated resident by 1941 was Russian-born ballet dancer Xenia Petrovna Makletzova.  She had been trained at the Bolshoi Ballet School, graduating in 1908.  Now retired from the stage, she gave private dancing lessons in her studio on East 34th Street. 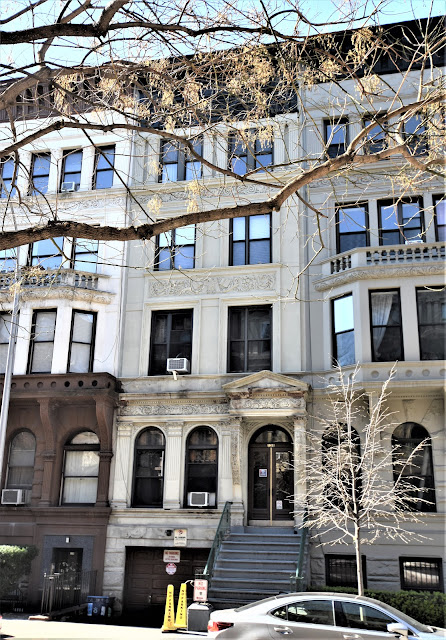 A renovation completed in 1957 resulted in six apartments, including one duplex, along with four furnished rooms on the top floor.  A subsequent and architecturally regrettable project in 1989 carved a garage into the basement.  It was possibly at this time that the stoop railings were replaced with modern versions and the brownstone painted gray.
photographs by the author
LaptrinhX.com has no authorization to reuse the content of this blog
Posted by Tom Miller at 1:40 AM