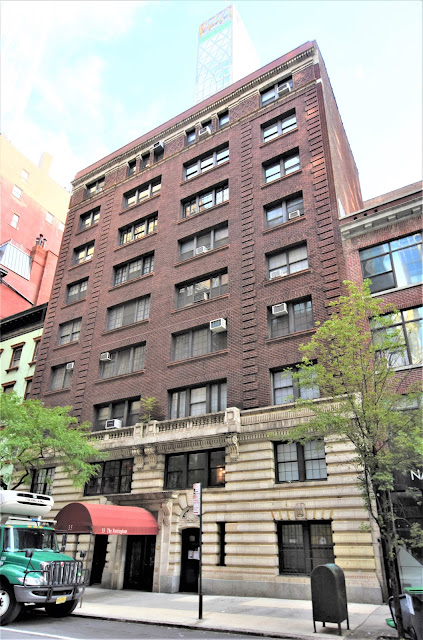 Howard Nott Potter grew up in the magnificent mansion which his uncle, Major General Robert B. Potter, erected at 16 Gramercy Park (home today to The Players).  After studying architecture at Columbia College and in Europe, he went into partnership with Glenville Snelling.  In January 1906 Snelling & Potter filed plans for an upscale apartment house on the triple lot at 33 through 37 East 30th Street for the newly formed development firm of 33 East 30th St. Co.  Howard N. Potter was its president.
The nine-story structure, which cost the equivalent of $6.6 million today to construct, was completed within the year.  Snelling & Potter's tripartite design featured starkly disparate sections.  The two story, deeply rusticated base was faced in white terra cotta.  While service entrances were traditionally underplayed, here the architects gave them dramatic voussoirs that swept over tympanums filled with elaborate terra cotta decorations on a deep blue background. 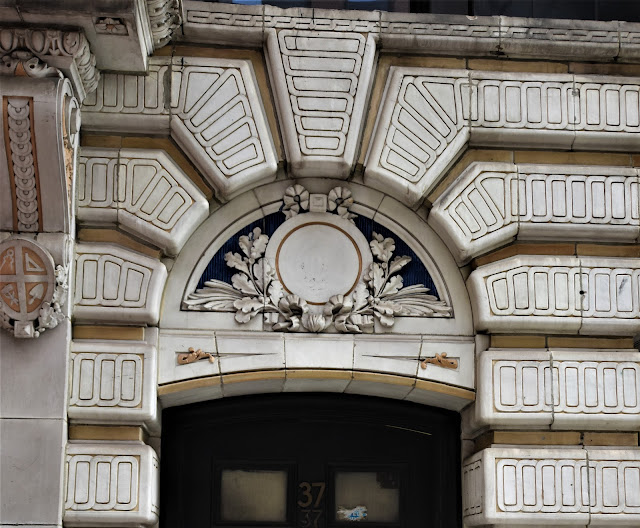 A cornice and faux balcony introduced the much less ornamented midsection of variegated brown brick.  Brick quoins which created three vertical sections provided the only visual interest.  Snelling & Potter gave a nod to the currently popular Arts & Crafts style by diapering the brick piers of the top floor in a lattice pattern.  A deeply overhanging cornice--typical of the Arts & Crafts style--completed the design.

The Record & Guide pointed out an innovation used by the architects--concrete and steel construction--which it called "somewhat a novelty."  The fact that the finished concrete floors were only nine inches thick, "makes it possible, with a judicious distribution of the girders, to obtain a 9-sty building where eight stories would be the limit for the same height with any other construction." 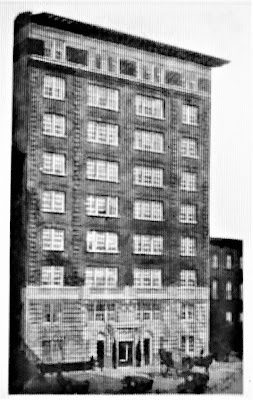 The striking, overhanging cornice has been removed.  Apartment Houses of the Metropolis, 1908 (copyright expired)
There were two apartments per floor, "admirably lighted by very large windows," said the Record & Guide.  It noted that the "grand foyer hall" carried the weight of nine stories, "made possible by the nature of the material." 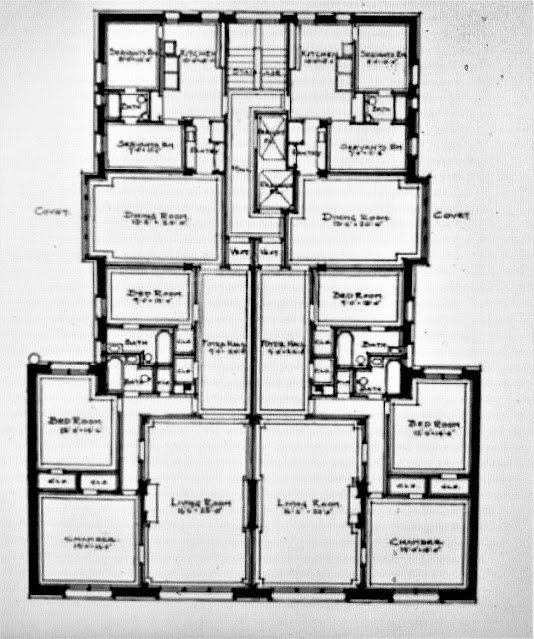 There were two sprawling, mirror image apartments per floor.  Apartment Houses of the Metropolis, 1908 (copyright expired)
An advertisement for the building, called the Nottingham, described "new housekeeping apartments of 9 rooms and 3 baths [which] will be decorated to suit tenants."  (One of those bathrooms, of course, would be relegated for servants.)  Yearly rents ranged from $2,500 to $3,500 depending on the floor (more than $8,500 per month for the most expensive in today's money).  Apartment Houses of the Metropolis said, "The dining rooms are wainscoted to the ceiling in hardwood.  The living rooms have open fireplaces and imported marble mantels, designed from Louis XVI protypes."  The principal rooms had parquet floors and the doors into those rooms were of mahogany.
Among the early residents were broker R. Lawrence Benson and his family.  Like their neighbors, the Bensons maintained a small domestic staff.  On May 28, 1911 one of their servants caused what The New York Press "much excitement."
The newspaper said that on that afternoon "a maid ran screaming from the seventh floor.  Tenants who went upstairs found a man running around the hall almost nude and shouting."  He was, it turned out, Honore Camy, the Bensons' heretofore very proper butler.
The superintendent tried to calm Camy with no success.  Patrolman Donohue arrived on the scene and sent a hurried call to Bellevue Hospital.  Dr. Biram, appeared in the responding ambulance just in time to witness more drama.
The New York Press reported "A maid peeped out of the door of an apartment and the man grasped her.  Dr. Biram...says he found the man apparently trying to choke the terrified girl.  With difficulty the surgeon, the driver, and the policeman rescued the maid, who ran away screaming."
Eventually Camy was subdued, although initially he refused to clothe himself.  He was taken to the psychopathic ward for observation.  R. Lawrence Benson said he had been in his employ for a year "in which time he had not shown eccentricity."
At the time Howard Nott Potter was living in the building which he had erected, as was his unmarried sister, Virginia Potter.  Virginia Potter was, perhaps, more well-known than her architect brother.  She devoted her life to the betterment of women's conditions and was a pioneer in providing housing for working women.  Additionally, in 1885 she helped found the New York League of Girls' Clubs, and she organized the first independent hotel for women in New York and the Manhattan Trade School for Girls.  She was a director of the Association of Working Girls Societies and in 1910 opened the women-only Hotel Virginia. 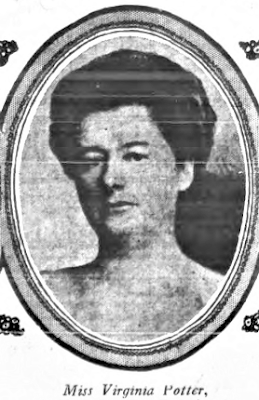 The New York Press, May 3, 1914 (copyright expired)
It may have been Virginia Potter's influence that drew another women's rights proponent to the Nottingham in 1913.  On November 13 The Evening Enterprise reported, "Mrs. Eugene Boissevain, formerly Miss Inez Milholland, announces she has started housekeeping at No. 35 East Thirtieth street."  The remarkable woman was a labor lawyer, a war correspondent and an ardent suffragist.  Earlier that year she had led the dramatic Woman Suffrage Procession on horseback prior to the inauguration of President Woodrow Wilson. 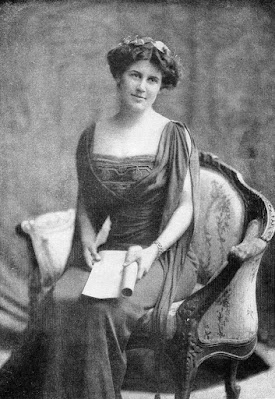 Inez Milholland Boissevain, from the collection of the Library of Congress
In 1914 the National League of Women's Workers opened its headquarters in the Nottingham.  Another resident, Mrs. Hilborne L. Roosevelt, was involved in the League with Virginia Potter.
In October 1916 Inez Milholland Boissevain was in Los Angeles, California on a campaign tour of the National Woman's Party when she collapsed during a speech.   On October 26 The New York Times reported "Mrs. Boissevain is unable to lift her head from her pillow.  She is allowed to see no one, and is under the constant care of a doctor and her sister."  She had been diagnosed with aplastic anemia.  The remarkable woman died on November 26 and her body was returned to New York for her funeral.
While Virginia Potter and Inez Milholland Boissevain were known for their reform work, the names of most of the well-heeled residents of the Nottingham appeared in newspapers simply for society engagements, debutante entertainments and travels.

Above the entrance is a bas relief marble panel depicting a Roman procession.  Unlike the durable terra cotta around it, the marble has been seriously eroded.
Typical was the William Ayrault Hazard family.  The president of the Sterling Salt Mines, the Michigan Salt Works, and head of the William A. Hazard Salt Company, he and his wife, the former Laura Pelton, had two sons and four daughters.  Their summer estate, Meadow Hall, was on Long Island where Hazard was an avid yachtsman and polo player.  He was, according to the New-York Tribune, the "foremost American authority on polo."  On July 12, 1913 the Hazards announced the engagement of their daughter, Jessie Ashley, to Charles Reginald Leonard, from Meadow Hall.
Another socially visible family was that of E. Hicks Herrick.  The apartment was the scene of Margaret Herrick's debutante reception on December 7, 1912.  "After the reception there was a dinner at Sherry's and a theatre party at the Globe Theatre," said The Sun.  Margaret's sister, Louise, took the social spotlight seven years later when she was married in the fashionable St. George's Church to George Alden Cook on November 8, 1919.
On July 19, 1922 William A. Hazard died at Meadow Hall at the age of 68.  Laura Hazard stayed on in their apartment.  Other recognizable names of upper society in the Nottingham included Leland, Cornell, Lacey, Mead and Breese.  Virginia Potter died in 1937 and was buried in Martha's Vineyard where her summer home was. 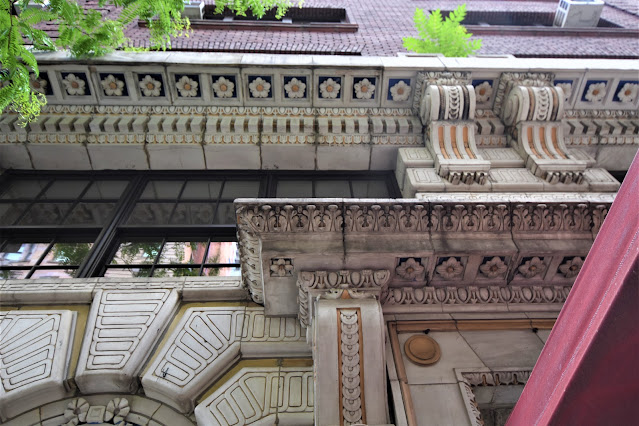 Society columns continued to follow the movements, engagements, and funerals of the Nottingham residents.  A renovation completed in 1941 divided the sprawling apartments.  Where there had been two per floor, there were now five. 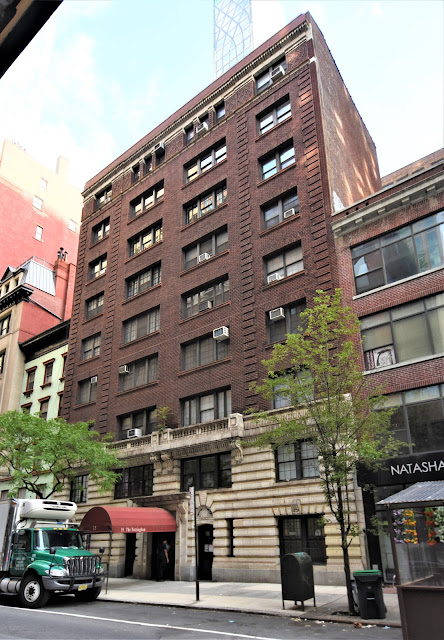 Nevertheless, the exterior of Snelling & Potter's Nottingham apartments, other than the tragically lost cornice, is essentially unchanged.  Its remarkable terra cotta base is as eye-catching today as it was in 1906.
photographs by the author
many thanks to reader Karen L. Green for prompting this post
LaptrinhX.com has no authorization to reuse the content of this blog
Posted by Tom Miller at 1:19 AM