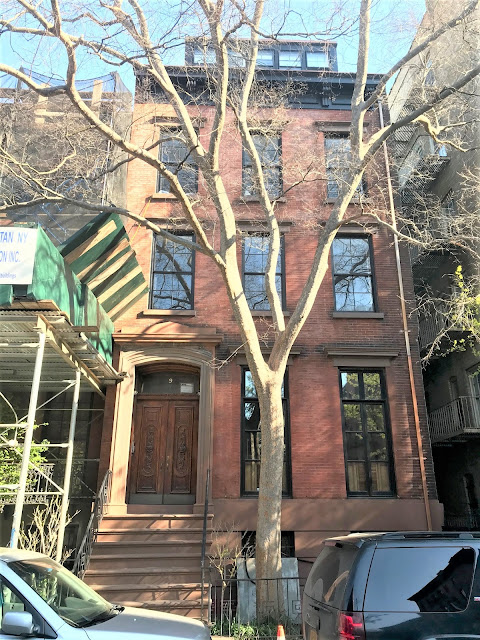 Baron Louis Desire Peugnet and his brother, Hyacinthe, had led impressive lives before arriving in America.   Years later the New York Herald put it succinctly, "M. Peugnet was a somewhat remarkable man, and had passed through stirring scenes in intimate relation with the greatest actors in them."
Louis was born in 1792, "just at the close of the reign of Louis XVI, and in the dawn of the Reign of Terror," as worded by the New York Herald.  In 1813 he entered the Grande Armée and became an intimate of Napoleon and a member of the Emperor's body guard.  Peugnet was wounded in the disastrous Battle of Waterloo. 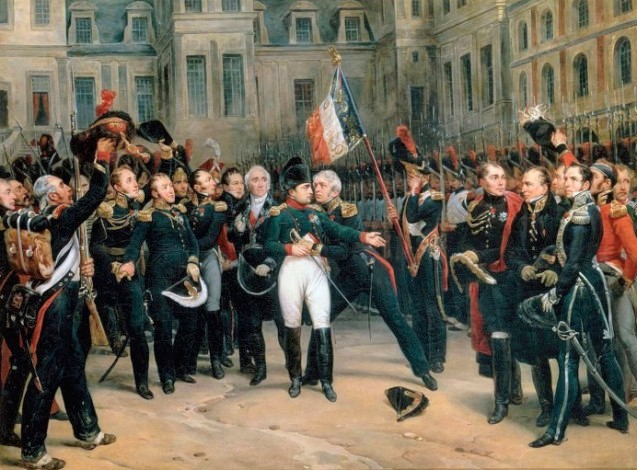 One of the unidentified body guards depicted in Antoine Alphonse's Les Adieux de Fontainebleau is Louis D. Peugnet.  collection of the British Museum
Louis remained in the army following Napoleon's exile and, according to the New York Herald, was "now devoted to the royal cause of Louis XVIII.  In 1821 he was one of the leaders of the military conspiracy, at the head of which was Lafayette, to overthrow the government."  Condemned to death, he and his brother escaped to America in 1821.   He never again used his noble title.
The Marquis de Lafayette sent letters of introduction "to many of the best families in this city and other parts of the country," which enabled Louis Peugnet to "make many useful and pleasant friends," according to the New York Herald.  In February 1830 he married Theresa Pratte, the daughter of General Bernard Pratte.
On April 5, 1836 the brothers acquired land in Greenwich Village along Bank Street.  In his 1893 book Creoles of St. Louis, historian Paul Beckwith noted, "Mr. Peugnet...in company with his brother established a Civil and Military Academy in New York City."  The Freres Peugnet School was located on their Bank Street land and became "the most fashionable school in that city," according to one source.  Louis Peugnet personally instructed young men in swordsmanship, including graduates like Confederate General P. G. T. Beauregard, who would start the Civil War by attacking Fort Sumter.
In 1845 Louis Peugnet erected a fine home for his family at 11 Bank Street.  Twelve years in 1857 later he built an Italianate home next door at 9 Bank.  An investment property, he intended the 23-foot wide residence for well-heeled tenants.   Three stories of red brick sat upon a brownstone English basement.  Hefty Italianate stoop railings and newels led to the double-doored entrance and the parlor windows, which extended to the floor, were most likely fronted by an ornate cast iron balcony. 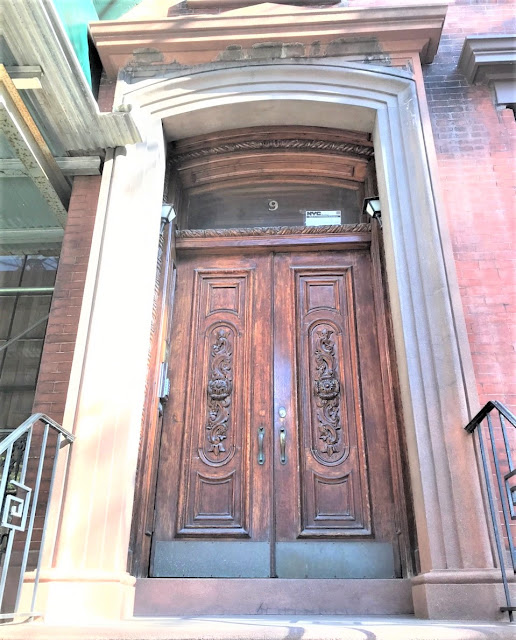 Peugnet's first tenants did remain long.  Their "elegant household furniture" was sold at auction on April 28, 1858.  The listing included a rosewood piano, evidence of the family's affluence.
Two weeks before the auction, Peugnet listed the house for rent, noting it was "built with great care, with the modern improvements."  The ad said that "cards of admission" could be obtained from No. 11 Bank Street and placed the rent at $950, or about $2,500 per month today.
For some reason, by 1864 the Peugnet family had moved from 11 Bank Street into 9 Bank Street.  They were listed here until 1870 when, according to the New York Herald, Louis Peugnet "went abroad for a long stay with his family."  That they intended to return to the Bank Street house was evidenced in the fact that they left all their furnishings.
A rental advertisement in August 1870 offered the furnished house "with all modern improvements, fine yard, large basement, fine parlors, mirrors &c. $175 per month."  The monthly rent would equal about $3,540 today--a bargain by a 21st century point of view.
As it turned out, the Peugnet family never returned to Bank Street.  On September 21, 1877 the New York Herald reported "News has just been received by mail of the death on the 31st, at Trois Torrent [Switzerland] of M. Louis Peugnet, a French gentleman, long a resident of New York."  The article said the family "were residing for the summer at the quiet little watering place where the old gentleman, who had hardly ever had a sick day, breathed his last peaceably in sleep, dying from old age."
The Bank Street house initially saw a relatively rapid turnover in occupants.  In the mid 1870's it was home to Richard J. Tothill, a printer, and his family.  In 1879 Amos K. Hadley, a lawyer with offices at 71 Broadway moved in, and in 1886 it became the home of Peter Denyke.
A Civil War veteran, Denyke and his family would remain at least through the 1890's.  His son, John, was dragged into a scandalous divorce suit in the summer of 1891.
Florence M. and Merrit J. Mott had been married on April 3, 1889.  According to her, he "instituted...a system of cruel and humiliating treatment."  He accused her of infidelity, hired spies to watch her, and continuously asked the neighbors about her movements.  On April 20, 1891 he "removed her and her wearing apparel...to her aunt's residence in Jersey City" where she had previously lived.  He told the aunt, "Here is where I took her from and here is where I leave her."
Florence obtained a divorce with alimony, but on July 20, 1891 Mott took her to court, seeking to have the alimony revoked.  He denied her story and accused of "of unfaithful conduct with one John Denyke, at 9 Bank street," and two men." 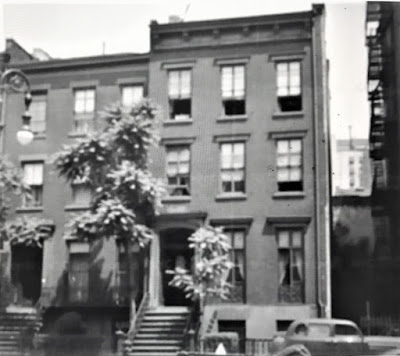 The Italianate stoop railings and newels were still in place in 1941.  Elegant tie-back draperies hang in the parlor windows.  via the NYC Dept. of Records & Information Services.
At some time after the turn of the century the house became home to Frank Wardell Felch and his wife the former Clara Van Leeuwens.  Frank was born in 1854 in New Jersey to George Washington Felch and the former Adelia Francis Roll.  He and Clara were married in 1880.  Interestingly, she had been born just two doors away from 9 Bank Street in October 1867.
Frank died in 1918 and Clara died just two years later, on November 23, 1920, at the age of 62.  In reporting her death, the New-York Tribune noted that the Van Leeuwens were "one of New York's oldest families."
The Felches were following by silversmith John McNally, who died in the house on November 9, 1928. 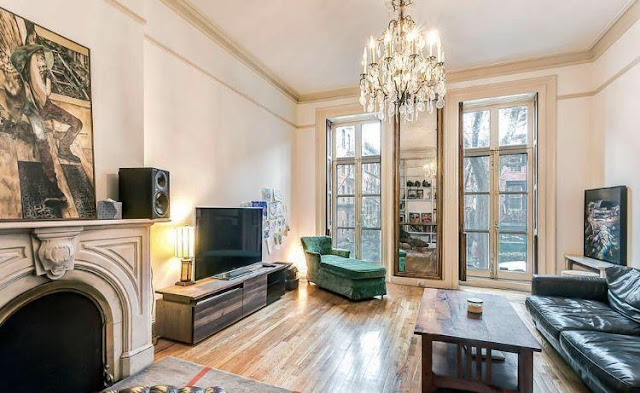 The marble Italianate mantel survives in the parlor.  photo via hotpads.com
The end of the line as a private house came in 1957 when an upper story addition was added.  The basement and parlor floors were converted to a duplex apartment, and the upper floors now held one apartment each.  The modernization of the interiors has happily left a few of the 1857 details intact.
photographs by the author
LaptrinhX.com has no authorization to reuse the content of this blog
Posted by Tom Miller at 1:15 AM