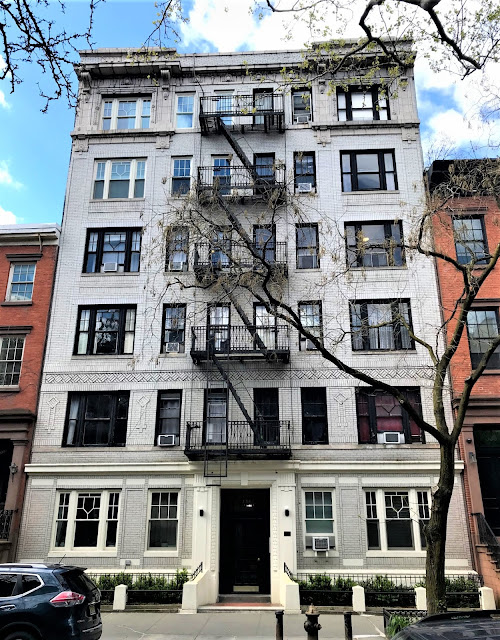 On July 10, 1915 the Record & Guide reported that brothers Joseph and Samuel Harbater had purchased the "two old three-story dwellings" at Nos. 334 and 336 West 22nd Street, between Eighth and Ninth Avenues.  They were two of a row of six handsome Greek Revival homes built by Bezaleel F. Smith in 1841.  The Harbaters announced their intention to replace the vintage structures with an apartment building, prompting the Record & Guide to comment, "This will be the first apartment house in the block."
The architectural firm of Gronenberg & Leuchtag was hired to design a six-story building on the site at a cost of $50,000 (about $1.3 million by today's standards).  The architects' Arts and Crafts design was the latest in architectural taste.  Most of the decoration was executed in brick, like the pendant designs between the second floor openings and the basket weave frieze directly above.  The large windows at the sides of each floor were enhanced with geometric Arts and Crafts style mullions.  Surprisingly, Gronenberg & Leuchtag departed from both brick and Arts and Crafts on the top floor.  Suddenly terra cotta decoration, more in keeping with the Beaux Arts style, took center stage.
Called the Chelsea Arms, the building filled with middle-class tenants, like the unmarried Laura Gould Hopkins.  With the country preoccupied with war in 1918, she found a peaceful diversion in the Cat Fanciers Association.  On December 15 The Sun reported that she was in charge of registrations for the  group's upcoming Cat Exhibit.
At the time another resident, Frank L. Dowling, was suffering from overwork, according to The New York Times.  Like Laura Hopkins, he and his wife, Catherine, were original residents.
Born in Chelsea to poor parents, Dowling had been forced to drop out of school at the age of 14 to work.  He had come a long way from those humble beginnings and was now the Manhattan Borough President.
Despite advise that he should cut back, he continued his hard work.  But after being ill for about a year, in mid-September 1919 he was "seized with an attack of gall stones," according to the The New York Times.  On September 28, an article said "He recovered somewhat on Tuesday last and against the advice of his family and physicians insisted upon transacting business with his office over the telephone."
Pneumonia set in and gradually worsened.  On September 27 the family was called to his bedside and shortly afterward Dowling went into a coma before dying.  He was 54 years old.
The Times Union reported on September 28, "All day and until a late hour last night the home of Mr. Dowling at 334 West Twenty-second street, Manhattan, was the Mecca of sorrowing men, women and children, who had known him even before he became the city father, nearly fifteen years ago."
The article said, "When the funeral is held on Tuesday, it is expected that there will be a jam at [St. Columba's Church]," adding, "It is expected that the funeral will be one of large proportions as Mr. Dowling has long been in the city service and was a men of considerable popularity outside of his political relations."  Indeed, in attendance were Mayor John Hyland, Governor Alfred E. Smith and high-ranking members of Tammany Hall.
In the early 1920's Morris Neville was the manager of the large Lyric Picture Theater at the southwest corner of 23rd Street and Seventh Avenue.  On the afternoon of February 4, 1922 a large audience was enjoying a silent film.  Among Neville's matinee staff were the pianist Grace Holly, doorkeeper Frank Smith and projectionist Charles Eisner.
Motion picture film was made of celluloid, a highly flammable material.  There was constant danger of the film coming in contact with the projector's hot light bulb or igniting by some other means.  Half-way through the movie, according to the New-York Tribune, the reel exploded and a fire ensued.
"Panic, resulting from the explosion of a reel of film being projected in the Lyric Picture Theater...drove 500 men, women and children in a wild rush for exits," said the article.  Neville's staff kept their heads, no doubt preventing many injuries.
"Miss Grace Holly, pianist, when the rush started, shouted assurances that there was no danger and finding this to be of no avail, played lively march music until the house was empty.  She was the last to leave," said the article.  It credited Frank Smith with preventing "loss of life and serious injuries," saying he "threw open all doors when the screaming crowd began its rush."  In the meantime, Charles Eisner had been seriously burned in the explosion and in trying to escape his burning projection booth.  He was taken to Bellevue Hospital.
The New-York Tribune reported, "After the house had been cleared, it was found to be littered with women's fur coats, millinery, gloves and umbrellas.  More than a score of men's hats, also were picked up by the police of the West Thirtieth Street station."
An advertisement in The New York Times in 1926 read: "Chelsea Arms--large light, airy, attractively furnished living room, bedroom, kitchen, bath, with everything required for housekeeping; adults."
The tenants continued to be respectable and middle-class, like  Joseph A. Capell and Ernest Harvier, for instance.  Both lived here in the 1920's.  In 1928 the 37-year-old Capell worked as a yard conductor with the New York Central Railroad Company.
Harvier was a former newspaper man, an "authority on local political history," according to The New York Times, and a long-term adversary of Tammany Hall.  Born in 1863, he was for many years a political editorial writer on the staff of the New York Sun.  His articles on old New York frequently appeared in other publications, like The New York Times.  He died of a heart attack in his apartment on May 9, 1929.
The configuration of the apartments remained unchanged throughout the decades.  On June 30, 1966 an advertisement in The Villager offered "3 large rooms, modern, complete kitchen, $95 month."  That would translate to about $750 today. 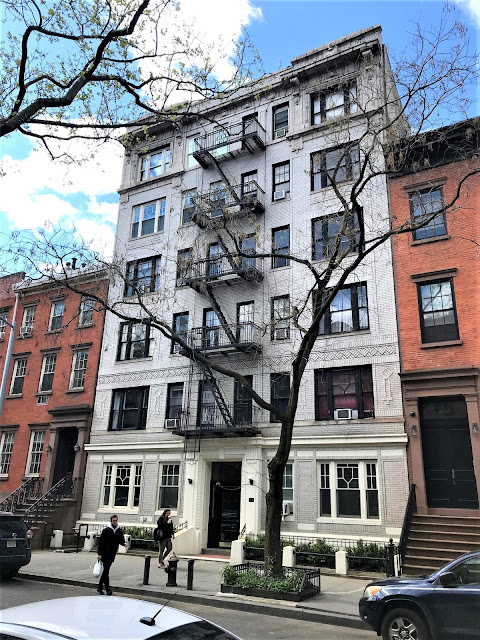 Except for the regrettable loss of some of the 1915 window mullions, Greenberg & Leuchtag's prim Arts and Crafts structure remains amazingly intact.
photographs by the author
no permission to reuse the content of this blog has been granted to LaptrinhX.com
Posted by Tom Miller at 1:17 AM