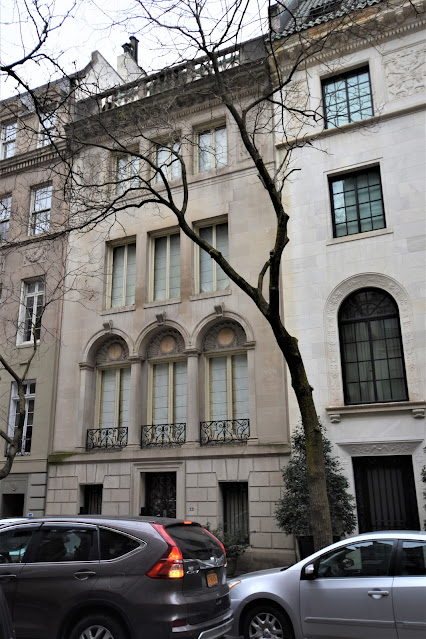 In January 1881 William Erastus Tefft purchased the newly-built rowhouse at No. 22 East 64th Street from developer John Davidson.  Designed by architect James E. Ware, the high-stooped brownstone was 25-feet wide and three stories tall above an English basement.  Tefft paid $83,000 for the residence, or around $2.1 million today.
Tefft was born in Syracuse, New York on January 15, 1841.  He was a partner in the dry goods firm Tefft, Weller & Co., co-founded by his father.   He and his wife, the former Emma A. Apgar, had eight children, William Jr., Charles Griswold, Frank, Gladys, Edna, Ella Gretchen (who went by her middle name), Jessie Augusta and Alma.  The family's summer estate, Hamilton Grange, was in Great Barrington, Massachusetts.  It was described by The New York Times as "one of the finest residences in the town."
Emma's entertainments straddled the roles of socialite and well-to-do mother.  On March 27, 1885, for instance, The Evening Telegram announced, "A very pretty birthday party will be given this evening at the residence of Mrs. W. E. Tefft, No. 22 East Sixty-fourth street, in honor of the birthday of her young daughter.  Eighty invitations have been issued, and there will be dancing, with music by Bernstein and supper by Sherry.  The supper table will be very handsomely decorated, and there will be in the centre a great Easter egg, en surprise, in which will be disclosed unique favors for the children."
And a month later, on April 23, the newspaper reported on a grown-up affair.  "Mrs. W. E. Tefft will give an informal card party at her residence...this evening.  There will be six round tables, handsomely decorated with flowers.  Sherry will serve the supper."

In 1888 William succeeded his father as the senior member of the Tefft, Weller & Co.  His memberships reflected his broad range of interests:  The Merchants' Club, the Players', the Liederkranz, the Riding and Driving Club, the American Museum of Natural History and the Metropolitan Museum of Art, among them.
The 64th Street house held his rather unusual collection.  Fabrics, Fancy Goods and Notions explained, "His collection of theatrical curiosities is said to be surpassed only by that owned by the Players' Club."  The journal said that among his intimate friends were actors Edwin Booth, Laura Keene, and Lawrence Barrett, noting that "his collection is filled with many reminiscences of them and their connection with the stage."
A joyous entertainment was held in the house for the Tefft's 25th wedding anniversary on January 14, 1887.  The New York Times said the house "blazed with light" and added, "The rooms were very tastefully decorated with flowers and palms, and after the reception a supper was served by Sherry."
The residence was the scene Jessie's wedding to Henry Bloodgood Slayback on October 31, 1894.  Her sister Edna served as her maid of honor and Gretchen as one of the bridesmaids.  The Sun noted "A large reception followed the ceremony."
Edna's wedding ceremony was performed in St. Thomas's Church on November 17, 1897.  She married William Abbott Slayback, the brother of Jessie's husband.  The Sun reported, "After the church ceremony there was a large reception given by the bride's parents at their residence."
Around this time William Tefft was diagnosed with Bright's disease, a kidney condition known today as acute nephritis.  It prompted a series of visits to doctors across the country and in Europe for consultation.
There were two weddings within the family in 1901.  Gretchen was married to John Leveritt Pell in the house on April 23.  Later the New York Herald reported that the Teffts had gone to Hamilton Grange and "will have as their guests part of the season Mr. and Mrs. John Pell."
Charles Tefft's wedding two months later was less fashionable.  Initially, little was known of his bride, but The Argus discovered details.  On June 24, it began an article describing the ceremony which took place in city court the previous week as "the romantic marriage of Charles G. Tefft and Miss Grace A. Gates."  It disclosed that the mysterious bride was "well known at No. 54 East Forty-ninth street, which is a home for trained nurses."  Grace had tended to Charles during a serious illness.
Ten days before the article she had packed her things and left the nurses' home, saying "Good-bye.  Hereafter I'll take care of myself and one other only."  The article said "Then she left without any further explanation."
That year William's worsening medical condition forced him to retire.  He sold No. 22 East 64th Street to William Baylis and moved into Hamilton Grange permanently.  The New York Times commented that the many doctors he had seen "were unable to help him materially."  He died on February 19, 1903.
The 64th house saw a rapid turnover of owners.  Baylis sold it to Solomon A. Cohn in 1902 who sold it the same year to Louis Korn.  Korn sold it in March 1903 to H. P. Goldschmidt, who remained for 13 years, selling it to Charles L. Bernheimer in 1917.  He transferred title to Franklin Pettit the following year and Pettit sold it in November 1919 to Florence Augusta Alker.
Florence had no intentions of reselling.  She hired architect Harry Allen Jacobs to completely remodel the outdated brownstone at a cost of about $450,000 in today's money.  He stripped off the façade, pulled it forward to the property line, and created a limestone-clad, neo-Italianate Renaissance showplace.  The second floor, or piano nobile, grabbed the attention.  Here three round-arched openings fronted by swirling iron grills created a loggia.  Their tympanums held marble roundels flanked by masks in profile and backed by deeply carved shells. 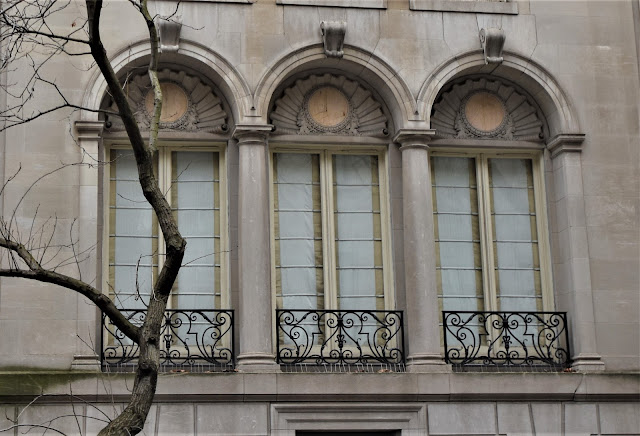 Florence Alker was the widow of Alphonse H. Alker.  Her father was James E. Ward, the founder of the Ward Line of steamships.  The Alker summer estate, Idlewilde, was in Great Neck, Long Island. 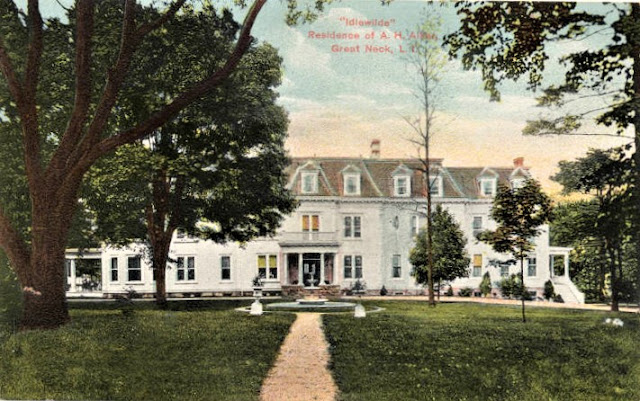 A postcard depicted Florence's country estate, Idlewilde.
Sadly, Florence would not enjoy her remodeled home for long.  Only a year after its completion, on May 13, 1921, she died.  Her estate was appraised at $25.5 million by today's standards.
Florence's heirs sold the house to Sarah Emile Woodbury.  The daughter of Effington Townsend, she was twice widowed.  Her first husband, Samuel Irvin, died in 1884.  Her second was John McGaw Woodbury, who died in 1914.
Sarah brought Harry Allen Jacobs back in 1923 to add a small penthouse, hidden behind the balustrade above the cornice.  The renovations were completed in the summer of 1923 and on August 24 The Sun reported "Mrs. John McG. Woodbury will return from Southampton October 1 and, with her son, E. Townsend Irvin, will occupy her new house at 22 East Sixty-fourth street.
A broker with J. P. Morgan & Co., Effington Townsend Irvin was best known for his yachting.  He was a vice-commodore of the New York Yacht Club and was a member of the America's Cup Committee which handled the arrangements for the annual American-British races.
Sarah Woodbury died in the house on May 19, 1938 at the age of 89.  E. Townsend Irvin and his wife, the former May Novy, continued to live in the residence.  Irvin died at the age of 82 on November 19, 1957.
May later sold the house to Dr. Jacob Easton Holzman and his wife, Minnette.   Dr. Holzman was a specialist in diagnosis and internal medicine.  He died in the home on March 23, 1970. 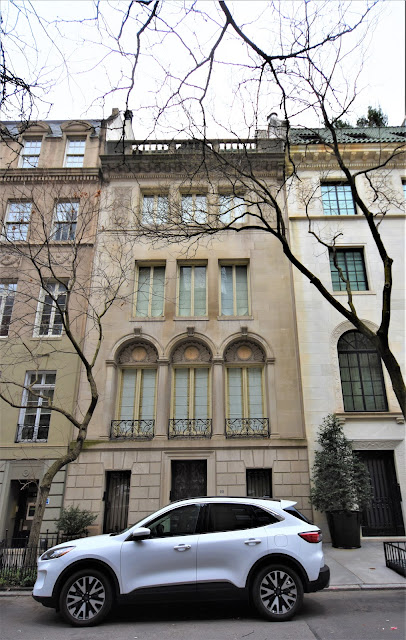 No. 22 East 64th Street remains a private residence.  It was placed on the market in 2014 for $42 million, the listing boasting "exquisite gilded detailing, parquet de Versailles wood floors, oak paneling," a marble staircase, stained glass skylight and 10 marble fireplaces.
photographs by the author
Posted by Tom Miller at 1:19 AM