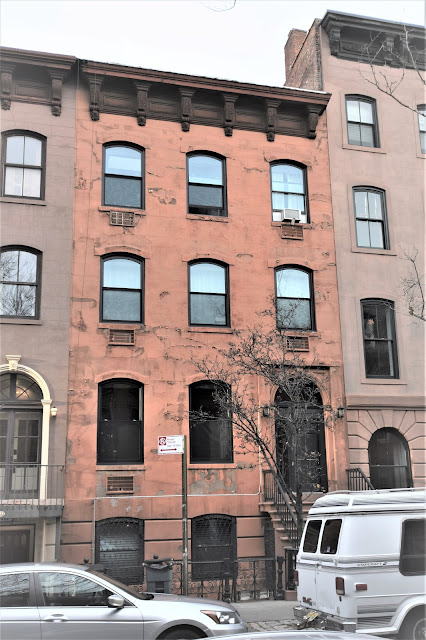 The entrance enframement and window details were removed during a 20th century modernization.

In 1855 William S. Fogg and Mary A. French began construction on side-by-side houses on West 22nd Street, between Ninth and Tenth Avenues.   The identical houses were doubtlessly designed by the same architects.  Each was three stories tall over a high rusticated basement.  Designed in the Italianate style, they exhibited expected elements, like elliptical arched windows with graceful molded lintels and arched double-doored entrances with foliated brackets that upheld classical pediments.

The Fogg family moved into the eastern house, No. 299 (renumbered 431 in 1868).  William was a partner with his brother Charles in the upholstery firm of W. S. Fogg & Brother.  He was, as well, a founder of the Union Dime Savings Bank and a director of the Ninth National Bank.  He and his wife, the former Mary Wood, had a son, William Wood Fogg, who was four-years-old when the family moved into the new home.
Mary was the daughter of sea captain Denison B. Wood and Lydia McKildo and had grown up in a fine home at No. 310 Spring Street.  Her brother, Denison, Jr. was still living there with their mother in 1865 when he died suddenly at the age of 54.  The ground floor of the house had been converted to a store by then, and so on November 5 Wood's funeral was held the in West 22nd Street house.
In the meantime, William did his part for the North during the Civil War, albeit not in uniform.  The New York Times later said, "During the war he did three-fourths of the work of the Government in his line of business."  And when the horrifying Draft Riots broke out in 1863, "he took an active part in [suppressing] the riots and rode his saddle horse as a patrolling policeman."
The younger William graduated from Columbia University in 1872.  When he entered the family business the name was changed to W. S. Fogg & Son.
Mary's widowed mother was still living in the Spring Street house when she died at the age of 88 on June 29, 1873.  As had been the case with Denison, her funeral was held in the Fogg residence.
William S. Fogg's upholstery business purchased various materials for stuffing, including horsehair batting, goose or duck feathers, and "wood wool," known today as excelsior.  Fogg was dissatisfied with a shipment of feathers in 1873, which he termed "loaded," and refused to pay Thompson & Co.  A law suit followed which afforded the New York Herald to poke fun at William's surname.  It entitled an article on December 25, "Getting Befogged Over a Foggy Subject."
The well-to-do families on the West 22nd Street block all had a small domestic staff.  Unlike the wealthier families a few blocks to the east, their servants often did multiple tasks.  Mary was looking to fill one such position in 1875 when she placed an ad that read:

Wanted--A Good Girl to cook, wash and iron for a small family; must be a good baker, a neat and obliging girl.

A rash of suspicious fires plagued the neighborhood around the W. S. Fogg & Son factory on Chatham Street in the first months of 1879.  Just after noon on April 3, while the workers had gone to lunch, another broke out in the Fogg building.  The Evening Telegram noted, "Mr. Fogg, Sr. was in the office down stairs at the time.  The moment he learned the fire had broken out he told [a] policeman."  Fogg urged him to notify the Fire Department.  But instead the officer rushed upstairs and tried to extinguish the fire himself.  In doing so 15 minutes was lost.
The New York Times reported "Owing to the combustible nature of the contents of the building, consisting chiefly of feathers, curled hair, and 'excelsior,' the flames spread with great rapidity, and when the firemen arrived had extended to the entire upper portion of the building."  Fogg suffered losses equal to about $132,000 today.
In October 1884 William S. Fogg became ill.  He never recovered and died two months later on December 22.  The funeral was held in the parlor at 3:00 on Christmas Eve.
Fogg's death may have been hastened by worries over business problems.   Earlier that year, in February, William S. Fogg & Son had failed.  Despite the "embarrassment," as newspapers called bankruptcies, the family's substantial wealth sustained their lifestyle.
William Wood Fogg took a new career path as a real estate auctioneer, appraiser and broker.  He was successful enough that he was called as an expert witness in a real estate litigation in early in 1891.   The Foggs were still living in the 22nd Street house at the time, but that would soon change.  On March 10 it was sold to Rosamond Herter who immediately hired Herter Brothers to make interior alterations costing about $101,000 in today's money.  Her choice of firms is not surprising, given that her husband was architect Franz W. Herter.
The purchase was for investment reasons and Rosamond leased the remodeled house.  It was home to Charles M. Brown and his wife, the former Amanda Bates, in the late 1890's.  The couple maintained a country home in Poughkeepsie where Amanda died on August 3, 1901.  Her funeral was held in the 22nd Street house two days later.
The residence became a boarding house within the year.  On August 27, 1902 an advertisement offered "Handsomely furnished large and small rooms; bath on every floor, desirable location; absolutely clean; Southern exposure."
Among the residents in 1908 was Bayard Taylor.  The 19-year-old's father, Henry A. Taylor had died several years earlier leaving him a trust of $600 per year--about $16,800 today.  His brother, Henry A. Taylor, Jr., a banker on William Street, administered the trust.
Bayard had been studying in Virginia until the fall of 1908.  He came to New York to find employment, but, according to The Sun, "The boy had not got on well in the city."  On December 21 he was found unconscious on the flagstones under his third story window.  Suicide was against the law and the boy was taken to New York Hospital where he was charged "with attempting to kill himself by jumping from the third story window," said The Sun.  Authorities had a theory about the case.  "The police put him down as suffering from too many cigarettes." 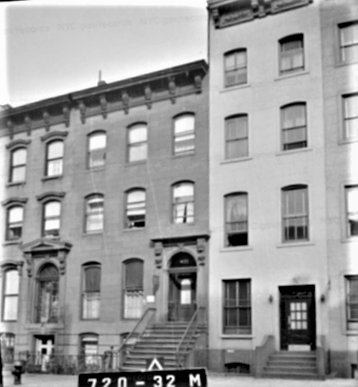 In 1941 the entrance pediment was gone and the window details shaved off.  Their original appearance can be seen in the Mary A. French house to the left.  via the NYC Dept of Records & Information Services
The boarders in No. 431 West 22nd Street were professional and respectable.  Two of them, Frank G. Patchin and his wife, threw themselves into the care of wounded soldiers during World War I.  On March 11, 1919 the Rochester Democrat and Chronicle reported that they had "been actively engaged in work of the War Camp Community Service."  Mrs. Patchin solicited requests from parents whose sons had been sent to New York hospitals so she could visit them.  She told a reporter that spending time with the soldiers helped their mental outlook.  "Many boys who are discouraged because of loss of some part of the body or who have been gassed, are sent from our [wards] encouraged and take on a new lease of life."
At mid-century No. 431 was still being operated as a rooming house.  It retained its Victorian double doors, but had lost the triangular pediment over the entrance and the molded lintels had been shaved off. 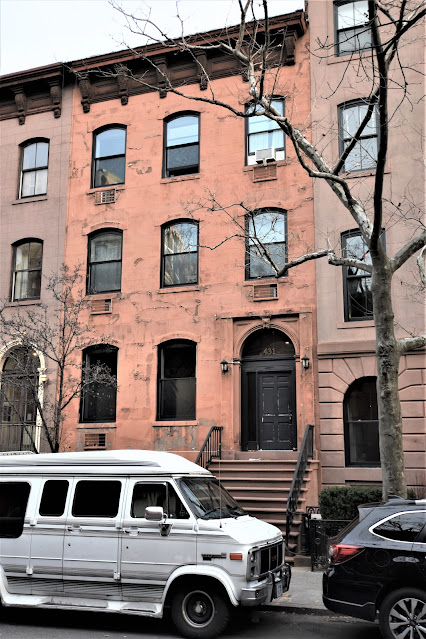 A renovation completed in 1968 resulted in seven apartments, including a duplex.  Modern replacement windows have replaced the originals that survived as late as 1981.
photographs by the author
Posted by Tom Miller at 1:16 AM