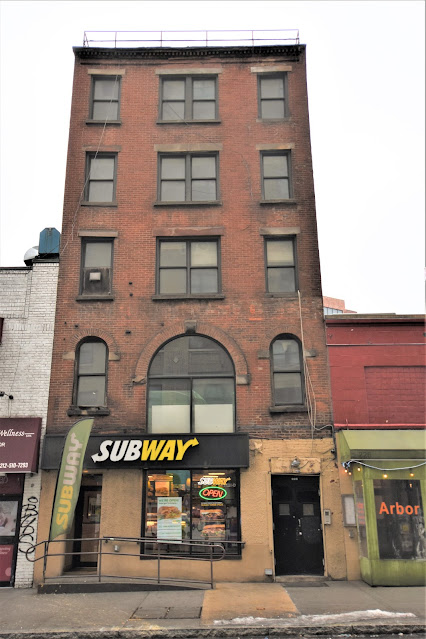 In 1862 Edward Senior hired builder William Owens to construct a "brick building" at 228 West Houston Street, running through the block to Downing Street.  Both streets were dotted with livery stables and Senior was about to add one more.
Faced in red brick, the two facades were identical.  The arched second floor openings wore brick eyebrows, while the upper floor windows were given simple stone lintels and sills.  The simple brick dentiled cornice was a cost savings to Senior.
Named the First National Stables, the commodious structure housed at least 14 horses and a variety of vehicles, including coaches, buggies, wagons, and carriages.  The upper floors provided housing for stable employees.
As aged or lame horses were no longer able to work, they were quickly replaced.  An advertisement in the New York Herald on October 13, 1868 offered: "For Sale--Four cheap horses at The First National stables, No. 228 West Houston street, near Varick."
The Washington Ice Company housed its wagons and teams at The First National Stables.  Work horses were often abused and overworked and this firm's drivers seem to have been especially uncaring for the animals.  On July 28, 1871 The New York Times reported "Six teams belong to this Company had been turned out one afternoon, all having sores under the collars."  The day prior to the article one driver, Charles King, had been arrested "for driving a team of horses before ice-cart No. 137...both badly galled under the collars."  (Galls were open sores caused by the constant rubbing of the leather collars.)
The First National Stables was lost in foreclosure in 1876.  The entire contents were sold at a mortgage auction on October 21.  Included were seven pairs of horses and a variety of vehicles.  Along with the expected carriages and wagons were two "large hearses," one child's hearse, a "covered coffin wagon," a doctor's wagon and a six-seat sleigh.
The business changed hands twice before 1886 when it was leased to T. Higgins, a partner in the Higgins & Dyer's livery stable.  Among its staff was 28-year-old John Brown who lived in an upper room.  On Saturday afternoon, December 18 that year, Brown had been drinking.  At around 3:00 he went next door to Margaret Kelliher's "little tobacco and candy store," as described by The Sun, to buy a package of tobacco.  What should have been a mundane errand turned ugly.
A Black man, he and the white shop owner got into a confrontation.  The Sun reported, "Mrs. Kelliher, who was alone in the store, says that Brown insulted her, and she ordered him out.  He came behind the counter, caught her by the throat, and struck her several heavy blows in the face, knocking her down.  He then assaulted her.  She tried to make an outcry, but he held her mouth shut."
Eleven-year-old Michael Moran walked into the store "just then, to buy two apples."  He ran to the street "scared half to death," said the article.  Using a racist term that would be unprintable in newspapers today, he told Policeman James Dunn that Brown was "killing a woman in here!"
Brown did not help his own case when he added robbery to assault.  Just as Officer Dunn approached the store, he ran out with the money drawer.  Brown dropped the till, scattering coins over the sidewalk.  He was caught two blocks away, and his excuse to Justice Gorman was not convincing.  "I was too crazy drunk to know what I was doing," he pleaded.  He was held on $2,500 bail awaiting trial--a staggering $70,000 in today's money.
In 1893 the two upper floors were converted for the cabinetry and woodworking factory of C. Boege & Sons, makers of saloon furniture like the bars and elaborate mirrored backbars that graced Victorian saloons and restaurants.   The firm remained here until around 1902.
That year the three-story stable portion was leased to the Senderling Co. and the upper floors became home to the Composition Decorative Company, makers of "plaster ornaments," like ceiling medallions.
The Composition Decorative Company left in 1905 and three years later the entire building was offered for lease.  The advertisement described it as a "five-story brick stable and lofts," with the annual rent of $550 per year (about $15,800 today).
Architect Michael Bardo was hired to update the building in 1923 for the Wilson Paper Stock Company, described by The Paper Industry magazine as "among the largest packers of waste paper in New York."  It would be used as another packing facility for the firm. 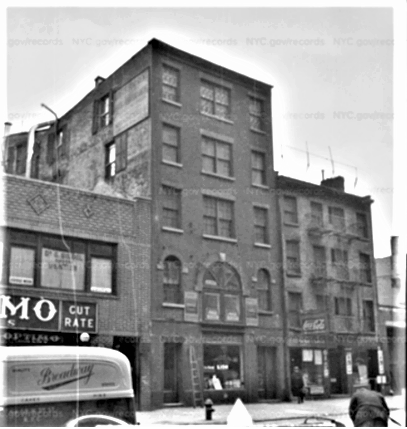 The carriage bay had been replaced by a show window when this photo was taken around 1941.  via the NYC Dept. of  Records & Information Services.
The onset of the Great Depression and the repeal of Prohibition brought change.  The Wilson Paper Stock Company left around 1932.  That year the ground floor became the Appraiser's Tavern, and by 1934 the third floor was a costume jewelry factory.   The firm advertised for "people engaged in home selling" that year, suggesting the jewelry was sold door-to-door.
By the mid-1940's Nathan Schectman's photographic case factory was in the building. 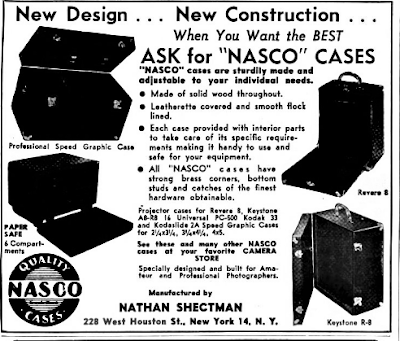 Popular Photography, January 1947.
Major change in the neighborhood resulted in the Prince Street Players Loft, an off-Broadway theater, here in the mid-1970's, while the ground floor held Martin's Bar & Grill.  The tavern was the scene of a terrifying incident on October 21, 1977 when three men walked in and joined a patron who had been drinking at the bar.  They displayed guns, forced the bartender and customers into the basement and locked them in.  Warning their captives not to come out for an hour, they escaped with $12,360.
Martin's Bar & Grill was replaced in 1988 by Brother's Bar-B-Q, known for its "smoked pork butt and pork ribs."  On April 13, 1994 The New York Times' food critic Florence Fabricant noted, "Brother's specializes in New Orleans-style barbecue, with plenty of hot sauce."  The following year Brother's Bar-B-Q moved to a larger space nearby on Varick Street. 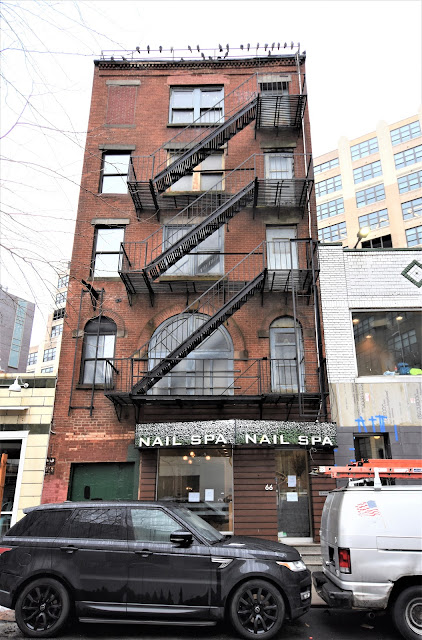 The Downing Street facade is identical to the West Houston Street elevation.
Today the space is home to a Subway sandwich shop on the West Houston Street side, while a nail spa occupies the Downing Street space.   Despite noticeable abuse, the venerable stables building retains much of its 19th century appearance.
photographs by the author
Posted by Tom Miller at 1:05 AM