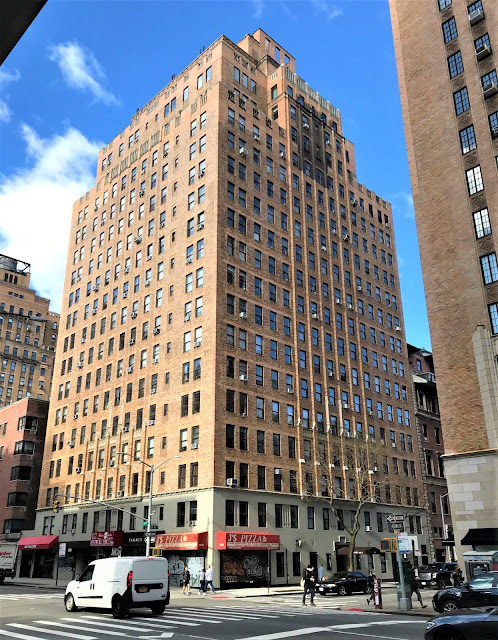 Henry Mandel started his career in his father's real estate development business, erecting tenement buildings.  But following World War I the Mandel Companies erected progressively larger, more elaborate projects.  His aggressive building plans culminated in 1929 when he laid plans for the block-engulfing London Terrace project on West 23rd Street and four architecturally similar apartment buildings on each of the corners of Seventh Avenue and 16th Street.

The Great Depression derailed Mandel's plans for the "Chelsea Corners" project and only three were built, all designed by Farrar & Thompson.  The architects married the Gothic and Jazz ages to create striking brick, limestone and terra cotta delights.
No. 200 West 16th Street, on the southwest corner, was 18 stories tall, plus a penthouse level, with 40 apartments per floor.  The two-story stone base, with stores along Seventh Avenue, was decorated with Gothic-style panels and whimsical tiles depicting mythical beasts.  The residential entrance was recessed within a Gothic arch and decorated with a square-headed drip molding, heraldic shields and another beast.  The upper floors rose to a set of dramatic Art Deco setbacks. 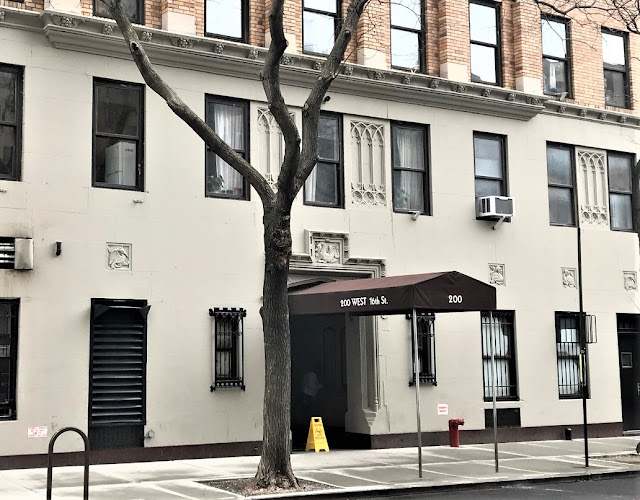 The building offered all the modern conveniences--uniformed doormen and elevator operators, a laundry in the basement, and electric refrigerators.  Prospective tenants had a variety of apartments from which to choose, from studios to larger suites.  The $40 rent for a studio apartment would equal about $670 per month today.
Among the initial studio apartment tenants were John C. Maurer, Jr. and his wife.  That they lived in a studio is somewhat surprising, since Maurer was the son of "Celery Jack" Maurer.  Maurer Sr. had begun his career as a fruit and vegetable shipper in Rochester, New York.  At a time when celery was not commonly used, he promoted it, becoming a pioneer in the celery industry and one of the largest celery distributors in the United States.  By the time he and his wife moved into the building, John Maurer, Jr. was the general manager of the firm.
The couple had not lived here long before Mrs. Maurer began noticing a peculiar recurring incident.  She would dutifully make up the Murphy bed every morning, fold it away, but then upon returning later in the afternoon would find it unfolded.  The mystery was solved when she came home unexpectedly in the spring of 1931.  She later explained, "One afternoon just about tea time I returned to our studio at 200 West 16th Street and found the bed unfolded and the lights lit, and my husband and a young woman there who was certainly not myself."
On May 7, 1931 the Daily News entitled an article "Celery Heir's Wife Sues Over Freaky Folding Bed."  According to the article she told the judge that when she walked in, her husband "was clad in gold pajamas and a lounging robe, while his fair companion had on less than a movie queen in a De Mille bathroom scene."  The couple divorced.
Another well-known tenant was Ed Frayne, the sports editor of the New York American.  He and close friends and associates Damon Runyon and Bill Farnsworth promoted boxing, most notably through the Hearst Milk Fund.  They lobbied promoters and managers to arrange fights, often at Yankee Stadium and the Polo Grounds, to benefit the fund.
Frayne's apartment was the setting of Damon Runyon's wedding to actress Patrice Amati Del Grande on July 7, 1932.  Mayor James J. Walker performed the ceremony which, according to The New York Times, "took place in the presence of many sports writers and friends of the couple."  Runyon's first wife, Ellen, had died the previous year and his teen-aged daughter, Mary, was present at the ceremony. 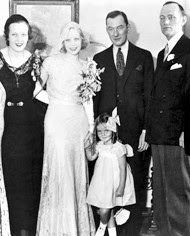 The newlywed Runyons pose after the ceremony.  To the right of the bride is Mayor Walker and to her left is her husband's daughter, Mary.  from the collection of the Damon Runyon Cancer Research Foundation.
Another newspaperman living here was Lyman Worthington, an advertising representative of The Daily News.  His wife was novelist and short-story writer Marjorie Muir Worthington.  Close friends of the Worthingtons were journalist William Buehler Seabrook and his wife, Katherine.
William Seabrook and Marjorie Worthington had met in Paris in 1926.  By 1932 when Seabrook laid plans for a new book on Africa, he had added explorer and occultist to his resume (in the 1920's he traveled to West Africa where he encountered a tribe of cannibals, later obtaining human flesh from a hospital which he cooked and ate).
When Seabrook again left for Africa to do research for a book in 1932, he took Marjorie Worthington along.  It was a hint of things to come.  On September 20, 1935, The New York Times wrote, "The marriage eight months ago of William Seabrook, author of books of travel and adventure, to Mrs. Marjorie Worthington, novelist and short-story writer, was revealed here last night.  At about the same time, it was learned, Mrs. Worthington's former husband married Mr. Seabrook's former wife."
A reporter arrived at the Worthington apartment at 200 West 16th Street, where Lyman confirmed he had married Patricia Seabrook "six or eight months ago," but would not give any other details.
Her marriage to Seabrook was Marjorie's third and this one, too, did not last.  She divorced him in 1941, citing "alcoholism and sadism."

Whimsical beasts decorate the 16th Street side.
Perhaps the most celebrated tenant of 200 West 16th Street was politician Vincent Richard Impellitteri.  Born in Sicily, he had married Elizabeth Agnes McLaughlin in 1926, two years after earning his law degree from Fordham Law School.   The couple moved into the four-room apartment 19-A in 1931.
Impellitteri was appointed President of the City council by Mayor William O'Dwyer in 1945.  Because of his steadfast stand against organized crime and corruption, the Tammany bosses refused to back him in his run for mayor in 1950.  He forged ahead, running as an independent, with the slogan "unbought and unbossed."  He won, bucking the long established system.
On September 2, 1950, The New York Times reported that Elizabeth was being "deluged" by good wishes.  She told journalist Madeleine Loeb, "I went down to the corner grocery store to buy a quart of milk and it took me one hour.  Everyone from clerks to customers, all old friends and neighbors, wanted to congratulate me at once." 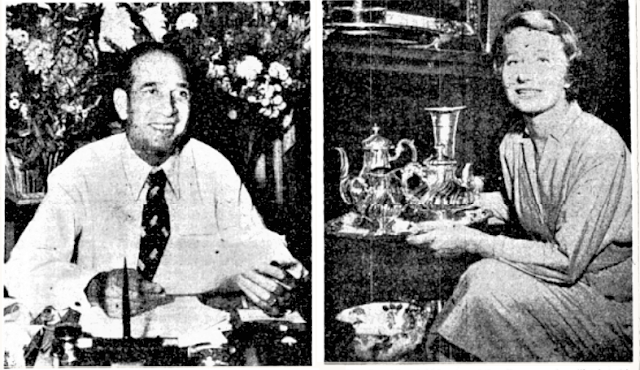 Vincent Impellitteri in his office and Elizabeth in their apartment in 200 West 16th Street.  She is displaying a tea service she said she would be taking to Gracie Mansion.  The New York Times, September 2, 1950
Helen Donaldson lived in the building by the early 1960's.  A character actress in television and on Broadway, she was as well, according The New York Times journalist Jean Hewitt, an "office manager for a leading woman's magazine, world traveler and cooking enthusiast."
Donaldson was well-known among her close friends for her homemade Genoise, a French butter spongecake, which she often served to her guests.  In an article published on June 8, 1964, Hewitt said that she "shares her apartment with a Siamese cat, prepares and serves her meals with care and entertains frequently at small dinner parties for six to eight and at large buffet parties."
Hewitt had come to 200 West 16th Street to interview the actress because her friends had finally convinced her to offer her Genoise for sale, at $8 each.  She cautioned she needed two day's notice on an order.
Donaldson's interest in cooking led her to collaborate with artist and professional dancer Jere McMahon--also an enthusiastic cook--in a cookbook, Measure for Measure.  It was written from a theatrical standpoint, with the preparatory steps of recipes labeled Act I, followed by Acts II and III. 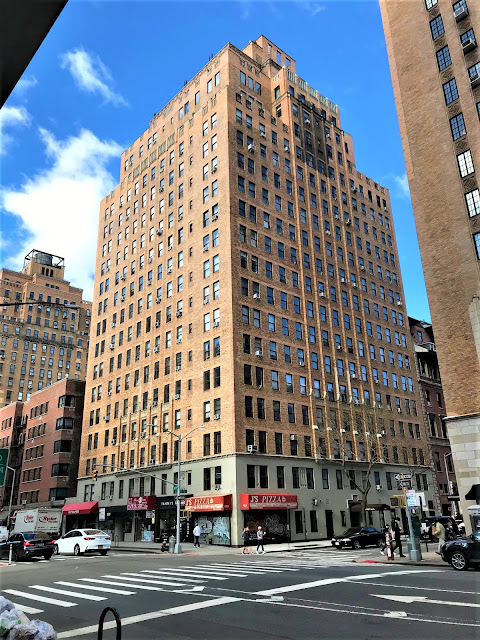 Although the limestone base has been painted gray, Farrar & Thompson's playful Art Deco take on Gothic survives mostly unchanged along with its two fraternal twins on opposite corners.
photographs by the author
Posted by Tom Miller at 2:33 AM