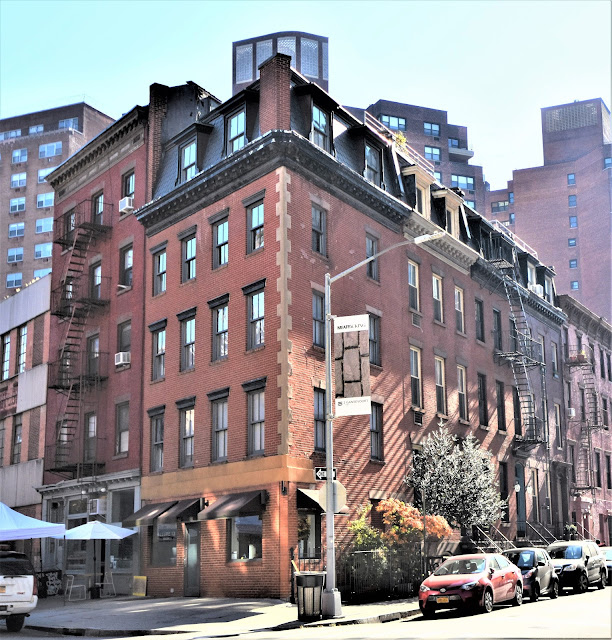 Matthew Kane was a highly successful sash (or window frame) maker in the mid-1860's.  He invested in real estate in 1868, completing a row of four upscale homes on West Fourth Street between West 13th Street and Eighth Avenue.  Designed by the prolific team of brothers David and John Jardine, the homes along West 4th Street were three bays wide and faced in warm orange brick and trimmed in brownstone.  Jardine & Jardine had designed them in the newly popular Second Empire style, transforming this block of Greenwich Village into a little slice of Paris.

The corner house stood apart from the others in that it held a store space on the West 13th Street Side.  Although it had the same proportions as the others, its wall of windows on West 13th Street allowed the architects to place just two openings on West 4th Street, creating more usable wall space inside.  The residential entrance took the address of No. 351 West 4th Street, while the store was numbered 308 West 13th Street.  Matthew Kane retained possession of the row, leasing all except No. 345 on the opposite end, which became his family's residence.
He leased the corner house to ]Marion Meredith, a printer, who also moved his business into the shop space.  The Meredith family took in boarders, their first being policeman Benjamin Christopher and Jeremiah Yereance, a carpenter.
The Merediths never took in more than two boarders, and like Jeremiah Yereance, they often came from the building trade.  It is possible that they were referred by Marion Meredith's landlord, Matthew Kane.  In 1878 and '79, for instance, carpenter Philip F. Beam and sashmaker Jacob R. Riley, lived with the family.
By the early 1880's the Graham family was leasing the house.  James and Adelia Ann Graham had been living nearby at No. 174 West 13th Street.  James made his living as a clerk in the city's Bureau of Inspection of Buildings.  Adelia Ann died at the age of 50 on July 31, 1881.  Her funeral was held in the house three days later.
James remained and in January 1885 was earning $1,200 per year in his city job--about $33,000 in today's money.  Another civil servant, M. Cassidy, lived in the house in 1895.  He was an "inspector of weights and measures."
In the meantime the former printing shop of Marion Meredith had become Hugh McCreedy's grocery store.  On the afternoon of August 26, 1897 John Martin, walked into the store.   The 44-year-old homeless man looked around, then when McCreedy's back was turned, darted out with six brooms.  He was arrested a short distance away, "making no effort to escape," according to The New York Press.
Hugh McCreedy stood in the courtroom as Martin appeared before Magistrate Simms on the charge of stealing.  His explanation touched the storekeeper's sense of compassion.
"Your Honor," he said, "I was hungry, and that's why I stole.  I wanted a night's lodging, a bite to eat and rest."
The New York Press reported, "McCreedy refused to press the charge and Martin was discharged."
Matthew Kane died around 1898 and on May 4, 1899 his heirs sold the row of houses to Pincus Lowenfeld and William Prager.  It appears that all of the homes were operated as boarding houses.  The residents of No. 351 West 4th Street continued to be respectable and hard working.
Matilda W. White purchased No. 351 from Lowenfeld and Prager around the time of World War I.  She owned numerous properties in the neighborhood.  Among her tenants in 1922 was the Rice family, who suffered a horrifying tragedy on January 28.
Evelyn Rice was six years old and her mother took her to the nearby motion picture theater that afternoon.  The Evening Telegram reported that just after the movie ended 20-year-old delivery driver John Hayes lost control of his truck, which "swerved to one side and leaped the curb at Fourteenth street and Eighth avenue and ploughed through a crowd leaving a motion picture theater."
Hayes told police that as he neared the intersection "a man and woman stepped into his path.  To avoid an accident he swerved toward the sidewalk."  It ended horrifically.  "The Rice girl was shoved into the path of the runaway truck and killed," said The Evening Telegram.  Four others were injured. 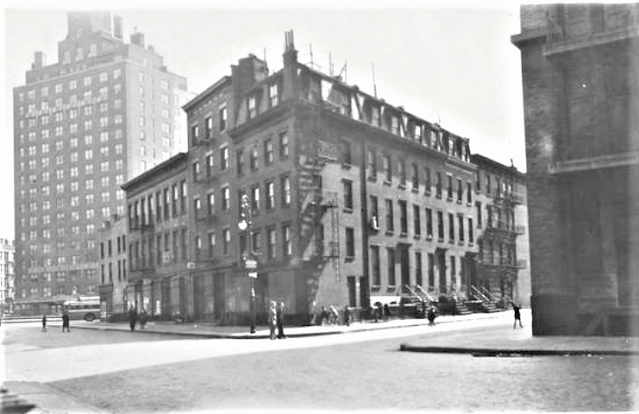 The large store windows were boarded over on March 12, 1933, quite possibly a result of the Great Depression.  from the collection of the New York Public Library
At mid-century there were four three-room apartments per floor in the house.  Among the residents was Morris Kessler, a retired hardware merchant.  He contracted pleurisy and was taken to St. Vincent's Hospital on May 17, 1954.  In a shocking turn of events, four days later the 64-year old "climbed through the window and dropped to the Eleventh Street sidewalk," as reported by The New York Times.  The plunge was fatal. 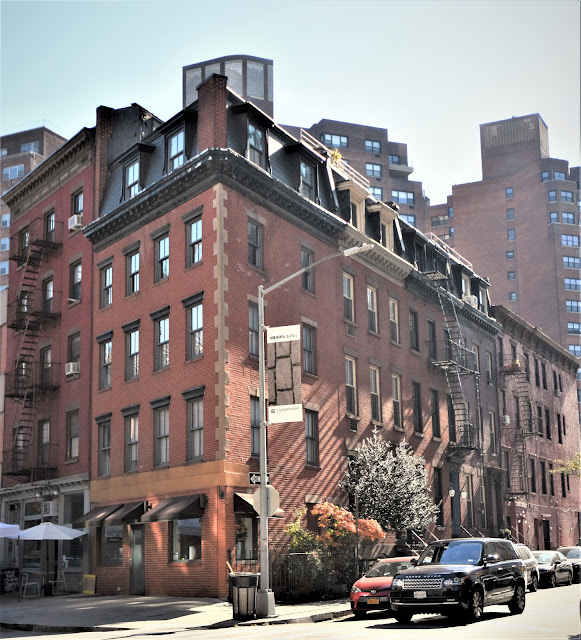 The store space held a restaurant in the 1950's and early '60's.  A renovation completed in 2004 resulted in two apartments, one a triplex, on the upper floors.  The storefront was removed and bricked over.  That space became home to the Thomas Heinz Salon in 2004, described by The New York Times as a "tiny, superprivate" hair salon.
photographs by the author
Posted by Tom Miller at 1:50 AM