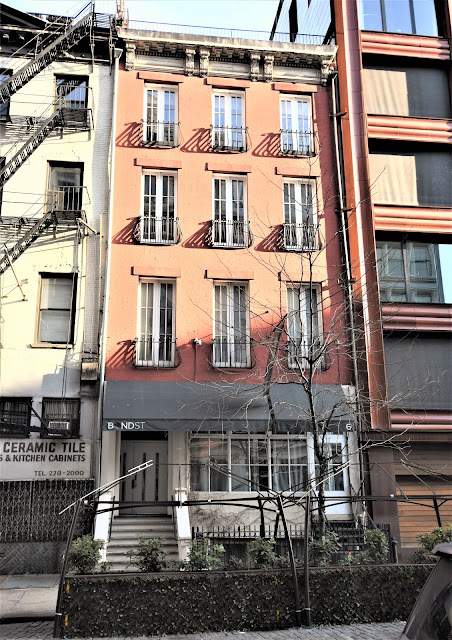 As fashionable society moved ever northward in the first decades of the 19th century, Nathaniel Weed purchased property in the developing Bond Street neighborhood.  In 1828 he began construction on an opulent Federal style house at No. 6 Bond Street.  Completed the following year, the 25-foot wide residence was three-and-a-half stories tall.  Its peaked roof would have held dormers.

Weed was head of Nathaniel Weed & Co. dry goods at 191 Pearl Street, and a director in the North River Bank and the Howard Insurance Company,  In 1837 he was appointed vice-president of the New York and Erie Rail Road.
Around 1843 attorney Francis Griffin and his wife Mary moved into the house.  They lived here for a decade.  Then in 1854 Mary was listed in city directories as "widow."  She sold No. 6 Bond Street to Guilford D. Sanborn that year.  A doctor, he lived in the house and opened his New York Lung Institute here.
On June 4, 1854 an announcement appeared in the New York Daily Herald that read in part:

This institute is established for the exclusive treatment of all diseases of the lungs and throat by the inhalation of medicated vapor, as the only medicated treatment; for no drug of any kind is given into the stomach.  The unparalleled success that has attended this system of practice is far great and more satisfactory than the old antiquated method of making a drug shop of the stomach.

Trow's New York City Directory, 1855-56 (copyright expired)
The New-York Daily Times published a long letter from Sanborn in December 1855 which outlined the importance of good nutrition.  It detailed proper foods, and in the paragraphs-long letter mentioned "all oils and fatty substances, including butter, and also sugar, starch and alcohol, are purely respiratory or carbonaceous food."  The Victorian editors seized on the single mention of alcohol to entitle the article "Alcoholic Drinks, In and of Themselves, Do Not Prevent Consumption."
Also living in the house were George Vandeuser, who worked in the Institute and also ran a perfumerie on Chambers Street, and a boarder, Charles W. Price, who worked as a clerk.
Suddenly at the end of 1855 the well-known Dr. Sanborn dropped out of the picture.  An announcement in the New York Herald dated January 26, 1856 declared:

New York Lung Institute, No. 6 Bond Street.  From and after this date this institution will be under the medical charge of D. D. T. Nestell, A.M.M.D., and assistants.  New and complete arrangements have been perfected for the convenience and comfort of our numerous patrons.  Noah S. Day Proprietor.

Dr. Daniel D. T. Nestell now lived above the institute along with George Vandeusen.  Charles W. Price was still boarding here in 1860 when The New York Lung Institute left.
No. 6 Bond Street was being operated as a respectable boarding house in 1861 by Christian Dietzsch and his wife.  Their white collar tenants included three importers, Max Bayer, Henry Flegenheim, and Isaac Ickelheimer; along with broker Louis T. Lehmeyer; optician Marcus Wise; and Charles Rubens, the head of the watch importing firm of Charles Rubens & Co.
The Civil War years saw the once exclusive Bond Street becoming increasingly commercial.  In 1863 the owner of No. 6, A. S. Hope, initiated a major modernization of the property by raising the attic to a full fourth floor adorned by a handsome Italianate cornice.
Christian Dietzsch and his wife continued to operate the boarding house, and their residents continued to be professionals.  Charles Rubens, who remained through the construction, was joined in the house in 1865 by drygoods merchant Samuel M. Cohen; importers, Jacob Goodmann, David Neumann, and Jacob Picardt; physician Bernard Segnitz; and "segar" merchant Leopold Wachenhelm.
In 1868 the basement level was converted for business.  It became home to Batchelor's Wig Factory, which also manufactured Bathelor's Hair Dye.  An advertisement in the Buffalo Morning Express on May 2, 1868 did not hold back on over-the-top self promotion:

Batchelor's Hair Dye--This splendid Hair Dye is the best in the world.  The only true and perfect dye--harmless, reliable, instantaneous.  No disappointment.  No ridiculous tints.  Remedies the ill effects of bad dyes.  Invigorates and leaves the hair soft and beautiful black or brown.  Sold by all druggists and perfumers; and properly applied at Batchelor's Wig Factory, No. 6 Bond street, New York

At the time James G. Aitken was operating the boarding house.  He would continued to do so until 1876 when he moved his operation to West 23rd Street.
In 1879 Eugene Regan converted the wig factory space as his restaurant.  It was a short-lived venture and the 1880 he transferred his lease to A. Lemoine who opened a saloon in the space.  In turn, Lemoine sold the lease to Arthur Reisendorf the following year.  With each transfer, the reputation of the business declined.
On September 24, 1881, The New York Times reported "Four months ago Arthur Reisendorf opened a concert saloon at No. 6 Bond-street, which became a nuisance to the neighborhood within less than a week.  Abandoned women of the vilest instincts congregated there, and their obscene language, coarse songs, and boisterous laughter were continued far into the night and often until daylight."  The article noted that nearby at No. 7 Great Jones Street George R. Bevans's invalid wife was kept awake "in consequence of the drunken orgies in progress in Reisendorf's saloon."
Bevans walked to the saloon to complain.  The New York Times said that the "injuries" he had already suffered were added to by "being abused by the saloon people for protesting against the noise."  He therefore took his complaint to the police who arrested Reisendorf.
The saloon appears to have been cleaned up and the upper floors converted to offices and a meeting space by 1883.  The ungainly named Committee on Public Exercises of the Memorial Committee of the Grand Army of the Republic met in the building on March 12, 1883 to lay plans for Decoration Day (now known as Memorial Day).  Among the results was the formation of a committee to go to Washington to invite President Arthur to attend the ceremonies.
Factories associated with the millinery industry operated from the upper floors.  I. A. Goldberg, maker of artificial flowers, employed 29 women and three men in 1896, as well as two boys under 18 years old and 36 teenage girls.  They worked a grueling 57-hour workweek.  Dennis Cunahan's millinery factory produced "pattern hats."
The address received bad press again in October 1905 when one office was raided for running a poolroom--the term for an illegal horse betting operation.  Despite the arrests made, the gambling joint continued, almost assuredly by bribing local police.  It was too much for one Brooklyn Police Commissioner, General Bingham.
Bingham had made it his mission to eradicate poolrooms and, despite its being far outside of his jurisdiction, he sent Second Deputy Police Commissioner Arthur J. O'Keefe to No. 6 Bond Street on October 7, 1905.   The Sun reported "He says he was treated most discourteously there."
George Monroe refused to allow O'Keefe to enter.  "But I'm a police official," said O'Keefe, "and it is my right to enter this place."  Monroe reportedly responded, "nothing doing."  Despite calling for back-up of an officer from the Brooklyn traffic squad, Monroe prevented their gaining entrance.  He was arrested, however.
General Bingham had provoked the ire of powerful Manhattan criminals.  On April 5, 1906 a reporter from The Sun asked him if he intended to resign.  "There is a well founded rumor that you are going to do so.  It is said that the big gambling interests of his city are behind a movement to oust you."  Bingham insisted he had no intention of stepping down.
The converted residence continued to house small factories throughout most of the 20th century.  The first signs of the Noho renaissance appeared in the late 1970's when Gallery Soho 7 opened in the former saloon space. 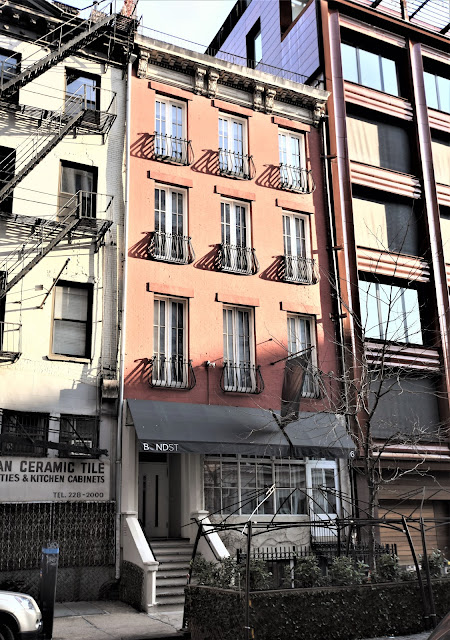 A renovation of the property completed in 1991 resulted in a restaurant on the lower three floors.  In 2002 the restaurant space was reduced to the first and second floors (home to the Bond Street Restaurant today), with living-working quarters for artists on the upper two.
photographs by the author
Posted by Tom Miller at 1:12 AM