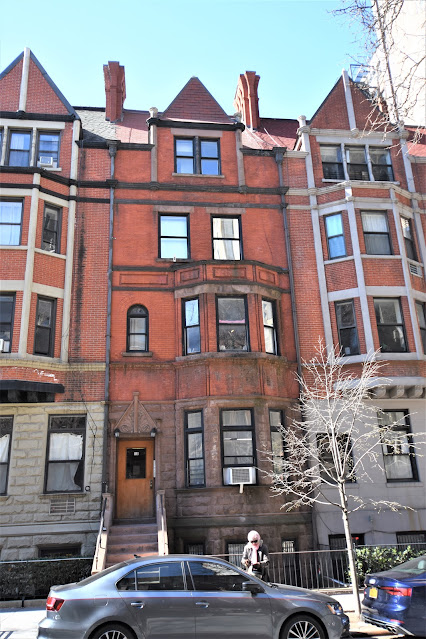 In its January 16, 1886 issue, The Record & Guide commented on the work of architect James Brown Lord, saying his groups of town houses "seem to diversify the monotonous architecture of the city street."  Some of those rows had been designed for developer Charles T. Barney.  The men worked together several times and the following year embarked on two more projects.

One of those involved four 20-foot wide houses on the south side of West 75th Street, between Columbus and Amsterdam Avenues.  Lord designed the playful Queen Anne row in an A-B-A-B configuration to create a visual feast of angles, shapes, and colors.
No. 158 was one of the "B" houses.  The basement and parlor levels were faced in undressed brownstone.  Its straight stone stoop led to the single-doored entrance below a whimsical triangular pediment.  A three-story angled bay provided added dimension and a prominent gable rose above the roof line. 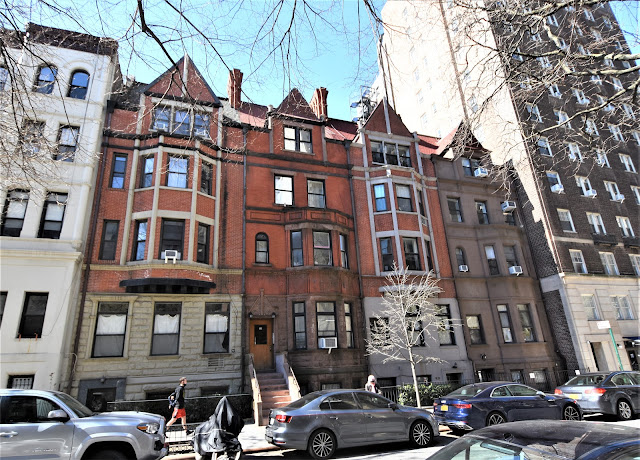 The house became home to the unmarried Grace Elizabeth Lynes.  Born in 1859 to Benjamin and Elizabeth Gemmel Lynes, she brought little attention to herself or her home.  A member of the Metropolitan Museum of Art, she seems to have busied herself more with cultural and philanthropic works than with social events.  Her life was not without social interaction, of course.  She traveled, for instance, to Maine in 1904 with a group of five friends.  On September 9, the Maine Woods reported, "if you want to meet a jolly crowd you want to visit Camp Maloma.  They are here for their first visit.  They are having a nice time and know how to have it."
Shortly after that Grace's widowed sister, Katharine Gemmel Bailey moved in.  Katherine's husband, Aaron Turner Bailey, had died in 1877 at just 27-years-old.  Their only child, Helense, had died two years earlier at the age of 3.
The sisters were members of the Daughters of the Revolution and worked in tandem in some of their charity works; each giving two chairs to the The Seamen's Church Institute of New York in 1914, for instance.  They seem to have entrusted their finances to the same agent, as well, as both were both stockholders in the Standard Oil Corporation.
In 1914 Grace offered the house for sale at $55,000--around $1.45 million in today's money.   She either changed her mind or simply could not find a buyer.  In either case, she converted her home to a rooming house.  She and Katharine continued to live here, while now sharing it with other families.
Her tenants all came from the arts.  Violinist Enrique Madriguera lived on the top floor and Teresa Carreño, daughter of the famed pianist of the same name, was in the basement.  On the parlor level was Rosa Culmell Nin and her three children, Angela Anaïs, Thorvald and Joaquín.
Rosa Nin was a classically trained Cuban singer who was separated from her husband, Cuban pianist and composer Joaquín Nin.  Angela, who went by Anaïs, was 12-years-old at the time.  She had started writing detailed journals about a year before they moved into their new home and would go on to write novels, short stories and erotica.  It was her journals, however, for which she would be best known.
She documented No. 158 in great detail, saying that her family lived on the first floor, "in what was once a parlor and dining room."  She noted that the home's original owners

...had lived sumptuously, with a kitchen in the basement, a pantry for the butler, maids' rooms on the top floor, a formal dining room overlooking a garden, a parlor full of mirrors, bedrooms with dressing rooms and luxurious bathrooms on the second floor.  Past bourgeois comfort was still visible in the elaborate lamps, rugs, and mirrors...My mother and my two brothers and I all slept in what was once the dining room.  We washed our faces in what was once the pantry, and used what was once the servants' shower next to the kitchen in the basement.

The Nins slept on Murphy beds which "became sedate bureaus by day," according to Anaïs's journal.  She recalled, "The house was full of gaiety, music, distinguished visitors.  José Mardones came to sing, Miguel Jovet played the guitar, my mother sang, my brother Joaquin studied his piano, Enrique practiced his violin." 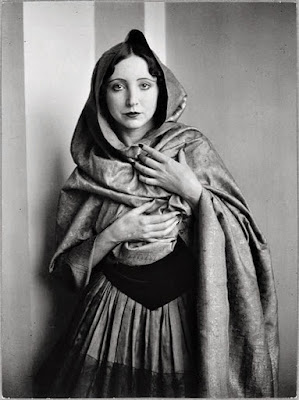 Anais Nin (original source unknown)
In The Nin family left No. 158 around 1918.  That year voice coach Margharita Hamill moved in.  On October 24 the Musical Courier reported, "Margharita Hamill, soprano, is teaching at her studio at 158 West Seventy-fifth street, New York, and already has a long list of pupils."
In 1920 Grace Lynes sold the house to Teresa G. Healy.  It was the beginning of a rapid turnover of owners.  Healy sold it in 1922 to Ida S. Primoff who sold it in 1925 to an investor. 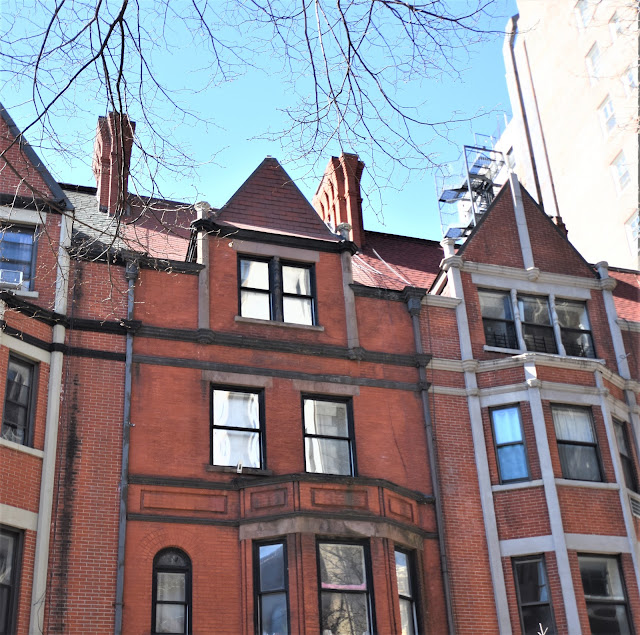 James Brown Lord used clustered chimneys to provide a romantic, historic feel.
Among the residents at the time were real estate developer George Dorfman, who owned a row of summer cottages in Rockaway Beach, and Earl Youst, who made his money in a less upstanding way.  On November 15, 1926 he was arrested as one of three men who attempted to burglarize the A. Hammer, Inc. fur shop on Broad Street.  After beating and tying up the watchman, Winfield Doran, the trio packed up $30,000 worth of furs, but Doran wrenched free and called for help, scaring them off before they were successful.
Two other residents found themselves on the wrong side of the law in 1935.  Charles Barton rented an office on West 34th Street and then placed "a misleading advertisement" in a newspaper, according to police.  He promised men jobs as clerks in a grocery store chain, then invited them to a congratulatory opening banquet, tickets to which cost $3.  When the men did not hear back about either the job or the dinner, they became suspicious.
On June 5 police went to Barton's office.  The 29-year old tried to escape, smashing Detective Thomas J. Coleman over the head with a blackjack and bolting down the stairs.  His escape was halted when Coleman shot him in the leg.  At the hospital he was charged with felonious assault and fraud.
At the same time 23-year-old entertainer William West rented rooms in the house.   He was part of an all-male nightclub show that summer, one which did not get the stamp of approval of Long Island authorities.
On August 23, 1935 The Suffolk County News reported that authorities, "determined to put a stop to entertainments of a questionable nature in road houses and resorts in the county, swooped down on the Wonder Bar Dance Hall at Lindenhurst early on Sunday morning and made eight arrests.  "Three officers were sent into the place and when the floor show had concluded their fellow officers were summoned," said the article.  Among those arrested was William West.  "The group was taken to Babylon Court in costume."
Marcus T. Monk did not help improve the reputation of the tenant list.  On May 21, 1937 he was arrested for issuing fake checks.   It was not hard to track him down, since the fraudulent checks were "in payment of room rent." 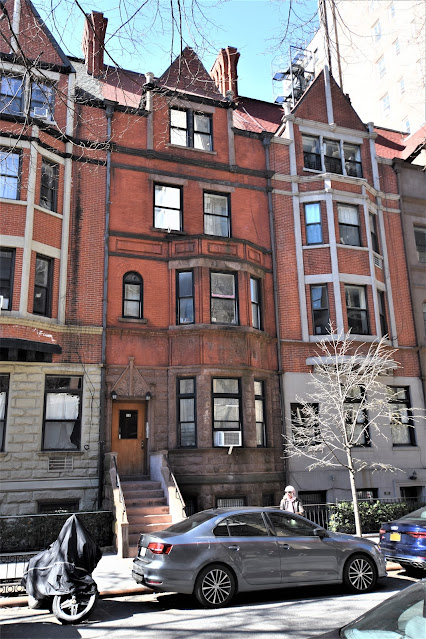 A renovation completed in 1991 resulted in two apartments per floor.  The Lynes house is the only one of James Brown Lord's row to retain its stoop.  Other than a gruesome replacement door and the loss of the stained glass transoms, it is remarkably intact.
photographs by the author
Posted by Tom Miller at 1:28 AM