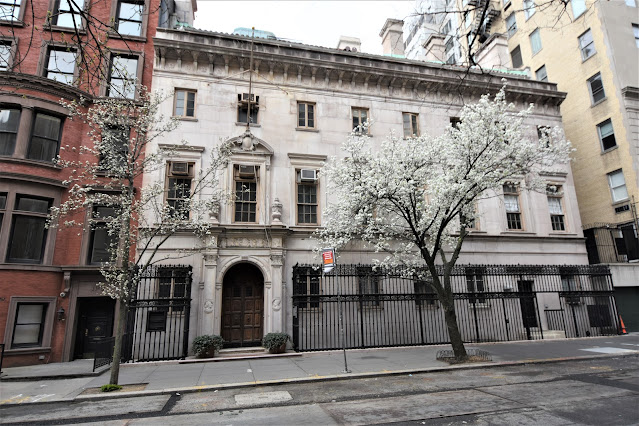 William Conrad Brandt was born in Muscatine, Iowa in 1891.  His father, George Washington Brandt, was a half brother of William Ziegler, described by the courts as being "childless, and a man of large estate."  On January 30, 1896, Ziegler adopted William and his sister, Florence.  It was a move that would drastically change the course of the five-year-old boy's life.

William Ziegler, by now, had amassed a fortune in the baking powder business.  He legally changed his adopted son's name to William Ziegler, Jr.
The younger William attended Columbia University and Harvard.  Like his father he became a yachtsman, and was equally passionate about horses and pedigree dogs.  A superb athlete, he participated in the 1912 Summer Olympics in the hammer throw and the shot put.
When William Ziegler, Sr. died in 1905, William received half of his father's $30 million (nearly $900 million today) estate.  He was by then president of the Royal Baking Powder Company and sat on the boards of several corporations.  He heavily invested in New York real estate, as well. 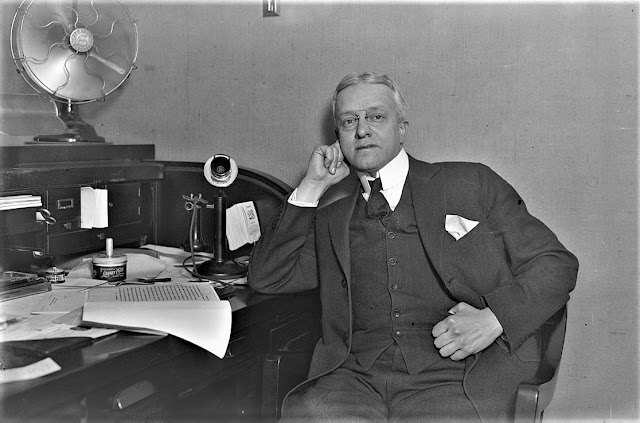 William Ziegler, Jr. from the collection of the Library of Congress
On December 11, 1912 William married Gladys Virginia Watson.  The couple had two daughters, Elizabeth Virginia and Barbara, and lived in a lavish apartment in one of William's Park Avenue apartment buildings.  But then on September 10, 1919 the New-York Tribune entitled an article, "Ziegler Tires of Flat Life, Will Erect Private Home."  He had purchased the three high-stooped brownstone houses at Nos. 2 through 6 East 63rd Street.
The Sun reported that for several years Zeigler "has cherished the ambition to own a palatial private residence in the vicinity of 'Millionaires row.'"  The New-York Tribune explained that his delay in building a private home was his desire "to see the [Henry] Frick house completed and to study its lines before undertaking the building of his own home."
Ziegler hired the architectural firm of Sterner & Wolfe to design a replacement mansion on the site.  There is almost no question that the design was handled solely by Frederick J. Sterner.   Plans, filed in November 1919, estimated the cost of construction at $200,000, or about $3 million today.
Completed the following year, Sterner had created a neo-Italian Renaissance palazzo--in some ways a larger version of the Cyril Hatch mansion he had designed a few years earlier at 153 East 63rd Street.  Like that house, it was low and understated, just three floors high at the front (a fourth floor to the rear is invisible from the street).  And like the Hatch residence, its architectural statement was the entrance and second floor window--a marriage of Italian Renaissance and Spanish Colonial. 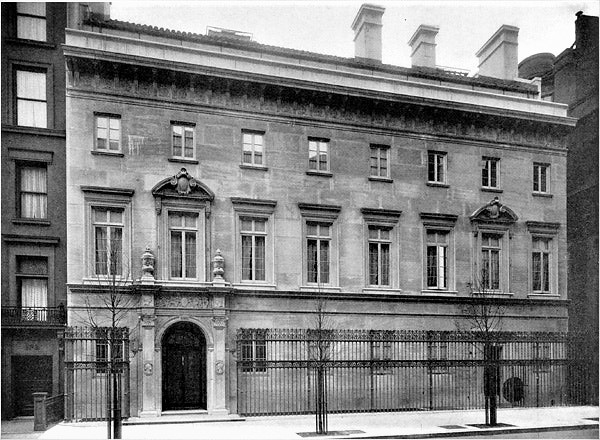 The American Architect, January 3, 1923 (copyright expired)
Sterner made interesting use of the plot, extending the structure to the back of the property line.  Instead of providing a small rear yard, he designed the house around a central courtyard, providing air, light and privacy. 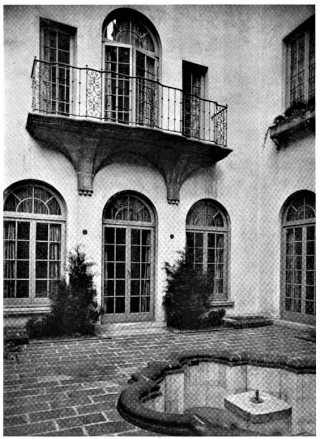 Architecture, December 1921 (copyright expired)
The first floor contained the living room, library and dining room.  The entire second floor was dedicated to the Zieglers' bedrooms suites.  The New York Times reported that some of the architectural elements were imported from vintage European homes--the library walls came from a 16th century English house, one Renaissance period mantel came from Florence, and a marble floor was brought from Tuscany. 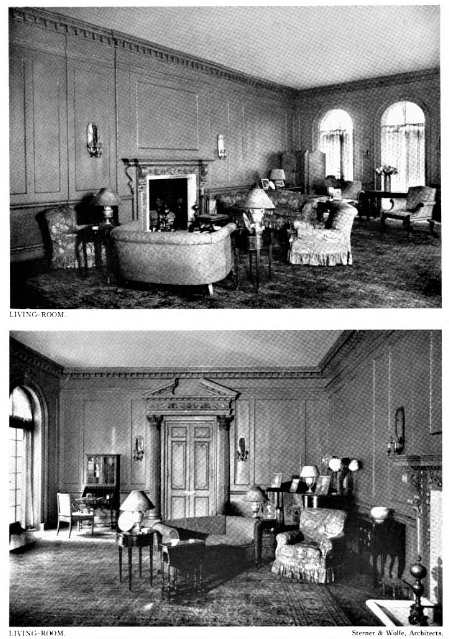 Two views of the living room, with windows onto the courtyard.  Architecture, December 1921 (copyright expired)
The Zieglers seem to have spent as much time away from their 63rd Street palace as they did in it.  Their summer estate, Great Island, was a 63-acre private island in Darien, Connecticut.  And the couple traveled extensively.  On January 23, 1921, for instance, the New-York Tribune called the Zieglers "newcomers" to Palm Beach, Florida, where they had just "leased the great house of the Hon. Mrs. Frederick Guest, of London, for the season." 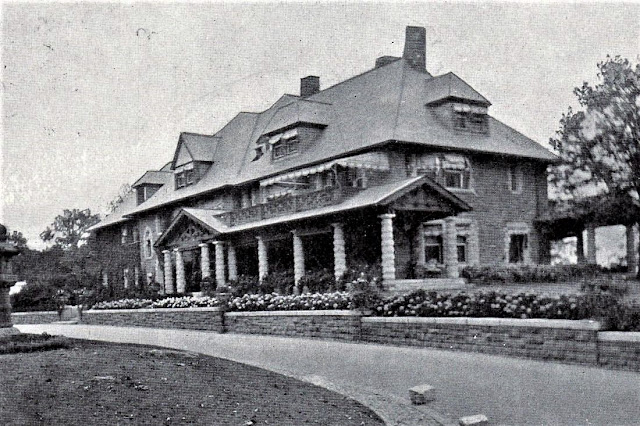 The main house on Great Island.  (original source unknown)
Perhaps shocking some people in society, on July 16, 1925, just five years after the Zieglers moved into No. 2 East 63rd Street, The New York Times reported, "The William Ziegler Jr. house at 2 East Sixty-third Street, one of the show places of upper Fifth Avenue, is about to be converted into a hospital for the exclusive use of actors and actresses."  Corporation papers had been filed the previous day for a $2 million "theatrical hospital" to be conducted by Dr. Max Rohde.  The Times Union added, "It is expected the hospital will be in operation in six months." 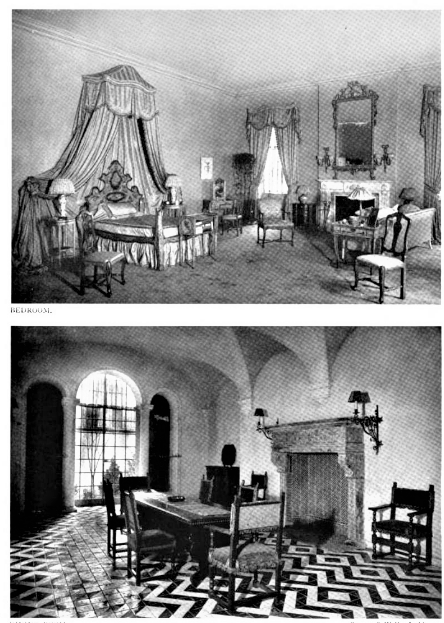 Gladys Ziegler's bedroom (top) and the Spanish-style family dining room.  Architecture, December 1921 (copyright expired)
The stunning announcement most likely had much to do with domestic tensions between William and Gladys.  Although the hospital plans never came to pass, almost a year to the day later The New York Times reported that Gladys had filed for divorce in Paris.  "Friends of the family said last night that incompatibility was the reason for Mrs. Ziegler's action," said the article.
"Incompatibility" was apparently a polite term for "another woman."  Within a few months of the divorce Ziegler married Helen Martin Murphy.  They moved into a house on East 55th Street where a baby, William Ziegler III, was born in June 1928. 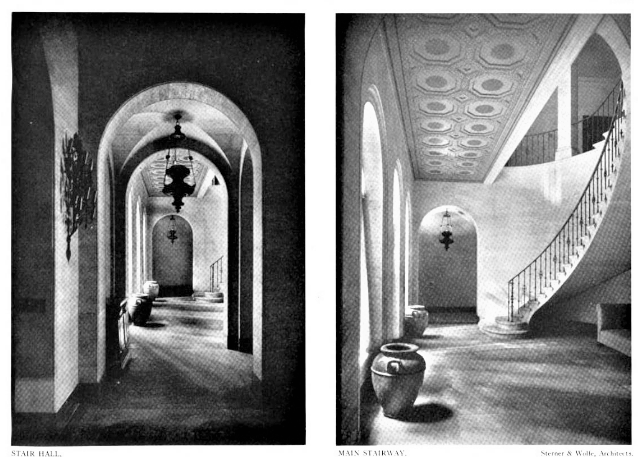 Architecture, December 1921 (copyright expired)
The 63rd Street house had sat shuttered in the meantime.  Then, the same month his son was born, Zeigler gave the mansion as part payment for the Hotel Belmont.  In reporting on the transaction, The Yonkers Herald noted that it was "said to have been built and decorated at a cost of $1,250,000."
Later that year the mansion was resold to Norman Bailey Woolworth and his wife, the former Pauline Elizabeth Stanbury.  Bailey was the son of Fred Moore Woolworth and Velma Bailey Woolworth.  Fred had been the head of the Great Britain branch of the Woolworth stores.  His cousin, F. W. Woolworth, headed the American end of the business.
The Woolworth country estate was Birchwood, a 28-acre property in Locust Valley, Long Island.  The main house was originally designed for Anson Wood Burchard by architect Howard Greenley.  According to The New York Times, the estate included "a twenty-eight-room and ten-bath house, garage, stable, kennels, greenhouse, dairy, poultry houses and cottages." 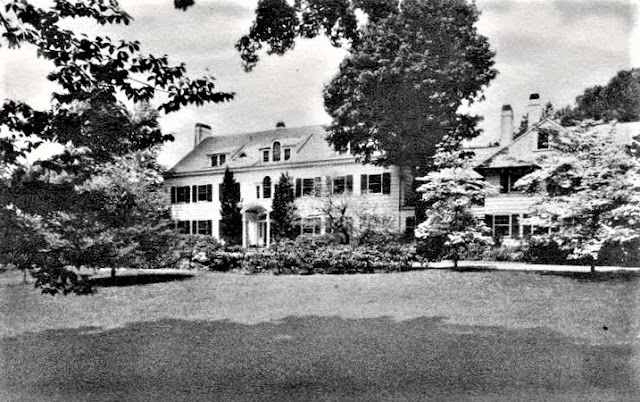 The main house at Birchwood.  photo from the brochure "Locust Valley Long Island," 1931.
The Woolworths entertained lavishly, Pauline's dinner parties and receptions routinely appearing in the society columns.  She was perhaps better known, however, for her work with the blind.  On October 23, 1946, for instance, The New York Sun reported, "The Seeing Eye organization launched its annual drive today for 1,000 new members with a meeting of 200 volunteer worker at the home of Mrs. Norman B. Woolworth, 2 East 63d street." 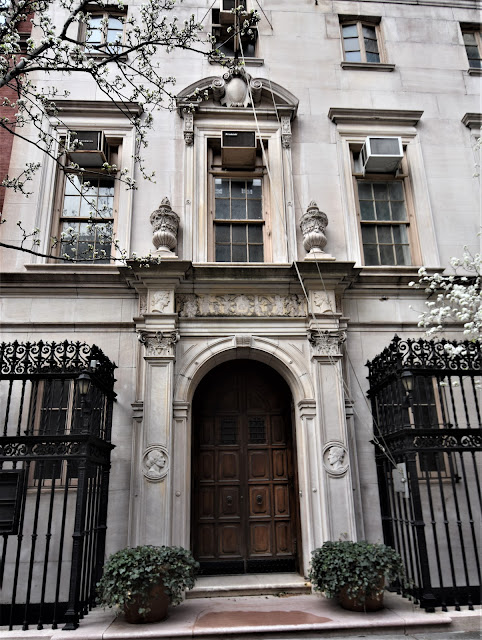 In 1949 Woolworth donated the mansion to the New York Academy of Sciences for use as its headquarters.  The New York Times commented, "Its rooms faced a central garden court and it had floors of black and gold marble."
A renovation completed the following year resulted in a "council chamber" and offices throughout the building.  And then, after operating from the former mansion for half a century, the academy placed the house for sale in 2005.  It was purchased by billionaire financier Leonard Blavatnik for $31.25 million.  According to a spokesman, he bought it not as a residence, but as an investment.
It was not until 2010 that plans were filed to return the mansion to a private residence.  Those plans have never been completed and the opulent mansion, once the scene of glittery parties, is apparently unoccupied.  A doormat at the servants' entrance (tagged by the Academy of Sciences, "Main Entrance") is still emblazoned with the letters NYAS. 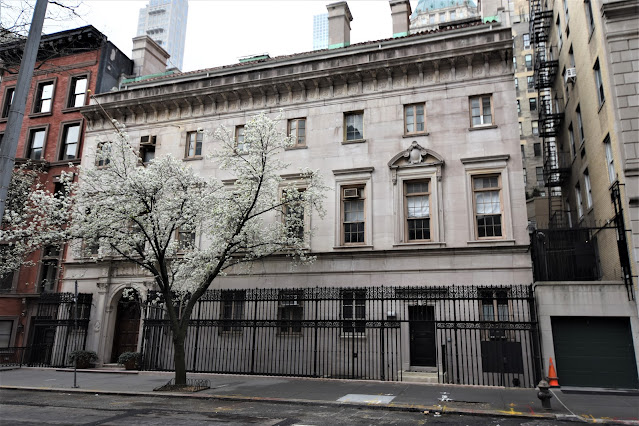 photographs by the author
Posted by Tom Miller at 1:18 AM