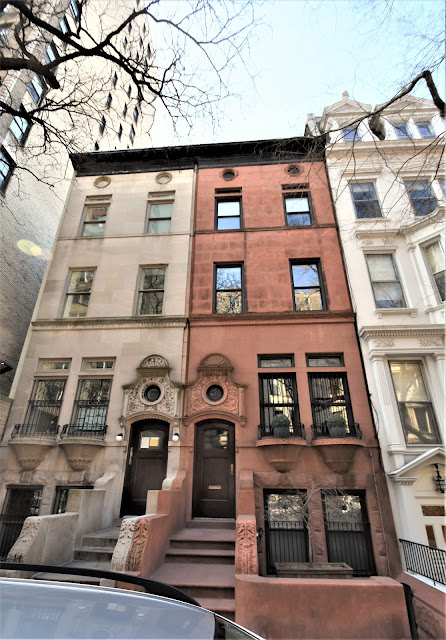 Luther Francis Hartwell began dealing in real estate in New York City in the early 1890's.  In 1893 he hired his brother, Horace Edgar Poe Hartwell, to design three 17-foot wide, stone-faced houses at Nos. 4 through 8 West 95th Street.
Completed in April 1894, the houses were designed in the Renaissance Revival style and lavished with Churrigueresque elements--decorations inspired by Spanish baroque style.  Nos. 6 and 8 were mirror-image (No. 4 was demolished in 1928).  Their side-by-side stoops were flanked by solid wing walls, their cascading forms decorated with foliate carvings.  The entrances were crowned by elaborate baroque panels, pierced by stained glass oculi that announced the street number.  Simple stained glass panels were set into the walls above the parlor windows, which sat above half-round bowls.  Two wreath-framed oculi provided light and ventilation to the attic level.

The upscale amenities of the residences were reflected in Hartwell's advertisement on October 29, 1893 as construction continued.  It described them as "Artistic Boston Houses," and detailed "marble walls, mosaic floors, fine cabinet work, Louis XVI parlors, old English foyer halls, First Empire dining rooms, nothing like them in the market."  The completed houses were offered for sale in April 1894 at $29,000 each--just under $890,000 today.
No. 6 became home to the Homer Dwight Mix family.  Born in 1846 in New York, Mix was described by the New-York Tribune as a "well-known horseman."  He had married Ella A. Frear around 1866.  The couple had a daughter, Anna, who was attending the Normal College when the family moved in.  She graduated in 1896 and stayed on there as a tutor of Latin.
Mix had made a substantial fortune as a private banker upstate, but failing health forced him to retire in 1878.  He moved his family to New York where he became interested in horses and was a major proponent of the Harlem River Speedway.  He owned the valuable and well-known thoroughbreds Ando and Silk Lace, among others.
On the rainy night of May 15, 1900 a "gray haired, shabbily dressed woman," as described by the New-York Tribune, rang the bell.  She was shown into the parlor where she told Homer that she wanted to see Anna.  Mix went upstairs to get his daughter, but when Anna came down the old woman was gone.  "Miss Mix immediately discovered the loss of a silver bonbon dish and a silver spoon," said the article.  She called her father who ran into the street after the woman.
Mix overtook her on the stairs of the elevated train at 93rd Street.  As Policeman Phelan headed to the West 100th Street station with her, she tried to throw the bonbon dish into a sewer, but Phelan was too fast for her.  The New-York Tribune added, "The silver spoon was found in her possession also."  The woman, Helen Martin, who described herself as an authoress, was locked up on a charge of larceny.
On February 1, 1903 Mix died in the 95th Street house.  His funeral was held in Binghamton, New York three days later.  Ella received the bulk of his estate, including the house.
Anna's period of mourning was barely over when she married lawyer Clayton R. Lusk on June 23, 1904.  The groom was a partner in the law firm of David & Lusk.
In the meantime, the house next door was the home of former police inspector Alexander S. Williams--one of the most colorful figures in New York police history.  He would later be described by The New York Times as having "received more public attention than any other man on the force."
Born in Nova Scotia in 1839, he had come to New York as a boy and joined the police force in 1866.  Transferred to the gangster-ridden 21st Precinct in 1868, he quickly earned the nickname "Clubber" Williams.  According to station house lore, on this third day in the precinct and fed up with the openly criminal behavior of the Gas House Gang, he purposely picked a fight with two thugs and clubbed them mercilessly with his baton. When other hoodlums tried to rescue their comrades, he pummeled them, too.
Supposedly over the next four years Williams engaged in at least one bloody confrontation per day in his efforts to clean up the neighborhood.  He was said to have tossed toughs through the window of the Florence Saloon and had the trademark philosophy that "there is more law in the end of a policeman's night stick than a Supreme Court decision."
By 1874 Williams had risen to captain.  Trouble had come that year when Police Commissioner Rhinelander Waldo convened the Lexow Committee in 1874 to investigate evidence of Williams accepting money and gifts from brothel owners and gamblers.  One madam testified that she paid $30,000 every year to the captain for protection.  Other women with lesser operations told of $500 fees to open a brothel and between $25 to $50 per house thereafter.  Pool rooms paid as much as $300 and high class gambling houses paid more.  Williams was partial owner in a brand of whiskey that saloons were forced to sell. 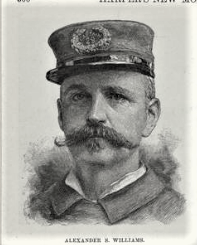 Harper's Monthly Magazine, March 1887 (copyright expired)
Amazingly, Williams had held onto his job until 1895 when Police Commissioner Theodore Roosevelt demanded his resignation.  He retired with $1 million in the bank, a yacht moored at his $39,000 private dock, a summer estate in Cos Cob, Connecticut and, now, a townhouse in a fashionable neighborhood.  (He explained that his fortune came from investing in Japanese real estate.)
He and his wife had two grown sons, Alexander, Jr. who was in the United States Marine Corps., and William H., who worked in the Customs Service.
Williams took advantage of the family's being at Cos Cob in the summer of 1900 to have work done inside the 95th Street house.  The rooms were repainted and redecorated.  The New York Times mentioned on August 9, "When the house was boarded up for the Summer early in July no one thought of turning the water off."
Something seemed wrong to one of the Mix's female servants in the first week of August.  The New York Times reported she told Ella "I don't know what it is.  It ain't burglars nor anything like that, but somehow I feel as if the ceilings were caving in.  I can't explain it.  It's just a presentiment."
When police entered the Williams house, they found a leaking pipe had created severe damage.  "The ceiling of the dining room, which is situated below the bathroom, had fallen in and the floor was covered with laths, plaster, and water.  The tapestries on the walls were soaking wet and had fallen down in portions, while almost all the furniture in the room had been disfigured by the falling plaster."  Williams rushed back and estimated the damages at $471,000 by today's standards.
On March 10, 1903, a month after Homer Mix died next door, The Sun reported, "Mrs. Alexander S. Williams whose husband is the former police inspector, found a three-weeks-old girl baby in the vestibule of her house at 8 West Ninety-fifth street last night.  The baby was sent to Bellevue."
Later that year the family received a scare.  On August 19 The Sun reported "Ex-Police Alexander S. Williams has been ill for several days with malaria."  He rallied and fully recovered. 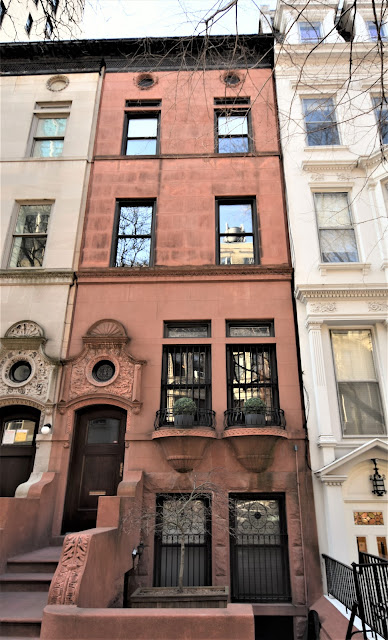 That would not be the case in March 1917 when The Sun entitled an article "Former Tenderloin Czar Slowly Dying / Alexander S. Williams, Once Police Inspector, Has No Chance to Live."  The article said, "It was said...last night that he might live until morning, that he might live five hours or five days, but that his death plainly is in sight."
He died on March 25.  In reporting his death the newspapers, of course, recounted his colorful past.  The New York Times noted, "During his turbulent career he won the nickname of 'Clubber.'  He was also called 'the Czar of the Tenderloin."  His funeral was held in the 95th Street house on March 27.
Even in death Alexander Williams managed to beat the system.  On January 30, 1918 the New-York Tribune reported that he left a traceable net estate of $13.49.  "He was believed to have a comfortable fortune when he retired," it said.
The Williams' next-door neighbors at the time were Dr. John Grant Coyle and his wife, the former Catherine Lennan.  They had purchased No. 6 from Ella Mix the previous year.  Born in Boston in 1868, Coyle had practiced medicine since 1891.  He was a historian, as well, and wrote The Irish in the United States; Captain John Barry, Father of the United States Navy; and General James Shields, Senator From Three States.
In 1899 he had become associated with Rose Hawthorne Lathrope, daughter of Nathaniel Hawthorne, who had established a home for incurable cancer patients in Hawthorne, New York.  Despite its Westchester County location, he served as its physician until his death.
A year after moving into the 95th Street house the 50-year old doctor proved his spryness when Thomas Duffy picked his pocket on the Eighth Avenue streetcar.  On August 11 the New York Herald reported, "Through his prowess as a runner and his agility as an athlete...Dr. Coyle got back a purse containing $22 in cash and a certified cheque for $350."
In 1920 Coyle was made State Deputy of the Knights of Columbus.  Through that position he was largely responsible for founding 36 college scholarships for Catholic youths.
In the spring of 1931 Coyle underwent an appendicitis operation.  Afterward he contracted peritonitis and died in the Misericordia Hospital on April 22.  Following Catherine's sale of the house, it was converted to apartments--one in the basement and two each on the upper floors--in 1948.
Artists Robert Rauschenberg and Susan Weil took an apartment in 1950.  It doubled as their studio. 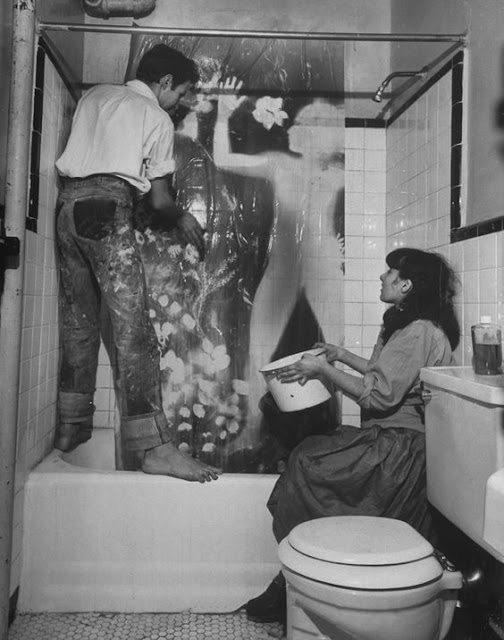 Rauschenberg and Weil in their apartment here in 1951.  from the LIFE Picture Collection
No. 8 survived as a private house until 1955 when it was converted to five apartments.  That configuration lasted until 1998 when it was returned to a single-family residence above a basement apartment.  No. 6 underwent a renovation completed in 1986 which resulted in a triplex in the basement through second floor, and two apartments on the third. 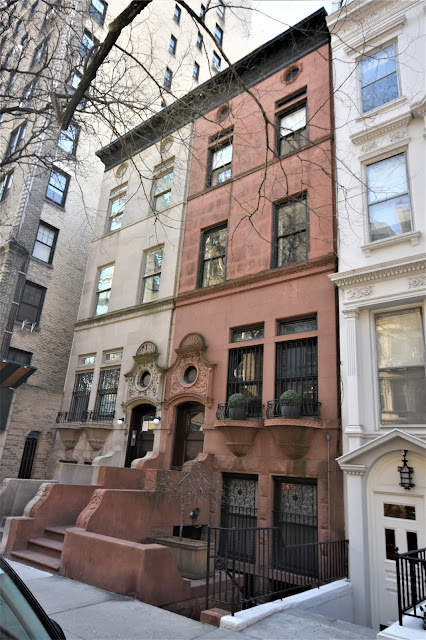 photographs by the author
no permission to reuse the content of this blog has been granted to LaptrinhX.com
Posted by Tom Miller at 1:11 AM