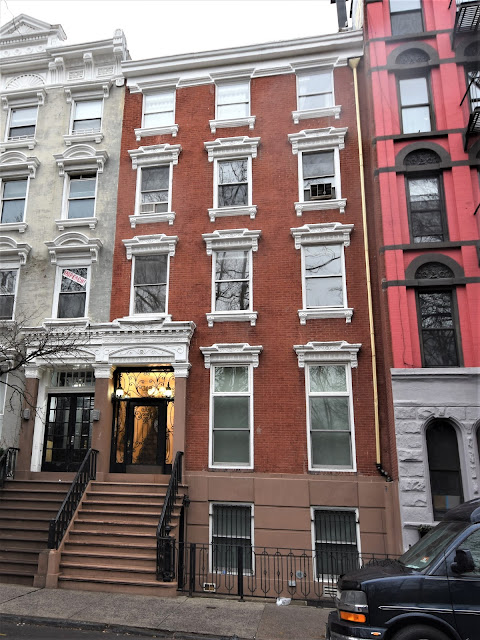 In 1847 investor Runyon W. Martin began construction of two mirror-image Greek Revival residences at Nos. 317 and 319 East 10th Street.  The builder, James C. Whitlock, may have been responsible for their design.  At four stories tall and 25-feet wide, they were intended for well-heeled families and overlooked Tompkins Square, which was still under construction (it would be opened in 1850).  The park guaranteed extra sunlight and breezes.
The completed residences were sold at auction on March 18, 1850.  No. 319 was purchased by real estate agent John Attridge.  His stay would be relatively short.  On April 29, 1854 the "whole of the furniture" was auctioned.  (It was common at the time for well-to-do families who were relocating to simply sell all their furnishings and start over in the new house.)
The house was purchased by Levi Shulman and became home not only to his family, but to his brother, Louis and presumably his family.  The men were partners in the boot and shoe business of Louis Shulman & Co.
Louis is no longer listed at the address after 1869 and the Shulmans began renting the extra space to German-born bachelors--never more than two at a time.  In 1872 and '73 two clerks were boarding with the family.  Other boarders over the next few years included painter Marx Steinhard, "segarmaker" Christopher Weipking, and drygoods merchant Joseph Kahn.
In the meantime, by 1878, the Shulman's son, Alexander, enrolled in the New York City College.  His aspirations--or possibly those of his father--were that he would not go into the family shoe and boot business, but became a doctor.
In 1883 it seems that Levi Shulman and his next-door neighbor, Andrew Carey, agreed to significant update their matching houses.  While it appears that the two used the same architect, since the elaborate paired entablatures over the entrances matched, the details differed elsewhere.  The windows of the Shulman house received Queen Anne style cast metal lintels and sills.  In contrast to the the exuberant pediment of the Carey house, the Shulmans' cornice remained relatively unchanged, its fascia cleverly accommodating the edges of the top floor windows. 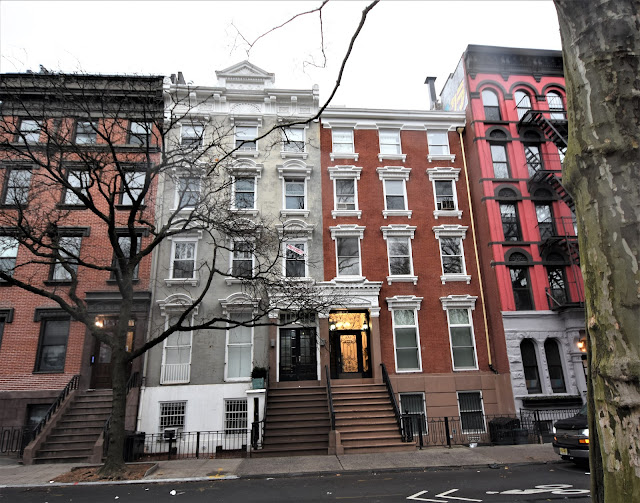 The formerly mirror-image houses received simultaneous updating in 1883.  Only the entrances matched in the two versions of Queen Anne.
The Schulman's boarders appear to have always been hard working, respectable men.  Until 1889, that is.  Max Hertz rented a room late that year and on December 19 police knocked at the front door.  A telegram had arrived at police headquarters from Boston saying that Hertz, alias Meyer, was "wanted in Boston for the larceny of $650 worth of sealskin sacks," as reported by The Brooklyn Citizen.  It was a significant haul, worth more than $18,500 today.  (Sealskin "sacks" were a type of ladies' jackets.)  Hertz was held at the Jefferson Market Court awaiting arrival of an officer to extradite him to Boston.
Alexander Shuman received his medical degree and was practicing from the house by 1890.  On February 2, 1892 he was called to No. 329 East 10th Street, just a few houses away, by the janitor's wife, Mary Kuehner.  She was concerned about a long-term tenant, Edward Steubendorf, who had been ill for several days.   She had been caring for him herself, but now worried his condition was more than she could handle.
The New York Times described Stuebendorf saying, "for a quarter of a century [he has been] known on the east side as an eccentric and miserly person."  He had an impressive background.  Born in Denmark, his great-great-grandfather had been physician to the King of Denmark.  The New York Times said "the family has always been well-to-do and respectable."  Steubendorf was educated in Europe and spoke seven languages.  He never married because as a young man he had fallen deeply in love with his cousin, Emma Steubendorf.  That family relationship prevented them from marrying one another, and they both went on to live solitary lives.
Steubendorf had lived in the building for 25 years.  Each morning he would slip out, trying not to attract the attention of the other residents, buy whatever food he needed for that day, then return to his upstairs rooms where he would bolt himself in.  If anyone rapped on his door, he would talk through it rather than opening it.
A recluse and a miser, he spent his days scrubbing his floors, studying his many books, and writing.  "He had no faith in mankind and none in God," said The New York Times.   His close-fisted habits led to his nearly dying in 1888.  Residents heard the sound of a body falling and gained entrance to his rooms through the fire escape.  The doctor who responded admonished him, "You are starving yourself to death."
He was taken care of by neighbors until he recovered his strength, "and then he chased them from his room," reported The New York Times.  "When I want you again I'll let you know," he said.
Now Alexander Shulman found a similar condition.  He diagnosed "an ulcerated condition of the stomach, due to improper and insufficient food."  He was frank with the 56-year-old, telling him he had little time left to live.  Stuebendorf sent for a lawyer who immediately made up his will.  The New York Times noted that "a pile of bank books was produced, and they showed Steubendorf to have in various city banks sums amounting to $9,000.  This whole sum he bequeathed to Mrs. Kuehner.
Stubendorf died hours after Dr. Shulman made his diagnosis.  Mary Kuehner inherited the equivalent of about a quarter of a million in today's dollars.  She was the only mourner at his funeral.
The Shulman family remained at No. 319 until 1903 when it was sold to Adolf Mandel.  Only two years later, on June 29, 1905, he sold it to Dr. Joel Chasis and his wife, Anna.   Chasis was an assistant genito-urinary surgeon at Bellevue Hospital.  The couple had four children.
The house continued its medical tradition when it became home and office to Dr. Gustave Nemhauser in the early 1930's.  Nemhauser had graduated from New York University in 1930 and by the mid-1930's had the satisfying contract as company doctor for the Yellow Taxi Corporation.
By mid-century significant change had come to the once exclusive block.  No. 319 was operated as unofficial apartments, still home to respectable tenants.  In 1956, for instance, Shuji Fujii lived here.  Born in Los Angeles in 1910, he was educated in Japan, in the City College of New York, Columbia University, New York University and the New York Community College. 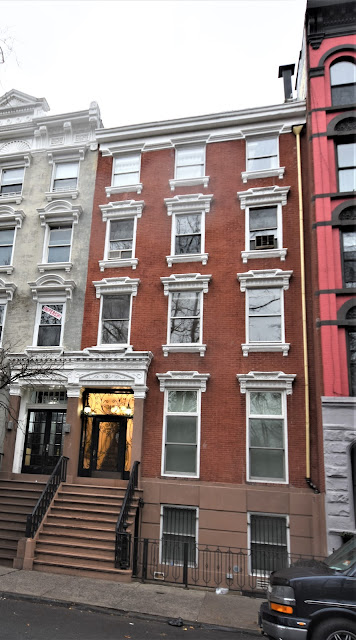 Today there are five apartments in No. 319.  Although the entrance doors and the windows have been replaced, overall the house retains its appearance following the 1883 remake.
photographs by the author
Posted by Tom Miller at 1:24 AM