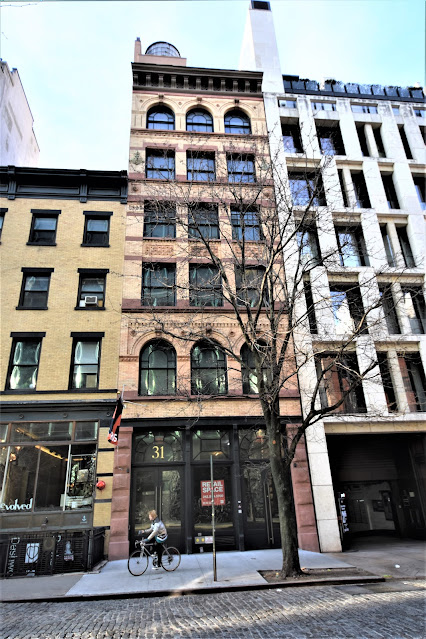 The brick-faced former mansion at No. 31 Bond Street was nationally infamous in 1887.  It had been the scene of the brutal murder of Dr. Harvey Burdell in 1857 and 30 years later no one had forgotten.  It was perhaps its gruesome reputation that resulted in a rapid turnover of owners.
On January 15, 1887 the Mutual Life Insurance Co. sold the property to Siegmund T. Meyer for $22,500.  Within four months he reaped a tidy profit by reselling it to John N. Hayward for $35,000.  The game of realty hot potato came to an end the following year, on  September 5, 1887, when Abraham Wolff purchased it for $36,000--just over $1 million in today's money.  Wolff was a founder of the investment banking firm Kuhn, Loeb & Co. and he recognized the changing personality--and opportunity--of the Bond Street neighborhood.
He hired the recently-organized firm of De Lemos & Cordes to design a replacement building.  The partnership of Theodore de Lemos and A. W. Cordes would go on to produce massive commercial buildings, like the Siegel-Cooper department store building on Sixth Avenue and the Macy's department store on Herald Square.  But their commission to replace the Bond Street house for Abraham Wolff would be significantly less grand.
Completed in 1889 the six-story loft and store building was faced in beige brick above a granite-and-iron base.  The upper floors were trimmed in brownstone and color-matching terra cotta.  The arched openings at the second and sixth floors and delicate decoration prompted the Real Estate Record & Builders' Guide to deem the structure "a fine business building."

Federal style former mansions, with marble stoops and trim, survived on either side of the new building.  Real Estate Record & Guide, May 10, 1890 (copyright expired)
The initial tenant was Hornthal & Co., manufacturers of "coffins and caskets."  The firm was run by Joseph Hornthal, his brother-in-law Moses Hatch, and William J. Noble.  It held a patent on the innovative "ice casket."  Decades before air conditioning, when bodies lay for two days in the parlors of their former homes, conditions could become unpleasant in hot months.  The casket held a compartment to hold ice, helping to cool the body and slow decomposition.

This model also came with the amenity of a fold-up viewing window over the corpse's face.  (copyright expired)
Interestingly, before many years Hornthal & Co. would change from manufacturing coffins to building hearses.
Following the departure of Hornthal & Co., there were several tenants in the building at the century, all of them involved in the millinery or apparel trade.  In the first decade of the 20th century it was home to firms like Dauziger Bros., skirt manufacturers; A. Smith, hat "ornaments';" women's hat maker H. Seller; W. Tompkins & Co., makers of flowers and feathers for women's headgear; and the Paris Millinery Supply Manufacturer. 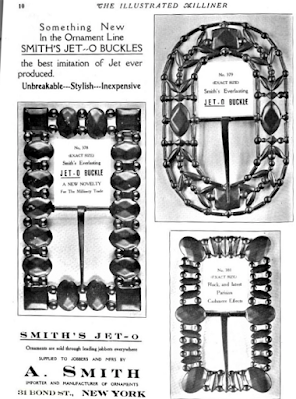 A. Smith manufactured accessories for apparel makers here.  The Illustrated Milliner, July 1910 (copyright expired)
Nothing changed until the Depression years when around 1935 Max Goldberg, a "dealer in rags," and Goldseal Textiles took over the building.   The two firms remained for four decades, until 1975 when Yasuko Harada purchased the building for the newly-organized Kampo Cultural Center, a branch of the Japan Calligraphy Education Federation.
The organization initiated a renovation, completed in 1987.  It resulted in a multipurpose gallery and recording space on the first floor, a recording studio on the second, a video room and classrooms on the third and four floors, and artists' joint living-working quarters on the two upper floors.
The first floor venue was the scene of presentations, like the concert in October 1987 by Japanese koto (Japanese zithers) player and composer Tsutomu Sakamoto.
A subsequent renovation, completed in 2019, resulted in offices throughout.  De Lemos & Cordes's handsome commercial building, which erased the memory of a grisly murder, survives with little change.
photograph by the author
Posted by Tom Miller at 1:07 AM