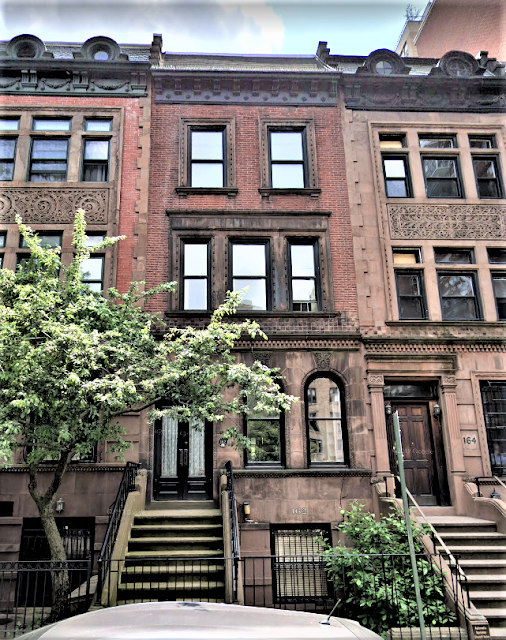 In May 1891 the Record & Guide reported that Walden P. Anderson was erecting a row of 13 three-story dwellings on  the south side of West 94th Street, between Amsterdam and Columbus Avenues.  The cost of constructing the row would cost the architect-developer $195,000--or about $5.65 million today.

Anderson created three different designs which were mixed with no apparent pattern along the row.  The "C" design, of which No. 162 was an example, was a little less flamboyant that the others, yet managed to meld three architectural styles--Romanesque Revival, Renaissance Revival and Queen Anne.
The parlor floor sat above a high stone stoop.  Here the arched openings were decorated with carved keystones.  The keystone above the entrance depicted an owl.  A delicate double row of dentils ran below the second floor, where grouped windows sat above a base of Queen Anne style tiles.  Applied rosettes decorated the bracketed cornice and stepped gables--a nod to Flemish Renaissance Revival--separated the attic level from the adjoining houses. 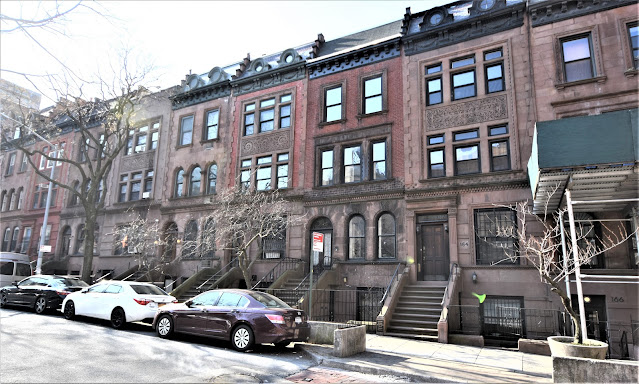 Anderson's three designs were mixed with no apparent pattern along the row.  No. 162 is behind the maroon automobile.

No. 162 briefly became home to the Harris family, whose son, Leo Pinner Harris, was attending the Free Academy of the City of New York in 1891.  The family lost the house in foreclosure and it was sold by the bank in January 1897 to Dr. Samuel Wood Dana and his wife, Helena R.  As was customary, the title to the property was put in Helena's name.
Dr. Dana was born in West Lebanon, New Hampshire in 1827.  He studied at Dartmouth Medical College and graduated from the College of Physicians in New York City in 1858.  He and Helena were married in 1865.  Their only son, Russell Raymond, had married Hattie Amanda Styles in 1892.  Both of their daughters, Helen Edith and Emma Lilian, were unmarried and also moved into the 94th Street house.
Emma (who went by E. Lilian) had graduated from Normal College in 1894.  She had been not only a remarkable student but an accomplished pianist.  On the same day, June 21, 1894, she had won the $20 gold prize for her essay on Patriotism and the esteemed Steinway Prize for piano.  She was now serving on the Normal College faculty as an instructor in the Training Department. Dr. Samuel Wood Dana, Where Greek Meets Greek, 1907 (copyright expired)
The erudite Dr. Dana filled his library with classical literature.  In 1898 a former classmate, Rufus O. Mason, said of him, "now, more than forty years out of college, he reads with facility and enjoyment the Latin and Greek authors, and also the standard authors in German, French, Italian and Spanish."  In addition to his private practice he was connected with the New York Dispensary.
On June 2, 1905 Helena Dana died in the 94th Street house.  Her funeral was held in the parlor on June 5.  Dr. Dana retired three years later, and died on September 1, 1915.
On January 26, 1918 the Record & Guide reported that the Dana estate had sold No. 162 West 94th Street to William G. and Catharine L. Dunn.   The couple had one son, William Kipson Dunn.
Dunn was a partner in the liquor and wine firm of Kerin & Dunn.  He was no doubt deeply concerned about the Temperance Movement which had been gaining strength across the nation.   And those concerns were well founded.  Exactly a year after moving into his new home Prohibition was ratified and a year later, on January 17, 1920, the Volstead Act went into effect.
That year, on May 8, Catherine Dunn died.  Her funeral was held in the Holy Name Church at 96th Street and Amsterdam Avenue two days later.
It was possibly the financial effects of Prohibition which prompted William and his son to soon leave No. 162.   By 1923 it was home to Harold Jones and his wife, Dr. Mary Cover Jones.  Born in 1897, Mary had attended Vassar College where she studied psychology, and completed her graduate work at Columbia University in 1920.  She and Harold met at Columbia and were married in 1920.  They had two daughters, Barbara and Leslie.
The family moved to California in 1927 where Dr. Jones had accepted a position as research associate at the Institute for Child Welfare at Berkeley.  She would eventually be called "the mother of behavior therapy" for her pioneering work in behavioral therapy.
The West 94th Street house was purchased by Joseph and Alta Brady Armengol in July 1930 for $25,000 (about $383,000 in today's money).  The New York Sun noted, "The purchaser, a physician, will occupy the premises."
Born in Spain in 1896, Dr. Armengol's had anglicized his name from Jose Maria to Joseph M.  The couple had two children, Joseph, Jr. who was 5-years-old when the family moved into the 94th Street house, and Dian, who was 3.  Living with them were a housekeeper and an "attendant."  The family maintained a summer house in Long Branch, New Jersey.
In June 1936 Alta was looking for a new housekeeper.  Her ad read "Wanted--Girl for general housework and cooking.  Fair [wages] paid.  Mrs. A. Armengol, 162 West 94th St." 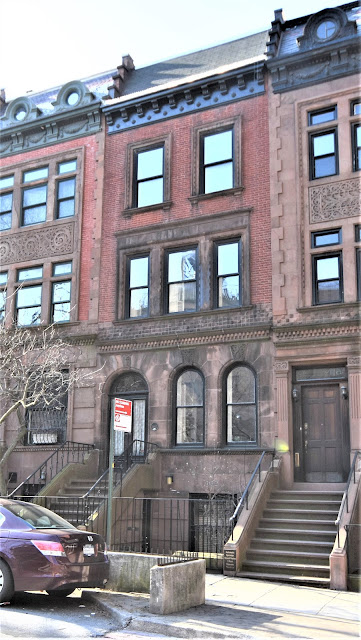 It is unclear how long the Armengol family remained in the house; although census records show them here as late as 1940.  Perhaps because of its narrow proportions--just 17-feet wide--the house has never been converted to apartments and remains a private home today.
photographs by the author
Posted by Tom Miller at 1:11 AM