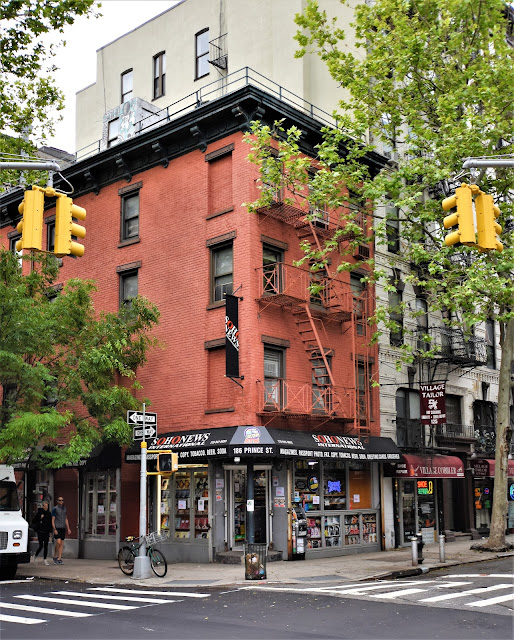 It was not until around 1830 that Henry Hopper began construction of a Federal-style house on the lot.  Two-and-a-half stories tall, it was faced in red Flemish bond brick and trimmed in brownstone.  The attic floor would have had tall dormers and a short stone stoop would have risen to the entrance.

If Henry Hopper, who made his living as a cartman, ever lived in the house it is unclear how long.  But by the first years of the 1840s it was home to the Hallenbeck family.

Hallenbeck was involved in a disturbing incident on June 26, 1841.  The New-York Tribune reported three days later "As Mr. Hallenbeck, who resides at 129 Sullivan street, was returning to the city on Saturday evening last, on the Bloomingdale road [known as Broadway today], about 5 miles from the city, he accidentally run over a child, which was lying in the road."

Hallenbeck stopped and "paid every attention to the little sufferer."   The little girl, Mary McGillen, belong to a local Irish immigrant family.  Rather surprisingly to modern readers, although Hallenbck supposed that the child "could not survive long," he left after deciding she was being well taken care of.

On Monday morning he went to the Coroner's office and told his story.  He was surprised to hear that the accident had not been reported to the Coroner, since he was certain the girl had to be dead by now.  An investigation showed that Alderman Bradhurst had already held an inquest, without the Coroner's presence.  The conclusion was that "The jury found that she came to her death by being run over by a carriage, unknown to this jury."

The reporter for the New-York Tribune was irate--apparently to the point of destroying his grammar skills.  "Had Ald. Bradhurst taken the trouble to make the necessary inquires who the gentleman was that run over the child, or had he even sent for the Coroner himself, the public would have had before them the whole of the particular in relation to this affair, as the Coroner or his deputy was at his office, and could have been found at any moment."

Before 1850 John Christopher Hashagen and his family moved into the house.  He transformed the parlor floor for his grocery store and extended the building to the rear.

Hashagen was born in Hanover, Germany on August 31, 1814 and was married to the former Friederike Charlotte Meredith.  The couple had five children, including Caroline who was born in the house in 1850.  The family lived above the store.

The extension was apparently used for the meetings of Hashagen's club.  On July 15, 1851 The New York Herald announced "The Old Tops of the Eighth ward will go on their next annual chowder excursion, to Sheep's Head Bay, on next Wednesday, the 16th of July.  They will start at 4  o'clock, A. M., from their headquarters, John C. Hashagen's, corner of Prince and Sullivan streets, with Kipp & Brown's splendid six horse stage."

The use of the stage made the chowder excursion doubly pleasurable for the men.  Coaching in the mid-19th century was a fashionable pastime for upscale groups.  The Herald added that "N. B. Reuben drives."

It would appear that a relative or friend of the Hashagen family from their homeland was staying here in the spring of 1854.  An advertisement in The New York Herald on March 10 read "A respectable young girl, lately arrived from Germany, wishes to obtain a situation in a genteel American or German family.  She would like to go as chambermaid of seamstress.  Has a good knowledge of the French language.  Satisfactory references as to respectability."

A similar advertisement appeared 11 years later.  On November 14, 1865 the same newspaper ran the ad "Wanted--By a respectable German girl, a situation as waitress or chambermaid in a private family."  The girl used the address of the side entrance leading upstairs, No. 186 Prince Street.


The following year Hashagen raised the attic level to a full third floor; and in 1869 added a fourth floor and an up-to-date Italianate cornice.  Interestingly, in both renovations the Federal-style paneled lentils were reproduced, providing an architectural cohesiveness.

In 1870 Caroline, who was known as Carrie, married John A. Meredith.   Carried was 19 years old and her groom was 28.  Tragedy visited the young couple on July, 18, 1873 when their one-year old son, Walter Hashagen Meredith, died "of cholera infantum."  The now-rare disease attacked young children, most often in congested neighborhoods and during periods of high heat and humidity.

The heart-breaking funeral of the toddler was held in the Hashagen's Prince Street house the following Sunday afternoon.

John Hashagen's business apparently flourished.  In 1876 he rented space in H. F. Kahrens's stable on No. 209 Sullivan Street for his horses.  The $1,019 lease would equate to more than $23,000 today.  The need for a team of horses, most likely for delivery purpose, might reflected Hashagen's change in businesses.   By 1882 he was listed as "furniture" rather than the grocery business.

On August 3, 1880 a society journalist for The New York Times gushed on about a new and fashionable resort, Richfield Springs, New York.  The writer insisted that there "shoddyism" was unknown.  "The 20 or more hotels and boarding-houses have accommodations for between 2,000 and 3,000 strangers, and they are all full to overflowing, mainly with New-Yorkers," she said.  "A striking feature of the attendance is the high social standing of the visitors."

John and Friederike Hashagen had come far from the day they stepped off the steamer from Germany.  Among the guests at the Park Place Hotel, where "the ladies dress richly but sensibly" were the Hashagens.

The couple's elevated status no doubt contributed to their leaving the Prince Street building they had called home for three decades.  In 1883 J. Kroeger paid $75 for his excise license, allowing him to transform John Hashagen's former grocery store into a saloon.

The building was owned by J. Rennan in 1886, when he constructed a "two-story brick storage" building a block away at the corner of Prince Street and South Fifth Avenue (later renamed West Broadway).

As the neighborhood filled with immigrants by the turn of the century, No. 186 Prince Street became a rooming house.  The tenant list was made up of mostly Italian surnames, like that of Paola Alfieri who died in her room on February 19, 1903 at the age of 64.

Unfortunately, while the majority of the new Italian-Americans were hard-working, blue collar citizens; their reputations were stained by the violence and criminal activities of others.  In the first years of the 20th century violent anarchist groups like La Mano Nera (or the Black Hand) and syndicates like the Mafia and Comorra wielded power and terror throughout most of the century.

On June 24, 1927 at around 4:00 in the afternoon, a five-alarm fire raged in the Bishop Warehouse Company Building on Greenwich Street.  The New York Times reported that it "tied up traffic and darkened the financial district with heavy clouds of black smoke, causing a million dollar loss."

Investigators soon determined that it was deliberately set "to conceal the theft of a huge quantities of drugs and liquors."  Federal agents tracked the gangsters to No. 186 Prince Street.  Twenty-eight year old Alexander Psaki and 30-year old John Courmalis were arrested and held on $50,000 bail each.

Assistant U. S. District Attorney Carl E. Newton maintained "the men had been members of a gang which had taken goods from the warehouse which would probably amount to a million dollars."  This, he said, was just the last in a long string of "systematic thefts."

The one constant in New York City neighborhoods is change.  In the second half of the century the Little Italy neighborhood took on the influence of the now-trendy Soho district.

Writing in The New York Times on February 11, 1965 Philip H. Dougherty reported on the city's discotheques, of which there were currently 15.  "A proper discotheque, as it was introduced in France," he explained, is a dark, intimate boite de nuit where the music is supplied by hi-fi stereophonic sound systems tended by a disk jockey.

And residents of No. 186 Prince Street had come up with a clever way to capitalize on the craze.  Dougherty described Killer Joe Piro as "by appointment, dancing master to the jet set."  He partnered with disk jockey, Slim Hyatt, "a tall, 35-year-old, thin-faced and soft-spoken Panamanian" and a group called the Porpoise--all living in the Prince Street building--to turn any "home club or hotel into a discotheque."

Dougherty referred to their partnership as "discotheque-to-take-out."  For $50 an hour they would supply the turntables, speakers, and records.  By the time of the article the Williams Club had used the group's services three times.  Its manager said "The people just didn't want to go home."

The Soho-like atmosphere seemed assured when the Prince Street Gallery opened in October 1974.  But it eventually moved on.  The ground floor space where John Hashagen sold groceries, J. Kroeger ran his saloon, and contemporary art was sold is now a corner newsstand where neighbor can purchase their Lotto tickets. 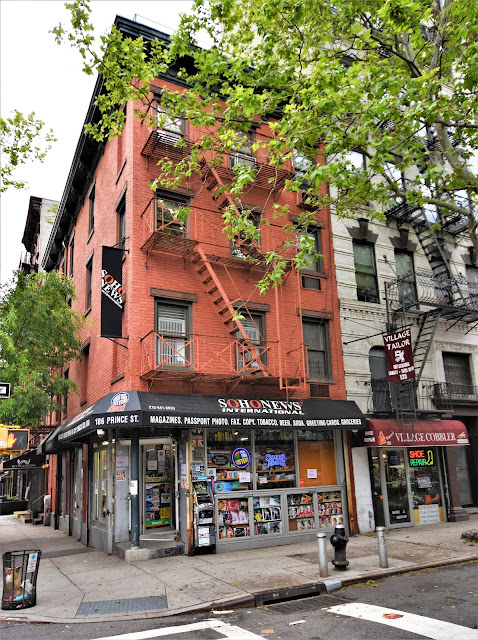 Hashagen's 1850s storefront was long ago obliterated; but the upper floors are little changed since his last alteration in 1869.