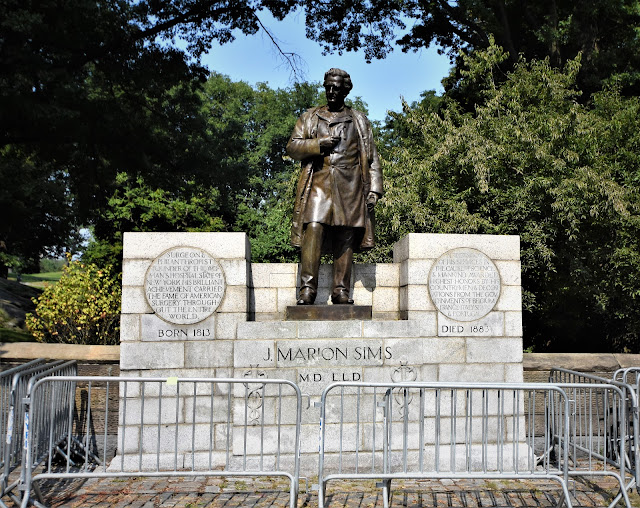 Born in Lancaster County, South Carolina on January 25, 1813, J. Marion Sims spent a year at the Charleston Medical School at the age of 20.  He left "seeking a better institution," and entered the Jefferson Medical College in Philadelphia.  Although he was a leader in his 1835 class, his initial medical practice was essentially a failure.

On December 13, 1840 he and his wife, the former Theresa Jones, moved to Montgomery, Alabama.   In the surrounding area were plantations which, on the whole, had nothing in common with the columned ante bellum estates we envision today.  Many of these farmers lived in double log cabins.

The Cambridge Sentinel would recall in 1939, "At that time the woman who had a child was in more danger than was the average soldier going into battle.  Almost invariably childbirth resulted in certain wounds, the commonest of which was a vesico-vaginal fistula.  It left the woman in a loathsome condition and sentenced her to a lifetime of misery since there was apparently no cure for it."

Although slaves generally were not offered professional medical attention, Sims's neighbors sought his help.  He built what he later described as "a little hospital of eight beds...for taking care of my negro patients."

In June 1845 he was called to the Wescott farm where he found "a young colored woman, about seventeen years of age, well developed, who had been in labor for seventy-two hours."   Sims delivered the baby, but five days later was called back.  The mother, named Anarcha, was in serious condition.  She had a vesico-vaginal fistula.


Sims had never seen such a case and diagnosed it only after reading through his medical books that night.  While she did not die, he cautioned Wescott the following day "Anarcha has an affection that unfits her for the duties required of a servant.  She will not die, but will never get well, and all you have to do is take good care of her so long as she lives."

Within a month he was given two similar cases, and in July Tom Zimmerman of Macon County came to Sims.  "He began immediately by saying that his negro girl, Lucy, about eighteen years old, had given birth to a child two month ago, and that since that time she had been unable to hold any water."  Sims gave Zimmerman the unwelcome news that the case was incurable.  But Zimmerman was undaunted and put Lucy on a train to see the doctor a few days later.

In an address to the Medical Society of the County of New York on January 28, 1884, Dr. W. Gill Wylie said "He gave the patient a bed in his little hospital in his back yard, which he used for his negro surgical cases, and, of course, continued to read and think about the subject."

Sims operated on the women, accepting new cases as they arrived, and designed new surgical instruments for the procedure.   In his 1885 autobiography, The Story of My Life, Sims mentioned Lucy.  "That was before the days of anaesthetics, and the poor  girl, on her knees, bore the operation with great heroism and bravery."

Finally in the spring of 1849 he used silver wire as sutures and successfully cured the first vesico-vaginal fistula.  Within the next two weeks he cured two more cases.  In 1885 Dr. W. W. Johnston asked "Who can tell how many more years the progress of the art might have been delayed, if the humble negro servitors had not brought their willing sufferings and patient endurance to aid in the furthering of Sims's purpose."

In 1853 Sims moved his family to New York City where he hoped to establish a hospital to treat women patients.  An announcement in The New York Herald on May 18, 1854 noted he would speak at a "Lecture on the necessity of organizing a great hospital in this city for the diseases peculiar to females."

Sims faced an uphill battle.  Although respected physicians like Valentine Mott endorsed his cause, wealthy donors "of the sterner sex," as described by The New York Times, balked.  Sims wrote "I was called a quack and a humbug, and the hospital was pronounced a fraud."

But the millionaires' wives rallied behind The Woman's Hospital, as did The New York Times.  Pointing out on February 7, 1855 that there was no such facility in the nation, the newspaper stressed "There are hundreds in our midst, of poor women, who, for the lack of a few weeks' skillful surgical treatment, are day by day sinking into incurable state of disease...For the sake of science, such an institution is demanded here.  This class of diseases is little known, for it is little studied, and hence comes a great amount of suffering which ought to be avoided."

The first American hospital dedicated to women was opened in New York later that same year.

Sims was invited to Europe where he operated in hospitals in Paris, Brussels, London and Dublin.  The French Government conferred the order of Chevalier of the Legion of Honor upon him, and he was given honors by the King of Belgium and decorated by the Italian, Spanish and Portuguese Governments.

The family was in Prussia in 1870 when the Franco-Prussian War broke out.  The New York Times reported "Dr. Sims was induced to take charge of the Anglo-American Ambulance Corps as surgeon-in-chief.  This was the first ambulance corps to arrive at Sedan, where it rendered services of incalculable value, and the fame of Dr. Sims was greatly enhanced by the heroism, energy and remarkable skill displayed by him."

In 1875 he was elected the president of the American Medical Association, deemed by The Times as "the highest honor that any medical man can achieve in the United States."

On March 18, 1881 the Charleston News reported that Sims had been in St. Augustine, Florida due to ill health for several months.  The article noted he "is able to walk about his room.  He hopes to be so far recovered within another month as to return to Charleston."

His health never truly rebounded and he died in his Madison Avenue house on November 13, 1883 at the age of 69.  Within two months a monument committee had been established by The Medical Record.   By April 1887 about $7,500 had been raised and 10 models among those submitted were being considered.  The committee asked three esteemed sculptors--John Quincy Adams Ward, Augustus St. Gaudens, and Launt Thompson--to give their advice.

In the end the committee chose Ferdinand von Muller--known popularly as "Muller of Munich."  The unveiling took place in Bryant Park on October 20, 1894.  Muller's bronze statue sat upon a $5,000 granite pedestal.  It was the first statue to a physician in the United States.

Harper's Weekly, in reporting on the unveiling, pointed out the gratitude of the general public to Sims and his overwhelming popularity.  No donation of more than $1 had been accepted by the committee in amassing the thousands of dollars necessary to erect the monument.  Noting that one physician deemed Sims "the father of American gynecology," the article said "To few other men does womankind owe so large a debt of gratitude as to J. Marion Sims."

In 1934 the city considered moving the Sims monument.  D. Bryson Delavan offered his opinion in a letter to the editor of The New York Times on February 17.  Calling Sims "the savior of many lives and of untold suffering among all classes of women," he suggested placing the statue at the 110th Street corner of Central Park on Fifth Avenue.

Instead the city chose the site along the Central Park wall at 103rd Street, facing the Museum of the City of New York.  When it was unveiled on October 20, 1934 it no longer had its granite pedestal, but sat on a a tripartite marble wall.  During the ceremonies Dr. Bernard Sachs, president of the New York Academy of Medicine said "no one did more than did Dr. Sims in the second half of the last century to give American surgery its present authoritative position among the nations of the world."

Then, in the first years of the 21st century groups began questioning Sims's early work.  Filtering early 19th century history through 21st century lenses, they attacked his ethics, accusing him of manipulating "unconsenting" slaves.  Furthermore, they depicted him as a sort of 1840s Dr. Josef Mengele because of the absence of anesthesia.  The critics either could not grasp, or perhaps willfully ignored, the fact that anesthesia was both scarcely available and considered dangerous in its infancy.  Even the operating rooms of Berlin, London, Paris or New York rarely used the controversial substance.

In his 2006 abstract printed in the Journal of Medical Ethics, L. L. Wall defended Sims saying the critics ignored the enormous suffering experienced by fistula victims and "consistently misrepresented the historical record."  He stressed that while enslaved African American women were indeed a "vulnerable population," the "evidence suggests that Sims's original patients were willing participants in his surgical attempts to cure their affliction--a condition for which no other viable therapy existed at that time."

Following the tragic and fatal demonstrations in Charlottesville, Virginia in August 2017, an understandable push to remove Confederate monuments gained momentum.  But it briskly took on a sort of hysteria.  Its most radical proponents combed historic records for any evidence in their search for enemies.  Dr. J. Marion Sims was quickly a target.

Inventing facts of her own, one protestor speaking before the statue on August 21, 2017 called Sims an imperialist slaveholder, murderer and torturer. 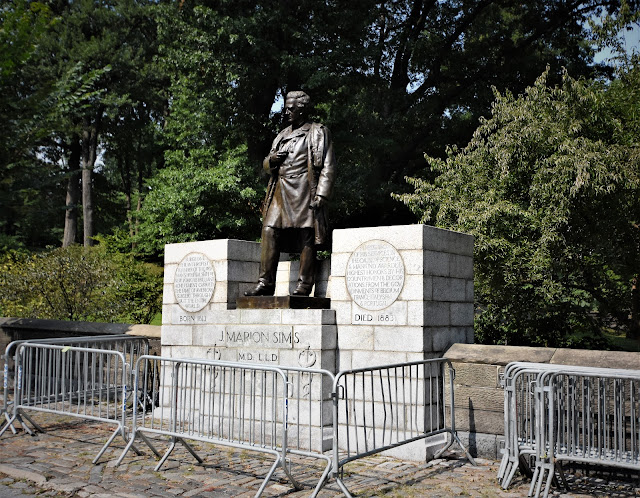 The future of the statue and the reputation of the physician honored throughout Europe and responsible for saving the lives of countless American women are in question.