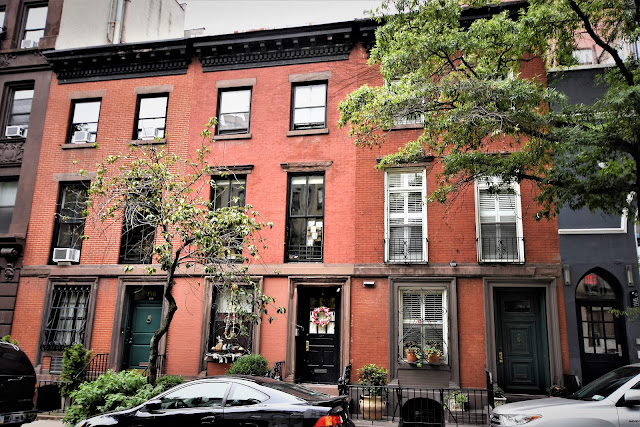 In 1859 Joseph D. Stantial completed construction of three 16-foot wide, brick-faced homes on East 82nd Street between Lexington and Third Avenues.  The highly unusual homes were accessed nearly at sidewalk level--foregoing the tall stone stoops seen on the majority of Manhattan's townhouses at the time.  The first floor openings sat within stone architrave frames.  A brownstone bandcourse ran unbroken through the three homes, separating the ground floors from the second.

The upper floors were trimmed in brownstone as well.  Molded lintels graced the floor-to-ceiling windows of the second floor and the notably smaller openings of the third.  Individual cast metal cornices completed the design.

Stantial retained ownership of all three homes, leasing them to financially comfortable families.  Finally, in April 1872, he sold No. 152 to Dr. Tobias S. Ring and his wife, Mary.  The couple paid $8,500 for the house, about $172,000 today.  He, perhaps, had trouble selling the other two homes; for when he sold them the following year in May the price had dropped to $8,000.

Shipper George Blauvelt had been leasing No. 152.  The new owners had been residents of the Yorkville neighborhood for years.  Dr. Ring studied medicine under the physician Dr. M. Freligh in the 1840s, when homeopathy was just appearing in America.    The alternative medical treatment system was controversial.  In response to a Dutchess County Medical Society investigation in 1865, Dr. Freligh mentioned "Dr. Ring is in full practice in Yorkville and continues an unswerving homoeopath."

In the meantime, Martin McIntosh had purchased No. 154 from Statial.  Previously it had been rented to Montgomery Kellogg, the Chief Engineer in the New York Department of Public Parks.  It was Kellogg who for decades worked closely with Calvert Vaux on the plans for Central Park.

Statial's tenant in No. 156 had been Dr. Hugh Williamson.  His leaving coincided with a dark period in his two-pronged career.   He both practiced medicine and was an educator.  In 1872 not only was he the principal of Grammar School No 53; but he was appointed Professor of Latin for the night classes at Ewing High School, for which he earned $6 a night.

But Williamson's respectability was tarnished after he went on a medical call in January 1873.  When his patient's husband came home, trouble ensued.  The New York Times explained "He got into an unfortunate difficulty with a jealous piano-maker whose wife he had been attending.  The affair resulted in the shooting of the Doctor by the irate husband."  Not only did Williamson resign his position in the school system, he left the 82nd Street house around the same time.

Statial sold No. 156 to Samuel T. Lappin.  His wife, Harriet, had died two years earlier in their home on West 20th Street.   Born in Montreal in 1831, he had six children.

Nothing truly out of the ordinary would take place for the occupants of the three houses until 1933.

That year both 156 and 154 were home to upscale families.  Charles A. Lindley had purchased No. 156 in 1920.  He was a partner in the brokerage firm of Harris, Upham & Co.  His wife was the former Marion Du Bois Floyd and their social standing was evidenced in the guest list at their 1885 wedding.  Among those in St. George's Church that afternoon were Mr. and Mrs. J. P. Morgan, Mr. and Mrs. Cyrus Field, and the Clarence G. Mitchells.

The Lindleys summered at the fashionable Lakewood, New Jersey resort and their names routinely appeared in the society columns as Marion served as patroness for various benefit balls and other events.  As had been the case with his parents, when the engagement of  F. Vinton Lindley and Grace Bigelow Cook was announced in November 1932, it received wide-spread press attention.


When Francis married, he and his bride moved into the 82nd Street house.  Like her next door neighbor, she was actively involved in social events.  In 1931, for instance, she was a patroness of the bridge and tea for the American Women's Association, hosted by the alumnae of St. Lawrence Academy.

Political and social upheaval in Europe was about to bring the Lindleys and the Goggins a starkly different--and perhaps unwelcome--new neighbor.

In May 1933 Rudolf Hess, the Nazi Deputy Fuhrer, gave German immigrant Heinz Spanknobel authority to form an American Nazi organization.  The Friends of New Germany was formed in July 1933 with help of the German consul and the group established its headquarters at No. 152 East 82nd Street.

From here the Nazi group espoused ideologies chillingly similar to ideas being promoted by right wing groups today: disparagement and rejection of the free press, and attacks on the left, for instance.  When press accounts were unflattering, the group denounced them as false.  Uniformed members stormed the offices of the German-language newspaper the New Yorker Staats-Zeitung and demanded that pro-Nazi articles be published.

(Those uniforms included white shirts and black trousers for the men; and white blouses and black skirts for the women.  Their hats were emblazoned with a red Nazi symbol.)

Propaganda flowed from No. 152 East 82nd Street.  It did not go unnoticed by the Federal and local governments.

In October 1933 Spanknobel was deported to Germany for having failed to register as a foreign agent.  On October 28 the State Attorney General announced he was launching an investigation into the activities of the League of the Friends of New Germany.  And Mayor John P. O'Brien incurred the wrath of the group when he banned the German Day celebrations scheduled for that month.

Fritz Gissibi, head of the Nazi organization in Chicago told the Chicago Tribune "the action of Mayor O'Brien constituted an act of war on the Nazis in America."  O'Brien responded in kind, issuing a press release on October 28 that said in part "I accept the challenge.  No man or set or men seeking to set up a state of terrorism can frighten or coerce the Mayor of New York.  There will be no gang rule while I am Mayor."

The Lindley and the Goggin families no doubt heaved collective sighs of relief when, in December 1935, Rudolph Hess recalled the leaders of the the Friends of New Germany to Germany and effectively disbanded the organization.

The East 82nd Street block returned to normalcy.   No. 152 received another socially visible family.   Somewhat ironically given the home's former occupants, Dr. Alexander Victor Lyman was a World War I hero.  He had served as a lieutenant in the Army Air Force having left Princeton in 1916 before the United States entered the war in order to serve his country.  He was now an instructor in children's diseases at Columbia University.

The Lyman family included the doctor's second wife, Elizabeth; her daughter from a previous marriage, Patricia; and Sally, Alexander, Victor and John Maynard Lyman.  Like the other two houses in the group, No. 152 returned to upscale social entertaining.

Sally was educated at Miss Hewitt's School and went on to Sarah Lawrence College and then Vassar.  She was a freshman at Sarah Lawrence in 1947 when her coming out was celebrated.  On December 26 the Lymans hosted a supper dance in the Pierre Hotel to introduce her to society. 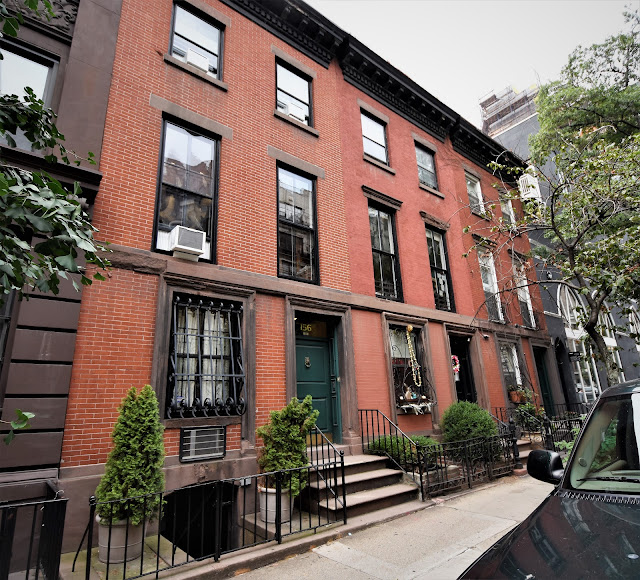 The three venerable brick houses all survive as single-family homes.  Their weather-abused brownstone lintels have been shaved flat at No. 156; but otherwise the homes are little changed on the outside.  And no one passing by could imagine that one of them was a center of hate and bigotry during one of the world's darkest periods.