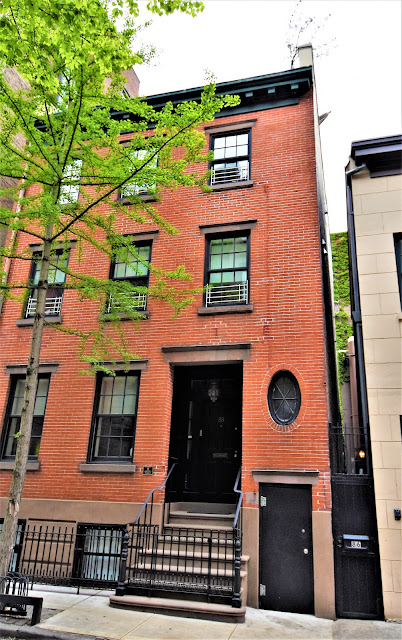 Following his death in 1889, The New York Times said of James Phalen "He was the first man who made it a business to buy lots and sell them to builders, taking part payment and a lien on the property for the remainder."  The erudite real estate operator was president of the Academy of Music.  The Times added that he "had a taste for books and the fine arts, and gathered many things of great value.  Among these are five early editions of Shakespeare's plays, dated respectively 1600, 1607, 1619, 1634 and 1655; Guido's Cleopatra, and a marble bust of Lamartine by Count d'Orsay."

In 1850 the block of Bedford Street between Grove and Barrow Streets was lined with three-story wooden and brick-faced houses built in the 1820s.  Among the many real estate deals that garnered Phalen his fortune involved the old house of S. A. Cunningham, at No. 88 Bedford Street.   Phalen demolished the building and began construction on up-to-date brick faced residence.

Completed in 1851, the Greek Revival house was three stories tall above a rusticated brownstone basement.  Beside the Cunningham house had been a horsewalk, or narrow passageway to the rear.  The architect retained the necessary passage, but extended the building above it, bringing the interior floorspace to its full 25-foot width.

The design was restrained, ornamented only by prim corniced lintels, a handsome doorway with sidelights and transom, modest bracketed cornice and an attractive oval opening over the horsewalk door.


Phalen's involvement in the property seems to have ended soon after its completion.  But an interesting footnote to the story occurred after his death.  His two daughters had married well, both becoming French countesses.  His son, Charles, however, enjoyed his carefree bachelor life.  When Phalen's will was read, it was discovered that Charles had been cut out, on the grounds of "profligate and reckless habits."  A subsequent law suit to overturn the will dragged on for months.

The family who owned No. 88 Bedford Street either found itself with spare bedrooms in 1872, or the economic difficulties that would soon erupt in the Financial Panic of 1873 (equivalent to the Great Depression of the 20th century) prompted a need for additional income.  For whatever reason, an advertisement appeared in The New York Herald on October 13 offering "To Let--Two nicely furnished rooms to gentlemen only; terms moderate, reference required."  (The caveat "gentlemen only" ensured that no immoral women would tarnish the respectability of the house.)

The hard economic times were evidenced in advertisements placed by boarders.  Despite his long career, "J.M." was unemployed in December 1872.  "A situation wanted--as steward or manager in hotel, club or restaurant; has 15 years' experience and good references."

And in January 1874 The New York Herald ran the ad "A clear soprano desires a position in a quartet choir (Episcopal preferred); salary moderate."

The owners made it clear in their ads that this was not a boarding house.  "A private family will let a neatly furnished room, with fire; terms, $10 per month," it announced on September 26, 1875; and similarly, "An American family will let a large front Room, nicely furnished, stove &c." in 1879.

While still a single-family home, its future seemed doomed in 1899.  A year earlier developers Leister & Dohrenwend had purchased the three old houses abutting No. 88 Bedford--Nos. 90 and 92 Bedford and No. 20 Grove Street--and begun construction of a six-story apartment building.

As that structure neared completion, Leister & Dohrenwend purchased No. 88 Bedford and hired Schneider & Herter to design a $23,000, six-story apartment.  The architects were the same who had designed the new building next door; so the new project was most likely intended to be an extension.

But something happened and the plans, already filed, never came to pass.  Finally, in March 1901 Otto A. Leister sold his half-interest in the property to Gustav J. Dohrenwend.    He continued to lease the house.

Peter J. Welsh and his family lived here around the time of the transfer.  A wholesale fruit dealer at No. 206 Greenwich Street, he maintained a country home at East Rockaway.   The Civil War veteran and his wife had six children.    He died at the Long Island house in 1906 at the age of 64.  The New York Times noted on July 28, "His funeral will be held from his city home, 88 Bedford Street, to-morrow at 1 o'clock."

Following the Welsh family, Dohrenwend leased the house to George C. Blickensderfer and his wife, Nellie Irene.   Inventor and president of the Blickensderfer Typewriter Company, he had started out his career as a dry goods salesman with a public school education.

His astounding adaptation of the typewriter, however, made him a fortune.  The Times later explained "Mr. Blickensderfer adapted the typewriter he invented to the Chinese alphabet, an accomplishment which so interested the Japanese Government that it revised its written language to adapt it to a typewriter keyboard."

The couple maintained a country estate in Sound Beach, Connecticut, near Stamford.  It was there, on June 9, 1915, that Nellie Irene died.  As had been the case with Peter Welsh, her body was brought back to Bedford Street for the funeral.

With the outbreak of World War I the Government sought Blickensderfer's mechanical expertise.  He focused all his energies on developing "belt loading devices by which cartridges are automatically loaded into machine guns" and to improved machine gun mounts.  But the pressure was apparently too much for the 67-year old, who died on August 15, 1917.

By the Great Depression there were four apartments in the house.  The residents over the years drew little attention other than commonplace announcements--Leonard and Frieda Stimmel had a baby girl, Ilene Hope, on June 13, 1935; and Benjamin Field passed the State Bar exam in 1954, for instance.

Eugene F. Suter, Jr., however, stood out.  When he was five years old, in 1938, his parents divorced.  Suter's father was an inventor and machinery manufacturer.  When he died in 1943 he left an estate of around $1 million--more in the neighborhood of $9.8 million today.  A trust fund for young Eugene paid for his "maintenance" until he was 21 years old; then he would receive the accumulated income at the ages of 25, 35 and 40.

He donated it to the American Friends Service Committee, the Socialist Party, the U.S. Grant School for Negroes, and the rest to his mother.  He then informed the trustees of the fund that he wanted to relinquish further payments for "moral and political reasons."  He said he had "two hands and a head of my own."

If newspaper readers considered Eugene Suter insane for turning down a fortune, so did his half-brother.  George Bingham filed a petition in 1957 to have his Eugene deemed incompetent.  "Mr. Bingham, in his petition, said that for some time Mr. Suter had been incompetent to manage his property and was of unsound mind and mentally incapable of governing his affairs," reported The Times.


It was home to photographer Paul Costello and his wife, former Domino magazine style director Sara Ruffin until 2010 when they sold it for $9.6 million.   While the renovations transformed the interiors to a modern, upscale home; the architects sympathetically preserved much of the surviving period detailing.  From the outside, little has changed since the home's completion more than a decade before the Civil War.