In the 1870s Richard W. Buckley was deemed by the Real Estate Record & Builders' Guide a "rising young architect."  For a few years he and Robert McCafferty worked together to design rows of brownstone homes aimed at middle-class buyers.  In 1880 they formalized the partnership by establishing the office of McCafferty & Buckley.

Before long the pair would target a more moneyed customer base.  Acting as both architect and developer, the firm designed opulent speculative residences along the blocks off Central Park.  Years later The New York Times would say "McCafferty & Buckley produced many of the handsomest private dwellings on the east side of the city."

In 1900 McCafferty & Buckley began construction on five abutting mansions at Nos. 18 through 26 East 82nd Street.  Although the corner house presented a restrained gray brick appearance, the others were more ebullient.  Their Beaux Arts designs were similar enough to create a congruous group, yet each was distinctly different, avoiding the sameness of rowhouses of a generation earlier.

Nos. 24 was a commodious 27-feet wide.  Completed in 1902, the houses not only presented the French-inspired style so popular with the upper classes, they offered the last-word in domestic conveniences.  Like its neighbors, No. 24 boasted "Otis electric passenger elevator, automatic intercommunicating telephones, automatic heat regulating device, patent hot air clothes dryers [and] adequate hot water supply independent of kitchen boiler."

An advertisement placed by McCafferty & Buckley on September 21, 1902 called it "perfectly planned and replete with the latest innovations" and stressed that it was carefully designed so "that every room is flooded with sunlight."

Surprisingly, certainly to McCafferty & Buckley, the houses did not sell.  No. 22, for instance, sat empty until 1908.  In the meantime they were maintained--kept heated in the winter and ventilated in the summer, for instance, to prevent mold or other damage.

The partners no doubt breathed a sigh of relief when No. 24 was purchased by John L. Crawford and his wife, the former Eugenia Jeannette Buffenberger Colburn, in June 1905 for "about $200,000."  The price would equal about $5.63 million today.

Like Andrew Carnegie and Henry Frick, Crawford was a Pennsylvania steel magnate.  Now nominally retired, he moved his family (the couple had six children) from Pittsburgh to New York.  He was, as well, a director in the New Castle and Beaver Valley Railroad Company.  Eugenia was wealthy in her own right, having inherited half of her mother''s substantial estate in 1894.

Despite their substantial wealth, the Crawfords' social life seems to have been rather subdued.  Society columns did not announce dinners or dances in the 82nd Street mansion.  Perhaps the first mention of the Crawford name appeared in February 1908 when daughter Ninette married Louis A. Greenley in the Church of the Incarnation.  Her sister, Edna, served as maid of honor and John Crawford, Jr. was best man.   The unfamiliarity of the family among New York society was, perhaps, why the groom got first billing in the event's press coverage.

Three months later Ninette, along with sister Hazel, were bridesmaids at Edna's marriage to Charles H. Johnson in the Hotel Manhattan.

John Crawford died in 1921.  Three years later the mansion was combined internally with the Henry Siegel mansion at No. 26.  There were now four apartments each on the second through fifth floors, with a new penthouse of two rooms as part of a fifth floor duplex.

On July 25, 1929 the antiques and interior decorating firm Lenygon & Morant purchased the properties, prompting The New York Times to report it "now owns a plot fronting 102.2 feet on Madison Avenue by 62 feet on Eighty-second."  For 16 years the firm's galleries had been located at No. 16 East 16th Street.  Now, as Madison Avenue morphed into a high-end shopping thoroughfare, it planned a move uptown.   The firm announced "The two houses will be remodeled into art galleries, showrooms and studios to be entirely occupied by Lenygon & Morant."

Francis Henry Lenygon was an English-born cabinetmaker who studied at the South Kensington Museum in London.   While in Britain he had become well-known as a cabinet maker to England's aristocracy.   In 1912 he merged with Morant & Co. to create Lenygon & Morant.  The respected firm held royal warrants under four successive kings.

In 1910 Lenygon had traveled to the U.S. to supervise the interior decoration of the the mansion of Whitlaw Reid.   His firm soon opened a New York City branch, furnishing America's millionaires with hand-made reproduction furniture.  At the same time that Lenygon & Morant purchased Nos. 24 and 26 East 82nd Street, the firm was acting as the major consultant to Nelson Rockefeller in the reconstruction of Colonial Williamsburg.

Within months Lenygon & Morant commissioned architect Julius Eckmann to renovate the interiors.   While the corner mansion retained a dignified presence, it received a sidewalk level storefront.  Eckmann preserved the exterior of No. 24, on the other hand, so it appeared to still be a private residence.

Eckmann's plans called for "stores" on the first floor, with the upper stories reserved for "interior decoration [and] furniture display."   The sophisticated and wealthy nature of Lenygon & Morant's patrons was reflected in the gallery's interiors.  Complete period rooms were installed, including an 18th century room by esteemed British architect Colen Campbell.

On October 24, only three months after Lenygon & Morant purchased No. 24, the Stock Market crashed, triggering the Great Depression.   The subsequent slowing of the purchase of costly art and furnishings even among the nation's wealthiest citizens may have prompted the firm to sell the property in 1935.  The mansions were converted that same year to upscale apartments, including separate maids' rooms and a duplex on the upper two floors.

Among the first tenants were Leonard A. Busby and his wife.  Their daughter, Janet, had recently married Phillip Marsden Walsh.  When that couple's first child, named Marsden, was born on September 11, 1937, the story appeared as far away as Chicago.  The Chicago Tribune reported that the baby was at the Busby's 82nd Street apartment.

Two other early tenants were Count Nikolai von Keller and his new bride, the former Rose Hope Nelson.  The couple was married on March 21, 1936 in Englewood, New Jersey's St. Paul's Episcopal Church.  It was apparently an impressive ceremony.

Rose Nelson's great-granddaughter was Chief Justice John Marshall and she was a descendant of Governor Thomas Nelson of Virginia.  Her grandfather, Brigadier General Alexander G. Taliaferro was a commander in the Confederate Army.  But it was the groom whose pedigree drew attention.

Von Keller was the son of the Russian Princess Cyril Toumansky and the late Major General Count Arthur von Keller, who was killed in World War I.  His mother then married Imperial Guard Captain Toumansky, Prince Zabarajsky.  An ancestor of von Keller was Count Drotheus Ludwig, who was the Prussian Ambassador to the Court of Catherine the Great and who married Serene Princess Vitgenstein.

The New York Times reported that "Many members of the former Russian nobility now living in this country were present at the ceremony."  On her wedding dress Rose wore a jeweled pin which had been presented by the Czar to the groom's mother when she was a young girl.

Following their honeymoon they moved into No. 24 East 82nd Street.

The seeming tradition of newlyweds making their home here continued in 1938.  In January that year the quarterly journal of The Grenfell Association of America announced "Dr. Edward Herbert, formerly of Fall River, is now living at 24 East Eighty-second Street, New York.  He has recently been married."

The apartment of Mr. and Mrs. Henry Parish II was the scene of a socially-important wedding on May 1, 1948.  Millionaire Paul Mellon was married to Rachel Lowe Lambert Lloyd that afternoon.  Mellon was the son of the late Andrew M. Mellon, financier and industrialist, who served as Secretary of the Treasury under Presidents Harding, Coolidge and Hoover, and an Ambassador to Great Britain.

His father's reputation and stature did not, however, overshadow Paul.  He was a former director in the Mellon National Bank, in the Gulf Oil Corporation, the Pittsburgh Coal Company and several other corporations.  He was also a trusted of the National Gallery of Art in Washington (a gift of his father), and of the A. W. Mellon Charitable and Educational Trust.

Another socially visible couple who lived here at mid century was Evans Rogers Dick and his wife, the former Joan Tuckerman.  Interestingly, she preferred to be referred to as "Mrs. Tuckerman Dick."  Their daughter, Joan Cotton Dick, enjoyed the privileges of wealth.  She was educated in private schools in Boston and later Sarah Lawrence College.

With the United States' entry into World War II, however, she served overseas with the Office of War Information.  In 1948 she was the secretary of United States Senator Hubert H. Humphrey (later 38th Vice President of the United States).  On December 14, 1950 her parents announced her engagement to William Stanwood Pier, her mother steadfastly using her maiden name: "Mrs. Tuckerman Dick of 24 East Eighty-second Street and Evans Rogers Dick have announced the engagement and approaching marriage of their daughter."

In 1971 the former mansion once again was home to a business.  Donald Bruce White Caterers, described by New York Magazine as "well known in New York and Southampton for his prepared send-out meals," opened here.  White's take-out meals were not delivered in plastic bags by bicycle.

Instead he catered "buffet dinner parties."  The magazine described a delivery for a roof-garden picnic on November 8, 1971.  "Each guest would get a painted, red mushroom basket containing the meal.  Done up with red and white checkered cloths, the baskets were attractive."  They contained delicacies like pate, chicken Kiev, rice and cucumber salad.

Among the residents upstairs at the time was retired stockbroker Norman C. Lee and his wife Norma Parro.  In 1939 he had made headlines as the first regular passenger to fly around the world using scheduled commercial airplane service.


It took Lee 20 days and 15 hours to circumnavigate the globe, costing him $2,100.  He told reporters "One of the most interesting points of the trip was eating one day's three meals on three different continents.  I had breakfast at Basrah on the Persian Gulf in Asia; luncheon at Alexandria, in Africa, and inner in the European city of Athens."

He was still living in his apartment here when he died in November 1973 at the age of 77.


In the mid-1970s the Barry Friedman Gallery of fine and decorative art was in the building.

In 2007 motion picture actress Renee Zellweger purchased an apartment in the building.  The following year, when the parlor floor apartment was offered in foreclosure, she purchased that.  Before long she spent a reported $8.2 million to combine three apartments into one lavish apartment.  She sold it in the spring of 2011 to 2011 to actress Leelee Sobieski. 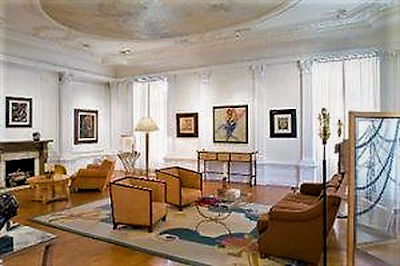 While there is still a discreet commercial space on the ground floor, there is no obvious evidence from outside.  The handsome Beaux Arts structure looks little different that it did in 1903 when its builders and architects had a difficult time finding a buyer.