On the night of April 14, 1865 Secretary of State William H. Seward lay sick, unaware that the President had been shot in Ford’s Theatre about an hour earlier.  A man knocked on the door of the house, saying he had a prescription for Seward, and was shown to the sick room.  The following morning Major General Dix reported “The assassin immediately rushed to the bed, and inflicted two or three stabs on the throat and two on the face. It is hoped the wounds may not be mortal.  My apprehension is that they will prove fatal.”

William Seward survived to the great relief of American citizens.  But within a few years his once-sterling reputation would be tarnished.

Seward had appeared on the political stage in New York when he was elected in 1830 to the State Senate.  A staunch Abolitionist and accomplished orator, he became Governor in 1838, serving two terms.  In 1849 he was elected United States Senator.  His anti-slavery speeches and increasingly important status within the Republican party earned him a majority of the party’s votes for the presidential nomination.  Nevertheless, it was Abraham Lincoln who ran.

Seward’s persuasive powers and solid Abolitionist stance did not go unnoticed by Lincoln and in 1861 he was appointed Head of the American Cabinet—or Secretary of State.  The bloody War of Rebellion had begun and Seward had much work ahead of him.

On July 11, 1862 the Secretary of State decline an invitation from a committee in New York City to attend a “Mass Meeting of all parties who are in favor of supporting the Government in the prosecution of the war and suppressing the rebellion” in Union Square Park. In sending his regrets and stressing his support, he pointed out that he had sent his only unmarried son into public service as a private in the army.

William Seward’s valuable contributions went far beyond his son’s military service.  He lobbied foreign countries to bar recognition of the Confederacy and negotiated the anti-slave trade treaty with Great Britain.  But now, with the war ended and Lincoln dead, new issues would begin to change public opinion of Seward.

He was in support of President Andrew Johnson’s policies regarding the South—including amnesty and pardon.  Johnson returned all property to the former Confederates who pledged loyalty to the Union.  As a result, very few Confederate leaders were prosecuted (by 1866, 7,000 Presidential pardons had been given out), and rich plantation owners regained their wealth and power.
Northerners were outraged and Seward suffered severe condemnation from members of his own party.  Then, in 1867, he brokered the purchase of the Alaskan Territory from Russia.  Across the country journalists and citizens were puzzled and derisive of the purchase of this remote, frozen region; famously deeming it “Seward’s Folly.”

William Henry Seward retired from politics and public life and died in Auburn, New York, on October 10, 1872.  Almost immediately a small group of distinguished New Yorkers formed a committee to erect a monument to the statesman.  To design the sculpture they turned to Randolph Rogers in 1873.  Rogers was responsible for the great bronze doors of the East Front of the United States Capitol building and had recently completed four major Civil War monuments—the Soldiers’ National Monument at Gettysburg; the Rhode Island Solders’ and Sailors’ Monument, in Providence; and the Michigan Soldiers’ and Sailors’ Monument in Detroit.

Subscriptions to pay for the $25,000 statue were obtained from eminent citizens including General Ulysses S. Grant and Cornelius Vanderbilt.  Three years later, in July 1876 the statue arrived in New York from Munich where it had been cast.  On August 19 it was raised on its pedestal in Madison Square.

The base of the 15-foot high pedestal was constructed of a single block of New England granite.  “The rest is composed of dark Italian marble,” reported The New York Times, “the contrast between the two being very marked.”  Although the unveiling would be over a month away, the newspaper gave readers an premature description.

“The monument represents Mr. Seward in a sitting posture, and apparently in a thoughtful mood.  His right hand had fallen to his side, and in it he holds a pen with which he was been writing or is about to write a document that is held in the left hand, which rests on his knee.  The right leg is thrown over the left, and he is turned in the chair upon which he sits slightly toward the left.  A cloak is thrown loosely over his shoulders and the back of the chair, which very much relieves the ungainliness of the attitude.” 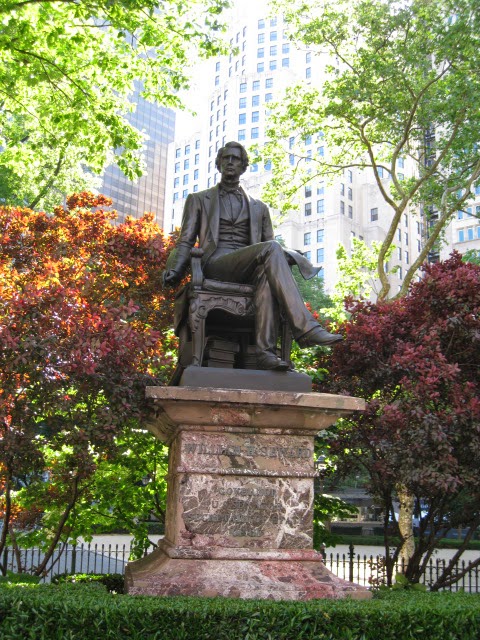 The newspaper had slipped in the mention of “ungainliness” then moved on to say “The likeness is a good one, and does credit to the sculptor.”  However, it would not be the last negative comment on Rogers’ statue.

It was unveiled on September 27, 1876 at the southwest corner of the park.  Gilmore’s band played and, as usual, dignitaries assembled on a flag-draped stand.  The festivities, however, were less than overwhelming and newspapers reported that the ceremonies for the dedication of the Lafayette statue in the same park were more impressive.

By 1899 The New York Times was more candid in its appraisal of the Seward statue.  Including it in an article titled “Unsightly New York Statues,” the newspaper suggested that a “tract of land be selected in some secluded country vale far from the city’s bustle” and “Thither might be taken the seated figure of William H. Seward, which now occupies valuable room in Madison Square.”

Then in 1906 a shocking accusation cast the Seward statue in dubious light.  That Seward’s head was too small for the sculpture’s body had not escaped notice.  Now Josiah C. Pumpelly gave an explanation in his letter to the editor of the New York Times on April 18, 1906.

“In its way it is a most extraordinary imposition, for while the head of the statue is Mr. Seward’s, the body is Abraham Lincoln’s, and the whole statue, it seems to me, should be removed, as being in its absurd make-up only an imposition.”

Pumpelly asserted that the committee had asked Rogers to reduce the price.  “This proposition the sculptor very properly declined to accede to, but did, with much disregard for his own fame and the true fellow craft spirit, offer to make a patchwork of the statue at a lower figure by attaching to the head of Seward a statue of Lincoln—minus the head, of course—which had been left on his hands by a defaulting Western city.”

The writer said that a biographer of Seward “deemed this composite statuesque fraud a disgrace to the sculptor and to the committee with whom he had conspired to produce this imposition, and he thought that the city authorities should have the monstrosity removed and a proper fitting statue of our honored Secretary of State erected in its place.”

The rumor of a too-small head plopped on a pre-existing Abraham Lincoln body bounced around for half a century until Meyer Berger, writing in The Times on March 14, 1955 seemed to close the case.  He cited A. C. M. Azoy of Ardsley-on-Hudson “who has searched the subject [and] said it is true the Secretary of State William H. Seward’s head is superimposed on President Lincoln’s body in the statue in Madison Square Park.”  He went on to say “’The books under Seward’s (Lincoln’s) chair represent the Constitution,’ writes Mr. Azoy, ‘and the paper in Seward’s (the President’s) hand is the Emancipation Proclamation.’”

But Azoy’s research did not put the debate to rest.  Art scholars and conspiracy theorists continue to examine Rogers’ Lincoln portrait statues (most notably the one in Philadelphia that highly resembles the Seward monument) and argue whether or not the disproportionate head and body of Seward belonged originally to two different statesmen.