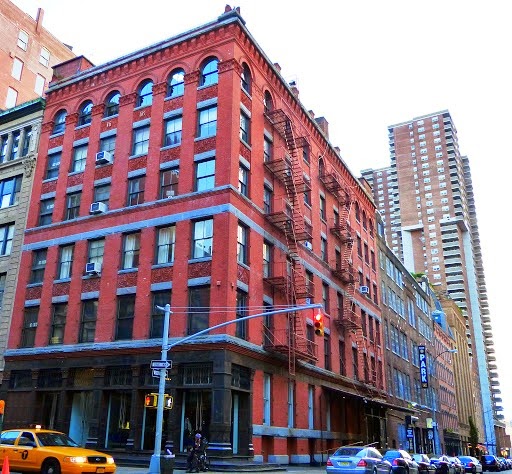 John Castree was three years old when he arrived in New York from Ireland in 1814.  As he grew he worked in the grocery store of his uncle, James Beatty, learning that trade.  He established his own business and by the time he was 25 was wealthy enough to purchase a fine residence in the fashionable St. John’s Park neighborhood.  In 1836 his house at No. 121 Hudson Street sat among other handsome Federal-style mansions that ringed the bucolic park.

But change was to come to St. John’s Park.

By the end of the Civil War the neighborhood had been essentially abandoned to commerce.  Warehouses and freight yards replaced most of the mansions and those that survived were converted for business.  Unlike his neighbors, John Castree stayed on.  Recognizing its real estate potential, not only did he retain ownership of No. 121; he gobbled up surrounding property.

In 1888 he commissioned architect Thomas R. Jackson to design a warehouse building at Nos. 117 and 119 Hudson Street, directly across the street from his former home.  The area had become the center of the provisions district and Jackson’s resulting structure was intended to cater to such firms.  Six stories tall, the sturdy Romanesque Revival structure was six bays wide on Hudson Street and stretched 10 bays to the west along North Moore.  Jackson designed the base with a focus on ventilation to retard damage to perishable foodstuffs.  Wide bays between cast iron piers on Hudson Street could be secured at night or in foul weather by iron shutters.  But when opened, they allowed fresh air and cooling breezes to waft through the interior.

Jackson used blocks of rough cut granite as lintels and band courses to disrupt the heaviness of the red brick mass.  Intricate, swirling foliate panels filled the spandrels below the openings of the third, fifth and sixth floors.  Romanesque burst forth at the upper level with arched openings, terra cotta capitals and a strapping brick-corbeled cornice.  It would be the first of three corner buildings at Hudson and North Moore Streets that the architect would produce for the family.

John Castree died in 1889, just months after the building was completed.  At the time E. C. Hazard & Co, importer and manufacturer of “fancy groceries,” was operating from the nearby 87-91 Hudson Street.  Like Castree, Edward Clarke Hazard was a self-made, wealthy businessman.  Although successful by 1883, his fortunes would soar when that year he set out to produce “a pure article of tomato catsup,” as described in William Nelson’s 1902 The New Jersey Coast in Three Centuries.  He purchased 165 acres of land in Shrewsbury, New Jersey to grow tomatoes; built a factory and laboratory and began production of Shewsbury Tomato Ketchup, “celebrated for its purity and excellence.”

Hazard relocated to No. 117-119 Hudson Street where the firm distributed its catsup, canned tomatoes, baked beans and mushrooms, and imported delicacies.  The building would be the firm’s headquarters for years.

Acutely aware of his lack of formal education, Edward Hazard read voraciously and devised his own advertising campaign based on Shakespearean quotations.  Display cards were posted in the street cars and by printing them in color Hazard ensured they would stand out.

“I rang fifty changes on these condiments in my street-car advertising, each one introduced by a Shakespearean quotation,” he told Art in Advertising in November 1895.  “Though many of them were known to every schoolboy and familiar as household words, yet I flatter myself in the new ‘dressing’ we gave them they lost the chestnutty flavor.”  The Hazard ads consistently stressed the purity of its product—no additives were ever used in its production.

The E. C. Hazard & Company business blossomed and by the turn of the century it was also producing and distributing its own chili-pepper and burnt onion sauces, salad dressings and mayonnaise, various jellies and other condiments under the Shewsbury label.

Following his death on February 2, 1905, American Industries noted “When Mr. Hazard died his business was one of the largest and most prosperous in the country, and it was his boast that his entire success had been due to the fact that he had never used any adulterants, as preservatives or as coloring matter, in any of the foods which he manufactured.

The firm was taken over by Edward’s son, Elmer C. Hazard and three investors.  The business which had grossed as much as $5 million a year under its founder's direction was quickly in trouble.  On August 22, 1907 the New-York Tribune reported on the bankruptcy of E. C. Hazard & Co.  Saying the bankruptcy was based on the company’s inability “to meet claims against it,” the newspaper estimated the number of creditors to be over 200.

Around the same time dyers and colorists were moving in to the building.  In 1911 I. J. R. Muurling was here, as was the German-based firm, Farbenfabriken of the Elbertfeld Company.  Not only was Farbenfabriken a maker of textile dyestuffs; oddly enough it also produced aspirin.  A year later the corporation was absorbed by the Bayer Company, Inc., also a German corporation.  The firm’s name would soon appear in the newspapers, not because of its textile dyes or aspirin; but because of espionage and political scandal.

Hugo Schweitzer worked for Bayer at No. 117 Hudson Street and in August 1915 the New York World exposed a plot by which the chemist was supplying chemicals to the German government for munitions making.   The New-York Tribune on August 17 said Schweitzer “is frankly recognized as the agent of the German government” and was involved in “a clever scheme calculated to insure the supply for German arms of $1,400,000 worth of phenol (carbolic acid) from the factory of Thomas A. Edison.”

Until Schweitzer’s exposure as an agent “in total disregard of this country’s neutrality” he had “always been respected as a chemist of great skill and loyalty,” said The Sun later.  He was later discovered to be involved in the dissemination of pro-German propaganda.  Although he maintained his mansion at No. 410 Riverside Drive, his reputation was forever ruined   On December 20, 1917 with the United States now firmly involved in the war, he fell ill and three days later was dead.  In reporting the death of the 57-year old scientist, The Sun focused, as expected, on his role in the espionage rather than his accomplishments.

Schweitzer’s high-profile involvement with the German government probably played a hand in the Bayer Company’s being taken over by the Alien Property Custodian a month later, in January 1918.  This was followed on August 21 by the arrest of five company officials.  “The men were taken on Presidential warrants and are charged with being dangerous enemy aliens,” reported the New-York Tribune the following day.

Following the war, the Bayer Company edged back into a normal business routine and before long few remembered the wartime turmoil.  By 1921 Bayer, which held a trademark on the word “aspirin,” was better known throughout the country for its pharmaceuticals than for its dyestuffs.  Other dye producers were still in the building, however.  The Grasselli Chemical Co. was a major producer of vat colors for textiles and remained in the building in the 1920s.

Bayer was still producing both dyes and aspirins in January 1927 when burglars broke into the stockroom here.  They made off with aspirin worth $90,000 (over $1 million today).  The New York Times reported “The robbers, it was found, had taken 1,286 cartons of aspirin.  Each carton contained five gross of small tin containers, and was valued at $70.  To have carried away so many cartons, it was said, the robbers must have used two trucks.”

The picky thieves took only aspirin; leaving the dyes and other products behind.  But before they had a chance to liquidate their booty, police closed in.  By February 27, 1927 thirteen men had been arrested and nearly all of the stolen aspirin was recovered.

At mid-century the T. M. Duche & Sons firm, importers of fruits and nuts, was here.  But by the 1960s the Tribeca neighborhood was changing.  Commercial lofts and warehouses were slowly taken over by art galleries and studios as the area became trendier and less industrial.  In 1963 the former loading dock received a facelift with modern glass doors and aluminum frames to accommodate a furniture store.


By 1978 a dance theater, Marleen Pennison & Dancers, had taken over the third floor loft; and in 1991 the ground floor held a health food store.  Nearly a century and a half after its completion, Thomas R. Jackson’s No. 117-119 Hudson Street is little changed.  A striking example of a utilitarian structure that did not sacrifice handsome design for functionality.