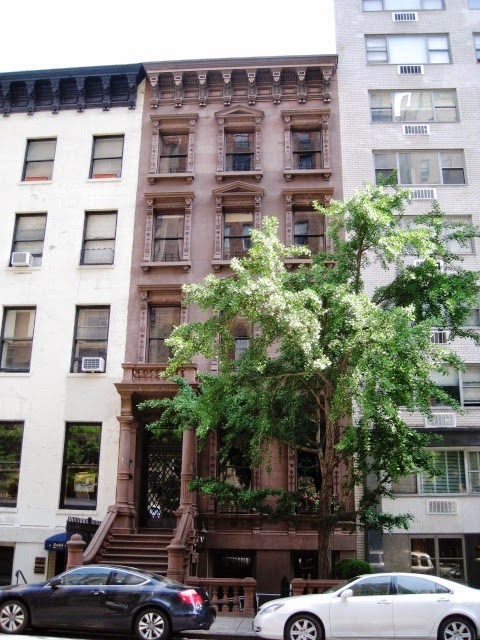 The rapidly developing Upper East Side presented enormous potential for developers in the late 1870s and early 1880s.  Speculators erected long rows of brownstone-fronted dwellings which quickly filled with wealthy merchant-class families.  One such real estate firm was Lynd Brothers.  Robert B. Lynd not only erected his speculative residences, he designed them.

In 1881 Lynd Brothers began construction of a row of nine homes on East 72nd Street, from No. 39 to 55 in the trendy neo-Grec style.  Like its neighbors, No. 41 would rise four stories over a high English basement.  Robert Lynd decorated the window surrounds with incised carvings of whimsical stylized flowers, a nod to the emerging Eastlake movement.  Above the columned entrance portico would be a small balcony with a carved stone balustrade, mimicked in the areaway fencing at street level.  Heavy cast iron railings on either side of the stoop copied the design.

It was purchased in April during a flurry of real estate deals that prompted The New York Times to comment “Seldom has a week produced a more interesting succession of dealings in fine dwellings.”  The purchaser was Bernhard Mayer who, along with his wife Sophie, was active in real estate.  This transaction, however, was not just another property deal.

The Mayers intended No. 16 East 72nd Street to be the home for their growing family.  The couple had four children, Joseph; Albert, aged 2; 4-year old Clara, and daughter Theresa.  Joseph would be the first to leave No. 16.  His wedding to Minnie Emily Gallert was held at Delmonico’s on the evening of April 4, 1911.

As World War I approached, Albert Mayer, who had attended Columbia University, was working on his civil engineering degree at the Massachusetts Institute of Technology.  He graduated in 1919 and put off his career to serve his country.  That same year he was a Second Lieutenant in the Coast Artillery Section of the United States Army.

At the war’s end, Albert was listed as “general superintendent of construction.”  He would go on to become one of the nation’s foremost architects and city planners.  In the meantime, his sisters were growing up as well.

The same year that Albert had graduated from MIT 24-year old Clara Woolie Mayer was studying at the New School for Social Research.  It was a decision that would affect her life and the history of the university. 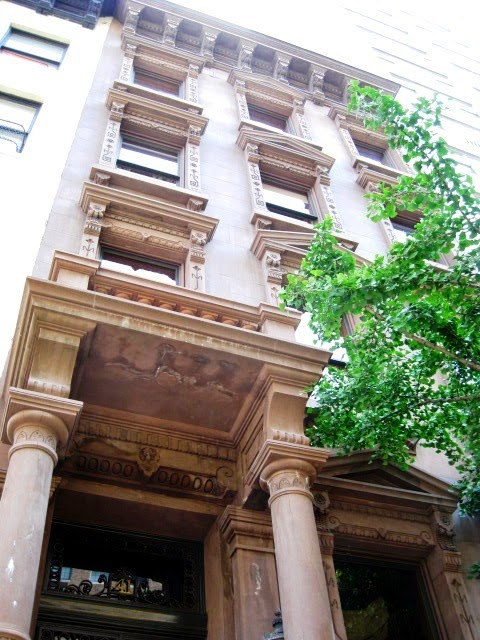 Entertainments in the Mayer home were normally understated.  But on Wednesday June 6, 1923 Sophie Mayer hosted a reception and dance in honor of Theresa and her finance, Milton I. Durlach.  The American Hebrew and Jewish Tribune noted that the groom was “of New York and Porto Rico.”
Clara Mayer remained unmarried and continued her affiliation with the New School for Social Research.  In 1924 she became a trustee; and in 1930 she was elected secretary.

Somewhat unexpectedly the staid brownstone house would hear the laughter and footsteps of children again in 1942.  World War II was raging in Europe and Albert, now a Captain with the United States Army Engineer Corps, was married to the former Phyllis Carter.  Born in England, she was a stage actress who went by the name Phyllis Joyce.  In September 1942 she was a member of the cast of Noel Coward’s comedy “Blithe Spirit” on Broadway.

With Albert serving his country in wartime again, Phyllis felt a need to do the same.  She left the cast and announced she would leave for England to drive an ambulance for the Women’s Auxiliary Territorial Service.  But there was the not-so-small matter of the couple’s two children—7-year old Stella and 6-year old Kerry.

On September 21, 1942 The New York Times reported that the children “will make their home with their paternal grandmother, Mrs. Bernhard Mayer of 41 East Seventy-second Street.”

As mid-century came and went Clara was left alone in the 72nd Street house.  In 1950 she was made Dean of the School of Philosophy and Liberal Arts and Vice President of the New School o Social Research.  As the 1882 houses around hers were demolished or radically transformed; Clara changed nothing.

There are at least two other vintage dwellings in Manhattan that remained preserved in time because, like Clara, an unmarried family member survived for a long period of time.  The Treadwell House on East 4th Street and the Francis Huber House on East 17th Street are examples.  Immune to the changes outside their windows, the unmarried women lived on among their family heirlooms for decades.

Nearly eight decades of Mayer life inside the house would come to a rather unexpected end in 1974.  Clara was a member of the Managing Committee of the American School of Classical Studies at Athens.  The school had no headquarters in the United States and for years the committee was concerned about its need for a headquarters in which to store records, and to possibly house the schools United States Publications Office.  The problem was financing.

At the May 1974 meeting of the Committee the issue was raised once again.  The 79-year old Clara Woolie Mayer proposed a solution.  She would donate her family home along with a $50,000 endowment.  In November the Board accepted the generous gift.  Clara packed the family belongings, many in the house since 1899, and moved to Los Angeles.  She died there at the age of 93 on July 20, 1988.

The American School of Classical Studies would share the house with the Royal Oak Foundation.  The group is the American affiliate of Britain’s National Trust, pledged to preserve historic properties.  In 1981 the Landmarks Preservation Commission remarked that the Mayer House’s “fine 19th century interiors survive.”  It remains a remarkable slice of 1880s New York on busy East 72nd Street.