On October 24, 1897 The New York Times reported that the wealthy socialite Mrs. E. Schiefflin had purchased the lot at No. 3 East 76th Street from Dr. E. Seybel.  By the following year Catherine Schiefflin would own the adjoining plot at No. 5 and set the architectural firm of Parish & Schroeder to work designing two grand limestone mansions.

Completed in 1898 Nos. 3 and 5 were harmoniously designed in the neo-Renaissance style.  The proportions and compositions of the sister homes left no doubt that they were built as a pair or that they were intended for wealthy owners.  The slightly lower stoop of No. 5 allowed for higher ceilings on the parlor level and therefore grander spaces.  The reserved Italian-inspired façade, highlighted by a delicate iron balcony at the second floor, rose to a rather unexpected clay-tiled mansard.

The house was purchased by Clarence Whitman who wasted little time in adapting the mansion to his personal tastes.  On June 10, 1899 architect Charles Alonzo Rich filed plans for alterations amounting to $10,000—over $275,000 today.

Whitman was a wealthy importer of laces and embroidery.  He and his wife had three sons, Harold, Gerald and Clarence, and the family summered in their elaborate country estate in Katonah, New York.

The Whitman boys were nearly grown when the family moved in.  Clarence Morton Whitman graduated from Harvard in 1900 and, like his father, was a yachtsman and clubman.  He left the mansion following his November 19, 1903 wedding in St. Thomas’s Church to Eleanor Motley.

A society event, The New York Times remarked that “It was a white wedding, the decorations of church and house being white flowers and greens.”  The modern couple spent their honeymoon in Southern California rather than making the traditional European bridal tour.

On November 23 the following year Clarence Whitman sold the house to Harold Farquhar Hadden.  Like Whitman, Hadden was an importer.  He was the head of Hadden & Co., which had been founded by his grandfather.  By now it was one of the oldest silk importing firms in the country.

Hadden was educated at Cambridge University and, as expected of moneyed merchants, was a member of several clubs.  The spacious home was necessary for Hadden and his wife, the former Valerie Burkhardt--they had three daughters and three sons.  Their summer home was in Seabright, New Jersey.

In 1904, the same year that the family moved into the East 76th, son William Aspinwall Hadden was admitted to the family firm.  A graduate of Harvard, he had spent two years learning the business and now stepped into the position of President.

But in 1908 the 27-year old contracted typhoid fever.  According to The American Carpet and Upholstery Journal on June 10, “Mr. Hadden was stricken at just about the opening of the carpet season, after a hard Winter’s work, and for a time convalesced so rapidly that his friends were encouraged to believe he would soon be at his desk; but last week his condition took a turn for the worse.”  Tragically, on Saturday morning, June 6 the promising young businessman died in the mansion.

With the construction of the J. J. Wysong mansion at the corner of Fifth Avenue in 1910, the house numbers along the 76th Street block shifted.  Rather than take the prestigious Fifth Avenue address, the new mansion took No. 1 East 76th Street—an address already being used by Charles Hudson.   Now the Hudson house became No. 3, No 3 became No. 5 and so forth down the block.

That same year brought a flurry of social excitement to the Hadden household.  On March 30, 1910 Harold Farquhar Hadden, Jr. was married to Laura Emmet in what The New York Times called “the largest of the Easter week events.”  The newspaper said “St. James’s Church, at Seventy-fourth Street and Madison Avenue, was filled with a fashionable throng.”

Five months later, on August 18, the Haddens announced the engagement of daughter Valerie to Francis Behn Riggs of Seattle.  Valerie’s debut had been celebrated in the house just a few years earlier.

It would be a short engagement.  On October 6 the wedding took place in the same church where her brother had been married; with a reception following at the 76th Street mansion.

St. James’s Church had not seen the end of the Hadden children weddings.  In January 1914 son Gavin’s engagement to Rebecca Lloyd was announced and on February 16, a year later E. Kenneth Hadden married Frances Hawthorne Wyeth.  In reporting that ceremony, The Times said “The wedding…filled the edifice with a large and fashionable assemblage.”  The newspaper noted that following their honeymoon the newlyweds “will live at 7 East Seventy-sixth Street.”

Six months later on August 11, 1915 Harold Farquhar Hadden died in the Seabright home at the age of 60.  Valerie did not stay on in the mansion and within months the Yale Alumni Weekly announced that Herbert Parsons had changed his residence to 7 East 76th Street.  It was possibly Parsons who installed a handball court on the roof in 1917.

While many of the Upper East Side mansions were either razed or converted to apartments in the 1920s and subsequent decades, No. 7 survived as a private residence.  By 1926 it was home to Colonel Thomas H. Birch.  The annual horse show was a major event for Manhattan society and on November 25 that year The New York Times noted that “The third night at the horse show was marked with an unusually brilliant showing of fashion.”  This was partially due to the attendance of the Spanish Ambassador, his wife, and a large entourage.

On the afternoon before The Times article Colonel Birch hosted a luncheon in the house “for the Spanish team of officers who are participating in the international events at the show.”

Throughout the 1930s Mr. and Mrs. Albert J. Erdmann lived at No. 7.  Mrs. Erdmann was highly involved in charitable causes.  In 1932 she was a member of the committee arranging the Vassar Club’s benefit opera “Lucia di Lammermoor” and to benefit the college’s scholarship fund.  She would be a force behind the formation of the Junior Consultation Service that helped drop-outs find jobs with the help of psychologists and vocational counselors.

By the 1960s the mansion was home to Sam Salz, one of the world’s leading art dealers.  Salz dealt mainly in impressionist and post-impressionist paintings; but he was a collector as well.  On February 15, 1964 The Times remarked “On walls in hallways, living rooms, and bedrooms are works of Renoir, Dufy, Utrillo, Brque, Pissarro, Degas, Monet, Cezanne, Rouault, Manet, Sisley and Toulouse-Lautrec.  There are also many pieces of sculpture.”

The Austrian-born dealer lived in the mansion with his wife, Marina, and their two sons.  “On the walls of the bedrooms hang small Vuilllards, Bonnards, Renoirs and Pissaros,” reported The Times’ Milton Esterow.
. 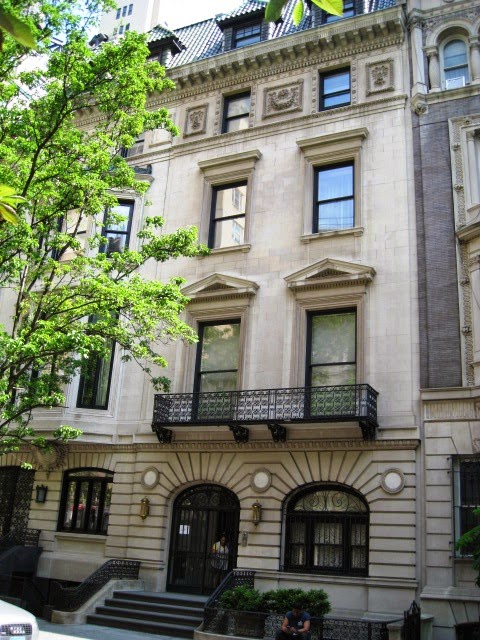