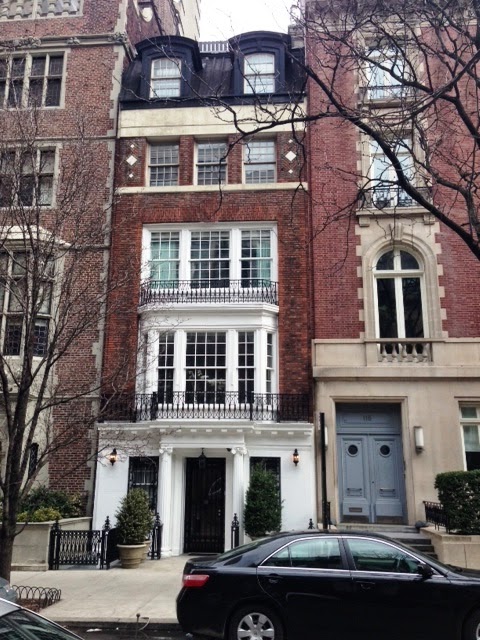 By 1910 moneyed New Yorkers were remodeling or replacing the old brownstone rowhouses of the Upper East Side as the fashionable Fifth Avenue neighborhood spilled eastward.  When the 1870s house at No. 111 East 70th Street, described by The New York Times as a “three-story brownstone dwelling,” became available, the Century Realty Investment Co. saw opportunity.

The firm demolished the old building and commissioned architect William Adams to design an up-to-date, high-end replacement.  Construction began in 1911 and was completed a year later.  Adams turned to the neo-Georgian style so popular with upper crust homeowners at the time.  The architectural style intimated culture and reserve, and eschewed the ostentation of so many mansions of a generation earlier.

Five stories tall, the building consisted of a stone base, three stories of red brick, and a mansard roof with two prominent dormers.  The second and third floors were washed in sunlight through expansive multipaned windows treated nearly as a unit.  The second floor bay, protected by an ornamental iron railing, supported a balcony at the third story.  The red brick was contrasted with white marble.  The new home held its own among the other renovated or replaced upscale dwellings on the block.

The house became home to Albert Burton Strange and his wife Elizabeth Ryle Strange.  Albert was the son of William Strange, founder of William Strange Co., one of the nation’s largest silk manufacturers.  He held the position of President of the Read & Lovatt Mfg. Company, silk throwers.  The couple had three children, Albert Jr., William and Mary.

As World War I erupted, Elizabeth was highly involved in war relief activities and served as Chairman of the Executive Board of the War Relief Committee in New York.  The dynamic woman was also prominent in the Woman Suffrage movement.

Elizabeth Strange briefly put her causes aside in 1917 when she and Albert divorced in October.  That same month she leased the house completely furnished to A. F. Pulido.  According to the Courier-Journal Almanac, Senor Don A. F. Pulido was the Charge d’Affaires of the Venezuela Foreign Legation in the United States.

Within the year, however, Elizabeth Ryle Strange was back in her routine of war relief and charitable causes.  In the spring of 1918 she worked on the committee of the Grand Military and Naval Meet being staged for the benefit of the Women’s Oversea Hospitals.  But soon her attentions would be diverted to important issues closer to home—Mary’s debut into society.

Unlike most debutante entertainments, which began soon after socialites and their daughters returned following the summer season; Mary’s would begin early in 1919 and last through the year.  On January 25, 1919 the New-York Tribune reported on the dance in the house the night before.

“It was one of the large private affairs of the season, the guests numbering about 200.  There was general dancing until about midnight when a seated supper was served, after which the dancing was resumed.”  The guest list included other young women like Grace Vanderbilt and Katherine Mackay; along with the sons of New York’s millionaires with newly-earned military titles.  Among these were Lieutenant Cornelius Vanderbilt, Jr., Captain Schermerhorn, Ensign William Ryle, and Lieutenant Frederick Barbour.

The entertainments for Mary would continue, including a dance at the Colony Club on December 22 and a reception in the house on January 6, 1920.  But it was later that year that society pages printed the most notable news.  On November 9, Elizabeth Ryle Strange, and the wealthy physician, Dr. Henry Arthur Griffin obtained a marriage license and two days later The New York Times reported they “will be married tomorrow at the home of the bride.”

The 55-year old groom was a widower.  The ceremony in the 70th Street house was understated, the New-York Tribune saying it was performed “in the presence of relatives and a few intimate friends.”  Mary Danforth Strange, who had been feted in the house repeatedly during the past year, served as one of her mother’s bridesmaids.

Along with a husband Elizabeth gained two more daughters.  Helen Griffin had recently married Hugh Dudley Cotton; but young Kate Weyman Griffin moved into the 70th Street house.  It would not be an especially long stay, however.  On September 21, 1921 Henry and Elizabeth announced the engagement of Kate to W. Macy Chamberlin, the grandson of William H. Macy.  Mary Strange attended her step-sister at the March 30, 1922 wedding in St. Bartholomew’s Church; and a reception was held in the house afterward.

Mary followed her mother’s lead in charitable work and in 1924 was Chairman of the committee of the Parrot Ball.  The socially-important event was held at the Ritz-Carlton for the benefit of the Junior Auxiliary of St. Luke’s Hospital Social Service.  The New York Times noted that Mary had “secured the services of Miss Helen May, one of Pavlowa’s pupils, well known in London, where she has put on her own ballets.”

In 1930 Elizabeth Ryle Strange Griffin sold the house to Walter Sherman Gifford, President of the American Telephone and Telegraph Company.  The country was deep in the throes of the Great Depression by now and President Herbert Hoover had appointed Gifford Director of the President’s Organization on Unemployment Relief.

On June 2, 1931 the house was once again the scene of a wedding.  Walter’s niece, Barbara Frances Gifford lived in New Rochelle, New York.  Her fiancé, John Reis, Jr., lived in Montclair, New Jersey.  And so the couple apparently chose the half-way mark—the Gifford mansion in New York City—as a convenient spot to be married and for the reception.

Later that year Gifford spoke from the house “over national radio networks arranged by both the National Broadcasting Company and the Columbia Broadcasting System,” according to The New York Times.  He implored those who still had jobs to spend whatever money they could afford to help the economy.  The newspaper said he “urged last night that those who are employed and financially able to do so use their purchasing power to the utmost as the surest and quickest way of alleviating unemployment distress.”

Gifford did not sugar-coat the problem.  In part he said “This depression will not be ended by a panacea.  It is your depression and mine and when and how we get out of it lies in each person’s power to some degree.  Each must consult his own conscience as to whether his course in this emergency is helpful or not.”

In 1947, immediately before his retirement, Gifford sold the 70th Street house to Edward Mortimer Morris Warburg, eldest son of the immensely wealthy Felix and Frieda Warburg.  Known as Eddie, he had grown up in the Warburg’s French Gothic mansion at No. 1109 Fifth Avenue.  Now married to the former Mary Whelan Prue Currier, he would fill the house with art treasures by modern masters including Picasso, Hopper, O’Keeffe, Matisse, Miro, Klee, Calder and Brancusi.

Like his father, Warburg was actively involved in philanthropic and relief organizations.  He was co-chairman of the Joint Distribution Committee in World War II and would become National Chairman of the United Jewish Appeal in 1950.  His passions included the arts, as well.

He had helped found the Harvard Society for Contemporary Art in 1928, was a founder of the Museum of Modern Art, and in 1934 founded the American Ballet with George Balanchine and Lincoln Kirstein.  After graduating from Harvard, he had taught Modern Art at Bryn Mawr College.

Before moving in to the 70th Street house, the Warburgs hired architect Alfred A. Tearle to update and alter the interiors.

The paint was barely dry on the renovated home before Mary Warburg opened its doors for charity entertainments.  On May 11, 1948 she hosted a reception for the benefit of the Henry Street Settlement.  The “One Hundred Club” was organized that afternoon, by which members would contribute $100 annually to the cause.  A committee hoped that $50,000 would be raised for the settlement house each year.

In 1956 Mary’s son Stephen Currier, was working in a Boston art gallery.  The family, accustomed to high-profile society weddings, was shocked on April 22 to learn that he had been married for months.  The Times reported that he and Audrey Bruce were “married secretly last November” by a justice of the peace and “are living in Boston.”

Edward Warburg sold the house in 1962 to actor Anthony Quinn.  The celebrity quickly changed his mind about the residence, however, and a year later resold it to the Government of Uganda.  It served as the country’s Mission to the United Nations for at least two decades before moving to Uganda House at No. 336 East 45th Street.

The Government of Uganda still retains ownership of No. 111 East 70th Street, leasing it as a private family home at a reported monthly rent of  $30,000.