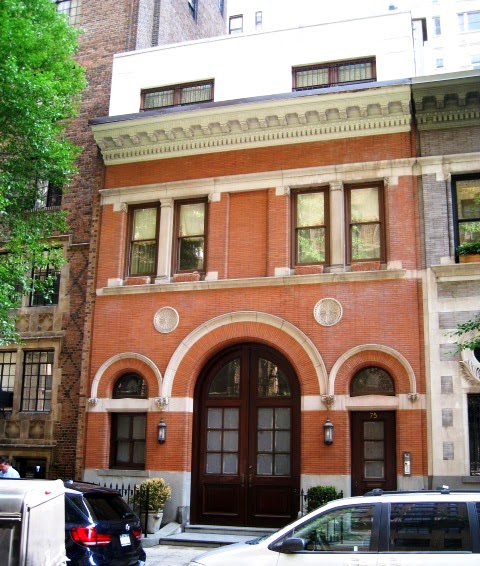 On May 21, 1897 The New York Times reported on the sale of six building lots stretching westward from the northwest corner of Park Avenue and 77th Street.  Henry Hilton had sold the property to brothers William W. and Thomas M. Hall.  As the Upper East Side rapidly developed, the two speculators were among the busiest—responsible for dozens of structures in the neighborhood.

The Halls purchased the real estate on the north side of East 77th Street for a purely pragmatic project.  As Manhattan’s millionaires threw up grandiose mansions along Fifth Avenue they would require private stables.  A wealthy bank or lawyer would own several expensive vehicles, six or more horses, and a small staff of grooms or coachmen.  The location—two blocks from the avenue—was perfect:  close enough for a quick response when a carriage was called for; yet far enough away that the noises and odors could not waft into refined sitting rooms.

The brothers put their architect of choice, Alexander M. Welch of Welch, Smith & Provot, to work on the string of upscale stables.  Their long-standing collaborations would produce a variety of structures more glamorous than homes for horses.  Two years later, for instance, they would team up to produce the lavish mansion purchased by Benjamin Duke at No. 1009 Fifth Avenue.

Private carriage houses reflected the wealth and status of their owners.  Welch, therefore, treated each structure differently while maintaining a harmonious architectural flow.  Each one three stories tall, they shared the same overall layout and proportions.  And each one boasted the extra architectural attention necessary to attract moneyed buyers.

Centered along the row, completed in 1898, was No. 75.  Welch treated the red Roman brick almost as modeling clay.  The long, thin bricks were laid with precise craftsmanship and many were customized for their place in the structure.  Bullnose bricks formed rounded edges to the openings and long bricks that tapered to a wedge-shape created the first floor arches.

The Romanesque Revival façade was relieved with limestone trim—three carved eyebrows above the arches connected by foliate ornaments, bandcourses, plain pilasters between the paired windows above, and two exquisitely carved discs set into the brick. 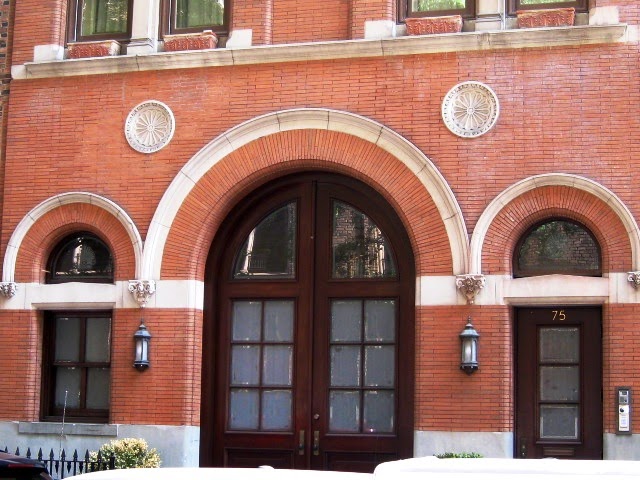 Inside, the stalls and cabinetry were fashioned of oak.  Six horses could be housed in the rear while the vehicles would be stored closer to the front.  Perhaps because of the unpleasant but necessary manure pit in the back lot, upstairs quarters for the coachmen and their families faced the street.  The rear of the second floor contained a hayloft.

The carriage house was especially convenient for James Abercrombie Burden, Jr. who lived at No. 2 East 77th Street, just off Fifth Avenue.  Burden had married Florence Adele Sloane three years earlier in Lenox, Massachusetts.  Florence was the great-granddaughter of Commodore Cornelius Vanderbilt and daughter of the fabulously wealthy William D. Sloane.  Burden’s family’s fortune was made in the iron works founded by his grandfather in Troy, New York.  At the time of the wedding, the young groom had an annual income of more than $1 million.

James A. Burden purchased No. 75 upon its completion.  The convenience of its location would be short lived, however.  Apart from the $700,000 worth of gifts the Burdens had received on their wedding day was the promise of a new home from Florence’s father, William D. Sloane.  In 1901 he commissioned architects Warren & Wetmore to produce a magnificent residence further up Fifth Avenue at No. 7 East 91st Street.

The mansion was completed in 1905 and the Burdens moved north from East 77th Street.  Nevertheless they retained the carriage house for several more years; possibly leasing it to another well-heeled family.

In 1907 the family using the stable cut back on staff expenses as they planned an extended European trip.  Living upstairs at No. 77 East 75th Street were at least two employees; one with his family.  In April that year one coachman got his walking papers.  He placed an advertisement in the New-York Tribune on April 21 looking for employment.  “Coachman—First class recommendations; married, one child; will be disengaged May 1, present employer going abroad.”

Two months later a groom received notice.  On June 25, 1907 he too placed an ad in the New-York Tribune.  “Thoroughly competent in the care of fine horses and carriages; highest written and personal recommendations; will be found willing and obliging.”

Finally on December 31, 1909 The New York Times announced that the Burden “family private stable” had been sold.  By now automobiles were nudging out horse-drawn vehicles as the preferred mode of transportation and throughout the city carriage houses were being converted to garages.  The high-tone neighborhood in which the Burden stable sat no doubt prevented its being reduced to a commercial garage.  As the decades wore on, most of the surviving Upper East Side carriages with their handsome facades were converted, instead, to private dwellings.

And so it would be for No. 75.  In 1930 Robert Nagel leased the building and converted it to a one-family home with private 5-car garage at street level.  The residence was updated in 1971 when a partial fourth floor was constructed at the front of the building and an open air atrium was constructed inside.
Another ambitious renovation occurred in 2005 which, like the former changes, carefully left Welch’s striking façade with its wonderful brickwork intact.  Other than the regrettable barracks-like rooftop addition of 1971 the James Burden carriage house survives charmingly unspoiled.

photographs by the author
Posted by Tom Miller at 3:23 AM