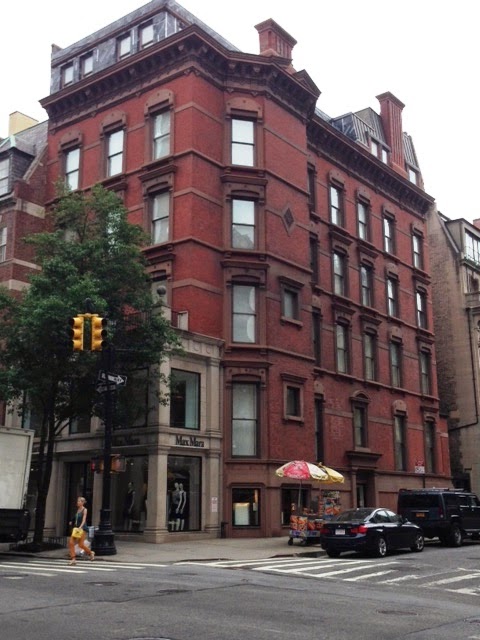 Born in Ladew’s Corners, New York, in 1826, Harvey Smith Ladew learned the art of tanning in his father’s business.  In 1849 he married Rebecca Krom and the pair had two sons, Edward H. and Joseph Harvey, and a daughter Louise.  The year following the end of the Civil War, in 1866, the family moved to New York City.

After serving as a principal in J. B. Hoyt & Co., Ladew struck out with Daniel S. Fayerweather, forming the partnership of Fayerweather & Ladew.  According to the 1897 Prominent Families of New York, the firm “attained the position of the most important firm in the ‘Swamp’ district of New York, and which controlled a large portion of the leather product of the entire United States, and had important interests in all parts of the country.”

While Ladew’s successful leather company was expanding, the Upper East Side was seeing an explosion of development and construction.  Speculative developer and architect Charles Buek was busy at work on Madison Avenue in 1881.  The head of the firm Charles Buek & Co., that year he began construction on six high-end rowhouses on the east side of the block between 68th and 69th Street, and two others on the north side, at Nos. 813 and 815.

Before construction was completed Harvey S. Ladew had purchased the hulking corner mansion at No. 813.  Clad in red brick and trimmed in brownstone, the four-story neo-Grec mansion sat on a brownstone basement.  The composition reflected the acute angles and incised carved decoration typical of the 1880s.  By the time the family moved in, in 1882, the children were young adults and son Joseph Harvey Ladew was attending Columbia College.

Prominent Families of New York remembered Harvey S. Ladew as “a merchant of the old school [who] wielded great influence in mercantile circles.”  Ladew’s great influence would soon draw to a close, however.  During the late winter of 1888 he became ill, and on Friday evening, March 9 the 63-year old died in the house.  Four days later at 10:30 a.m. his funeral was held in the parlor.

Edward and Joseph continued in the family business.  A year after their father’s death, Joseph took his brother in as a partner in Fayerweather & Ladew.  Both men earned substantial fortunes in addition to their inheritances.  Edward would go on to help found the United States Leather company, one of the largest enterprises in the United States at the time.

Joseph Harvey Ladew became well-known among the club set and held memberships in the Union League, New York Yacht Club, Larchmont Yacht Club and many others.  The New York Times referred to him as “the wealthy and well-known yachtsman.”  His love for yachting prompted him to commission the $200,000 yacht Columbia from the Crescent Shipyards in Elizabeth, New Jersey in 1893.  Joseph’s man-toy cost him about $5 million in today’s dollars.

The craft would have an eventful life.  Five years after it was launched from Philadelphia, Joseph Ladew turned the Columbia over to the United States Navy for use in the Spanish American War.  The luxurious ship was renamed the USS Wasp and was used as part of the U.S. blockade of Cuba.  Following the war it was returned to Ladew and rechristened.  Then, in December 1901 the yacht underwent several weeks of refurbishing for a special voyage.

In November that year Joseph Ladew disappeared from the posh clubs he frequented.  “For several weeks Mr. Ladew had been missed by his friends from his usual haunts,” reported The New York Times on December 26.  The reason for his sudden absence was both surprising and shocking.  The newspaper explained “A Christmas surprise was sprung on the friends of J. Harvey Ladew…when it was published yesterday that on Nov. 27 Mr. Ladew had been married to Miss Jennie Bennett House of Rochester, N. Y.”  The Times said “Only the immediate members of his family knew of the secret.”

Joseph and Jennie had known each other for years; however she was married to Henry Hawkins.  When they accidentally ran into one another while traveling in the South—she accompanied by an aunt—Jennie had just obtained a divorce and resumed her maiden name.  “Shortly after the meeting of the two, an immediate marriage was decided upon,” said the newspaper.

Joseph quickly ordered that the Columbia be fitted out “for a protracted cruise.”  After a month’s preparation of the ship, the newlyweds sailed to the Mediterranean for their winter honeymoon.  The New York Times noted “Mr. and Mrs. Ladew will make their home in New York, at 813 Madison Avenue.”

In the meantime Edward Ladew had married Louise B. Wall in 1886, and Louise Ladew married John Townsend Williams.  Louise and John lived next door at No. 815 Madison Avenue.  By the time of Joseph’s wedding Louise’s daughter, also (and confusingly) named Louise, had been introduced to society.  In 1904 the debutante would become a bride in “The first big wedding of the season,” as described by The Sun on October 30.  Following the fashionable ceremony in St. Bartholomew’s Church, Rebecca Ladew hosted the reception for her granddaughter in the Madison Avenue mansion.

The wedding reception would be among the last entertainments Rebecca Krom Ladew would see in the house.  Six months later, on Wednesday, April 26, she died of pneumonia in Asheville, North Carolina.  “The entire family was summoned to the South,” said The Times on April 27.  Rebecca’s body was returned to New York and on Saturday, April 29 at 11 a.m. her funeral was held in the parlor where Harvey’s funeral had been conducted 17 years earlier.

Joseph and Jennie continued to live in the family mansion.  In February 1906 the couple had a scare as they rode in their stylish brougham.  An automobile frightened the team of horses and they panicked.  Coachman Thomas Burton tried to control the animals; but was thrown from the carriage when they veered sharply onto 92nd Street at full gallop.  Still in the driverless vehicle, the Ladews were taken on a terrorizing ride that came to an abrupt end.

“Then they turned north at full speed and dashed toward a crowd of passengers just landed from an Astoria ferryboat at Ninety-third street,” reported The Sun on February 23.  “A policeman and several men darted from the crowd in an effort to head off the frightened animals.  The horses swerved toward the ferry house and crashed into it, one of them falling and the other barely missing a fall into the river.”

One of the horses was so badly injured that an S.P.C.A. agent who happened to be at the location advised shooting it.  Ladew consented.  The Sun advised “Mr. Ladew was not injured, but Mrs. Ladew was prostrated by the shock and badly bruised.”  The couple returned home to Madison Avenue in a cab.

In 1913 the family took the Columbia to Asia.  Included in the party were Joseph, Jennie, and their two sons, Joseph and Oliver; Edward’s daughter Elsie and son Harvey; and guests Hilda Holmes, Annie Wall and Juan M. Ceballos, Jr. the son of a Cuban banker.  Trouble came on June 11 when the crew steered the craft into the Wakayama port for repairs.  “Wakayama is not an open port because of its proximity to Japanese fortifications,” explained The Evening Independent of St. Petersburg, Florida.  Japanese officials were not pleased with the incursion and seized the vessel.

The Los Angeles Times reported “The American Yacht Columbia, with its owner, J. Harvey Ladew of New York, and his party aboard, was seized today by the Japanese authorities at Wakayama.”  The Evening Independent was more concerned with the debutante on board.  Under a headline reading “Miss Ladew Was Aboard Yacht Seized by Japan”, the newspaper reported “Miss Elsie Ladew, one of New York’s most beautiful and popular society girls, is a member of the party on board the Ladew steam yacht, Columbia, which was seized by the Japanese government.”

Eight days after the yacht was “sensationally seized,” as described by The San Francisco Call, the newspaper reported that the Columbia had been released and was on its way to China.  The release had been negotiated by the Secretary of State after the seizure became an international incident.

In 1917 the Ladews added a penthouse to the roof of the mansion.  Designed by architect James W. O’Connor, it cost the family $5,000.  The following year, on April 27, the Real Estate Record & Builders’ Guide reported that O’Connor had finished plans for additional “alterations and addition” to the house, costing $3,000.

But as World War I drew to a close Madison Avenue was becoming increasingly commercial.  By the spring of 1921 the family had decided to move on.  On May 19 that year the New-York Tribune reported that Jennie Ladew had leased “for twenty-one years her four-story and basement residence…to the 33 East Sixty-eighth Street Corporation, composed of several well-known physicians, which will alter the property into a doctor’s office building.”  The $300,000 21-year lease grossed the Ladews the equivalent of $175,000 a year by today’s standards.  To accommodate the medical offices, a storefront was added and the penthouse and rear extension enlarged.

Joseph Harvey Ladew died on February 16, 1940.  Five years later, on September 24, The New York Times reported that “In its first change of ownership since 1880, the property at 813 Madison Avenue…was sold by the City Bank Farmers Trust Company, as trustee for the Ladew Estate, to the Tishman Realty and Construction Company.”  The newspaper noted that the former mansion “contains a store leased to Womrath Book Shops and upper floors are occupied by doctors.  The assessed valuation is $180,000.”

Madison Avenue retained its high-end tone throughout the 20th century.  For years, beginning in the 1960s, the retail space was home to the showroom of designer Veneziano.  In 1971 the building received a new two-level storefront as high-end designer Halston opened his new salon.  Rebecca Ladew would no longer have recognized her drawing room or parlor.

New York Magazine described “ivory walls and cushions, carpet the color of wet sand, and mirrored walls, screens and plant tubs everywhere…Up the jazzy modern staircase, inherited along with slanting two-story windows from the previous tenant, are the more expansive cashmere sweaters and trousers which are the uniform of the Halston woman by day, and the sexy, wrappy jersey dresses she wears at night.  There is a studio for Halston and a mirrored room for private clients who don’t like to riffle through the racks.”

When Halson died in 1990 his boutique store was still at No. 813 Madison Avenue.  But within three years the building was purchased for $6.9 million by MaxMara, an upscale Italian women’s fashion company.  The new owners set architect Frederic Zonsius to work renovating the structure.

On January 2, 1994 The New York Times said “An old six-story building on the Upper East Side is getting a facelift.”  The newspaper deemed “Most notable will be the new limestone shop-front on the first two floors.”  Zonsius’s renovations would cost between $500,000 and $1 million.  The architect told The Times “We took old historical photographs and blew them up and tried to copy what we believed was there.” 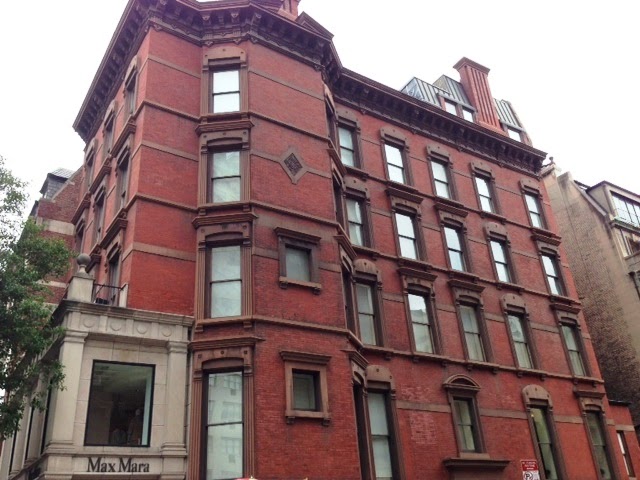 In a nearly unheard of restoration by a commercial firm, the decorative brownstone elements, shaved flat in a mid-century modernization, were recreated.  Considering such intricate research and care, the new storefront is somewhat surprising.  While not unattractive, the limestone storefront of engaged columns and pilasters under a frieze of blank discs has nothing in common with the house either in materials nor style.  Nevertheless, an enormous amount of the original Ladew mansion still survives—looking as much like a late Victorian apartment house as a massive single home.

non-historic photographs taken by the author
Posted by Tom Miller at 3:00 AM