The Surprising Studio at No. 114 Waverly Place

When George P. Rogers began construction on the first brick mansion on the north side of Washington Square in 1828 the area was still so far north of the established city that the residence was considered his “country house.”  Only two years earlier the square had been used as a potter’s field.


Yet development had already crept into the district.   Before Rogers contemplated the area for his elegant new home Thomas R. Mercein had begun work on a row of nine speculative rowhouses just off the square on Waverly Place.  Mercein was president of the New York Equitable Fire Insurance Company and his row of houses reflected the burgeoning growth of the Village of Greenwich in the 1820s.


Completed in 1826 the Federal-style homes were faced in brick with dormered attics and paneled brownstone lintels above the windows.    By 1842 Richard R. Smarte was living in No. 114, listing his occupation as “accountant.”


Near-lethal problems arose in the house in mid-May 1878.  Without warning the wife of Francis B. Brown was “suddenly attacked with chills, followed by high fever and general prostration,” as described by The Metal Worker on May 18.  Within the week other members of the family suffered the same symptoms.


Doctors arrived at the house, trying to discover the source of the mysterious illness.  Dr. Alfred S. Purdy of 288 Madison Avenue was called in, who forwarded a report to the Board of Health.  Professor Chandler was notified and he sent an inspector, Dr. R. L. Wilder, to further investigate.  Finally, reported the Medical Record, “The report of Dr. R. L. Wilder fully confirmed the worst suspicions that had been entertained, there were no traps under any of the wash basins or bath tubs and a free passage for sewer gas was therefore given.”


In an effort to modernize their home, the Browns had indoor plumbing installed.  But their contractor did a shoddy job at best.  The Metal Worker reported “large quantities of sewer gas” were found in the house.  Wilder called it “the worst piece of plumbing work we ever heard of,” and The Metal Worker (with obvious disdain for New York City) added “It was almost incredible that such bad work could be found, even in this city.”


The Board of Health “very promptly issued peremptory orders” to have the situation corrected.


As the 19th century wore on, most of the homes along the row eventually became boarding houses; while steps away on Washington Square the refined mansions remained single-family homes of the wealthy.   In 1885 the Rev. J. S. Atwell lived in No. 114, and by 1893 it was home to Edward L. Connell, “baritone,” and Frederick Marschall.


Marschall was not only an artist and illustrator, he was somewhat of a self-styled music critic as well.  When he attended the piano recital of Eugenie Castellano on Wednesday, January 18, 1893, he left with a favorable impression of the pianist.  The New-York Tribune was less enthusiastic about the performance.


Within days Marschall penned a letter to the editor rebuking its review.  He said that he had been “anxious to see the Criticism in Your valuable Paper which I read daily—I was pained to see the Brutal manner in which Your Critic assailed this young and talented girl.”


Marschall took the opportunity to poke a retaliatory jab at the critic.  “The only explanation I can find—is—that Your Critic did not receive the Customary Tip.  Respectfully Yours, Frederick Marschall.”


Two years earlier Marschall had illustrated a book of verses about the sea, published by De Wolfe, Fiske & Co. of Boston.  Along with his commissions, he served on the faculty of The Sharp Art School, teaching decorative painting.  Marschall and his singing co-resident would be the first wave of artistic types at the address.


Also in the building at the time was the remarkable Adelaide Rosalie Hasse.   Intelligent and aggressive, she did not always win over male Victorian co-workers who expected women to stay at home pouring tea.  Hasse landed a position in the new Astor Library and set to work organizing the world’s largest collection of government publications, which dated back to colonial days.   She is credited with the development of the Superintendent of Documents Classification system still used by the Government Printing Office today.


Frederick Marschall’s presence was a hint of change that would come to the Waverly Place block by the turn of the century.  Greenwich Village became New York’s version of Paris’s Left Bank as artists and musicians were drawn by the picturesque winding streets and charming buildings.  Cashing in on the movement, property owners converted old structures into artist studios, with expanses of glass to provide natural light.


In 1920 artist Murray Percival Bewley sought out the services of architect William Sanger.  The architect transformed No. 114 Waverly Place from a prim Federal residence to fantastic artists’ studios.

Bewley was born in Fort Worth, Texas on June 19, 1884.  His mother was an avid patron of art and inspired him to develop his talents. After years of study in Denver, Chicago and Pennsylvania, he arrived in New York where he studied under Robert Henri and William Merrit Chase.  He traveled with Chase to Florence; then lived in Paris from 1906 to 1913 where he continued his studies and exhibited his works at the Salon.  After marrying Bernice Wren, also of Fort Worth, he brought his bride to New York in 1916 and staged his first one-man show at the Feragils Gallery.


By now innovative architect Frederick Junius Sterner had been transforming outdated Federal and mid-Victorian homes into neo-Tudor and Mediterranean-style fantasies across town in the East Village.  William Sanger now took a page from Sterner’s book.   His completed studio building, slathered in stucco, exhibited romantic hints of Italy with decorative pseudo-balconies, arched openings, and off-set studio windows with French doors.  The stoop and English basement remained nearly unnoticed because above it all Sanger’s design detonated with a soaring, sensuously-curved roofline encompassing an expansive studio window.


Bewley’s focus was on portraiture and his ability to capture light and shadow was masterful.  But he stayed in the Waverly Place studio only until 1924 when he left New York for good.


When debutante Elizabeth Consuelo de Cravioto returned to New York after a year of finishing school in Paris and “a course of sculpturing,” she continued her art studies.  Her mother apparently whole-heartedly supported her artistic bent; procuring an apartment and studio in No. 114 Waverly.


On January 27, 1929 Mrs. L. Ryals de Cravioto announced the engagement of Elizabeth to Magill Smith of New Orleans.  One month to the day later, The New York Times reported on the wedding of “the first debutante of the season to be married.”  The ceremony took place in the fashionable St. George’s Church on Stuyvesant Square, “using the double ring ceremony.  Old French rings, each a double circle of gold, heirlooms of the family of the bridegroom’s mother, were used.”


Relations between Mrs. de Cravioto and the bride’s father, Senor Carlos Cravioto were apparently somewhat strained.  He chose to remain in Mexico City rather than attend the wedding.  Following the ceremony the guests moved across town to the roomy Waverly Street studio for a reception.


Like Mrs. De Cravioto, who remained on in the apartment after her daughter’s wedding, not all of the residents were artists.   In January 1941 IT&T executive Edward James Walsh was recalled from Antwerp, Belgium as the German invasion washed over the country.  Walsh and his wife moved into No. 114 where he died a year later on November 6, 1942.


At the time artist Jacob Getlar Smith lived and worked in the building.  On January 10, 1943 The Brooklyn Eagle announced his exhibition of 26 watercolors he had executed within the past three years.  Among the works was “Waverly Residence,” which the newspaper called “an accomplishment in picture building.  It is a case of seeing a commonplace brownstone house in an interesting way of lighting, color and composition.”


Smith’s muscular style resulted in several WPA/Federal Art Project works, including murals.  He sometimes used men hired by the government’s work relief program as his subjects.  His ability to see the uncommon in the commonplace is reflected in his moving works.  The artist once explained himself, saying “The artist should be a seeing-eye dog for a myopic civilization.”


The unexpected studio building on Waverly Place has been painted a bright but pleasing coral pink.  Although the original color scheme which set apart the massive, curving upper floor is lost, the flavor of Sanger’s original design is as fresh as it was in 1920. 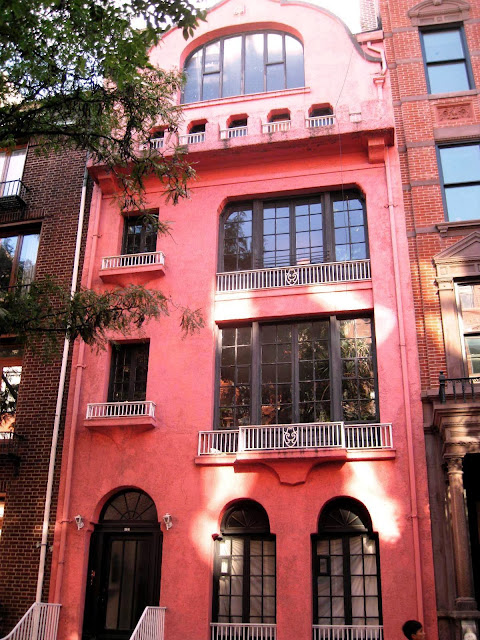 Architectural historians argue about the style of the architect’s design, especially that sinuous roofline.   The Landmarks Preservation Commission calls it “French Art Nouveau,” another critic deems it “Jugendstil.”  Call it what you will, it is remarkable and wonderful.