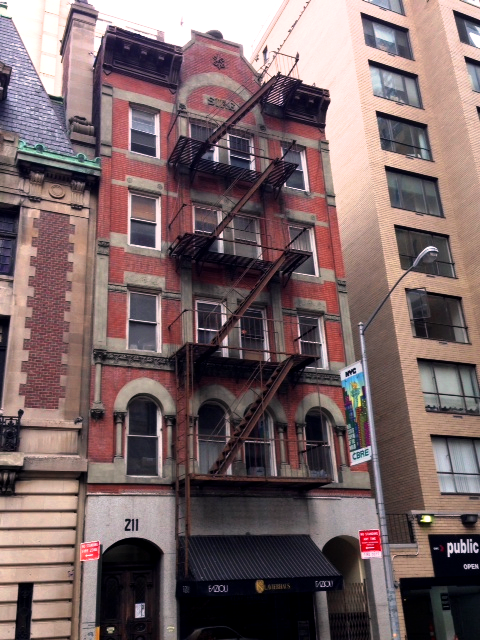 By 1885 the block of West 58th Street between Seventh and Eighth Avenues was lined with handsome private carriage houses.   That year Albert I. Sire completed his own at No. 211, next door to that of Lambert Suydam directly behind his mansion that faced 59th Street.


The ambitious and wealthy Sire had widely-divergent interests.  An attorney, he was also a partner in Sire Brothers which managed the New York Theatre and the Casino Theatre; and was well-known as an owner and racer of trotting horses.    But it was his real estate development side that would manifest itself in his personal carriage house.


As President of the Madison Avenue Real Estate Company he not only bought and sold properties, but developed commercial and residential buildings.  His calculating mind would produce an anomaly among the block of millionaire’s private carriage houses.


His eclectic building combined elements of Victorian Gothic at the second floor—engaged stone columns upholding limestone arches that nearly, but not quite, came to a point; and matching columns on carved brackets at the far sides—floriform carvings of the Aesthetic Movement, and a stepped gable that hinted at Flemish Revival.  Below the central parapet in carved stone letters Sire emblazoned his name.


While the other carriage houses provided shelter for expensive horses and vehicles on the first floor and lodging for groomsmen or stable boys on the upper floors, the Sire building doubled as an apartment house.  The three upper floors were income producing residential space—a nearly unheard of concept (especially considering the noises and offensive odors of the stables).


Although Albert I. Sire owned a horse farm at Morris Farms, New Jersey; he apparently sometimes boarded his trotters in the city.   On Christmas Day, 1886 he ran an advertisement in The Spirit of the Times with the eye-catching headline “SPEED! SPEED!! SPEED!!!”  It offered for sale “The well-known trotting horse Black Prince…Also, the black gelding Judge Russell, record 2:32 can trot in 2:30.  Both will be sold at a reasonable price.”  The advertisement directed to apply to Sire’s employee, A. Straut, at 211 West 58th Street.


On October 12, 1889 The New York Times reported on the trotting races at the grounds of the Driving Club of New-York.  The newspaper included Albert Sire among “The cream of New-York’s trotters and owners of trotters.”


In the meantime, a variety of tenants were living above Albert Sire’s expensive horses.  Architect Thomas S. Goodwin was here in 1893, and before long attorney William Woods moved in.  The lawyer found himself on the wrong side of the legal system in September 1897.   It all began when the E. S. Dean Company, “discretionary pool operators,” went into bankruptcy in the spring of 1896.  Samuel Kellar had been the manager of the establishment and he was arrested on a civil order in April, but later discharged.


Woods was approached by Robert A. Ammon, the former president of the Mining Exchange, and lawyer William A. Sweetser with a scheme to blackmail Kellar.  The trio sent him official-looking letters declaring they had documents which, if made public, would send him to jail.  The lawyers offered to destroy the documents for $30,000 (about three-quarters of a million dollars today).


Unfortunately for the blackmailers, Kellar instead went to detectives who instructed him to meet the extortionists with marked bills.  Immediately upon the exchange of the cash, the detectives swooped down on the crooks.  The money was found in Woods’ pocket and he was held on $1,000 bail.


A year later Albert Sire found himself acting as attorney for one of his tenants.  Mary Kupper and her husband occupied an apartment above the carriage house.  When George Peterson arrived to deliver coal one day, Mary pointed out the coal hole cover in front of the building.  When the delivery had been made, she remembered clearly “after the coal was in I saw that the man shut the cover, and tried it with the shovel, and then he moved away.”


A day later John Finn was walking along West 58th Street and fell into the coal hole in front of No. 211.  Shaken and covered with coal dust, the angry man initiated a law suit complaining that not only had Peterson not properly replaced the cover; but that the Mary Kupper and her husband were negligent for omitting “to carefully close said coal hole, and fasten the cover thereof.”


Sire defended his tenants through two trials over the accident.


By 1901 when Sire’s carriage house was sold, there had been a one-story addition built in the rear.  Albert and his brother had experienced major financial difficulties concerning their theaters in 1900, which possibly resulted in the foreclosure sale the following year.


Incidentally, Albert Sire’s problems only worsened within the next few years.  On October 29, 1903 his 33-year old wife, Beatrice died suddenly in their mansion at No. 22 West 59th Street.  The death was explained by the coroner as a macabre accident—she reportedly drank carbolic acid “having been taken in mistake for medicine.”


But the family gave another version.  Clarence Sire insisted that she suffered a heart attack and that Albert was at her bedside when she died.  “She had been ill for eight or nine months,” he said.


The fact that the death was not immediately reported coupled with the somewhat confusing circumstances resulted in an inquest.  That inquest ended in a shouting match between coroners, described by The New York Times as a “lively quarrel,” and Coroner Scholer pronouncing Coroner Jackson “unfit for office.”  What was decided, at least, was that Beatrice Sire died of carbolic acid poisoning, not heart disease, “though whether the acid was taken intentionally or not [Coroner Jackson] was not prepared to say,” said The Times.


Actress Rose Beckett was living in No. 211 at the time.  She was found dead in her apartment on Friday, April 8, 1904.  An autopsy revealed that she had died of natural causes.  In reporting the case, The New York Times parenthetically mentioned another tenant.  “George Rossiter, a boarder,…was sent to the alcoholic ward of Bellevue.”


Three years later John O’Malley was living here when he borrowed the car of F. A. Dwyer so he could drive himself to the Metropolitan Race Track in Jamaica, Queens.   When he sped past the Brooklyn Headquarters motorcycle squad, a chase ensued.    The Brooklyn Daily Star reported on the three-mile chase.  The officers clocked him “on the Hoffman Boulevard, and he was pursued down the Boulevard to Hillside avenue and then to the Merrick road before he was taken into custody.”  He was charged with driving at the break-neck speed of thirty-five miles an hour.


By the time the T & S Realty Company sold the building for over $110,000 on February 16, 1915, the former carriage house level had been converted to commercial space.   The sale document described the property as “a five-story tenement and store building.”  It would appear, however, that the “store” was actually an automobile garage and showroom.


In November 1920 the “store” was leased to the Motor Hearse Corporation of America; and the following year in December it became home to the Commerce Truck Corporation for its offices and showrooms.


A few years earlier, in 1916, Norman St. Clair Hales had moved in upstairs.   During his long residency here the actor became friendly with the men of the fire station two buildings away.   On December 30, 1929 he was invited to an informal party in Engine Company 23 celebrating the upcoming promotion of Lieutenant P. Joseph Connolly.  Around 2:00 in the morning Hales and Fireman Thomas J. Walsh were on the third floor of the firehouse where Hales was “doing contortionists’ tricks.”  When he stumbled and lurched towards the fire pole opening, Walsh shouted a warning and grabbed for him.


Hales caught the fireman’s arm, but now both men were pulled off balance and fell through the opening.    Hales hit the second floor first, with Walsh falling on top of him.  Just as the firemen were carrying Hales downstairs, a fire alarm came in.  In an attempt to ensure that the ambulance would find him, they deposited the actor on the sidewalk outside No. 211.
When the ambulance arrived from Metropolitan Hospital, Normal St. Clair Hales was dead on the pavement.  A subsequent inquiry exonerated all persons present at the fire station.

By 1930 The Broadway Tabernacle Church had taken over the old carriage house and garage space.  The church had previously been located at 56th Street and Broadway (hence the name) and would operate from No. 211 for decades to come.


Meanwhile, the personnel director of the popular-priced Grand Opera Repertory was living in one of the apartments.  Orlando Crawford was 22 years old when he was arrested on June 11, 1933 for violating the Sunday Closing Law by staging a production of Rigoletto at the New York Hippodrome.


Crawford and his cohorts apparently did not learn their lesson.  Two weeks later, on June 25, they were in handcuffs again for the same crime.


The some time during the 20th century the neighborhood had been the piano district with manufacturers like Steinway and Chickering erecting grand buildings to showcase their instruments.   In 1984 the ground floor of No. 211 became home to the Museum of the American Piano.   Museum director Kalman Detrich displayed approximately 18 instruments, piano-making tools, catalogs and photographs.


Later, for several years, the ground floor was showroom to piano merchant Klavierhaus.  Then, in August 2013, Carl Demler, owner of Beethoven Pianos, purchased the building as its piano showroom.


Although a zig-zagging fire escape mars the remarkable façade and the first floor has been covered over in a concrete-like substance, Albert Sire’s highly unusual carriage house/apartment building is a delightful survivor. 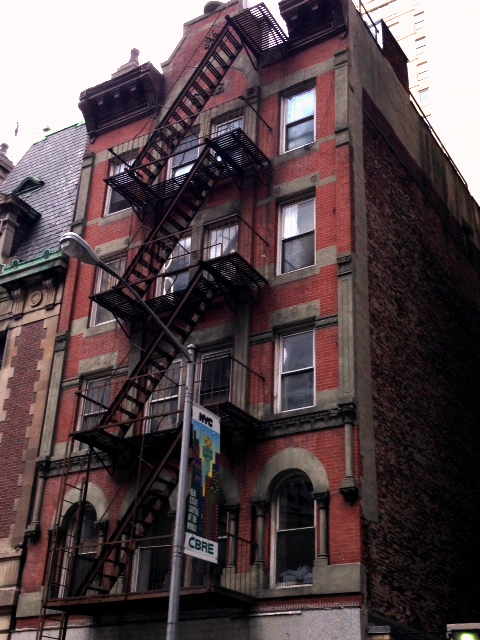 photographs taken by the author
Posted by Tom Miller at 3:05 AM