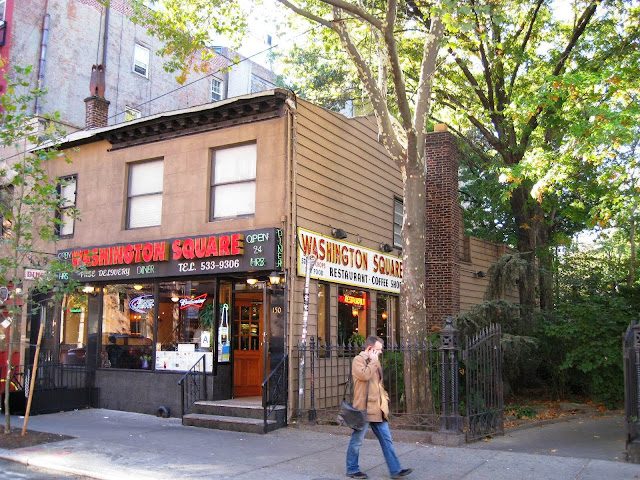 In 1822 panic overtook New York City as a devastating by a yellow fever epidemic decimated the population.  Many of those citizens with means enough to flee headed north to the sleepy village of Greenwich.  Within a few years new Federal-style brick homes lined the winding streets as the village burgeoned.


Just to the east, near the potters’ field that would become Washington Square, sat a small two-story frame house with a brick facade. By the time the newcomers were settling in the Village the little building with its shallow peaked roof at No. 150 West 4th Street had stood for at least a generation.   Years later in 1917 the New-York Tribune would comment that it “was originally a farmhouse when it was built, more than a century ago, a mile north of the city.”

In 1828 the first house was constructed on the north edge of Washington Square, now a formal park and parade ground, and within the decade fine brick homes would appear all around the tiny wooden house.  Miraculously, it remained.

By the turn of the century Greenwich Village was no longer a separate community, but a district within New York City.  It teemed with variety of residents:  the affluent old families of Washington Square, the slum dwellers in the Minetta Lane area, Italian and Irish immigrants in the recently-built tenements, and middle-class working families.  And it was quickly attracting artists, poets, musicians and authors as Greenwich Village became New York’s answer to the Left Bank of Paris.

In 1916 sculptress Edith Unger opened a tearoom called "The Mad Hatter" in the cellar of the little building at No. 150 West 4th Street.  It claims the distinction as the first tearoom in the Village; based on the fact that the earlier subterranean establishments also served wine; making them technically not “tearooms.”   Unger’s cozy below-ground shop would become famous among the hidden Bohemian destinations haunted by the artsy crowd.

Above the stairs leading down to The Mad Hatter, Edith painted the words “Eloh Tibbar Eht Nwod”—a tongue in cheek backwards spelling of Down the Rabbit Hole.   Along with tea, patrons could also purchase light fare.  In 1939 the Federal Work Administration’s New York City Guide remembered that “Here commercialism, even on the part of the proprietress, scarcely existed.  Meals were written on the cuff, never to be erased; but all "true" Villagers were welcome so long as they kept the conversation flowing well into the night.”

“The front room, perhaps twelve feet deep and fifteen feet wide, contains four small round tables, half a dozen chairs, as many little wooden benches built for one, and two wall-seats.  Eighteen persons crowd it.  Between the rooms is a wide and venerable chimney, with the big open fireplace facing the rear room.  In that rear room (of about equal size) are no chairs; only narrow wooden benches around the walls, and little wooden tables and little wooden one-person benches, and shelves for dishes.

“All the old walls and the chimney are painted in quiet gray or pale yellow.  The walls of the back room are covered with drawings done by various artists, and nearly all the drawings represent characters or scenes from ‘Alice in Wonderland.’”

The ceilings were no more than six feet high and the floorboards were the original, century-old boards.  “A pot of coffee is simmering on the stove in the back room, an ice-cream freezer stands just outside the back door, and cakes, and bread, and tea, and muffins, and jam appear from somewhere when called for.  Toast also appears, but about half the time it is forgotten after being put in the oven, and eventually it ceases to be toast.  Then somebody smells it, and the process is repeated.”

The publication remarked on the Villagers who came here.  “They are gentlemen and gentlewomen.  None others find comfort there.  There is nothing boisterous—just a hum of conversation; a haze of tobacco smoke; a cheery greeting for the newcomer; a chuckle or laugh over a funny story; a discussion (occasionally general) concerning some phase of literature, art or social conditions; a narrative of experience in some far region or unusual situation.  All under the flickering light of candles whose guttering, in some cases, have completely hidden the candlesticks that hold them.”

Before long Edith would hire the fascinating Eliza Helen Criswell.  Eliza had graduated from Bryn Mawr College in 1904, where she had been captain of the basketball team.  Comfortable with her sexuality, she insisted on being called Jimmie, James or Jim.

Jimmie Criswell took a part-time job at The Mad Hatter to supplement her income teaching languages.  She met Mathilda Spence and the two took a room in the Village.  Jimmie cut her hair short, cast off shoes in favor of sandals, and took to wearing artsy smocks.  For more formal events, she would don a tailored suit and tie with a wide-brimmed slouch hat.


Edith Unger would not keep The Mad Hatter for long.  Whether because of her strenuous schedule of sculpting and designing; or because as some reports say she was being harassed by uptight neighbors, in July 1917 she sold the business to Jimmie and Mathilda.

The relationship between the pair eventually dissolved and when Mathilda left for Europe, Jimmie stepped down from her teaching position to devote all her time to the tearoom.   Her presence in the smock and tie of a French artist added to the atmosphere of the picturesque café.


By now the Village tearooms were destinations for “slummers,”--the upper or middle-class residents of respectable neighborhoods who came to see how Bohemians lived and behaved.   The establishments were painted as semi-shocking places where men wore long hair and women short hair; where a female patron could freely smoke a cigarette; and social ideas were dreadfully modern.   Women’s magazines depicted the tearooms as places were women could go even without a male escort.


Despite the intrusions by non-Villagers, the artistic set continued to call The Mad Hatter home.   On any particular night one might run into Sinclair Lewis, Lewis Mumford, the Gish sisters, poet Harry Kemp, or journalist Hendrik Willem Van Loon.


Somewhat unexpectedly, considering Jimmie’s sexual history, a relationship developed between her and Van Loon.  She reportedly was starved for real affection and responded to his courteous behavior and attentions.  In turn she typed his manuscripts, mended his clothes, and did other little favors.  Despite the fact that he was already engaged to New York Evening World journalist Rene Gibbs; he proposed and Jimmie accepted.

Harry Kemp was seated in The Mad Hatter one night in 1922 when an attractive red-haired woman in her 20’s stepped into the dim room.  The poet was so taken with the Barnard graduate that he declared “I’m going to marry you.”  In 1923 he did just that.

Frances McClernan soon found out that marrying a nationally-recognized poet did not translate into marrying a comfortable lifestyle.  In addition to her modeling jobs for Camay Soap and the B. Altman & Co. catalog; she took a job as manager of The Mad Hatter three nights a week.  “I had a husband to support,” she explained.

Jimmie’s marriage to Van Loon did not last and in 1927 he married playwright Frances Goodrich Ames.  When he divorced her, he and Jimmie reunited; although whether they actually remarried is unclear.   When he died in 1944 she inherited the bulk of his estate.


In 1946 the building was sold; assessed at the time at $21,000—about $185,000 today.  The Mad Hatter had been gone for at least a decade and the sidewalk entrance to the cellar was paved over.  Any hint that a cozy and artistic tearoom had ever existed was obliterated.  An expansive storefront had been installed at street level; although the original residential nature of the building was still obvious above. 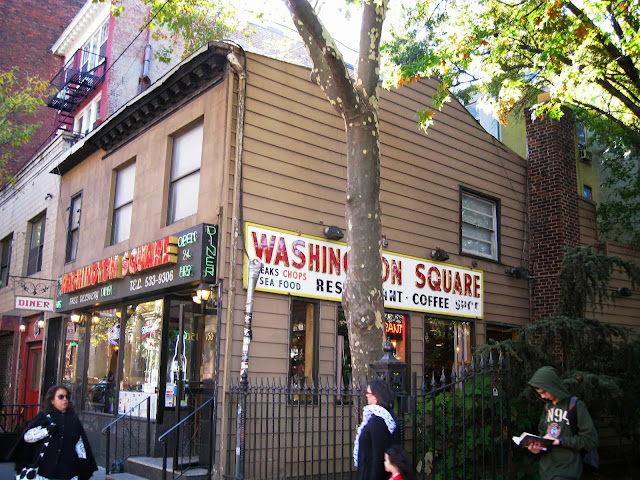 Today an attractive park nestles up to the venerable building.  A diner is housed on the first floor and stucco is slathered over the front facade.  The old cornice and ancient brick chimney survive on the building whose architectural lines still hint at its early beginnings.