The Painfully-Charming No. 21 West 11th Street 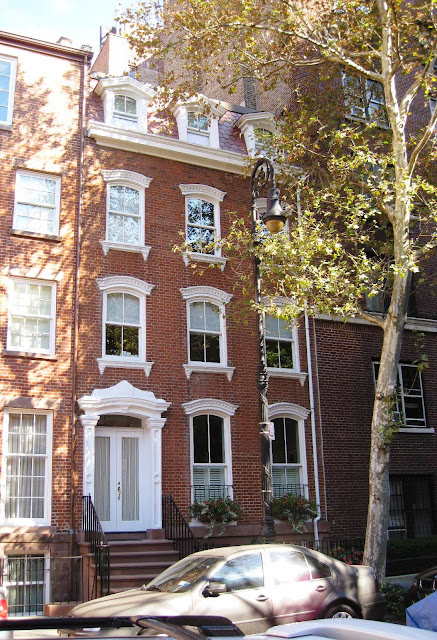 The delightfully charming house at No. 21 West 11th Street started out with less personality.  As the neighborhood experienced rapid development, physician Charles M. Graham commissioned the construction of an ambitious string of ten identical houses—stretching from No. 13 to No. 31.  The brick-clad homes were designed in an amalgamation of the familiar Federal style with the newly popular Greek Revival.


Two-and-a-half stories tall, their unassuming stone lintels and sills and modest proportions reflected the status of the merchant class families for whom they were intended.  As the block (and architectural styles) changed; so did the little house at No. 21.


At one point the dormered attic was raised to a full third floor.  A close inspection reveals the change from Flemish bond to running bond brickwork at the addition (the house next door, at No. 23, received the same alteration apparently simultaneously).   Then, sometime after the Civil War ended, the house received a flashy makeover.


The French Second Empire movement had swept Paris in the 1850s and 60s and now it arrived at No. 21 West 11th Street.  The somber openings with their flat brownstone trim were changed to segmental-arched windows with ornate, pressed lintels and bracketed sills.   A fourth floor was added in the form of a highly-fashionable slate-tiled mansard roof and the Greek Revival doorway was modernized with paneled pilasters and an extremely elaborate cornice.


At the turn of the last century it was home to Dr. John F. Russell.   He was not only a well-known physician, but Vice President and Director of the Standard Emulsion Company.    Russell came from the Richardson family on his mother’s side; one of the original Puritan families in New England.  His uncle, William Adams Richardson, served as Secretary of the Treasury under President Ulysses S. Grant.


Dr. Russell made a name for himself in his unorthodox treatment of tuberculosis.  The disease was a scourge of crowded cities in the early 20th century and Russell developed a homeopathic attack.  The New York Times noted in 1905 that he “has individual methods of treating tuberculosis and…has been particularly successful in curing the disease.  His treatment is a matter entirely of nutrition, and his effort is to cure patients in their own homes.”


The Russells had brought the doctor’s aging mother from Portsmouth, New Hampshire to live with them on West 11th Street.  Here, on January 20, 1906, the 91-year old Louise R. Russell died.


Within a few years boarders were being taken in at No. 21 West 11th Street.  Among them was a private secretary, Alice Johnson, and the disarmingly handsome John Townsend Miller.


Miller was 22 years old in 1911 and described by The New York Times as “a dapper youth.”  He was the son of John Francis Miller, former secretary of the Equitable Fire Insurance Company and grandson of John Miller, the former president of that firm.   The boy was sent off to Amherst College where he had joined a fraternity, Beta Theta Phi.   But on a visit to New York City, Miller was overtaken by the fast life and good times.


“I got the Broadway fever,” he later admitted, “I hit up a good pace and didn’t seem able to slow down.”  Miller funded his whirlwind of chorus girls and good times with money “from my mother, who had an independent fortune, I received a generous allowance up to a short time ago, when she heard of the gay times I was having and cut me off.”


After the boy pawned his expensive jewelry, piece by piece, he used his good looks to acquire other pawnable items.  “That was the beginning of my trouble,” he told police later.  “Mine all went after a while, and then I pawned a few things belonging to other folks.  It was very simple after having got the habit with my own stuff.”


One woman after another loaned Miller items of jewelry which he never returned.  His downfall began when he borrowed a gold watch and chain from Alice Johnson, valued at $100, in March 1910.  Unlike the other girls, after asking for her items back for over a year Alice went to the police.


On April 12, 1911 detectives saw Miller near Times Square.  They told reporters “he was unmistakable as he swung up Broadway, appareled in the latest Spring raiment, and carrying himself with a jaunty air,” according to The New York Times.


Miller was compliant and told police “Well, I’m glad it’s all over.”  Detectives reported he told them he was “bored by the attentions which he said a great many chorus girls and some few leading ladies insisted on showing him.”


According to The Sun he was held on $6,000 bail for not only pawning Alice Johnson’s watch and chain; but a $1,500 emerald and diamond ring from Dorothy Posner, daughter of banker Samuel Posner; smaller items from other women; and for numerous bad checks he had cashed.


Corrupt judges could be swayed by wealthy parents and the district attorneys found that a problem in this case.  Although he had pleaded guilty, when Miller’s case came up, Judge Rosalsky tossed it out saying “that Miller was not the notorious criminal persons said he was and that the District Attorney was not justified in asking for four indictments against him,” as reported in The Times on May 5, 1911.


District Attorney Delehanty then made additional charges and the matter was brought before Judge Mulqueen in General Sessions.  Mulqueen simply transferred the case back to Judge Rosalsky who suspended sentence.


Unfortunately for both judges, their blatant corruption went too far for the press, the public and the system to ignore.   Two weeks later they were both under investigation by the Bar Association. 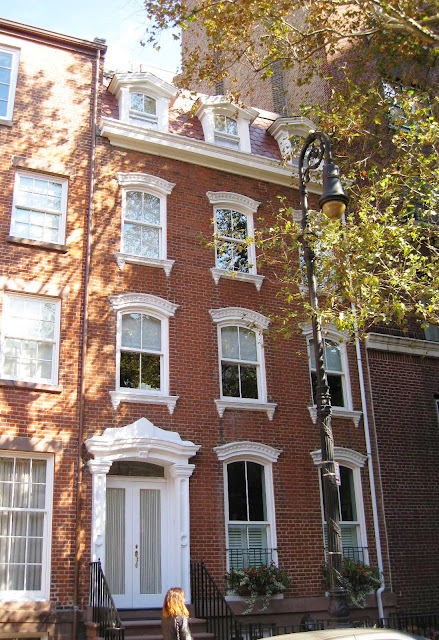 In 1921 the New-York Tribune reported on the sale of the house by Heloise de Forest Haynes to William B. Hale.  Within four years architect Adolf M. Martin was hired to renovate the structure, still described by the Department of Buildings as a “single family dwelling.”


After purchasing the house in 1933, Dr. Bernard H. Hannon did renovations of his own.  The New York Evening Post noted at the time of the sale that “the house will be occupied by Dr. Bernard H. Hannon as his office and residence.”  He commissioned architect S. Clements Horsley to install a doctor’s office in the basement.  Hannon would practice medicine from here for years.


Dr. Hannon’s name was on the distinguished passenger list of the Santa Paula in August 1940.  Other passengers included Beatrice Gainer, wife of the British Minister to Venezuela; Manual Sanchez, chief director of the Ministry of Foreign Affairs of Venezuela, and his wife; and Dr. Eduardo Calcano, director of the Venezuela Foreign Ministry.  The diplomats were all headed to New York on a vacation.


While on board Bernard Hannon would cross paths with Charleston, South Carolina residents Dr. and Mrs. Josiah E. Smith and their 17-year old daughter, Sarah.   While still five days away from port, Sara was struck with appendicitis.   Dr. Hannon performed an emergency operation at sea on the girl who, when she was removed to St. Vincent’s Hospital from the ship on August 15, was reportedly “progressing satisfactorily.”


The house became home to newlyweds Herman and Nina Schneider in the 1940s.  Here Nina created a writing room where she created poetry that was published in The Nation and started notes that would become her book “The Woman Who Lived in a Prologue.”    In 1959 the doctor’s office was eliminated, returning the house to a single family residence once again.


The Schneiders wrote educational books like the 1946 “Let’s Find Out a Picture Science Book” and “Quick Science: Science Experiments You Can Do in a Minute,” published in 1987.  In the meantime, Nina’s “The Woman Who Lived in a Prologue” was published in 1982.  It was deemed by Newsweek as “funny and harrowing, tender and tough, difficult, smart, ambitious, and fiercely alive.” Their remarkably quaint house remains a single family residence—a standout on a wonderful grab bag block of architecture and history.

photographs taken by the author
Posted by Tom Miller at 8:33 AM