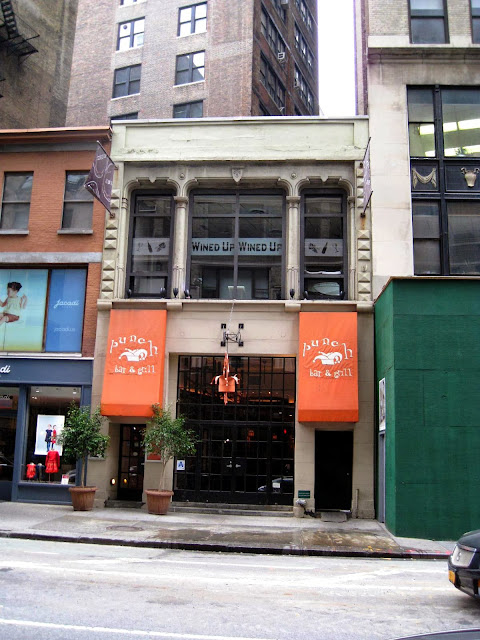 Brothers Peter and Robert Goelet were two of Manhattan’s wealthiest citizens in the second half of the 19th century.  As the refined residential stretch of Broadway between Union Square and Madison Square gradually turned commercial; the men purchased property being abandoned by wealthy residents moving northward.  By either razing or renovating the homes to business purposes, the Goelet brothers took advantage of the changes taking place and multiplied their wealth in the process.


Gilbert Coutant had a three-story residence constructed in 1838 at No. 913 Broadway.  A wealthy grocer and lumber merchant who was also known as a “Tammany fixer,” Coutant and his family would live in the house for only eight years.  In 1846 he sold the building to Peter Goelet.


Now the brothers waited for the appropriate time to improve their property.


Three decades later the time was right.  Nearly all the grand homes of this section of Broadway had been replaced or renovated as commercial buildings (except for, oddly enough, Peter Goelet’s own mansion on Broadway at 19th Street, just a block south of the Coutant home).  The brothers demolished the 36-year old house and commissioned architect Charles Wright to design an up-to-date mercantile building on the site.


Wright turned to the recently popular neo-Grec style in designing his building, using equally-popular cast iron for the façade.  A short flight of steps led from the sidewalk to the first floor.  Above it all an ambitious cornice with pointed finials announced the address in giant cast iron numbers.


Immediately upon the structure’s completion the haberdashery firm Union Adams & Co. took it over.  On November 23 the store opened, a block north of the elegant Lord & Taylor dry goods store.  Union Adams kept its original store at No. 637 Broadway opened through Christmas, offering customers the option of either venue for gift buying.

On December 11 The New York Times opined that “At no previous Christmas season have the thousands of patrons of Union Adams & Co. had such an excellent opportunity of making their purchases, for Mr. Adams has very recently opened his new store, at No. 913 Broadway, between Twentieth and Twenty-first streets, with the finest stock of gentlemen’s furnishing goods ever yet exhibited in the City, and the old, well-known store at No. 637 Broadway is still in its pristine glory, and will remain open until after the holidays.  Then Mr. Adams will remove all his immense stock of wholesale and retail goods to his future business house at No. 913 Broadway, on what is known as ‘The Ladies’ Half-mile.”


The article praised Adams’ taste in robes and smoking jackets, focusing on those “made of cashmere, heavily embroidered with silk, in a variety of patterns in the Indian style.”  Shoppers could browse among driving mufflers, scarves and neckties, silk handkerchiefs (“now so much used”), hosiery, shirts, gloves, canes, umbrellas, walking sticks and American and French jewelry.


Calling the store’s stock of hosiery the “foremost in this department,” The Times writer turned to the shirts.  “The same may be said of the shirt and embroidered shirt bosom department, which has all the marvels of the fine needle-work of the nuns of France and Italy.”  The gentleman patron could choose among a wide variety of gloves:  “kid, castor, buckskin, reindeer, seal, bear, of even kangaroo skin.”


Despite the newspaper’s glowing reviews of Union Adams & Co., the store lasted only two years in its new home.  In 1876 McGibbon & Co. moved in.  Founded in 1866, the firm imported linens and upholstery goods from European manufacturers.  New York’s Leading Industries remarked that at No. 913 Broadway, “they carry what is without doubt one of the largest and best selected stock of goods of their line in the city.  It comprises linen and cotton shirtings, pillow-case linens, linen sheetings of all widths, table damasks, bleached and unbleached, table cloths in every size, napkins, doylies, towels, embroidered sheets and shams, quilts, cotton and silk comfortable, blankets, handkerchiefs, etc.”


Among the five floors of fabrics were upholstery goods, as well.  “In upholstery their stock is equally complete, comprising worsted and silk coverings, woven jute fabrics, mohair, and all silk plush, all the fashionable tapestry and Turcoman curtains, raw silk portiers, etc., etc.  Their stock of lace curtains is complete, also table covers and shade materials in full and fresh assortments.”


For those households lacking a seamstress, the firm would custom-make linen items and embroider them to order.


McGibbons & Co. employed 75 people and was deemed by Illustrated New York: the Metropolis of To-Day in 1888 to be “the only exclusive Linen and Upholstery house in the United States, and has a national reputation.”


The renowned quality of McGibbons goods was enough to cause Anna Beach Appleton to hatch a scheme in 1894.  She was living in the home of two sisters, Mrs. McDonald and Miss Maynard, at No. 172 East 74th Street.  Realizing that she was unable to come up with the money for her board, she visited McGibbons & Co.   Anna chose a pile of linens valued at $39, then casually mentioned to the clerk that she was the sister of ex-Judge Beach.


With so reputable a brother, she was allowed to walk out of the store with her expensive goods (the $39 worth of linens would equal about $1000 today).  Anna went home, paid off her board bill with crisp new linens, and everyone was happy.  Until McGibbons & Co. looked for its payment.


On January 24, 1894 Mrs. Anna Beach Appleton found herself in the Jefferson Market Police Court on the charge of obtaining goods on false pretenses.  Her landladies were in court, as well, to testify about the linens-for-board swap she had concocted.


“Justice Ryan then ordered the women to return the linen to McGibbon & Co.,” reported The Times.


As it turned out, McGibbon & Co. was the least damaged in Anna Appleton’s charade.  “Mrs. Apppleton is also charged with obtaining on false pretenses $70 worth of goods from Adams & Co. and $300 worth from Stern Brothers,” said the newspaper.


New York is a city of change and by 1896 the grand emporiums of Broadway were already beginning to inch further towards Midtown.  That year McGibbon & Co. opened its second store at No. 9 West 42nd Street in the fashionable area of mansions and high-end shops.  An advertisement advised shoppers “The latter place will be found very convenient to ladies residing up town or out of town.”


It was the first hint that McGibbon & Co. was considering leaving its Broadway building.  Then, on January 10, 1898 the New-York Tribune ran an advertisement that announced “Our Removal Sale” that “embraces other goods than Linens, which have been well received by customers.”


By August of 1899 McGibbon & Co. was gone.  Louis Cohen & Co., manufacturers and retail furriers, took the second floor; which, said the Fur Trade Review, “they have attractively fitted and furnished, for the greater convenience of their retail department.”


The following month New York society was preparing for the fashionable Horse Show.  Louise Cohen & Co. advertised “An exceptional line especially gotten up for the coming event in very smart effects.”  The ad listed “Smart coats in Broadtail, Persian Lamb and Seal, Plain and with combinations of Chinchilla, Rusisan and Hudson Bay Sable.  Plain coats from $120.00 upward, with combinations from $165.00 upward.”


Peter Goelet had died in 1879, leaving No. 913 Broadway to his sister, Hannah Goelet Gerry.  In 1890 she had the building updated—removing the stairs and installing a more modern storefront at street level.

By 1902 the high-end millinery importer Florette was also in the building.  The firm also had a Paris shop and offered stylish headwear to Manhattan’s carriage trade.  In offering “model hats, tailored hats and bonnets” in The Illustrated Milliner in 1902, Florette promised that “individuality will predominate.”


Sharing the building with the other upscale tenants was the Frederick Jewelry Company.


The high-end retailers would remain in the building for several years.  But by the time of the Great Depression the exclusive shops had all moved up Fifth Avenue.  In 1932 No. 913 was purchased for $30,000—although it was assessed that year for $82,000.  The new owners had a startling renovation in mind.

Two years later, on November 23, 1934, Charles F. Noyes announced that he had leased the building to gift and novelties merchants Rubenstein Merchandise Company.  But there would be changes made.  "The property at present consists of a five-story which will be made over into a two-story structure," reported The Times.

Noyes hired architect William F. Staab to alter the building.  The top three floors were chopped off, resulting in a stubby two-story structure with little evidence of the original cast iron emporium.  Staab installed a single-paneled parapet to cap the renovated building and modernized the sidewalk level. 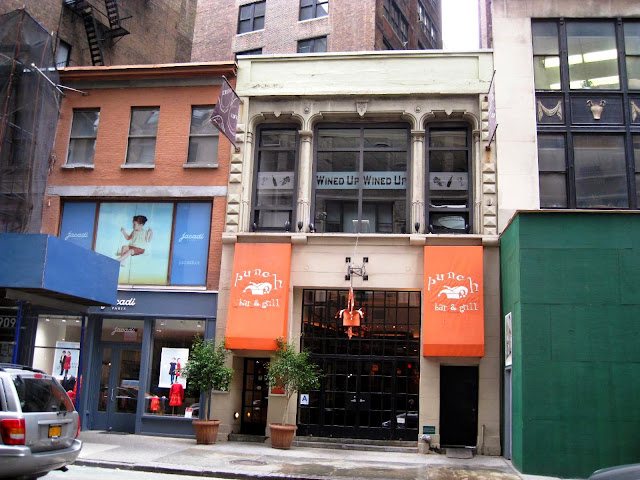 In the 1940s it was home to the Northern Straw Works, Inc.; manufacturers of “hats.”


By the mid-1980s the neighborhood was reviving and in 1986 the former retail space became a restaurant, Indian Oven II; the first in a series of restaurants.  Before the century’s end it would house Bar Zil, then in 1997 Theodore, a restaurant named for Theodore Roosevelt.


The first floor is still a restaurant today.  At this level any trace of Wright’s emporium where wealthy gentlemen purchased reindeer gloves and later well-dressed women shopped for French linens has long ago disappeared.  But above, somewhat miraculously, the 19th century lives on where the cast iron façade survives nearly unblemished.

non-historic photos taken by the author
Posted by Tom Miller at 3:03 AM