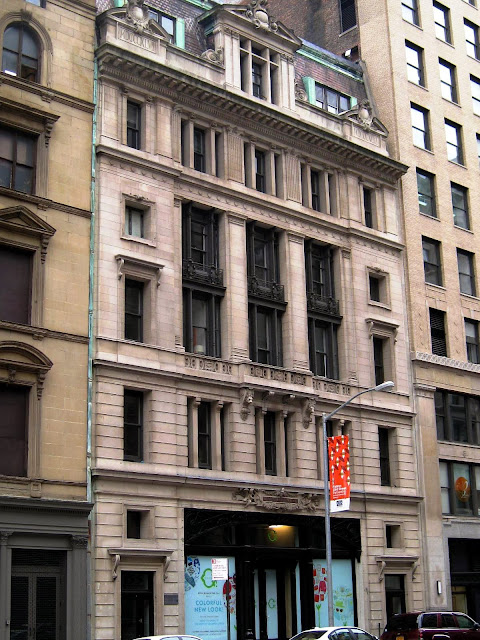 1846 was at a time when quiet evenings were spent with a bound book and one’s level of sophistication could be measured by his personal library.  That year Charles Scribner and Isaac D. Baker formed the publishing firm “Baker & Scribner” which, after Baker’s death, became Charles Scribner Company.

Charles Scribner, Sr., had died in 1871 but his firm, now known as Charles Scribner’s Sons, continued its distinguished reputation as a publisher of theological, historical and philosophical books.  Scribner’s published the first American edition of the Encyclopedia Britannica, started a subscriptions department, and expanded into magazine publishing with highly popular periodicals like Scribner’s Monthly, Century Magazine, and the children’s St. Nicholas Magazine.

The firm purchased the Glenham Hotel on Fifth Avenue between 21st and 22nd Streets for about $250,000 (approximately $5.5 million today).  The New York Times announced on August 3, 1893 that “an office building will be erected on the site.”

The “office building” would be designed by the well-respected architect Ernest Flagg.  At the time social reform was gaining steam; and Flagg was already recognized for his concern with adequate light and ventilation, sanitary conditions and zoning laws regulating the height of buildings and setbacks.  The architect was a major proponent of the Beaux Arts style, and the new Scribner’s Sons Building would be a fine example.

Flagg looked to France for inspiration, as evidenced in the similarities between Edmond Guillaume’s 1880 Maison Commerciale at 3 rue d’Uzes and Flagg's designs for Scribner’s.  His resultant limestone-clad structure, completed in 1894, rose six stories to a mansard roof.  An elegant glass marquee sheltered patrons arriving at the first floor retail space.  Below ground was the packing department, offices took up the second floor, and the upper floors housed the subscription-book, surplus stock, magazine and mailing departments.

Ernest Flagg’s minute attention to the functional aspects of his designs extended to the bookshelves in the new building.  The New York Times noted that “at the suggestion of Ernest Flagg, the architect, they had their entire store…refitted with glass shelves.  Mr. Flagg originated the idea, having observed that wood and iron shelving, whether smooth or covered with cloth, had the effect of wearing the bindings of books.”

The heavy, pricey shelves were custom-made in France in two sizes and thicknesses—the larger being three-quarters of an inch and the smaller half an inch thick with rounded edges.  “This glass for one thing is perfectly inflexible,” explained the newspaper, “which gives it an advantage over wood.  Its strength also has been abundantly proved.  It is not only more cleanly looking than anything else in the way of shelving, but it in fact easier to keep clean.”

The Times said “The Messrs. Scribner are enthusiastic in praise of glass shelving, and all who examine it are impressed with it value in the preservation of books.”

By May 25, 1894 the move into the new building, deemed by The Times as “built of white limestone and graceful with classic simplicity,” was nearly completed.  Over 300,000 volumes had been carefully packed and moved over a period of a month.  The newspaper was astounded that there had been no damage to the inventory.  “Of all the delicately beautiful volumes which were transferred from the old building to the new—missals, books of hours, incunabula, bindings of the old masters, and of Cobden-Sanderson, new editions in covers fresh as the lilacs o May—not one was even imperceptibly damaged.  Not one!”

The Times estimated the cost of the new building by using the taxes and interest on the property as a guide.  It arrived at a figure of “more than $500,000.”

Scribner’s Sons was not the only large publishing house and bookstore to move that year.  Dodd, Mead & Co. established itself right next door at the corner of Fifth Avenue and 21st Street, and D. Appleton & Co. moved into its new building at Fifth Avenue and 13th Street.  A journalist noted in December 1894 that “The growing literary taste of the public is being shown by the publishers who are moving into enlarged quarters to meet the demands of their customers.”

The writer made note of Scribner’s retail area.  “Inside the new building of Charles Scribner’s Sons there is the appearance of a large public library, with a wonderful collection of books, fresh and new, and in beautiful bindings of many kinds.  Book shelves run up into a second story, and in the rear there is a top light of glass so large that there is not a dim nook or corner to be found.”

Scribner’s was fortunate to have published The Sherman Letters that year—a 50-year compilation of correspondence between brothers General William Tecumseh Sherman and Senator John Sherman dating from 1837 to 1891.  The firm also published Frances Hodgson Burnett’s newest children’s book Piccino that year; the latest in a series that included the popular Little Lord Fauntleroy.

Meticulous in its choice of authors, Scribner would introduce and represent over the years Edith Wharton, Henry James, Robert Louis Stevenson, Rudyard Kipling and George Santayana among many others.

Scribner’s Sons tradition of uptown moves continued.  After just two decades in its handsome headquarters, the firm called back Ernest Flagg to design another, larger, office building and bookstore further uptown in 1913.

The Scribner family retained ownership of the old property, however.  In January 1934 it leased the building to the 153 Fifth Avenue Corporation which announced plans to remodel “with stores on the first floor and lofts above, at a cost of about $40,000.”  Architect Arthur Weiser made the renovations and it was possibly at this time that the marvelous glass marquee was removed.

The store level was modernized again in 1969; yet the beautiful French detailing of Ernest Flagg was mostly preserved.  By now the Scribner family no longer owned the building, having sold it in 1951.

In 1973 the United Synagogue of America purchased the former bookstore/publishing building.  Organized the same year that Scribner left the building—in 1913—its goal was to establish a middle-ground between the Reform and Orthodox communities. The group dubbed the building "Rapaport House."

The organization of 700 affiliated congregations used the building until 2007 when it was sold to Philips International Holding Corp. for $26.5 million.  A year later the company resold it to the Eretz Group for $38 million.

Ernest Flagg’s handsome and restrained Beaux Arts building survives essentially intact—a reminder of a time when publishing houses populated Fifth Avenue south of 23rd Street, and when families settled in at night with a book.

photographs taken by the author
Posted by Tom Miller at 2:19 AM