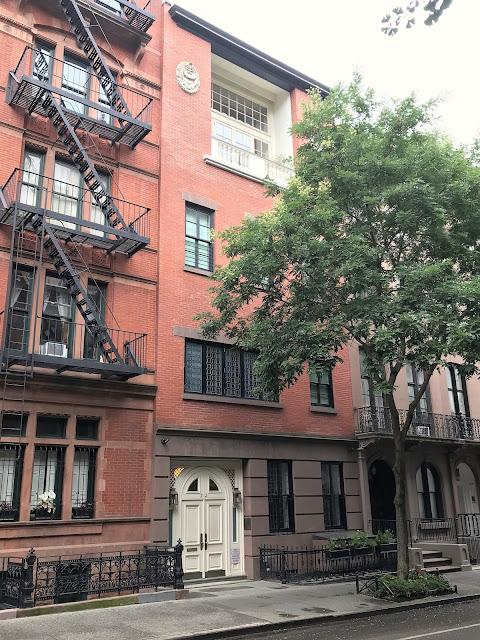 Wealthy physician Austin Sherman completed construction of his Greenwich Village home at 13 Ninth Street (renumbered 52 West 9th Street in 1868) in 1848.  The double-doored entrance of the Anglo-Italianate style residence was entered at street level within a rusticated brownstone base.  The two upper stories were faced in red brick and trimmed in brownstone.  In the rear yard, as was common, was a small, tw0-story house.
Austin was well-known for his patented medicine, "All Healing Balsam."  In addition to his medical practice, Austin dabbled in real estate.  In May 1851, for instance, he advertised: "To Let--A first class three-story and attic House with all the modern improvements and conveniences, pleasantly situated, 43 Ninth street.  Apply to A. Sherman, 13 Ninth street."
Dr. Austin was stricken with paralysis, according to the Weekly Drug News, in 1871, most likely the result  of a stroke.  He died 13 years later, on November 22, 1884.
The house would be home to three families by the turn of the century.  John A. Stevens was here by 1887, followed by the Charles E. Griswold family.  On March 27, 1891 The Epoch reported, "Mrs. Charles E. Griswold and Miss Gertrude Griswold gave an exceptionally pleasant musicale on the night of Wednesday, March 25th, at their residence, 52 West 9th street.  They will receive informally on the second, third and fourth Mondays of April."
Finally, William Cornelius Hall moved his family in.  He and his wife, Marie Suzette de Mirigny Thomas, had married in 1880.  Their first son, William Claiborne, was born in 1881, followed by John Mandelville the following year, and by twins Agnes Stuart and Marie Suzette de Marigny in 1886.
A graduate of Yale University, Hall was a vice-president of the Perth Amboy Terra Cotta company, perhaps best known for making the Tiffany bricks, designed by architect Stanford White.  Marie Suzette was related to the Marquis de Marigny, the Duc de Villinbrosa, and to Baron Louis von Hoffmann of Germany.  Her grandfather was the first governor of New Orleans.
Upon his graduation from Yale in 1904, William Claiborne Hall took a ground-level job in his father's firm, earning $5 per week (about $160 today).  A year later he was promoted to the sales department.
Marie Suzette's wedding to Charles Schuveldt Dewey on December 20, 1905 was a socially important affair.  Three days earlier The Sun had reported that pre-wedding entertainments had been going on for two weeks.  It added, "To-morrow night Chauncey Dewey of Chicago, a cousin of the bridegroom and a nephew of Admiral Dewey, will give a dinner dance for the bridal party at the Waldof-Astoria.  The final ante-nuptial affair will be a dance given on Tuesday night by the bride's aunt, Mrs. Gilbert Colgate."
According to the New York Herald, Marie wore the wedding gown of her great-grandmother, "who was a lady in waiting to the then Queen of Spain."  The Church of the Ascension filled with some of Manhattan's most elite families, with names like Havemeyer, Schuyler, Roosevelt, Colgate and Hall.  Following the ceremony, a reception was held in the West 9th Street house, which the New York Herald said, "is one of the old fashioned houses that has undergone few changes." 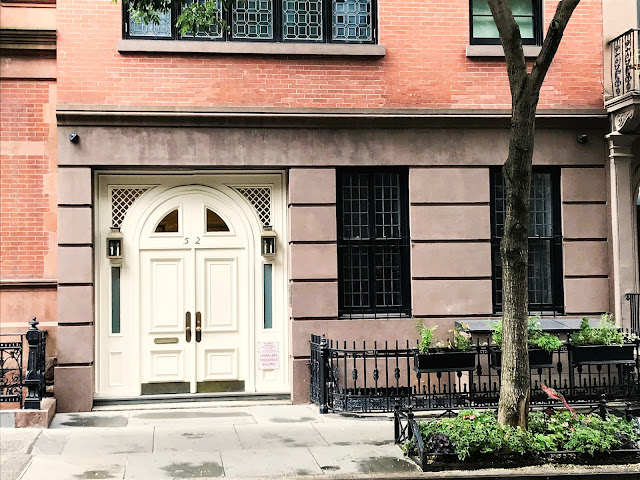 Despite a privileged upbringing identical to his brother William, John Mandeville Hall (who went by his middle name) became the black sheep of the family.  He was seemingly unable to keep his name out of the newspapers for the worst of reasons.   It started on June 12, 1906 when the Perth Amboy Evening News began an article saying, "Mystery surrounds the sending out of a card bearing the Hall coat-of-arms and reading as follows":

The engagement of Lily F. Wilson, of New Rochelle, daughter of Mrs. George Grant Wilson, and Mr. Mandeville de Marigny Hall, of New York, has been broken by mutual consent. 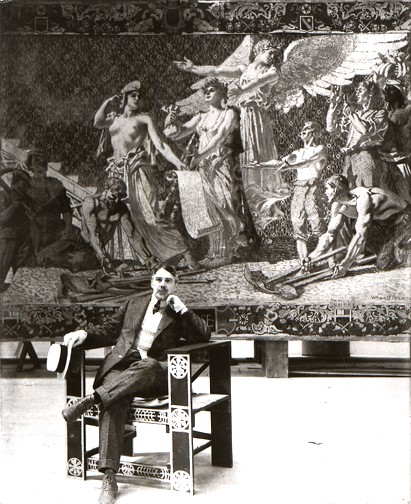 Dodge poses in front of The Purchase, one of six murals for the Tower of Jewels at the 1915 Panama-Pacific Exposition in San Francisco.  Original source unknown.
The "improvements" Dodge made to the West 9th Street house were transformative.  Essentially, only the ground and third floors gave hint of the home's 1848 appearance.  A five-paneled set of leaded casements was the feature of the second floor, and a double-height studio was installed at the former attic level.  Unlike most studio windows in converted vintage homes at the time, this one was recessed, providing an ample balustraded balcony.  On either side were complex terra cotta medallions, possibly designed by Dodge. 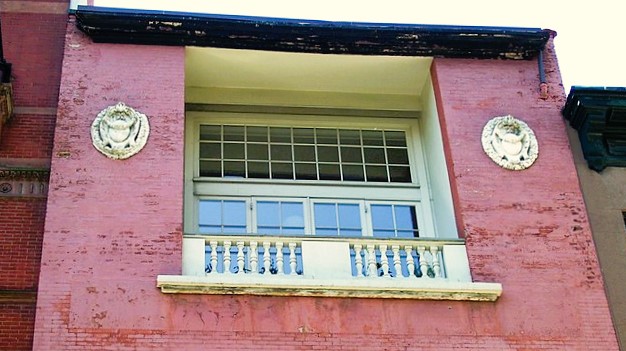 The balcony and medallions in 2011, prior to a restoration of the facade.  photo by Beyond My Ken.
By the time the Dodges moved into their remodeled house, William was a professor at the Arts Students League of New York.  He and his wife, the former Francesca (known as Fanny) Theodora Bland Pryor, had a daughter, Sara, and a son, Roger.  The family's summer home was in Setauket, Long Island.
On March 26, 1935, The New York Sun reported, "William De Leftwich Dodge, one of America's leading mural painters, whose panels form part of the decoration of many public buildings in this country and abroad, died yesterday after an illness of some months.  He was 68 years old."  Despite his international prominence, Dodge's funeral was private, held in the West 9th Street house the following afternoon. The New York Sun revealed what was perhaps a little known detail in the artist's resume.  "The helicopter which Mr. Dodge made and flew for ten feet before the Wright brothers' flight in 1903 is now on exhibition in the Smithsonian Institution in Washington."
Dodge's renovations to 52 West 9th Street were perfect for artist Hans Hoffmann, and the following year the Hans Hoffman School of Fine Arts moved in.  Born in Weissenberg, Germany, Hoffmann grew up in Munich where he studied architecture before turning to painting.   In 1934 he had opened a summer school in the artist colony of Provincetown, Massachusetts, then a year-round school at 137 East 57th Street before moving to the former Dodge house.  The school remained here through 1938.
A renovation completed in 1948 resulted in a duplex on the ground and second floor, and one apartment each on the upper floors.  In May 2016 the duplex was purchased by Craig Newmark (founder of Craig's List) and his wife Eileen as their Manhattan pied-à-terre.  They paid $5.9 million for the three-bedroom, 3-1/2 bath home. 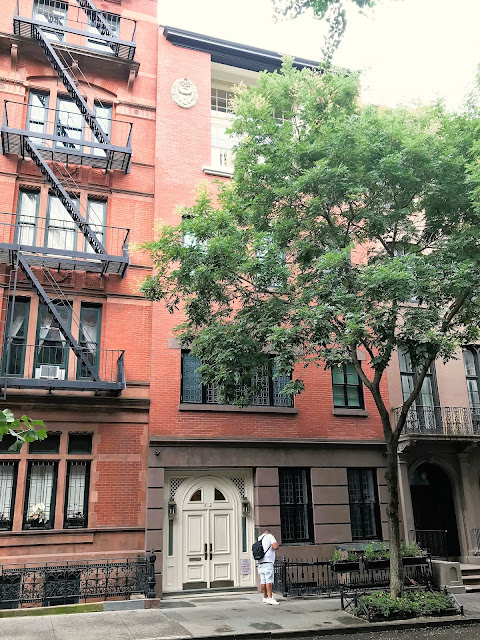 With the facade sensitively restored, the house looks remarkably as it did when William de Leftwich Dodge made his overwhelming 1921 "improvements."
photograph by the author
no permission to reuse the content of this blog has been granted to LaptrinhX.com
Posted by Tom Miller at 1:00 AM