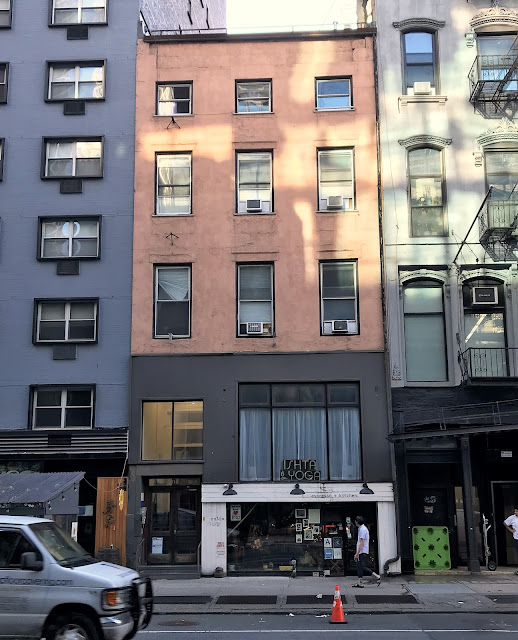 The area of Broadway around 10th Street was filled with elegant brick- and stone-faced homes when Grace Church was completed in 1846.  Merchant Thomas T. Sturges and his family lived at 816 Broadway, a three-and-a-half story Greek Revival house.  But change was rapidly coming.
By the time the well-respected Sturges became a member of the New-York Historical Society in 1852, the ground floor of his residence had been converted for business for at least two years.  In 1850 it held the grocery and butcher shop of James Morgan and George W. Marsh.
Despite having a business in the ground floor, Sturges remained in the house through 1862.  It had been given an insurance valuation the previous year of $35,000--just over $1 million in today's money.
Dr. J. E. Von Eisenberg followed the Sturges family in the upper portion.   On September 19, 1863, he took out a full-page advertisement in the New-York Daily Tribune with the ponderous title, "Surgical and Practical Observations on the Diseases of the Ear, with the New Mode of Treating Deafness, to Which is Added an Appendix, Containing a Treatise on Catarrh and the New System of Treating It."  An ad in The New York Times the following year promised that Von Eisenberg could cure "deafness, impaired sight, noises in the head, catarrhal affections in the throat, chronic catarrh, catarrh of the tympanic mucous membrane, obstruction of the eustachian tube," and guaranteed "cross-eye straightened in one minute."
On April 1, 1866 the New York Dispatch ran the headline, "A Sad Disaster," and reported, "About 8 o'clock on Wednesday evening, the building occupied by Dr. Von Eisenberg, No. 816 Broadway, was discovered to be on fire.  The alarm was given, but notwithstanding the exertions of the firemen, the flames soon enveloped the building, and the interior was badly damaged."
The article placed the value of the lost furniture at $200,000--more than $3.5 million today.  It said that two tin boxes containing an equal amount of Government bonds were saved.  The doctor was stalwart in the face of the disaster.  "To a less energetic man than Dr. Von Eisenberg, such an occurrence would have been ruin, but the Dr. has already commenced the practice of his specialty at the old place, No. 816 Broadway, determined that even the elements shall not deprive sufferers from Eye and Ear Diseases of his assistance."
Nevertheless, Von Eisenberg had moved on by 1869, when the former home was completely converted for business.  It became home to M. M. Johnston & Co., operated by Wilbur Fisk Johnston and Melville Morton Johnston, both of whom had graduated from Wesleyan University in Middletown, Connecticut.  The firm manufactured the gold foil necessary for dental fillings. 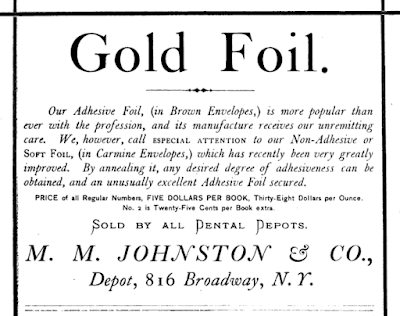 American Journal of Dental Science, June 1870 (copyright expired)
Other tenants in the building in the 1870's were S. T. Taylor's dressmaking shop, shoemakers E. J. Thierry, and the A. F. Marks Chair Company.   An advertisement for Marks' "Improved Adjustable Folding Chair" in January 1879 called it, "a parlor, library, smoking, invalid or reclining chair, lounge, bed, and child's crib combined in one." 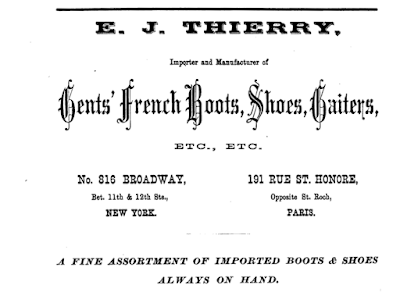 New-York, Its Past and Present, 1874 (copyright expired)
Merchant tailor J. H. Miller was in the building by 1901 and would remain at least a decade.  And while other apparel firms, like the Truefit Raincoat Company, would lease space prior to World War I, a change in the type of tenant was happening.
F. W. Engels, here in 1913, imported German novelties, like a leather-cased manicuring set and the Hansel and Gretel "Fairy Weather Indicator" available that year.  (The latter was a German-style cottage with a thermometer and carved figures of Hansel and Gretel and a witch, which would emerge from separate doorways when the weather changed.)  Around the same time, Berk Bros., electrical dealers and contractors moved in. 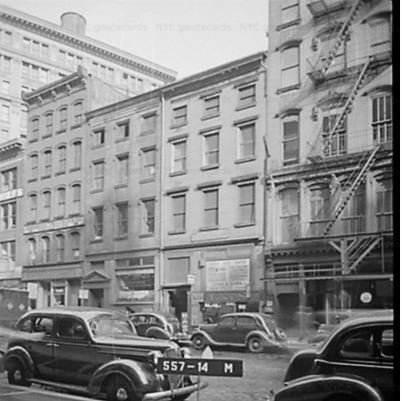 In 1941 the once-identical house next door, at 818 Broadway, still retained its square-headed lintels.  via the Dept. of Records & Information Services.
Small businesses continued to operate from the building throughout the succeeding decades--the Purvin Typewriter Exchange, the Eastman Machine Co., and the Hudson Milling Co. in the 1920's, for instance.  By the second half of the 20th century, 816 Broadway was the last hint of the refined residential block of the early 19th century. 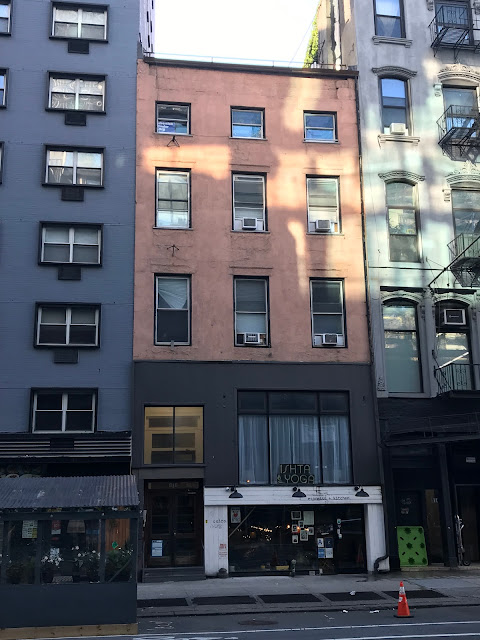 Today the venerable building is sadly abused.  A patchwork storefront covers the lower two floors and a stucco-like substance shrouds the upper facade.  And yet, the domestic appearance of the building survives after more than 170 years.
photographs by the author
no permission to reuse the content of this blog has been granted to LaptrinhX.com
Posted by Tom Miller at 1:00 AM