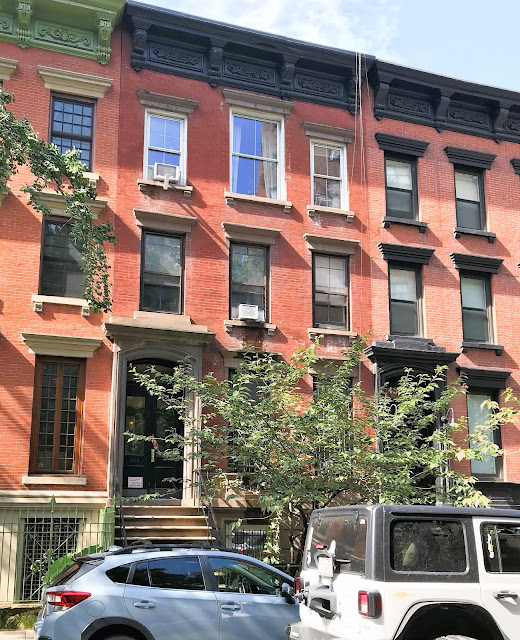 photograph by the author
In 1860 a row of handsome Italianate style homes was erected on the south side of West 25th Street, between Ninth and Tenth Avenues.  The 20-foot wide brick-faced residences reflected the latest in domestic taste--with high stone stoops, substantial Italianate cast iron fencing, and paneled and bracketed cornices.  One house, 454 West 25th Street, stood out among the row with its oversized center window on the top floor.  It was apparently a specification of the purchaser during construction.
That buyer was 43-year-old John Russell, who owned a stonecutting business on West 30th Street near the Hudson River.  He and his wife Helen had nine children.  Despite what must have been somewhat tight conditions, they took in a boarder.  They would have to find a replacement in 1865 when C. P. Byron was drafted into the Union Army.
By 1865 the Russell's eldest daughter, Helen, was a teacher.  She divided her day between two relatively nearby schools--P.S. No. 55 on 20th Street between Sixth and Seventh Avenues, and P.S. No. 19 at 223 West 18th Street.
Around 1868 Russell moved his stone operation to the foot of West 51st Street and the Hudson River.  By now, the population of 454 West 20th Street had increased by one following Helen's marriage to Alexander Orr Hopkins, a boat pilot.
In 1876, Janet Russell, who was just five years old when the family moved into the West 25th Street house, became a teacher like her sister.  She taught in the primary department of Grammar School 546 on West 18th Street.  Her brothers, John Jr. and Robert, were both listed as masons, working in their father's business.
Sadly, that same year, on April 13, Helen died at the age of 31.  Her funeral was held in the parlor two days later.  Her husband moved out of the Russell house the following year.  The Russells once again took in a boarder.  Edwin Connor, who ran a coal business on West 29th Street, lived with the family in 1879 and 1880.
John Russell died in the house on March 20, 1881 at the age of 64.  His funeral was not held in the family residence, but rather far to the north, in the Church of Our Saviour on West 57th Street near Eighth Avenue.  His children inherited the West 25th Street house in equal portions. 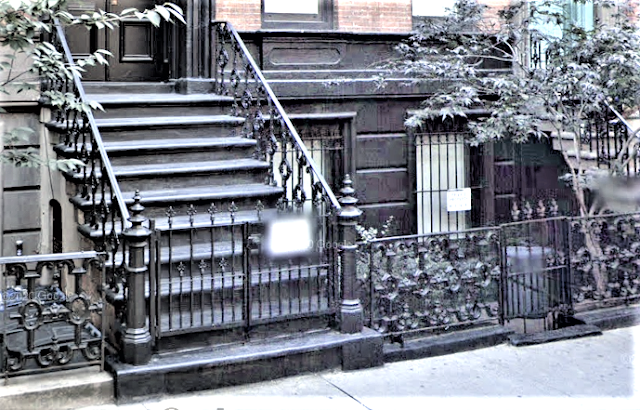 The ornate Italianate style ironwork survives along the row.  photograph by the author
Alice R. Russell, who had married James P. Clark, sold her interest in the house to John Russell Jr. in 1887 for the equivalent of $22,o00 today.  By the mid-1890's 454 West 25th Street was occupied by what appears to be a different Clark family.  Patrick J. Clark operated a "three-story brick hotel" nearby on the northeast corner of Ninth Avenue and 25th Street.
He and his wife, Sarah Coleman, had a daughter, Mary, and five sons, Joseph, James, Philip, Eugene, and John Joseph.  Joseph attended P.S. No. 17 on West 20th Street in 1901.  On June 27, the day before his graduation, the 11-year-old was running home from school when, as reported by The New York Times, "he fell in front of a horse car at Twenty-fifth Street and Ninth Avenue and was instantly killed.  The front wheel of the car passed over the boy's abdomen."
Joseph's brothers were significantly older.  In 1909 James P. Clark was made a commissioner of deeds, a civic position similar to today's notary public, and John Joseph Clark was the proprietor of Clark's Café on Columbus Avenue and 62nd Street.    John Joseph died at the age of 30 on January 5, 1915.
Not long afterward, 454 West 25th Street was being operated as a rooming house.  War was intensifying in Europe at the time and the conflict would deeply affect three families living here.
John J. Flood held a job which today would qualify him as an "essential worker" and which qualified him as except from the draft.  But on August 10, 1917, the New York Herald listed him on "the honor roll of the national army" after he waived him exemption.
Two other residents joined the army, Edward P. Lynch and Joseph E. Nash.   Lynch enlisted with the 69th Regiment and was sent to Europe in October 1917.  Joining around the same time were his cousins, with whom he had grown up.  Nine months later, his widowed mother, Mary Lynch, received the news every mother feared.  On July 15, 1918 Edward was killed in action.  The New-York Tribune noted, "The corporal was Mrs. Lynch's only son, but she has two nephews, the sons of her sister, whom she has raised and who are at the front."
Mary E. Nash also received frightening news from Government.  Lt. Joseph E. Nash was "wounded severely" in April 1919, but happily he survived to return home to 454 West 25th Street.  Over the next few years his name would appear in newspapers for less heroic reasons.
In 1921 Irish-American newspaper The New York Age reported on the trials in Belfast, Ireland, of court-martialed Irish soldiers.  Virginia-born Ed Cahill had been stopped while bicycling and searched.  "Four envelopes were found in his possession.  One was addressed to "Jos. Nash 454 West 25th street, New York, containing seditious matter re affairs of Ireland," said the article."  In Cahill's room were found the floorplans of a police barracks, the plans for blowing up a bridge, and a notebook about the Irish Republican Army.  Cahill was sentenced to "five years' penal servitude."
Nash was still rooming at 454 West 25th Street on June 19, 1922 when he was pulled over by Patrolman D. J. Mullen for "failing to observe the eight-foot law."  (The law required motorists to stop no closer than eight feet from a stopped street cars and buses.)  Because this was Nash's second offense, he was fined $25--a hefty $400 by today's standards.
The house continued to be operated as a rooming house for years.  Mary Ellen Laritz and her adult son lived here in 1943 when she witnessed a horrifying accident from her window on August 24.  Directly across the street was the U.S. Coast Guard Chelsea Encampment.  She later testified before a Congressional hearing that at 7:00 that evening, "I was looking out of my front-room window, which faces the property now occupied by the Coast Guard."  She said that several children were running up and down the sidewalk playing, and a Coast Guard supply truck was on the sidewalk, fueling trucks parked along the curb.  The truck moved slowly up the block from one truck to another.
Mary Laritz recalled, "I suddenly heard screams from these several children, and saw several of them running back along the sidewalk, but I did not see the little light-haired boy.  I saw coast guardsmen and others running toward this oil truck which was at a standstill on the sidewalk."  The reason Mary Laritz could no longer see five-year-old William Mooney was because the supply truck had run over his leg.  The driver of the truck said the children had made a game of riding on the running board of the truck, and Mooney had slipped under.  Mary said, however, "The injured boy was not in the roadway at any time I saw him and was not hitching on any truck at the time I saw him."
William Mooney suffered a fracture of his right femur, multiple abrasions and a laceration of the groin.  He spent two months in St. Vincent's Hospital.  Mary testified on January 22, 1944, "This oil truck and others were always running along the sidewalk, but since this accident, they do not run on the sidewalk anymore." 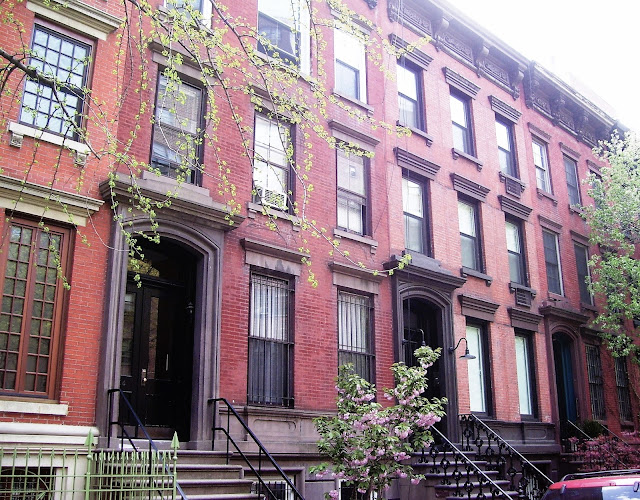 photograph by Beyond My Ken
A renovation completed in 1965 resulted in five apartments within the house.  A subsequent remodeling in 1992 combined the parlor and second floor into a duplex.
LaptrinhX.com has no authorization to reuse the content of this blog
Posted by Tom Miller at 1:00 AM