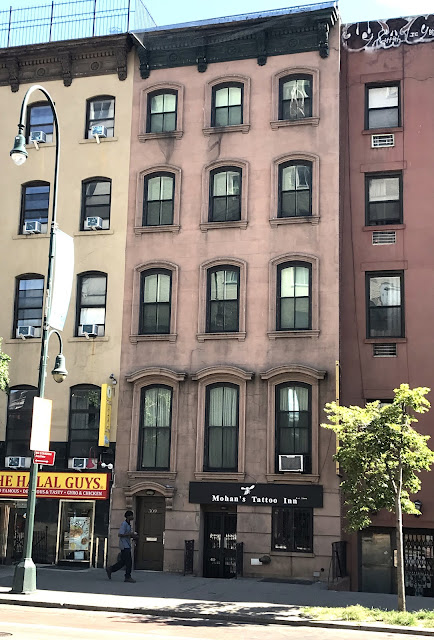 ...it is related that living among his heirs is an illegitimate child, Mabel Hazelton, the nine-year-old daughter of an actress, residing at No. 309 East Fourteenth street, for whom no provision is made in the testament.  It is stated, however, that shortly Jack's death he told his brother of the existence of the girl and asked that when he died he take the child and bring her up as one of his own children.

Among the boarders in 1904 were the Gray and the Hartmann families.  Jacob Hartmann and his wife, Mary, and four children, Margaret (who went by Margery), Clara, Jacob Jr., and Mary.  On the morning of Wednesday, June 15, 1904 13-year-old George Gray and two friends joined the members of St. Mark's Evangelical Lutheran Church at 323 East 6th Street near 2nd Avenue on their 17th annual summer outing.  Also attending were Mary, Margery, and Clara Hartmann.
For $350 the church group had chartered the 235-foot steam sidewheeler The General Slocum for a day trip up the East River and across the Long Island Sound to a picnic grove on Long Island.   Later George Gray would recount, "The boat was just passing out of Hell Gate and going toward an island, when I smelled fire.  I said to Otto and Albert, 'Hey, boys, there's a fire,' and we jumped up on a seat and tried to pull down some life-preservers."
The preservers would not help.  Most fell apart in the passengers' hands, the canvas fabric having rotted after years of exposure to the elements.  The cork filling in the rest of the life vests had granulated over time, so when mothers  laced their children into the vests and tossed them overboard, they watched in utter horror as the cork absorbed the water and pulled their children under.  Within 15 minutes the General Slocum was burned to the waterline and of the 1,300 people on board, only 321 survived.
Mary Hartmann and her daughters jumped into the river.  Clara later said, "But the moment we got into the water we had to let go of each other to do what we could for ourselves.  Seeming Mamma and Margery struggling nearby, I tried to save them, for they were struggling awfully.  Then a lot of swimmers got around us and we were separated.  I heard Margery say again 'God save us' then she gave a gasp and sank out of sight.  Mamma I didn't see after that."
Clara's body was pulled from the river and taken to a make-shift morgue.  She later recalled,

I heard men tramping on the floor and felt that I was lying on something hard and that my head was covered.  Then there was talk about taking the dead people away and I remembered the fire and the people drowning all around me.  I thought that I was still in the water too.  My stomach got sick--I had swallowed a whole bunch of salty water.  Then it began to gush out of my mouth, and a woman said, 'this little girl ain't dead' and she called 'Doctor! Doctor!' just like that.  They pulled the cover off of my head, and I began to feet much better and the air came to me.

Sadly, Clara's mother and sister did not survive.  George Gray, who was 13 years old, was saved by a tugboat.  He told a reporter, "I jumped onto the boat, and then a whole crowd of people jumped on top of me.  Half of them that jumped on the boat fell into the water between the tug and the steamer."  His young friends, Albert Greenwald and Otto Hands, both perished.
A month later Captain John McAllister of the tugboat Director was presented a gold medal studded with diamonds by the people whose lives he had saved.  Thinking that he was attending a birthday party at the Pilot Social Club, he was totally surprised.  The Brooklyn Daily Eagle reported that George Gray "made the presentation speech and in behalf of the survivors expressed their gratitude to Captain McAllister for saving their lives."
The house continued as a boarding house, with many of its residents being entertainers, like Frank and Pauline Berry, who formed Berry & Berry a "comedy musical duo."  They lived here in 1904.
After having owned the property for half a century, the Hallaway women sold 309 East 14th Street in September 1922.  Harry Wandermann paid $18,000--about $278,000 in today's money.  The neighborhood in which the Halladay girls had grown up was now p0pulated greatly by Italian immigrants.  Wandermann installed a store in the basement level, run by Guiseppe Scalia.
The roomers were less respectable by now.  In 1926 Pietro Stella was convicted of practicing medicine without a license.  In July of the previous year his uncle, Dr. Guiseppe Stella, had gone to Europe and Pietro stepped in to handle his patients.  Among them was Mrs. Rosina Loforte, who came in to have her left eye treated.  Stella told her the treatment would cost $350 and he accepted $50 on account.  It went horribly wrong and, as reported in The New York Medical Week, "Subsequently the eye was removed at one of the city hospitals."
Another roomer, Guiseppi Giordano, was arrested on September 2 that year.  The Newburgh News said he "is known as 'the sheik of Fourteenth Street' and lives up to his sobriquet by wearing sideburns and slicking back his glossy black hair."  He was at a dance hall on 14th Street and Third Avenue when police arrested him for "robbing the apartment of Reginald Sturges, a lawyer, of 12 West Fifty-fifth street."  The article explained that while Giordano "spends his evenings in dance halls," by day he was employed by the Victory Window Cleaning Company.  While washing windows, Giordano was able to enter apartments and steal jewelry.
Rose Ferron lived here in in 1931.  The New York Sun said she was "known as 'Princess Rajah' in vaudeville."  Ferron operated a fortune telling studio at 218 East 14th Street where she hired seers.  Undercover detective Margaret Brennan went there on December 10, 1931 and paid $1 to have her fortune told by Florence de Quatto.  "Using tea leaves as her medium, Miss de Quatto did the actual forecasting, said the policewoman, and Miss Ferron collected the money."  Both women were arrested for fortune telling.
The once-proud residence was remodeled in 1938.  The stoop was removed, the entrance lowered to the basement level, and the molded frames of the openings shaved flat. 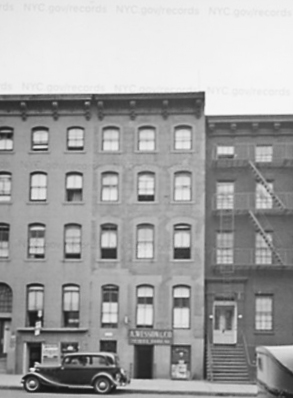 A tax photograph from 1940 shows the architectural vandalism of 1938.  via the NYC Dept of Records & Information Services
The Halladay house would be renovated two more times.  In 1978 it was converted to furnished rooms above the ground level floor.  Then, a restoration-renovation completed in 2017 resulted in one apartment each on the former parlor and second floors, and a duplex apartment on the top two.  Amazingly, the sympathetic remodeling included the refabricating of the molded window surrounds, and the installation of a period appropriate lintel above the entrance. 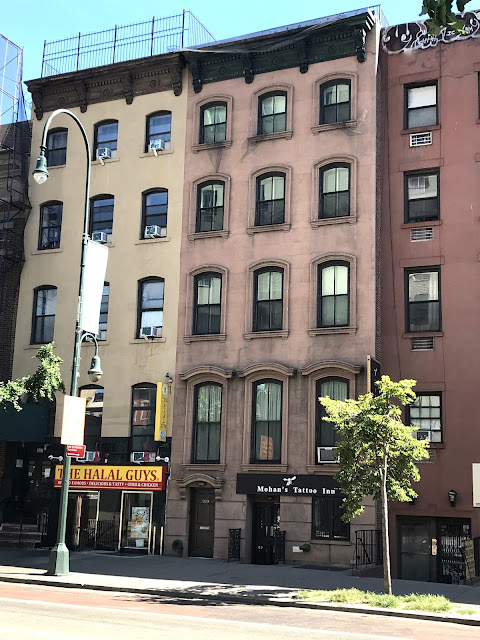