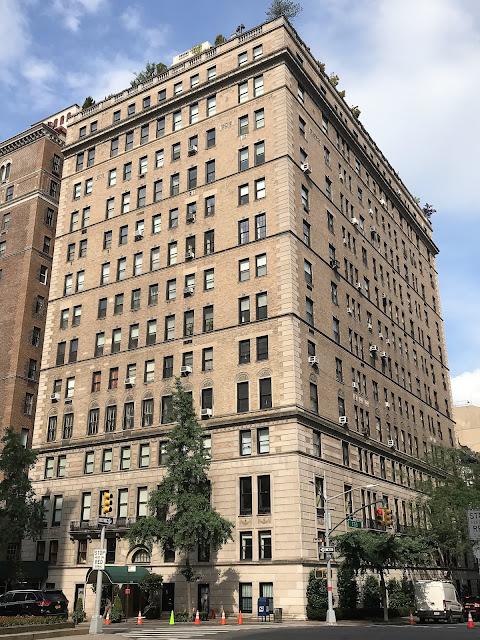 The carefree 1920's saw luxurious apartment buildings rising along Park Avenue, Upper Fifth Avenue and Central Park West.  In 1927 the newly formed 812 Park Avenue Corp. demolished nine rowhouses at the corner of East 75th Street and Park Avenue and hired J. E. R. Carpenter to design another.
Construction was completed before the end of the year.   Carpenter's tripartite neo-Renaissance design forewent ostentation in favor of quiet dignity.  Sitting upon a stone base sparsely decorated with carved swags, the upper floors were faced in beige brick.  In place of a terminal cornice, Carpenter crowned the building with a balustraded parapet.  His sedate design won him the 1927 Institute of Architects Apartment House Medal and Certificate for apartment houses over six stories.
The building was a cooperative structure from the beginning.  Its sprawling apartments, many of them two levels, had all the space and amenities of a private house without the worries of maintaining a large domestic staff.  An advertisement for 812 Park Avenue noted that a four-story house would cost $125,00 "plus a $100,00 mortgage," with operating expenses of about $15,000 per year.  An eleven-room suite at 812 Park Avenue, on the other hand, cost "only" $66,000 (about $983,000 today), with $6,600 annual maintenance costs.
Wealthy New Yorkers were convinced.  While the building was still under construction, leases were being signed.   On October 16, 1927 The New York Times reported that Peter Grimm, the president of the Real Estate Board of New York, had just purchased a duplex apartment.  "Other residents in the house will be E. H. H. Simmons, President of the Stock Exchange; William C. Breed of Bree, Abbott & Morgan; and Colonel Lloyd C. Griscom," said the article.  On April 5, 1928, the newspaper reported that stock broker Peter C. Maloney had purchased the "apartment occupying the corners of the thirteenth, fourteenth and penthouse floors," noting, "The apartment contains fourteen rooms and six baths." 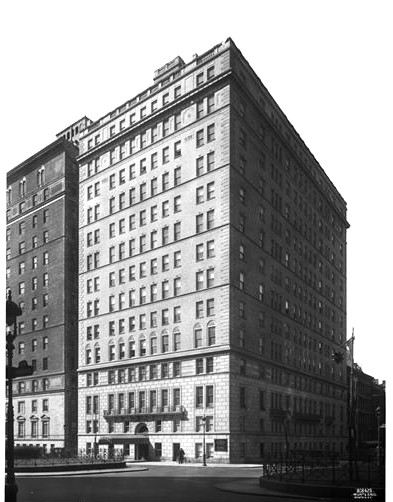 photo by Wurts Bros., from the collection of the Museum of the City of New York
Among the early residents were sisters Elizabeth and Virginia Nicholas.  Their widowed father, wine and liquor importer George S. Nicholas, had died on September 13, 1922.  The women had three brothers, George Jr., Ridgely (who lived in Big Horn, Wyoming), and Grosvenor.
When the women moved into 812 Park Avenue, the family was engaged in a bitter court battle.  Grosvenor had been a partner in his father's firm, but problems arose and Nicholas closed the firm.  The New York Times explained, "then the son engaged in the importing business on his own account."  The tensions between Nicholas and Grosvenor became obvious when the will was read.  Nicholas's $2.75 million estate (in the neighborhood of $42.5 million today) was divided in four parts, ignoring Grosvenor, who was disinherited "because of his unfilial attitude."  Grosvenor fought the will in court for eight years.  Finally, in August 1930 it was upheld and Elizabeth and Virginia received their significant inheritances. 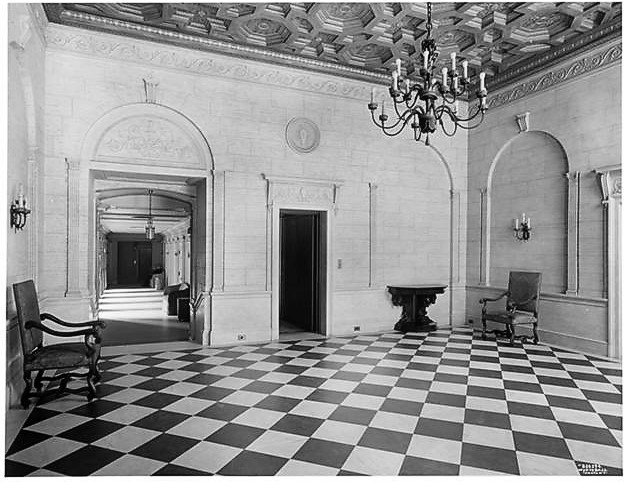 Decorated in the Renaissance period, the stone-walled lobby featured a coffered ceiling.  photo by Wurts Bros., from the collection of the Museum of the City of New York
Another unmarried resident at the time was Hardinge Scholle, the director of the Museum of the City of New York since 1926.  A 1918 graduate of Harvard College, he had earlier studied in Switzerland and Germany.  Following his service in World War I, he joined the staff of the Metropolitan Museum of Art, then briefly served as assistant curate of of the decorative arts department of the Chicago Art Institute.
When Scholle was appointed director of the Museum of the City of New York, it was located within Gracie Mansion.  (He later said that at the time he knew "just about as much about the history of New York as I knew about the history of Timbuctoo.")  He was responsible for the museum's relocation to its new building on Fifth Avenue between 103rd and 104th Streets.
Scholle's marriage to Elizabeth Klapp had failed.  But on April 23, 1930 The New York Sun reported that the 34-year-old was engaged to marry Eleanor Peabody.  The article noted, "The wedding is to take place the end of this month, and the couple will sail for Europe."  Perhaps the pair felt Scholle's eight-room, four bath apartment was too tight for two.  One week later the newspaper reported that Scholle had sold it to Mrs. J. B. Peake.
Merlin Hall Aylesworth was the initial president of the National Broadcasting Company, the only national network in the country when he took the role in 1926.  He and his wife, the former Blanche Minnie Parrett, had two children, Barton Jerome, born in 1910, and Dorothy, born in 1919.  The family's summer home, Dune Villa, was in East Hampton, Long Island.
Dorothy Aylesworth epitomized the young heiresses who lived at 812 Park Avenue.  On March 30, 1934, The New York Sun reported:

Miss Dorothy Aylesworth will give a dinner and theater party tonight for a group of the younger set at the home of her parents...This is to be a farewell party before Miss Dorothy returns to Miss Masters's School, at Dobbs Ferry, at the close of the Easter holidays.

After having spent the summer in Europe, Dorothy was introduced to society with a ball in the Starlight Roof Garden of the Waldorf-Astoria on November 24, 1937.  The New York Times reported, "The guests entered the roof garden through an avenue of formal trees, interspersed with tall vases of Spring flowers, which had been placed in the long foyer."
One year later, nearly to the day, Blanche Aylesworth hosted a "small tea," according to The New York Sun, for Dorothy, who was engaged to Robert G. Knott.  On November 25, 1938 The New York Times reported that Dorothy had completed the wedding plans, saying she "will have eighteen attendants" in the ceremony in St. Bartholomew's Church.  "A reception will be given at Sherry's."
Living in a 10-room duplex in the early 1950's were Leon Livingston and his wife Sara Rosen Parnis, who went professionally by Mollie Parnis.  In 1933 the couple had started a clothing firm, Parnis Livingston Inc.  Mollie's designs and her husband's expertise in fabrics made it a success.  In the 1940's Mollie Parnis began designing under her own name, and would become known for designing fashions worn by several First Ladies, including Mamie Eisenhower's inauguration suit.
On January 31, 1952 The Times Record of Troy, New York reported, "Jewel robbers struck the swank East Side again yesterday.  A three-man team looted fashion designer Mollie Parnis' Park Avenue apartment of $114,000 in jewels."  The burglars gained entrance by telling a maid that a package had been delivered to the apartment in error.  When she turned her back, they barged in.
They held two servants at gunpoint and locked Mollie and her secretary in a bathroom.  The newspaper recounted the designer's back-and-forth with one of them:
"Don't take my jewelry--it's hard to get," she pleaded.
"Yeah, but my mother needs an operation."
"If your mother needs an operation, I'll give you the money and won't tell the police," she said, directing him to a dresser drawer containing $1,500 in cash.
It turned out to be a foolish move.  The robbers took the jewels and the cash.  The heist netted them over $1.1 million in today's money.
Living here at the time were Bulgarian-born writer and playwright Michael Arlen, his wife, the former Countess Atalanta Mercati, and their daughter Venetia.  Known for his meticulous manners, The New York Times said of him, "He was admired and lionized in the fashionable circles of London and the Continent and enjoyed the prestige of a modern arbiter elegantarium on the latest styles in waistcoats and 'wisecracks.'" 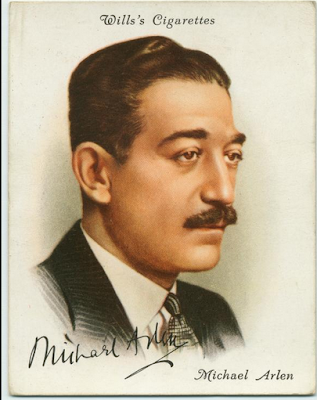 Arlen's fame earned him a cigarette card.
The social circles in which the Arlens moved were evident in Venitia's introduction to society on December 19, 1951.  The New York Times reported that her mother "gave an old-fashioned reception" in the apartment.  "At the tea table during the afternoon were Princess Kyril Scherbatow and Mrs. Philip Kip Rhinelander."  Other guests were Sir Cedric and Lady Hardwicke, Cole Porter and his wife, Mrs. Vincent Astor, Princess Aga Khan, the Paul Felix Warburgs, the Edward C. Delafields and many others.
Michael Arlen's health began to fail around 1955, and he died in the apartment on June 23, 1956 at the age of 60.  His widow spent each summer afterward in Greece, visiting her family (her parents were Count Alexander Mereati and the former Harriet Wright of Cleveland, Ohio).  She was in Athens in September 1964 when she succumbed to cancer.

Two views of a recently-sold apartment.  images for realtor.com
Like the other luxurious Jazz Age apartment buildings along the avenue, 812 Park Avenue never lost its fashionable prestige.  Among the residents in the early 2000's were Julian J. Aberbach and his wife, Anne Marie.  Their apartment was filled with European and Latin American artworks (as was their home in the Hamptons). 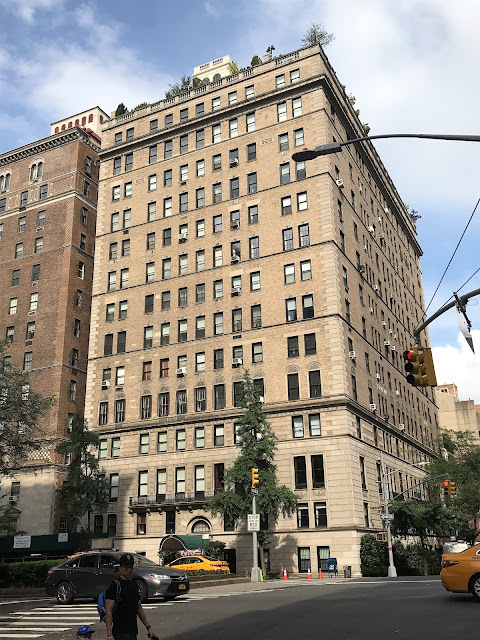 A co-founder of the music publishing firm Hill & Range, Aberbach had published the music of iconic artists like Johnny Cash, Edith Piaf, and Elvis Presley.  He owned the publishing rights to Presley's music when he died of heart failure in 2004 at the age of 95.  Following Anne Marie's death, her apartment was sold in August 2021 for $5.3 million.
photographs by the author
no permission to reuse the content of this blog has been granted to LaptrinhX.com
Posted by Tom Miller at 1:00 AM