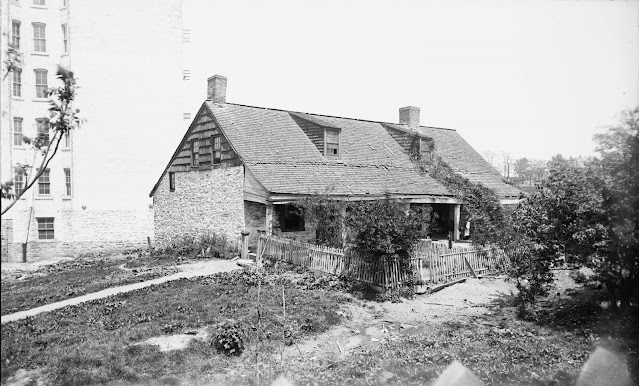 from the collection of the New-York Historical Society
Arent Harmans Bussing's name in early Harlem records appeared variously as Arent Hermens, Harmens, or Harmans.  Later he added his proper surname to property deeds.    He arrived in New Netherlands from Holland in 1639 "after the Thirty Years War," according to Cuyler Renolds in his 1913 Genealogical and Family History of Southern New York and the Hudson River Valley.  He originally purchased a farm in Flatbush, Long Island.
In 1673, following his marriage to Susannah Delamater, he relocated to New Haarlem, at the northern end of Manhattan.  That year he was named one of the five magistrates, or commissioners, of New Haarlem.  He acquired two "gardens," or farm plots, and built a house and barn.  The farmhouse, at what centuries later would be approximately Eighth Avenue and 147th Street, followed the Dutch model with a stone first story, a peaked roof that was longer at the rear, and shingled dormers and gable.  A full-length porch fronted the structure.
Two centuries later, the New York Herald would write: "It then stood in the midst of ample grounds, surrounded by outbuildings, quarters for the slaves, cider mills and vast granaries."  Historian Cuyler Reynolds wrote:

All the inside woodwork was of locust.  In the kitchen stood the old-fashioned Dutch oven by the side of the fifteen-feet-wide fireplace.  It was the house of that good man and righteous citizen, Arent H. Bussing, and was built on land which came through his marriage with gentle Susannah de la Mater.

A journalist from the New York Herald would describe the house on April 12, 1896 saying, "It was considered a marvel of luxury in those days, and was by far the most elegantly appointed home for many miles around."  A, perhaps, more accurate glimpse inside is contained in the 1903 Past and Present by Carl Horton Pierce.  He quotes a contemporary visitor:

The furniture goes but little beyond the practical and useful.  A gilded mirror, indeed, adorns the whitewashed wall.  The two beds have pillows and striped curtains...On one side is a small octagon table, and here [are] a brass candlestick and a warming-pan.  Upon hooks on the wall hang a musket and fire-lock.  No stove is there, but in the ample fireplace the wood crackles and blazes cheerfully above the huge back-log and around the two iron dinner pots, hung to the trammel by hooks and chain.

Arent and Susannah Bussing had three children: Peter, born in 1674; Harman, born the following year; and Harman 2nd, in 1677.   Bussing was prominent in the New Haarlem community.  In addition to his position as magistrate, in 1676 he was made corporal of the nightwatch, and he was an officer in the Reformed Dutch Church of Haarlem.
On April 17, 1694, following Susannah's death, he married Divertje Eva Lubberts and they would have six more children.
Over the decades, Bussing continually added to his property until, by the time of his death in 1718, his farm engulfed 127 acres.  His eldest son, Peter, who had married Rebecca Vermilye on June 7, 1700, bought out his siblings' interests in the farm.  He continued to enlarge the property.  The couple would have six children.  Peter died in 1737, "leaving his house and lands in Harlem to his son, Aaron," according to James Riker in his 1881 Harlem: Its Origin and Early Annals.  To his two other sons he gave farms in Fordham.
The Harlem estate inherited by Aaron Bussing now encompassed 201 acres.  It stretched from approximately 139th Street, between Seventh and Eighth Avenues, to 155th Street.  Born on October 21, 1730, Bussing was married to Maria Myer.  The couple had six children, four sons and two daughters.
With the Continental and British armies closing in on the Harlem district, the Bussing family fled the homestead around August 1776.  According to the New York Herald decades later, "There was fierce fighting on the Bussing Farm between the redcoats and Washington's Continentals."  The family did not return to their land until the British evacuated New York in November 1783.  One year later Aaron Bussing died there at the age of 81.
His heirs sold off the vast property.  The parcel containing the homestead was purchased by Aaron's and Maria's daughter, Catharine, who was married to Abraham Storm.
The house remained in the Bussing family throughout the coming decades.  Another Abraham Bussing lived in the house until around 1856.  It then became home to his daughter, Rebecca, who was married to Nathaniel Jarvis.  It passed to their son, Nathaniel Jarvis Jr.  By then the Bussing House was a rare surviving example of Dutch Colonial architecture in Manhattan.  An article titled "Historic Home and Landmarks" in the January 1889 issue of the Magazine of American History, mentioned, "The Watkins house has passed away, but the home of the influential Bussing family remains, and is a fine example of the practical application of certain principles of foreign domestic architecture to the requirements of a young and progressive people."
By the time of the article, the city was closing in on the venerable structure.  "The house originally stood on a gentle elevation," said the New York Herald, "but when Bussing's lane was transformed into Eighth avenue the grade was raised so that the old house was left in the hollow which it occupied for the latter half of its history."
Nathaniel Jarvis, Jr. did not live in the house.  Instead, he owned a sumptuous home at 62 East 55th Street in the fashionable mansion district.  The New York Herald noted, "Mr. Jarvis now has in his possession many interesting relics of the old place, and a grapeshot and British buttons found while ploughing on the farm." 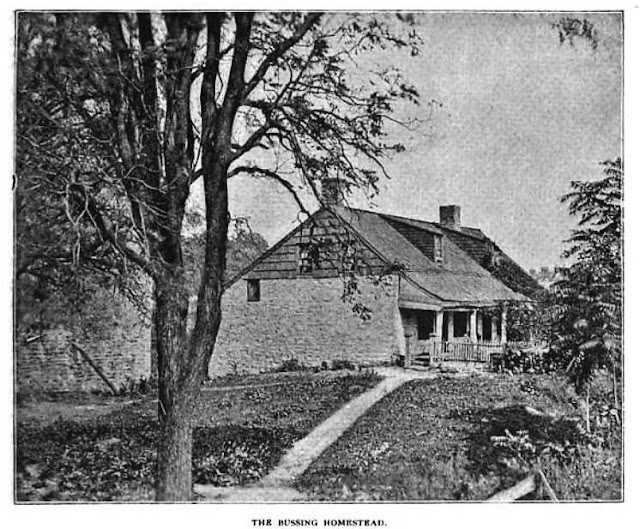 photo by Catharine Wood Barnes, Magazine of American History, January 1889 (copyright expired)
In 1889, Nathaniel Jarvis, Jr. was in serious trouble as the source of his luxurious lifestyle became exposed.  Several years earlier, the courts had put him in charge of the $100,000 estate of Bomanjee Byramjee Colah.  It was a significant amount, equaling more than $3 million in 2022.  Now, in October 1889, the co-administrator, Prescott Hall Butler, charged Jarvis with absconding with the fortune.
On December 26, 1889, The New York Times titled an article "Nathaniel Jarvis Must Pay Up."  The article said, "It was claimed by Jarvis that the money had been swallowed up in bad investments."  The Supreme Court disagreed.  "In the meantime, friends of Jarvis offered $60,000 as a compromise, but Joseph H. Choate...refused to receive less than $65,000, and Jarvis's friends finally agreed to pay this sum."
Just over six years later Jarvis sold his ancestral home to developer W. W. Shupe.  On April 12, 1896 the New York Herald entitled an article, "Bussing House Is Demolished," and wrote, "Another picturesque landmark of old New York disappeared a few days ago, when the ancient Bussing house, at Eighth avenue and 147th street, was demolished to make way for a row of modern apartment houses.  It was about the last of the ancient homesteads which but a few years ago were numerous in the upper end of Manhattan Island."
LaptrinhX.com has no authorization to reuse the content of this blog
Posted by Tom Miller at 1:00 AM